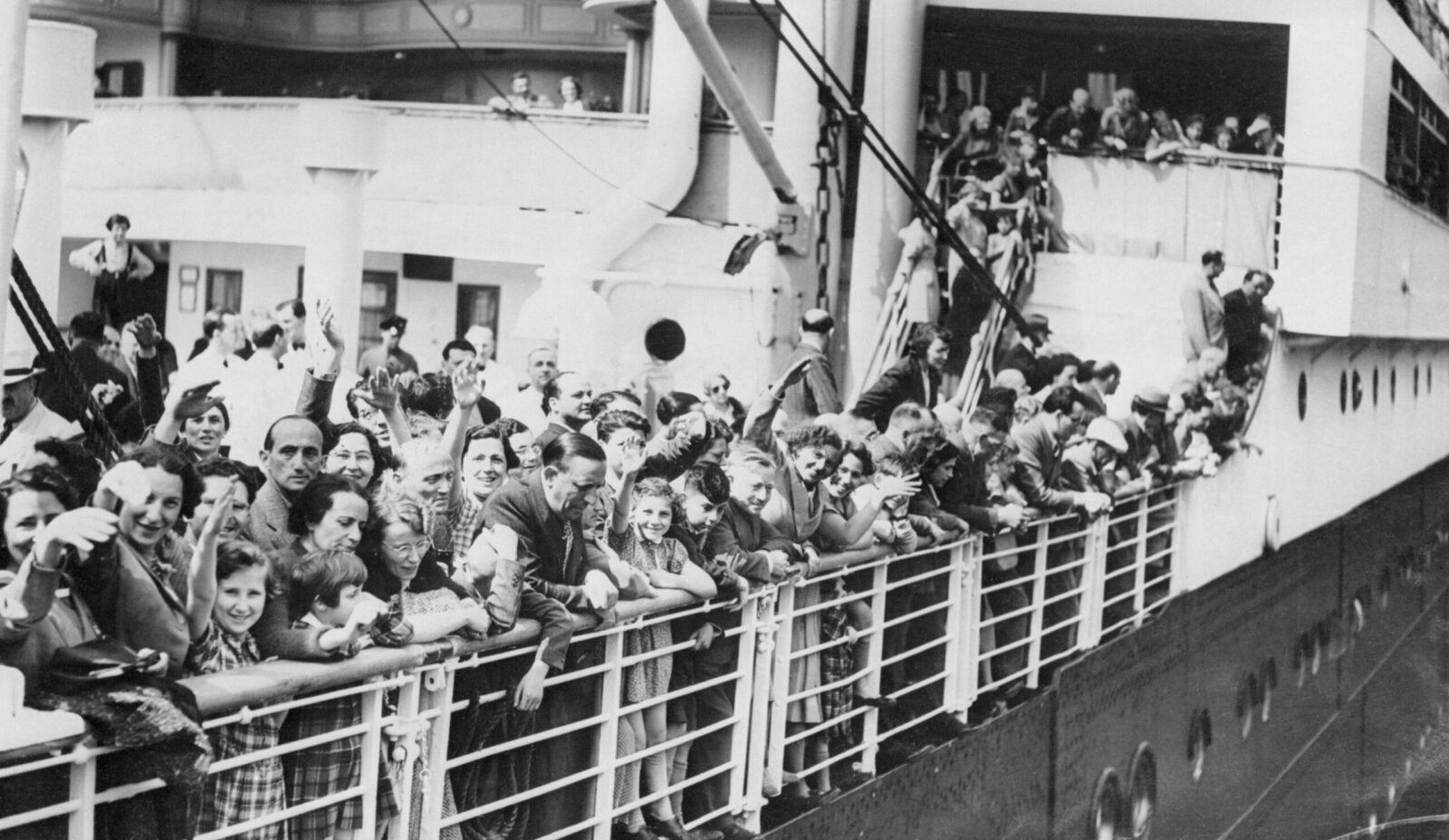 'This is not another film "'about the Holocaust,"' said filmmaker Lynn Novick. 'This is about America's response, America's obligations, responsibilities, failures'

In his deeply researched and lyrically paced documentaries about the Civil War, jazz, baseball, Thomas Jefferson and the national parks, among others, filmmaker Ken Burns has gone in search of the American character — what makes us Americans. Now that search has taken him to the Holocaust — not what happened in the killing fields of Europe but what happened on U.S. shores as those fleeing Hitler’s noose sought sanctuary in America.

The first few minutes of the new documentary Burns directed with Lynn Novick and Sarah Botstein, “The U.S. and the Holocaust,” which premieres on Sept. 18 on PBS, feature a familiar name and face, one known the world over after her diary, a chronicle of her time hiding from Nazi capture, was found and published in dozens of languages.

But Burns is betting that there’s a significant aspect of Anne Frank’s story — one that took place years before her family’s arrest in an Amsterdam annex — that many Americans may not know.

“We kind of disguise it,” Burns told Jewish Insider in a recent interview. “We call her Annalies, which was her given name and what [her relatives] refer to her as most of the time,” rather than using “Anne” at first reference.

After Hitler came to power in 1933, the Franks — whose German roots went back centuries — left for Amsterdam. Soon after arriving in the Netherlands, Otto tried to get the family to the U.S., the documentary reveals. He failed, and the millions of people who have read his daughter Anne’s diary know what happened next: She spent years in hiding in an Amsterdam attic, only to be murdered in a concentration camp with her sister.

“They would eventually try to seek a safe haven in the United States, only to find, like countless others fleeing Nazism, that most Americans did not want to let them in,” the narrator intones.

This statement sets the tone for the three-part series that clocks in at six-and-a-half hours. “I will not work on a more important film in my lifetime,” Burns said.

“This is not another film ‘about the Holocaust,’” said Lynn Novick, a frequent Burns collaborator who co-directed this film, along with Sarah Botstein. “This is about America’s response, America’s obligations, responsibilities, failures. What did the American people do and not do about this crisis as it unfolded?”

The idea for the project came from the U.S. Holocaust Memorial Museum in Washington, D.C., which was in the process of creating an exhibition — open now — called “Americans and the Holocaust.”

The museum approached Burns in 2015, a time when the political tides in the U.S. had begun to shift toward xenophobia and away from tolerance. “It was a really different world, in which the rhymes, if you will, the echoes of the story that we’re going to try to tell, seemed present but not overwhelming,” said Burns, referring to an oft-cited quote from Mark Twain that “history doesn’t repeat itself, but it often rhymes.”

“Now,” Burns continued, “almost every sentence of the film rhymes with the present in terrifying ways.”

The role of the U.S. during the genocide of 6 million Jews in Europe has long sparked difficult questions that have been debated by historians, humanitarians and members of the Jewish community. These questions are what prompted Burns and his team to examine the topic. After the release of their 2007 film about World War II, they would get bombarded with people asking: Was President Franklin Delano Roosevelt an antisemite? Why did the U.S. turn away the MS St. Louis, a ship with nearly 1,000 refugees — most Jewish — that ultimately had to go back to Europe? Why did the Allies not bomb the train tracks to Auschwitz?

The throughline in all these questions: Could the U.S. have done more? Unequivocally yes, the documentary argues.

“It’s pretty evident that we don’t want to help the Jews of Europe,” Burns said of the prevailing American attitude in the 1930s and 1940s. It’s a mentality that is evidenced, excruciatingly, in public opinion polling at the time, newspaper editorials, speeches at Yale’s isolationist America First Committee and much more.

But the story of the U.S. and the Holocaust, according to Burns’ documentary, begins well before Hitler’s rise in 1933, or the legacy of World War I, or any other historical markers that are usually tied to the Holocaust.

The filmmakers chart America’s approach to immigrants over the centuries, exploring Americans’ self-conception as a nation of immigrants and the reality that the hallowed gates to this country were, more often than not, kept under lock and key. They point back to irony at the birth of this nation, when immigrants seeking religious freedom arrived from Europe at the same time that Africans arrived via forced migration as part of the slave trade.

“From the beginning of the film, it’s just the American antecedents,” Burns said: “Anti-Indigenous population, nativism and anti-immigrant sentiment, eugenics, antisemitism, racism, the passage of the Johnson-Reed Immigration Act in [19]24 that followed on another act in [19]21 that essentially creates the quota system that is going to limit our ability to help bring refugees fleeing Hitler’s monstrous regime home.”

As the documentary turns to World War II, it dispels certain myths about the Holocaust, such as the oft-heard refrain that many Americans didn’t know the extent of Hitler’s murderous vision. That was true of many people, but the film makes clear that there was also at times an effort by some officials to obscure the true scale of the atrocities in Europe, because they knew most Americans simply would not care to help the Jews of Europe.

“Knowing all that, it kind of makes sense that if President Roosevelt had gotten up in front of the public and said, ‘We have to go over to Europe to save the Jews of Europe from being killed,’ what would the American response have been?” Novick asked. “Unfortunately, that would have been a hard sell.”

The documentary features notable historians, including Deborah Lipstadt, now the U.S. special envoy to monitor and combat antisemitism. It also includes the voices of several Holocaust survivors, as well as a recent interview with Ben Ferencz, who at 103 is the last living prosecutor from the Nuremberg Trials. When The U.S. and the Holocaust project began seven years ago, its creators knew that this period was the last time they would be able to interview survivors who remember anything of life in Europe.

But those survivors “also have to represent the people that didn’t get here,” said Novick. “I think that’s one of the challenges when you talk about survivors of a catastrophe on this scale, is that each of them actually represents an absence or a loss.” Those are the people whose story is really at the center of the film: The millions who died, and the hundreds of thousands who tried and failed to make it to the U.S., turned away by State Department bureaucrats and by a country whose Congress would not act to ease immigration restrictions.

“This is a huge reckoning that we have to understand,” Burns said. “The U.S. brought in more people than any other sovereign nation. But if we had done 20 times that amount, we would have failed.”

The documentary also tells some stories that push back on its gloomy narrative. There’s Raoul Wallenberg, the Swedish diplomat who rescued thousands of Hungarian Jews. In 1944, Roosevelt created the War Refugee Board at the Treasury Department.

“If you’re telling the story of the darkest chapter in human history, you also have to say that not everybody was subscribing to it,” Burns said. “There were bureaucrats, yes, who were sending, you know, millions of people to their deaths. Pencil pushers. But there were pencil pushers in the Treasury Department, [such as] John Pehle, who creates the War Refugee Board, which does more to save refugees than any other action taken by anybody in the Second World War. And it’s noble.”

Adding this nuance — the good with the bad, the inspiration with the heartbreak — is “part of telling a complicated story,” added Burns. Their goal was not to chastise Americans, but to urge viewers to consider how to learn from America’s inaction.

“It is probably not so productive to just judge and say, ‘I know I would have done something different,’” said Novick. She hopes viewers come away from the film with a more charitable understanding of who could be American, and what obligation we have to people who are different from us.

“We’re living in a time where we hear a lot about us and them. You know, ‘The other people, we can’t let them in, they’re not like us,’” she explained. “That was true then, it’s true in the 1850s, it’s going to be true 100 years from now. So I really hope we can get to a time when we aren’t so focused on us and them.”

Burns, for his part, argued that his job isn’t to make a political argument or tell viewers what to think. “We’re in the storytelling business,” he pointed out. “We’re not in the messaging department.”

But the film itself seems more than willing to impart a political message. It ends with a harrowing montage of recent events: the violent “Unite the Right” rally in Charlottesville in 2017, the mass shooting at the Tree of Life synagogue in Pittsburgh and the Jan. 6 insurrection, with a zoomed-in close-up of the man who wore a “Camp Auschwitz” shirt to storm the Capitol. Interspersed in this sequence is a news chyron about former President Donald Trump “surg[ing] in the polls,” and a quote from a Trump campaign rally in which he says, about undocumented immigrants, “My first hour in office those people are gone.”

“The institutions of our civilization are under tremendous stress,” said Daniel Mendelsohn, a Bard College professor who appears in the film to tell the story of his family who fled the Holocaust. “I’m not necessarily saying they’re gonna go in the same direction, but they could go in the same direction, because institutions are just conventions.”