Cori Bush’s opponent attacks her Israel stance, but his past votes raise questions 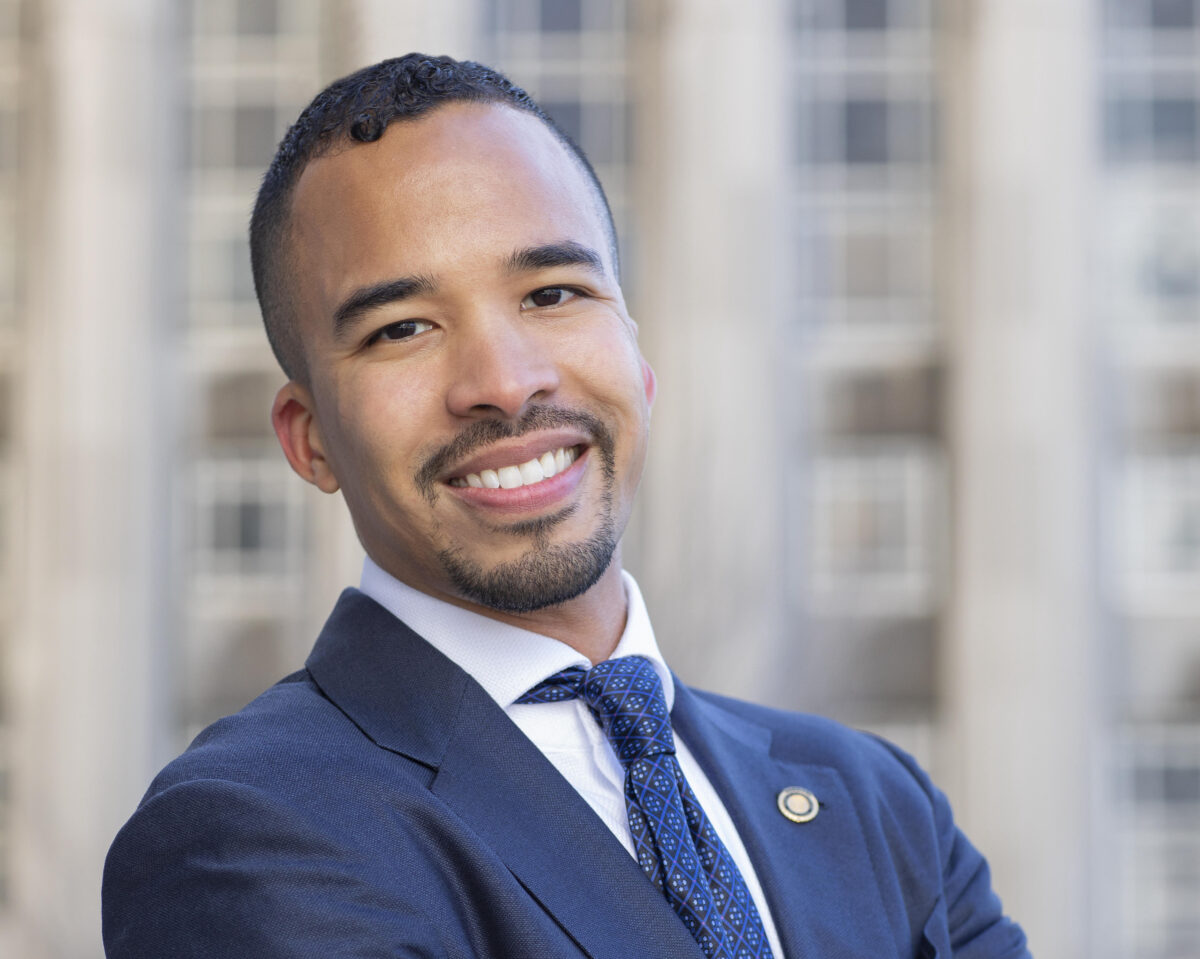 In his bid to oust Rep. Cori Bush (D-MO), state Sen. Steven Roberts is leaning on Bush’s criticisms of Israel and her vote against supplemental Iron Dome funding as a dividing point.

But Roberts’ own record — having voted multiple times against anti-Boycott, Divestment and Sanctions legislation — is raising questions about his stance on issues related to the Jewish state.

Bush, a Black Lives Matter activist who has become an outspoken voice in the House in favor of defunding the police, won an upset victory over longtime Rep. William Lacy Clay (D-MO) in the 2020 Democratic primary, ending a two-generation political dynasty and ousting a reliable pro-Israel vote. In the final stages of that primary, Clay issued a mailer hitting Bush for her “anti-Israel agenda” and support for the BDS movement targeting Israel. Clay is supporting Roberts.

In the primary, Roberts, who is also a former prosecutor, has been espousing a staunchly pro-Israel line, telling Jewish Insider that antisemitism and Israel are among “the most important issues at stake in this race.”

On his campaign website, Roberts pledges to “continue to honor our friendship with Israel while supporting peace initiatives that don’t jeopardize Israel’s national security.” He argues Bush’s vote against funding for Israel’s missile-defense system “jeopardized the lives of innocent Israeli civilians” and says her “public statements defaming Israel border on antisemitism.”

In January, Roberts spoke at an Israeli American Council meeting in Florida. In an op-ed in the St. Louis Jewish Light following that meeting, Roberts blasted the BDS movement as “discrimination” and a “hateful disinformation campaign” designed to “delegitimize, destabilize and eventually eliminate the State of Israel as the eternal homeland of the Jewish people.”

Yet, Roberts voted against anti-BDS legislation on three separate occasions in the Missouri House and Senate, over the course of multiple years and legislative sessions.

In a floor speech in the Missouri Senate in 2020, Roberts argued against one bill, saying that it would infringe on Americans’ rights and that it failed to distinguish between the BDS movement and individuals engaging in boycotts of Israel, repeatedly noting that the legislation did not specifically mention the BDS movement.

He drew parallels between boycotts of Israel and boycotts of apartheid South Africa, although he stopped short of accusing Israel of apartheid, and said that constituents had told him they were trying to “find a nonviolent way to protest a nation that’s engaging in oppressive behaviors.”

Roberts told Jewish Insider in late July that he would have voted differently if the bills had come up now, and said that “this wasn’t a bill that went through my committee; it wasn’t an issue that I was as familiar with as I probably should have been.”

He emphasized that he did not personally believe at the time of his 2020 speech that Israel was engaging in apartheid or “oppressive behaviors” but was relaying concerns that his constituents had expressed to him.

Roberts also indicated that he was misled about the intent and function of the bill that passed in 2020.

“What we were being told was that this was about an individual’s right to protest, telling folks what they can and can’t do,” he said.

He told JI that he now feels that state agencies and contractors should be barred from engaging in boycotts of Israel or engaging with the BDS movement. Roberts also attacked Bush for supporting the BDS movement targeting Israel while opposing and voting against sanctions on Russia for its invasion of Ukraine.

The state senator, who serves as the minority caucus whip, was set to travel to Israel late last year as part of a delegation organized by the America-Israel Friendship League and National Conference of State Legislatures, but that trip was canceled as a result of Israeli coronavirus restrictions.

As part of his shift on Israel policy, Roberts told JI he has met with a range of local Jewish leaders, including local rabbis, community leaders and members of the Jewish Community Relations Council of St. Louis.

Galit Lev-Harir, a member of the IAC’s St. Louis Regional Council, told JI she first met Roberts at the IAC conference and felt that his conversations there had had a major impact on his Israel policy views.

“I think that was really what was the first step in influenc[ing] him and coming to the understanding that he has today on policy toward Israel,” Lev-Harir told JI.

Lev-Harir said that Roberts had not previously been aware of the prevalence of Arabs in Israeli society or the role of the Arab Ra’am party in the previous Israeli coalition government, nor of the particulars of the security and governance situation in the West Bank and Gaza.

St. Louis JCRC Executive Director Rori Picker Neiss told JI that the group has collaborated with Roberts on a range of issues during his time in state government, particularly gun violence and criminal justice reform. She said that Roberts has also reached out to her and the JCRC to discuss Israel policy and that they have also connected him with other experts on the issue.

Nancy Lisker, the St. Louis regional director for the American Jewish Committee, told JI that AJC has not met or spoken with Roberts, but noted his shifting stance on BDS.

“He expresses support for Israel, however as a state representative he voted twice against the AJC-sponsored anti-BDS legislation that overwhelmingly passed the Missouri Legislature in 2020,” Lisker said. “More recently, he has spoken out against the BDS movement. We hope this change reflects an evolution of state Sen. Roberts’ views on this movement rather than a campaign strategy to curry favor with pro-Israel advocates.”

The 1st Congressional District’s new lines, which Roberts helped draw and voted on as a member of the state Senate, bring in greater portions of University City, where a significant portion of the St. Louis Jewish community resides. Roberts was accused during the process of seeking to draw a map that might favor him in a potential congressional run.

The St. Louis Post-Dispatch recently published an article revealing that Roberts previously dated Neveen Ayesh, a Bush ally and fundraiser who has come under fire for past stridently anti-Israel and antisemitic social media posts. Ayesh and Roberts dispute the details of the relationship — she said she dated him for two years, while he claims they “briefly dated” and he broke off the relationship when “her views became clear to me.”

The Post-Dispatch also shared a photo of Roberts taken by Ayesh in which he is wearing a necklace in the shape of Israel and the Palestinian territories, inscribed with “Palestine” in Arabic. Roberts told JI he did not recall the photo, that the necklace belonged to Ayesh and that he did not know what it said.

“Cori Bush is being paid by hate and she knows it… I chose to reject hate and walk away. I recognized that because I had been uninformed, I was vulnerable.” Roberts said in an open letter addressing his relationship with Ayesh. “Cori Bush has long known that many of her friends and supporters are anti-Jewish bigots.”

Roberts told JI that, in office, he would call out antisemitism when he sees it and engage more closely with the Jewish community than Bush has.

“At the bare minimum, it’s your obligation to listen and hear them out,” he said.

Bush met earlier this week with leaders of major Jewish organizations in the city, but did not discuss Israel or antisemitism.

Asked by JI to elaborate on his position from his campaign website on potential “peace initiatives that don’t jeopardize Israel’s national security” between the Israelis and Palestinians, Roberts did not offer specifics, emphasizing that “the main thing is you have to ensure Israel’s security.”

He said that the 2015 Iran nuclear deal did not go “far enough” but offered few specifics. He suggested that both the U.S. and Israel need to be “able to make sure that Iran is keeping up their end of the deal… checks and balances.”

Roberts’ campaign is being boosted by a group called Yachad PAC, which is being run in part by a non-Jewish Republican operative and is also linked to a former top Clay staffer. The group has received donations from Clay, Clay’s sister and the investment firm that employs Roberts’ father. The group also shares addresses with companies connected to Roberts’ family, according to The Intercept. The group repeatedly failed to file required Federal Election Commission disclosure forms earlier this year.

National pro-Israel PACs have not stepped in to boost Roberts’ campaign and did not comment when asked about the race by JI.

Roberts trails Bush by a wide margin in fundraising, having brought in $397,000 to her $1.7 million, indicating that he’s likely in for a steep uphill battle to defeat her in the Aug. 2 primary election.

Bush’s campaign has also frequently attacked Roberts over two past allegations of sexual assault, one of which he settled for $100,000.

Outside of Jewish and Israel issues, Roberts told JI that he’s challenging Bush because he feels her record has been harmful to their community.

“Cori Bush does not represent the values we have here in St. Louis,” he said. “She’s gone from the point of indifference to actually causing harm to the growth and development of the region.”

He pointed specifically to her vote against the bipartisan infrastructure package, which Roberts argued provides badly needed aid for remediating lead pipes and repairing roads and bridges; her opposition to Pentagon funding, including for a defense manufacturing facility in the St. Louis area; and her failure to support a bipartisan initiative by the Missouri delegation to preserve manufacturing jobs in the district.

He also blasted her for her support for defunding the police, explaining that crime and gun violence are the top issue for voters, and arguing that Bush’s position is “a catchy slogan” rather than a nuanced reform policy.

“This is someone who just really seems more interested in her social media following as opposed to the actual real work that needs to be done,” he said.

Roberts pledged that he would work in a bipartisan fashion in Congress, outlining his top issues as abortion rights, gun control and educational and job opportunities.

He criticized Democrats for failing to act faster and earlier to codify abortion rights, before the Supreme Court overturned Roe v. Wade. “It should not have gotten to this point,” he said. Congressional Democrats did attempt to pass abortion legislation prior to the Supreme Court’s ruling, but were stymied by opposition in the Senate from all Republicans and Sen. Joe Manchin (D-WV).

On Monday, Bush refused to say whether she wanted President Joe Biden to run for a second term. Roberts fired back, saying, “I support President Biden, full stop. Curious to know who Cori intends to support.”

Roberts recounted a story from his time as a prosecutor that he described as having helped shape his later work on education issues, including championing legislation to create high schools for adults. When Roberts was 20, he said he was involved in prosecuting a nonviolent weapon and drug offender who told prosecutors he was unable to read or fill out a job application and had a 10-year-old son.

The man asked Roberts, “What else can I do?” the former prosecutor recounted. “And I didn’t have an answer for him at that time. But it really stuck with me.”