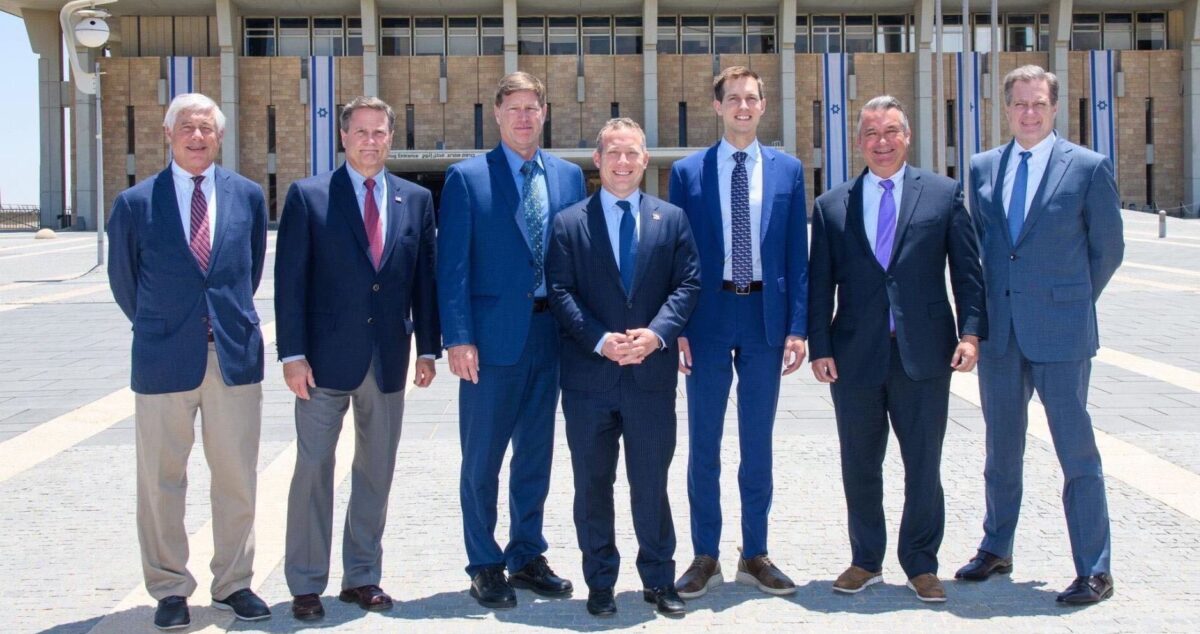 House legislators on an AIEF trip to Israel

Fresh off a recent trip to Israel, a bipartisan group of House lawmakers is urging President Joe Biden to use his trip to Israel and Saudi Arabia this week to promote and work to expand the normalization agreements between Israel and Arab states to include Saudi Arabia.

Five of the trip participants spoke to Jewish Insider last week upon their return to the U.S., each urging Biden to use his upcoming visit to seek prospects for expanding the Abraham Accords. The president is expected to be in the region from July 13-16.

“There are great expectations from every political group in Israel that the president is going to come to Israel and go to Saudi Arabia as an advocate for making headway and progress,” Turner said, adding that one of his takeaways from his visit was that Israelis feel the Accords “need greater attention from the United States.”

Upton said he plans to communicate to White House staff his support for “discussion that may lead to long-term peace in that region with other nations, as I know [the president] intends to pursue.”

“Probably doesn’t happen in the short term, but the stage is set,” Upton continued, “and we need to work together.”

Norcross said that the “idea of improving [Saudi] relations not only with the U.S. but with Israel is a worthy idea that has to be pursued,” particularly in the context of growing efforts both in the U.S. and the Middle East to establish an integrated air defense system to counter missile and drone threats from Iran and its proxy groups.

Auchincloss called Saudi Arabia “critical for Israel’s security and for contesting Iran’s funding of Islamic terrorism,” but said the U.S. also needs to remain “critical” of the Saudi regime for its “grim human rights record.”

He predicted that economic ties between Israel and Saudi Arabia might come “upstream of politics and security.” He added, “[Israel] has become a partner [economically and technologically] that Arab states just can’t afford to ignore.”

The lawmakers also praised the Abraham Accords, in their current form, as having brought about a sea change in the region.

“So much of Middle Eastern politics was basically the Arab states versus Israel, and that’s changed,” Auchincloss said. “The central dynamic is Israel and many Arab states versus radical Islamism, most manifestly expressed by Iran.”

Turner added that Israeli leaders “made it very clear that the partner nations are on bilateral bases working very diligently to implement the Accords and the economic benefits will be significant, in addition to the dividend of peace that sort of breaks the logjam of the Palestinian Authority having veto power over other nations in the Middle East having a bilateral relationship with Israel.”

Despite the current political turmoil in Israel, as the country heads to its fifth election in less than four years, the lawmakers — who were on the ground for the handover of power from former Prime Minister Naftali Bennett to caretaker PM Yair Lapid — said the overall mood among those with whom they met was positive.

“There was tremendous optimism in Israel, that everything is working very well right now, except for political unity,” Bacon said. The lawmakers pointed in particular to the Abraham Accords and connected economic prosperity in Israel as key reasons for this optimism.

“They think their politics is way too polarized and not stable enough,” Auchincloss agreed. “And I think all of them would say that politics is sort of the low point of the nation-state right now… but it is not casting the same pall of dysfunction that I feel like it is here in the United States, where what’s coming out of Washington is really dragging down so much else of what we want to do.”

Turner — the ranking member of the House Intelligence Committee — said that he found it “striking” that on the U.S.-Israel relationship, the Abraham Accords and Iran, all of the Israeli leaders the group met with “spoke as if they were from one party and one perspective.”

While the lawmakers were instructed by trip organizers not to discuss specifics about particular conversations with leaders, they described in broad terms a more aggressive Israeli strategy toward Iran.

“They’re not interested anymore in just responding to Hezbollah or Hamas,” Bacon said. “What I heard from the Israeli leadership was, ‘We’re going to go after Iran… Iran can’t think of themselves as being immune just because they’re using proxies.’”

“The repercussions” of Iranian proxy activity “are going to be felt in Tehran by the elite,” Auchincloss agreed.

The Iran nuclear deal is likely to be a hot topic during Biden’s time in the region.

“There was not a discussion with anyone that didn’t at some point have an in-depth discussion on JCPOA,” Norcross said, referring to the 2015 Joint Comprehensive Plan of Action, which the U.S. is seeking to rejoin after former President Donald Trump withdrew from the agreement in 2018.

The legislators who spoke to JI expressed some skepticism about or outright opposition to potential U.S. reentry into the JCPOA along the lines that have been outlined.

Auchincloss told JI that “any agreement that would lift sanctions but still allow centrifuges to be operational by two years from now would not be an acceptable agreement,” adding that delisting the Islamic Revolutionary Guard Corps as a terrorist group — a core demand of Iran’s that has stalled the negotiations — “would be a red line.”

In absence of an agreement, Auchincloss said, “you’ve got to delay and degrade their nuclear aspirations so that the regime falls before the bomb is built.”

“The Jewish people have learned the hard way that when extremists threaten to exterminate you, you’ve got to take them seriously,” he continued. “And we’re not going to permit this regime to get a nuclear weapon.” 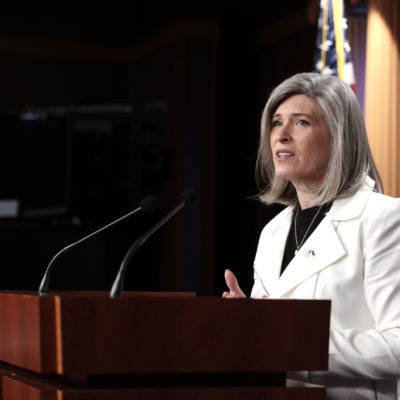 The lawmakers met with Lapid, Bennett and former Prime Minister Benjamin Netanyahu on the eve of the transfer of power and sat in on the Knesset session when the Bennett government was officially dissolved.

“It was remarkable, at that time, within 24 hours, having those conversations and the peaceful exchange of power, literally getting up and moving from one seat and switching to the other, embracing and then moving on, which is incredible,” Norcross said.

Discussing the scene at the Knesset, Norcross and Auchincloss — both Democrats — also alluded to the violence at the U.S. Capitol surrounding the transfer of power in 2021, with Auchincloss calling the Israeli handover “an important lesson for us as a bipartisan delegation of American congressmen.”

Auchincloss said he saw the changes in regional Arab-Israeli dynamics mirrored within Israel, with the inclusion of the Ra’am (United Arab List) in the recently dissolved coalition.

The Massachusetts legislator, who signed onto a letter in May calling on the administration to halt the evictions of 1,000 Palestinians in the Masafer Yatta region of the West Bank, said that after the trip he has a “much more granular understanding” of the “geographic and political reality of the settlements.”

Auchincloss criticized “settlements that are illegal under Israeli law” as an “aggravating force” which could also harm the goal of advancing Arab-Israeli relations, but added that many current Israeli settlements would likely have to be incorporated into Israel’s borders under a final-status agreement between the Israelis and Palestinians.

“The potential deal is pretty clear — 80% of the settlements are on like 4% of West Bank land, and a huge portion of the population that’s living there. Clearly that’s going to have to go inside the Israeli… border,” he said. “What to do with the other 20% needs to be worked out as part of the final-status agreement. The [Palestinian] right to return is probably much, much more challenging actually of an issue than much of the settlement stuff.”

Auchincloss told JI last month that he had signed onto the evictions letter because he is a “proponent of shrinking the conflict” and believed that conducting the evictions “aggravates and widens it.”

Bacon said he challenged some PA leaders on why they had not accepted previous efforts to advance a two-state solution “with most everything [they] wanted” and asked “what’s it going to take to get you to a spot where you can make peace?” But, he said, the officials “evaded” the question.

Turner said bluntly that “you can’t have a resolution” with the PA because it “doesn’t have authority or an ability to govern,” noting Hamas’ partial control over the Palestinian territories.

Auchincloss said the PA needs to “offer vision and hope” through “competent governance” and “neutralizing Hamas.”

Norcross sounded a note of optimism, saying “there is hope, there’s no question about it” and that Israelis and Palestinians alike are hoping that the president’s visit “might spur a break in the conversation.”

Upton — despite being a 35-year veteran of Congress and having worked on a range of Israel issues over the years — had not been to Israel before the recent trip. He said he gained a new appreciation of the “constant fear” that Israelis face from regular rocket attacks targeting the country, comparing it to “ever-present” fears domestically about mass shootings.

“It’s imperative that they have the proper security knowing that there are some people that want to make Israel into a rock pile,” he said.

Bacon, a retired Air Force general who spent time in Israel during his military career working on joint missile defense programs said he was also “a bit floored” by Israel’s advances in air defense laser technology.

Turner, who is set to lead the House Intelligence Committee next year if Republicans retake the House, previewed plans for a “major trip” with committee members to Israel, Jordan and Egypt next year.