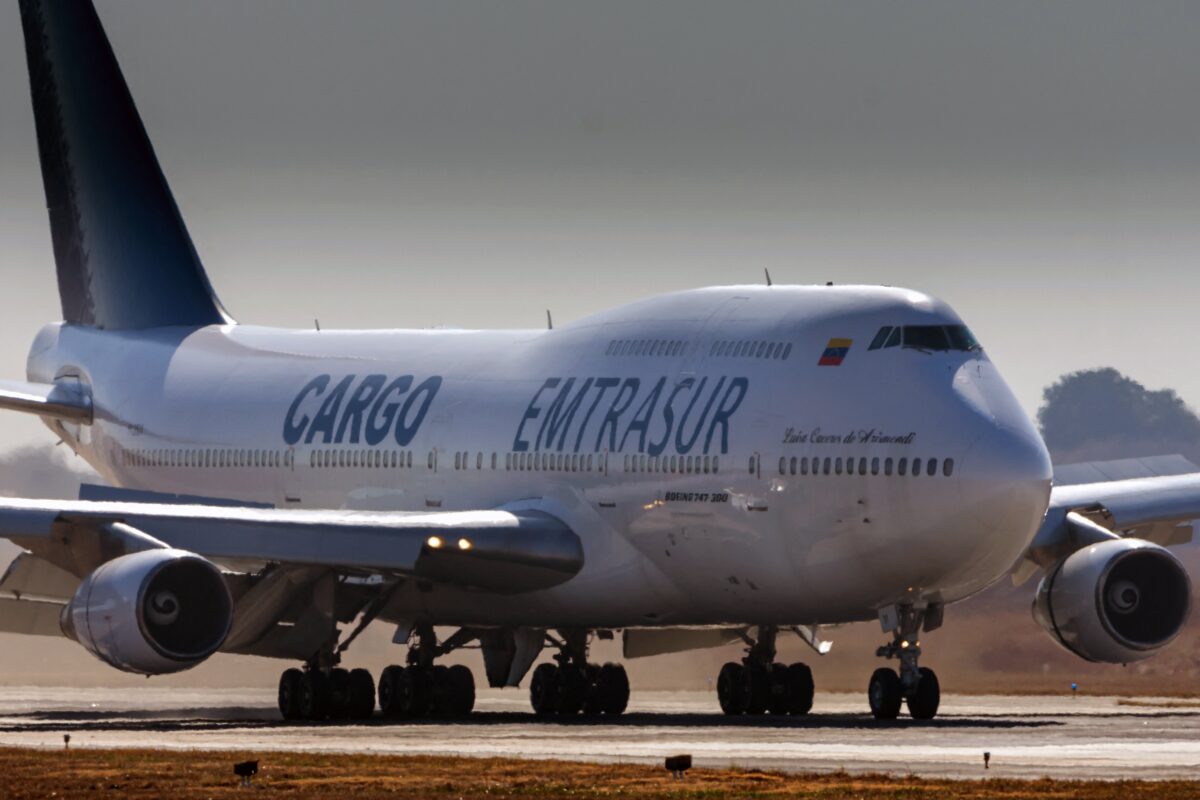 View of the Boeing 747-300 registered number YV3531 of Venezuelan Emtrasur cargo airline at the international airport in Cordoba, Argentina, on June 6, 2022, before taking off for Buenos Aires.

Twelve Senate Republicans on Tuesday accused the Justice Department of deliberately ignoring requests from the Argentinian government for information about potential Iranian espionage activity, in a new letter to Attorney General Merrick Garland.

The Venezuelan-owned jet was detained in early June in Buenos Aires, along with five Iranians and 14 Venezuelans who made up the plane’s crew. One of the plane’s pilots was found to be a senior official of the cargo airline Fars Air Qeshm — which has been sanctioned by the U.S. and used by the Islamic Revolutionary Guard Corps for logistical services.

Leaked information from that pilot’s phone has also indicated that he was a member of the IRGC Quds Force, according to regional press reports.

Emanuele Ottolenghi, a senior fellow at the Foundation for Defense of Democracies specializing in Iranian activities in South America, explained that the aircraft was previously owned by Mahan Air, an Iranian company that was put under U.S. sanctions for transferring weapons and personnel from Iran to Syria during Syria’s civil war, as well as moving illicit goods for Iran. The plane was transferred in February to a sanctioned Venezuelan state-owned airline and registered under a newly established subsidiary.

The Argentinian government, under a treaty with the U.S., has requested information from the Justice Department for its investigation. The senators claim that the DOJ has ignored the request.

The letter also raises concerns about what the lawmakers describe as DOJ’s “inaction” on the issue, and argues that the department may have information that could help confirm ties between the aircraft and its crew and the Iranian regime.

“The laws of the United States and the enforcement of those laws, in particular sanctions laws, are not optional. The uncharacteristic delay and lack of responsiveness by the Department of Justice suggests a prioritization of other parts of this administration’s agenda, such as negotiations over a new Iranian nuclear deal,” the letter reads. “This is unacceptable, as justice cannot be administered at the expense of political whims or sensitivities.”

The lack of response “raise[s] significant national security concerns” and could force Argentina to release the aircraft and its crew, the senators argue.

The letter demands “assurances” that the DOJ will deliver the requested information expediently and that the department will also “fulfill its proper investigatory and enforcement role” regarding the aircraft and its crew. It also requests that the DOJ brief congressional staff about the delay in the provision of information to Argentina.

An Argentine judge released the aircraft’s cargo on Tuesday, and reportedly lack the evidence to issue a formal indictment.

The DOJ did not respond to a request for comment.

The aircraft was first flagged as suspicious by Paraguayan authorities in mid-May before being inspected and detained by Argentinian authorities on June 8.

Paraguayan and Argentinian leaders have offered conflicting accounts as to whether the crew of the flight had links to terrorism: Paraguay’s president has said they are linked to terrorist activity, while Argentina’s president has denied that the plane was grounded due to IRGC links.

The U.S. Embassy in Argentina initially issued a statement that it planned to follow the Argentinian investigation closely.

“I’m getting tidbits from the Argentinians saying that ‘No, this agency is providing assistance, this agency is doing this. There is a team down there helping, decoding the electronic devices that were confiscated,’” FDD’s Ottolenghi said. “So it’s not clear whether the U.S. is not helping, or whether they’re helping, but keeping a very low public profile.”

He also noted that Paraguayan media reported on Thursday that the U.S. Embassy in Paraguay had commended the country’s president and intelligence minister for altering countries in the region about the plane.

Ottolenghi suggested that the U.S. could clarify publicly that the Venezuelan subsidiary to which the plane is registered is subject to U.S. sanctions, could sanction members of the crew and could publicly state that refueling or hiring the plane would violate U.S. sanctions.

“None of this has happened publicly, but I can’t tell you that this is not happening through diplomatic channels,” he added.

Ottolenghi explained that he views the specific cargo seized from the aircraft as less significant than its activity and crew.

He noted that the aircraft has been traveling to political hotspots — Myanmar, Karachi, Moscow, West Africa, Nicaragua, Cuba, Paraguay and Argentina — rather than key commercial locations. It spends days at a time on the ground — “significantly longer than a normal commercial operation” — racking up fees and crew pay at a rate that might outpace what the plane is earning for carrying cargo.

“When you look at the times on the ground, the value of the merchandise and the cost of travel and the composition of the crew, my theory is that we need to look at is less focus on the cargo itself and more on who they’re meeting and what they’re doing while they’re doing the ground,” he said.

“In other words,” Ottolenghi continued, “I think the cargo operation is a disguise, to allow senior operatives from both [the Iranian and Venezuelan] regimes to travel freely around the world under the disguise of being a crew.”

He called the presence of the senior Fars Air official on the crew especially suspicious.

“You don’t need such senior personnel if all you’re doing is bringing in and out merchandise, even deliveries of sensitive technology,” he said. “So it must be that they need that personnel there for human contact. So that’s why I think that’s the most plausible reason why this operation is happening.”