Which Republican will take on top GOP target Josh Gottheimer? 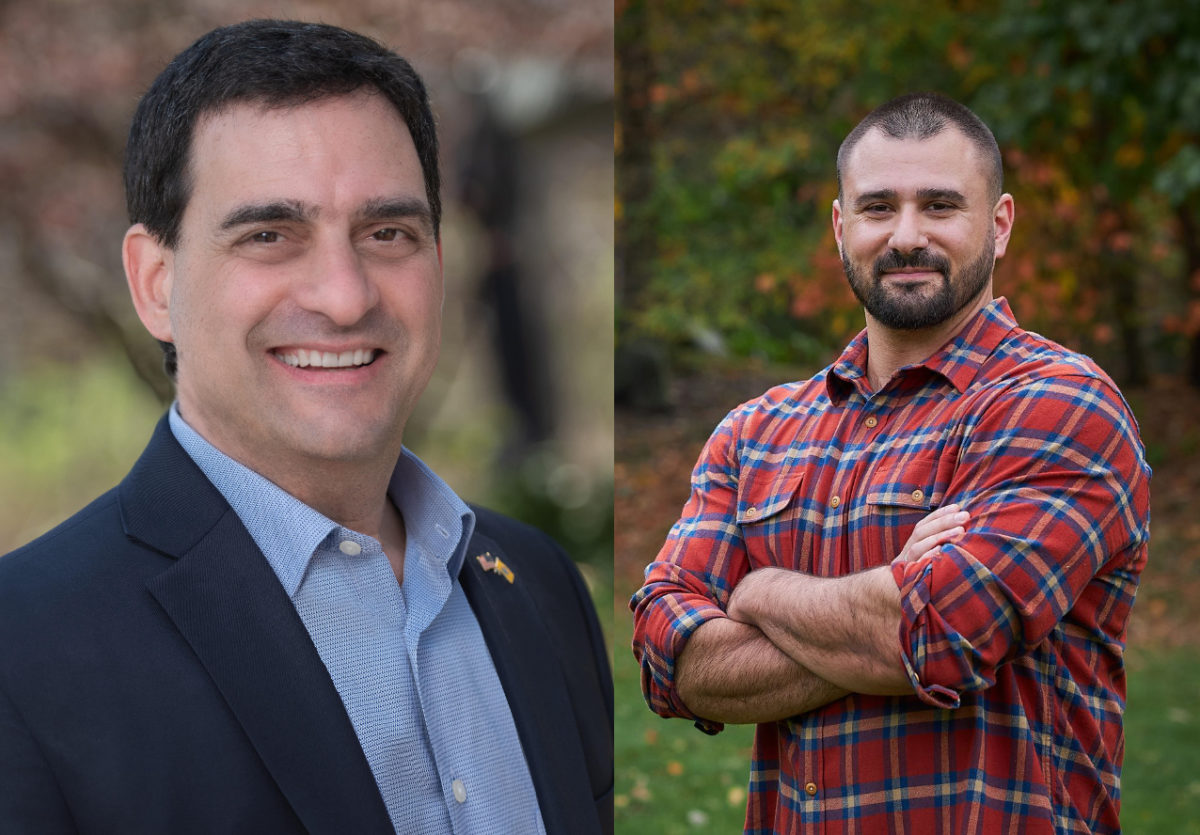 Since flipping his district in 2016, Rep. Josh Gottheimer (D-NJ) has been one of the more outspoken members of Congress, on issues ranging from infrastructure to Middle East foreign policy. His high profile — and national trends that favor Republicans this election cycle — have made him a top target for the National Republican Congressional Committee, and for local Republicans seeking to retake the seat.

Marine Corps veteran Nick De Gregorio and investment banker Frank Pallotta will square off in the Republican primary on Tuesday for a shot at taking on Gottheimer in New Jersey’s 5th Congressional District.

De Gregorio, who decided to jump into the race after American service members were killed during the Afghanistan withdrawal last year, told Jewish Insider last weekend that his run has been inspired largely by his children, as well as his military service.

“It’s not just about my kids, it’s about every subsequent generation of Americans,” De Gregorio, who served tours in Afghanistan, Iraq and the Pacific, said. “I think we have an obligation to make sure that we’re passing a better American on than what we found. And I do worry that we might be the first generation in American history that is failing to do that.”

Pallotta is aiming for a rematch against Gottheimer — he lost to the prominent centrist Democrat by around seven points in the 2020 election. He told JI that his background in finance is “what I think we need in this district, in the state right now,” adding that he wants to “put forth policies that actually benefit the country.”

“I do want to look to serve the community,” Pallotta said. “And this is the best way I can do it.”

The investment banker blamed his 2020 loss largely on the pandemic, which he said prevented him from campaigning in person. “You succeed by looking someone in the eye, shaking their hand and telling them you have their back,” he explained. “And we didn’t have the opportunity to do that last cycle.”

Pallotta argued that he’s the best candidate to take on Gottheimer — who has no Democratic primary challenger — because he has spent several decades working “in a sector that’s relevant to the issues that we’re having in the state right now,” and because he has remained on the campaign trail since his 2020 loss.

De Gregorio said that his is the more compelling narrative to compare with Gottheimer in the general election, contrasting his military service in his early 20s to Gottheimer’s career path, which included time as a staffer in the Clinton White House and as a political operative.

“I think in order to be successful in a general election, you have to be able to paint yourself as different, as new, as somebody who actually has a story to tell,” he said. “I believe that contrast is going to be sufficient to be successful, and I don’t believe my primary opponent is able to muster something like that.”

De Gregorio has picked up the support of the Bergen County Republican Party, where most of the district lies, and has been endorsed by Sen. Tom Cotton (R-AR). As of the end of the first quarter, De Gregorio had more than doubled Pallotta in fundraising, bringing in $837,000 to Pallotta’s $310,000. Pallotta has alleged that the Bergen County endorsement process was “rigged” and downplayed the endorsement’s significance in his interview with JI.

Dan Cassino, a political scientist and analyst at Fairleigh Dickinson University in New Jersey, told JI, “You have to assume that De Gregorio is the favorite just because the district is mostly Bergen County and he’s got the Bergen County line… northern New Jersey political bosses are still doing just fine and in general, they’re gonna get the candidate they want, and they’ve decided they want De Gregorio.”

“Pallotta is probably someone who appeals to the Republican base more, but the party recognized he’s going to have a harder time in the general election,” Cassino said. “[De Gregorio] is certainly seen as more of a threat.”

Gottheimer himself, as well as a super PAC of unknown provenance, have stepped into the GOP primary in what observers see as an attempt to boost Pallotta by tying him closely to former President Donald Trump — indicating that Gottheimer and other Democrats view Pallotta as the lesser threat in the general.

In 2020, Pallotta received a last-minute endorsement from Trump, but the ex-president has not weighed in on this year’s primary.

Asked about Trump’s signature bête noire — the 2020 election results — both candidates acknowledged that President Joe Biden is the sitting president, but neither would say definitively that they felt he had won the election fairly and both declined to say whether they would have voted to certify contested electoral results on Jan. 6, 2021.

Pallotta said he had not “looked at it enough” to know whether he would have voted against certification if he had won in 2020. He added that he was concerned about New Jersey’s vote-by-mail policies in 2020 and said he did not know “whether there was enough fraud to have overturned the results of the election.”

“But it is settled. I think as a country we have to move forward,” Pallotta continued.

De Gregorio avoided engaging with the issue beyond saying, “Joe Biden is unequivocally our president of the United States.”

Despite poor headwinds for Democrats, the 5th District is rated as Likely Democratic by the Cook Political Report and Solid Democratic by Inside Elections for the general election. Gottheimer is a powerhouse fundraiser with $6 million raised and more than $13 million on hand.

“Gottheimer is pretty well-entrenched,” Baker said, noting that redistricting likely shored up Gottheimer’s chances by eliminating the more conservative Warren County. “Gottheimer is very good on constituent service, he does what needs to be done for an incumbent to be reelected… You can survive adverse trends if you’re really a high-quality member. You can get scared — your margin may be reduced — but you’ll survive.”

“If Gottheimer is facing a really high-quality candidate — in that case it’s De Gregorio — it’s going to be a very, very tight race. It’s going to be all about regional politics, trying to get better organization, trying to move people to turn out,” Cassino said. “The underlying question is whether a candidate who is basically conservative and Trumpy enough to win the Republican primary can also win that district.”

Speaking to JI, the two GOP primary contenders named different policy focus areas. Pallotta lamented the small business environment in the state in the wake of the COVID-19 pandemic, saying he would prioritize issues such as job and economic growth. De Gregorio’s principal issue is school choice, alongside tax rates and energy independence.

De Gregorio also called national security and foreign policy issues “very important to me,” noting that he received a graduate degree from Georgetown’s Edmund A. Walsh School of Foreign Service.

The Marine veteran said that it “makes no sense” to ask Israel to wait for Hamas — “a terrorist organization that continually says that they want death to Jews and death to Israel” — to negotiate, but called the Abraham Accords a positive step toward regional peace.

He said would support a negotiated settlement to the Israeli-Palestinian conflict “that our Israeli partners were spearheading,” but argued that it is not “the right or responsibility” of the United States to dictate what form that should take.

He added, however, that he “will support the effort to assist the Israelis and the Palestinians to reach a comprehensive and lasting peace, to be freely and fairly negotiated between those living in the region… without preconditions.”

“The world’s a better place when we can live in some measure of peace,” he said. “Peace starts with trust. And I don’t know if the trust is going to be there yet.”

Pallotta denounced the Boycott, Divestment and Sanctions movement, arguing that it “could be as damaging as any car bomb, as any explosion, as any missile” to Israel by removing it and its industries from the world stage. “That can affect a generation in a country… this is not an economic move, it’s a terrorist move,” he continued.

The two candidates appeared to diverge on the issue of humanitarian aid to the Palestinians.

“What we need to be doing is ensuring that everyone’s hierarchy of needs are being met,” De Gregorio said. “I certainly would never cut off aid to individuals who are in need of food or shelter.”

Pallotta did not express a firm position, explaining he was not “privy to why” the Biden administration decided to reinstate aid, but added that, in general, he was supportive of Trump’s Israel policy and viewed the Biden presidency as characterized largely by missteps.

The two candidates both opposed the 2015 Iran nuclear deal and current efforts to negotiate the U.S.’s reentry into it.

De Gregorio said that “stringent sanctions are the only path that we’ve got,” arguing that the Trump administration’s maximum pressure campaign failed to elicit significant changes in Iranian malign behavior because the 2020 election was on the horizon and the sanctions campaign was only in effect for a limited time under Trump.

“I believe that the Iranian people have started to realize the weakness of their own government, and I look to them to make decisions based upon their representation and to decide what’s best for them,” he continued.

Pallotta called for the U.S. to “do everything in our power to see that Iran doesn’t get a nuclear weapon,” later clarifying that he would not support American “boots on the ground” unless there is an imminent threat to the U.S. or Israel.

To combat domestic antisemitism, Pallotta said that hate crimes penalties for attacks targeting the Jewish community and other minorities should “have teeth in them.” He also said in his position paper he would work to codify the Trump administration’s executive order extending Title IX antidiscrimination protections to Jewish students.

De Gregorio said, “First and foremost, we need a return to the cultural norm that the police are there to protect us.” He also supports increasing security funding grants for synagogues and other religious organizations.

Both candidates said flatly that they do not see antisemitism as an issue within the Republican Party.

Looking toward the general election, Cassino predicted a heavy focus on national debates, rather than local issues.