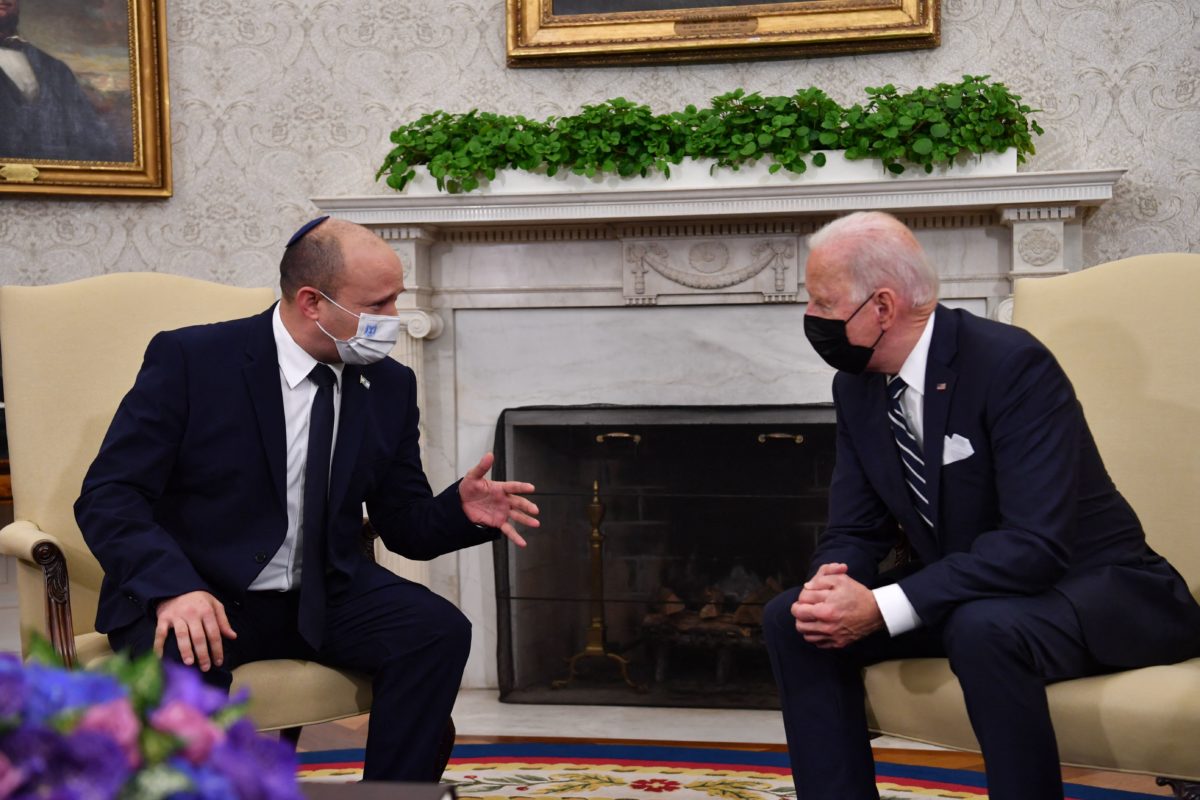 President Joe Biden meets with Israeli Prime Minister Naftali Bennett in the Oval Office of the White House in Washington, D.C, on August 27, 2021.

The political ground beneath the leaders of both Israel and the U.S. looks shaky.

In Israel, the year-old coalition government led by Prime Minister Naftali Bennett appears to be losing its grip on power amid several defections — including one from a member of his own party.

In Washington, President Joe Biden and the Democrats face a potential walloping in the midterms amid sky-high inflation.

But despite political turbulence at home in the U.S. and the Middle East, the state of the U.S.-Israel relationship is strong, experts agree. And they credit Bennett and Biden with working to calm the once-rocky waters of a relationship that had in the past been driven by strong personalities in both countries.

“The first year has brought about a complete makeover of U.S.-Israel bilateral ties,” said Scott Lasensky, who served as a senior adviser to former U.S. Ambassador to Israel Daniel Shapiro.

Biden and Bennett do not have a close personal relationship, although Biden has traveled to Israel many times throughout his career, with another visit to Israel reportedly planned for next month. Instead, both leaders have deputized their respective cabinet members to form close working relationships that have rarely drawn headlines.

After meetings between American and Israeli officials, both sides generally release readouts describing the close security coordination between the nations and the ironclad U.S.-Israel bond. Leaks from either side on disagreements have been kept at a minimum.

“All the parties, both American and Israeli, deserve credit for managing the relationship without letting personality interfere with policy,” said Mark Dubowitz, CEO of the Foundation for Defense of Democracies. “You’re able to work through the disagreements, and some of the disagreements are profound, but you can do it quietly without a lot of fanfare.”

Disagreements between Obama and Netanyahu — on issues ranging from Iran to the Palestinians — were often public and persistent. Early in Obama’s presidency, he visited Egypt and gave a speech in which he vowed to support the Palestinians in their quest “for dignity, opportunity, and a state of their own,” which upset the Israelis. In December 2016, weeks before Obama left office, the U.S. abstained from a United Nations Security Council resolution that demanded Israel cease building settlements in the West Bank. The U.S.’ refusal to veto the resolution allowed it to pass in the Security Council.

As Obama’s administration negotiated the Iran nuclear deal, Netanyahu came to Washington in 2015 to address a joint session of Congress about why Israel strongly opposed the Joint Comprehensive Plan of Action. Netanyahu was invited by House Speaker John Boehner (R-OH), who had not informed the White House. Democrats in the U.S. viewed the speech as a slight against Obama, and some did not attend for that reason.

Then, Donald Trump became president and strengthened an existing friendship with Netanyahu. He pursued many policies that were long seen as priorities of the pro-Israel community in the U.S., such as moving the U.S. Embassy to Jerusalem. But many Americans who opposed Trump also opposed his strong-armed approach to Israel and his support for Netanyahu.

After Russia invaded Ukraine in February, the U.S. disagreed with Israel’s approach to the conflict and its slowness in showing support for Ukraine. Eventually, on Washington’s urging, Israel signed onto a UN resolution targeting Russia. Bennett sought to be a mediator between the countries, at times corresponding directly with Russian President Vladimir Putin. U.S. Ambassador to Israel Tom Nides has tried to quell reports of a dispute on the matter, saying in March that the Biden administration is in “hourly contact” with the Israelis on the war in Ukraine.

Biden has been more critical of Israel’s approach to the Palestinians than Trump, and has worked to halt settlement construction and advance peace prospects for the Palestinians. Israel has not stopped all construction, but the Biden administration approach of stern, targeted criticism coupled with collaboration has yielded some results.

“We’re going to see Israeli construction no matter what. I think the question is, To what extent does that construction happen and where does it happen?” asked Koplow. “I think there are clear signs that the administration has communicated its reservations to the Israelis and the Israelis have been receptive.”

On Iran, Bennett’s government opposes the Iran nuclear deal that Biden is intent on reentering, although negotiations have been stalled for several months.

“A lot of the perceived evolution in relations between the current and former U.S. administrations and Israeli governments is spin and theatrics, because the Biden administration has a clear political interest in making it seem like Israel’s position on the Iran nuclear deal has changed,” said Jonathan Schachter, who formerly served as an advisor to Netanyahu. “Israel’s government may have changed, but its opposition to the JCPOA is clear and the same as it was in 2015.”

The strong working relationship on display the past year may not continue if Israel’s political situation deteriorates and the country moves to new elections.

“It’s brought a sense of normalcy back to a normally crazy place,” said Dubowitz. “You’re not getting the same daily crises and nonsense that has gone on in the past. But how long that lasts — I mean, they’re holding it together by the skin of their teeth.”