talk of this town

Is D.C. Mayor Muriel Bowser in trouble at the polls? 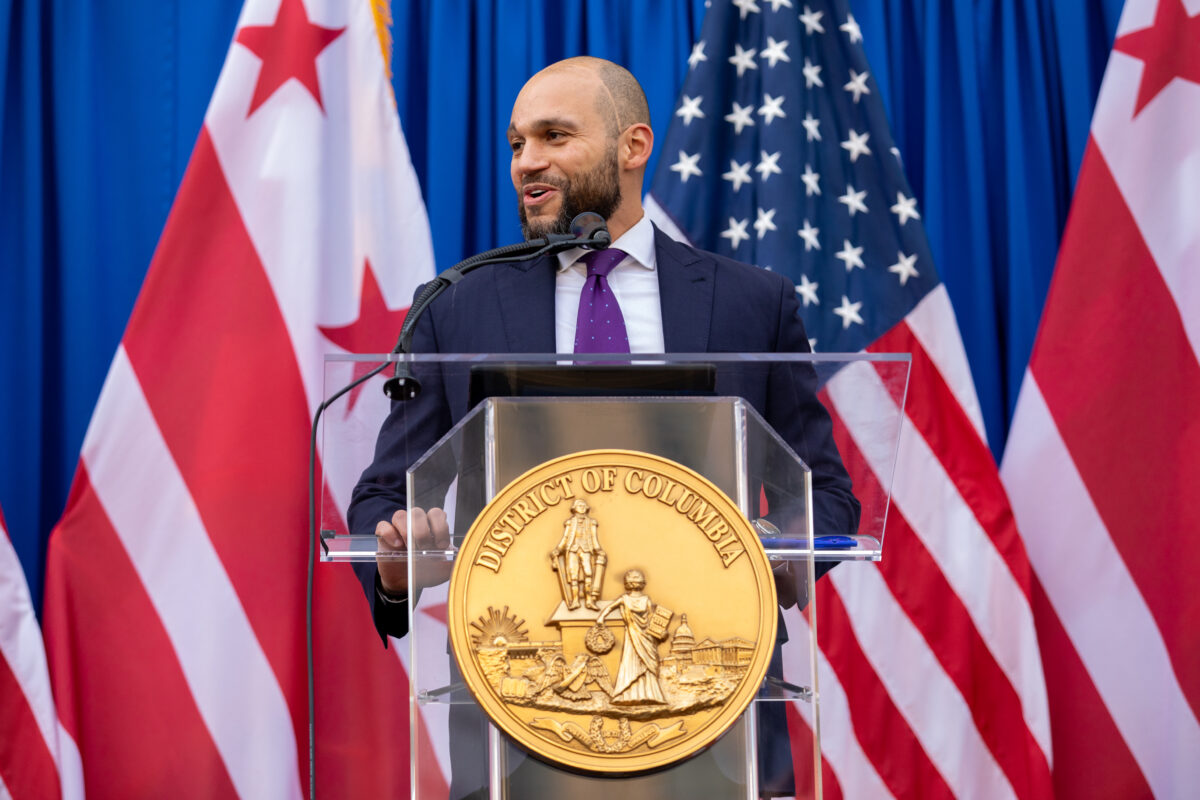 Robert White Sr. speaks after being sworn in as a member at-large of the Council of the District of Columbia outside of the Wilson Building in Washington, D.C., on Saturday, January 2, 2021.

People like to say that Washington, D.C., is a company town, only the “company” is the federal government. But residents’ excitement for politics and public service has not always trickled down to local elections. In the 2018 Democratic primary, which all but assures victory in the general election in the overwhelmingly blue city, voter turnout was less than 20%.

A surprisingly competitive mayoral race, with voters set to choose a Democratic nominee on June 21, could change that. Mayor Muriel Bowser, who is running for her third term, is facing a challenge from the left in Councilmember Robert White.

“This is a time in the city’s history where we should be making significant progress for the people and communities that have been left behind for decades, and we haven’t done that under Mayor Bowser,” White told Jewish Insider in a recent interview. “We are essentially treading water. We’re not moving forward.” (Bowser and another candidate in the race, Councilmember Trayon White, did not respond to interview requests.)

A poll commissioned by Robert White’s campaign earlier this month showed him just a few percentage points behind Bowser, with 41% of likely voters saying they intend to vote for Bowser and 37% saying they plan to vote for Robert White. His campaign heralded the result as a “statistical tie.”

If Bowser wins on Tuesday, she would be just the second mayor to serve more than two terms. (Marion Berry, the city’s most influential and infamous politician, served four terms as mayor in the 1980s and 1990s.) A February poll from The Washington Post showed that 58% of Washington residents approve of Bowser’s performance as mayor, down from 67% in 2019.

Several high-profile incidents in recent years have caused Bowser’s star to rise on the national stage. During the 2020 racial justice protests, after former President Donald Trump had federal agents clear out protestors so he could walk through Lafayette Square to a church near the White House, Bowser had the words “Black Lives Matter” painted in massive lettering on 16th Street outside the church. She renamed the two-block stretch “Black Lives Matter Plaza.” She made a renewed, but unsuccessful, push for D.C. statehood after Democrats regained power in Congress in 2019.

“D.C. is overwhelmingly Democratic in population and having someone stand up to Trump, which she could do as mayor of the capital, gave her a national profile and I think probably helped her with a lot of voters in D.C.,” said Matthew Green, who chairs the department of politics at The Catholic University of America. “This is part of a broader theme of D.C., which is having the national government kind of telling D.C. what to do, and elected officials in D.C. push back. That’s something voters want.”

Robert White served for several years as counsel to Rep. Eleanor Holmes Norton (D-DC), Washington’s non-voting member of Congress, before moving to a position with the D.C. attorney general. He was elected to an at-large seat on the City Council in 2016 in an upset victory that saw him unseat an incumbent. (Bowser, for her part, defeated an incumbent Democratic mayor when she was first elected in 2014.)

Rather than national political issues like statehood, what’s driving his campaign is concern for people like his family members, who have been pushed out of the city into nearby areas of Maryland due to gentrification and skyrocketing housing costs.

“Statehood didn’t didn’t factor into anything I’ve done politically,” White told JI. “The issues for me and for folks like my family were always much more basic.” His focus has been on building more affordable housing, getting people jobs and reforming public safety in the city.

“​​Most of my family has been displaced for financial reasons over the past 20, 25 years,” said Robert White, 40, who has lived in every quadrant of the city and now resides in Shepherd Park, in Northwest D.C. “My dad and the rest of their siblings, my siblings, my cousins, have all been priced out of the city at this point.” All three candidates were born in Washington.

Bowser’s reelection message seems to be one about stability and trust: She pulled the city through the COVID-19 pandemic, the Trump years and the Jan. 6 riot, so residents should trust her. Asked for five words to describe the state of the city, she told Axios: “Right track, ready for comeback.”

Responding to rising violent crime in the city has been a flashpoint between the major candidates, with Bowser, 49, calling for more police officers while Robert White has argued that the city needs to focus on preventing crime in the first place.

“Adding more police is not a plan. It’s a thing you can do. But if our goal is to make the city safer, then we have to focus a lot more on preventing crimes,” said Robert White, who rejected the notion that he supports defunding the police. “This is not a conversation about defunding the police. It is a conversation about adding city employees to do the things that we should be doing in the first place,” like mental health interventions.

Robert White earned the endorsement of Jews United for Justice, a progressive activist group. He has been a “consistent ally on progressive policy issues” and “will have the bold vision and political will to make transformative change in our city,” JUFJ said in its endorsement. (A spokesperson did not respond to a request for comment.)

As a 501(c)(3), the Jewish Community Relations Council of Greater Washington does not make endorsements in the race. But JCRC Executive Director Ron Halber told JI that Bowser has a very strong relationship to the Jewish community.

“JCRC does have an exceptionally close relationship with Muriel Bowser,” Halber said. He joined Bowser on a five-day trade mission to Israel in 2019. She has condemned the Boycott, Divestment and Sanctions movement, and in April, the city council — which both Robert White and Trayon White sit on — unanimously voted to adopt the International Holocaust Remembrance Alliance’s working definition of antisemitism.

Bowser has also engaged closely with the community; she spoke at Washington Hebrew Congregation on Yom Kippur in 2021 with Tom Nides, who was then awaiting Senate confirmation to be U.S. ambassador to Israel, and addressed a 2018 vigil at Adas Israel Congregation in the Cleveland Park neighborhood after the mass shooting at Pittsburgh’s Tree of Life synagogue.

“It was unbelievable what the mayor said, and I’ll never forget this,” said Halber. “She was speaking about how antisemitism is not the problem of the Jewish people, but it is the problem of non-Jews to not be antisemitic, and not to act or feel in such a way. And that was very, very reassuring for American Jews.”

Robert White told JI that he will work to build bridges between Washington’s diverse communities to help fight rising antisemitism and racism.

“One of the things that has really frustrated me as a Black man is seeing an increase in hate crimes, particularly against the Jewish community, because I understand very much the historic relationship that our communities have had in civil rights and racial justice,” he said. “People don’t have a full enough understanding of the historic bond between the Jewish community and the Black community, and it’s a very important one.”

In a voter guide published by the JCRC and Washington Jewish Week, Robert White said he hopes to address security concerns of houses of worship by appointing strong leadership to the city’s Office of Human Rights. He also said Jewish history and culture should be taught in Washington public schools.

Trayon White, who represents Ward 8 in Southeast Washington, did not respond to the JCRC/Washington Jewish Week questionnaire. (Neither did James Butler, a fourth candidate who lost to Bowser in 2018.) Trayon White has come under fire from the Jewish community for past comments widely seen as antisemitic.

In a March 2018 Facebook video, filmed in a snowy Washington, Trayon White suggested that Jews control the weather. “Man, it just started snowing out of nowhere this morning, man. Y’all better pay attention to this climate control, man, this climate manipulation,” he says. “And D.C. keep talking about, ‘We a resilient city.’ And that’s a model based off the Rothschilds controlling the climate to create natural disasters they can pay for to own the cities, man. Be careful.”

White later apologized and attended several events in the Jewish community, including a Passover seder. He went on a tour of the U.S. Holocaust Memorial Museum but left early.

“I think his history with the Jewish community speaks for itself,” said Halber. “I just don’t see him as a viable candidate.”

Roughly 670,000 people live in Washington, and Halber said he estimates that 30,000 voters are Jewish. The main challenge, he said, is mobilizing voters. “I think one of the biggest struggles is getting people to actually even realize there is an election going on,” he said.

The differences between the candidates are real, but there’s a limit to how widely they can diverge, Catholic University’s Green argued.

“This is the Democratic primary, so you’re not seeing the kind of dramatic differences in policy proposals that you would, say, see in a general election between a Republican and a Democrat,” said Green.

“Bowser, in some ways, represents — relatively speaking, the more moderate or establishment approach, which I think comes as much from her being the incumbent mayor. So you see other candidates, like Robert White, Trayon White, maybe suggesting more bold approaches, or nonconventional approaches to some of the problems that D.C. faces.”