Honoring fallen Jewish soldiers, one headstone at a time 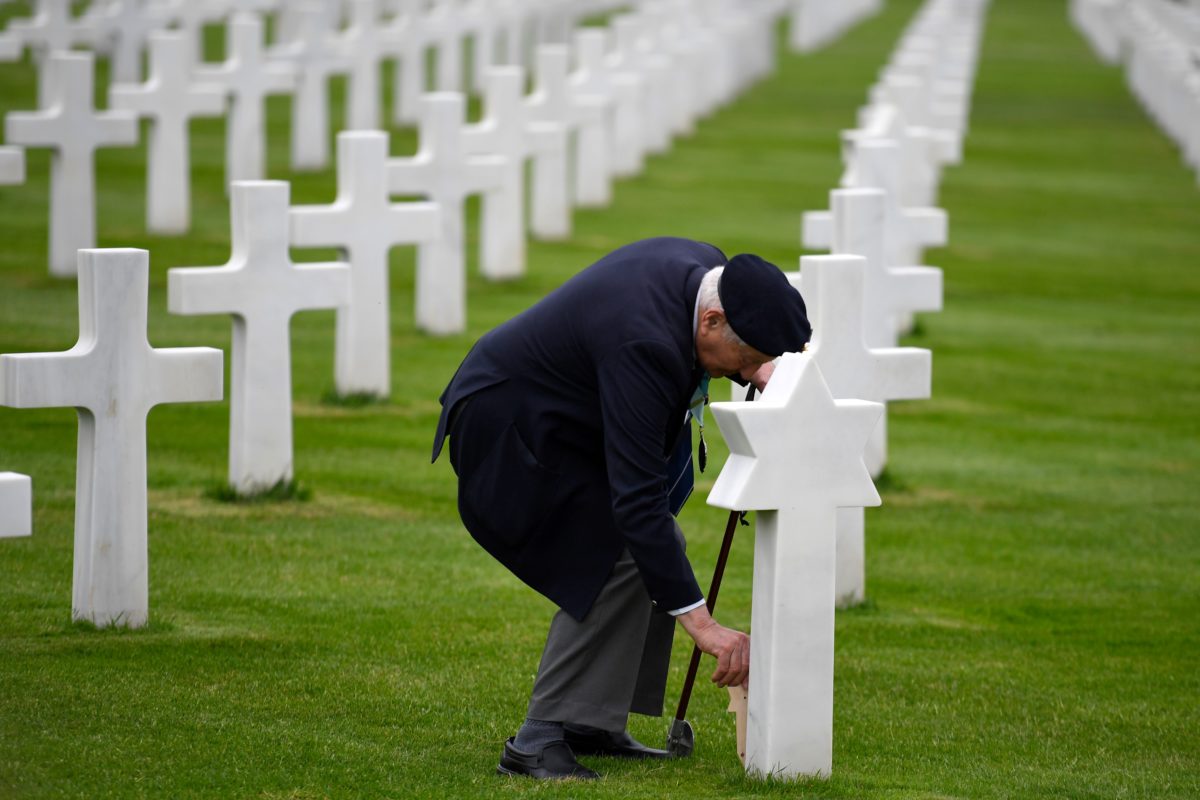 WWII British veteran Mervyn Kresh places a poppy on an inscribed wooden Star of David by a headstone after a remembrance ceremony at The Normandy American Cemetery in Colleville-sur-Mer on June 4, 2019.

In 2014, when Rabbi Jacob J. Schacter visited the American cemetery in Normandy, France, the Jewish historian saw firsthand the thousands of white stone grave markings aligned in neat rows, marking the final resting place for the American soldiers who had lost their lives during the  invasion of Normandy on June 6, 1944. Among the sea of crosses, a few Star of David tombstones stood out. But Schacter, whose father, Herschel, served as a Jewish chaplain in the U.S. Army and was among the liberators of the Buchenwald concentration camp, noticed the number of Star of David markings did not match the number of Jewish soldiers he knew had died on the beaches below.

The realization prompted the formation of Operation Benjamin, a group dedicated to recognizing the Jewish soldiers buried in U.S. military cemeteries worldwide, many of them under crosses. The group brought together historians and genealogists to sift through the names of long-dead soldiers buried in graveyards scattered across the globe.

But identifying the Jewish soldiers ended up being the easiest part.

“These are very important existential things. But here’s the kicker: No matter how good our research was, it didn’t matter, because a family member has to make the request” for the tombstone to change, Shalom Lamm, CEO of Operation Benjamin, revealed during an appearance on Jewish Insider’s “Limited Liability Podcast.”

“These young men who were killed didn’t have kids. If they had a sister, go find somebody whose last name [was] changed all these decades ago in an age before computers. It was really tough.”

Even after the family has asked for the headstone to change, such a request requires the approval of the U.S. government, which owns and administers the cemeteries.

So far, 19 soldiers have been approved for headstone replacements, with 16 of those already completed. After recent coverage in The Washington Post and The New York Times, the organization has started to garner more attention and more requests from families.

“All of a sudden, the last two weeks, we’ve been getting dozens of inquiries [from] people saying, ‘Hey, I’m 83 years old, my brother-in-law was killed. I have no idea where he’s buried. Can you help me find him?’ or we just got one yesterday, ‘My uncle was killed in the war, he’s buried under a cross, help me,’” Lamm said.

According to the best estimates of Lamm and his colleagues, between 450-550 World War II and more than 300 World War I American Jewish soldiers are incorrectly buried. “Knowing what we know now, knowing the process, we think we can get to them, we think we can do that.”

But more than advocates, Lamm says the organization has become a way for families to learn about long-passed relatives who died at a young age.

“We’re very often introducing the family to this relative, to this 19-year-old for the first time,” Lamm said. “We’re telling them all about his life and what he did and where he went to school and what his aspirations were, because we get that from the research.”