‘What [Tlaib has] demonstrated is not the politics of most of the people and the constituents that I represent here,’ Garrett told JI 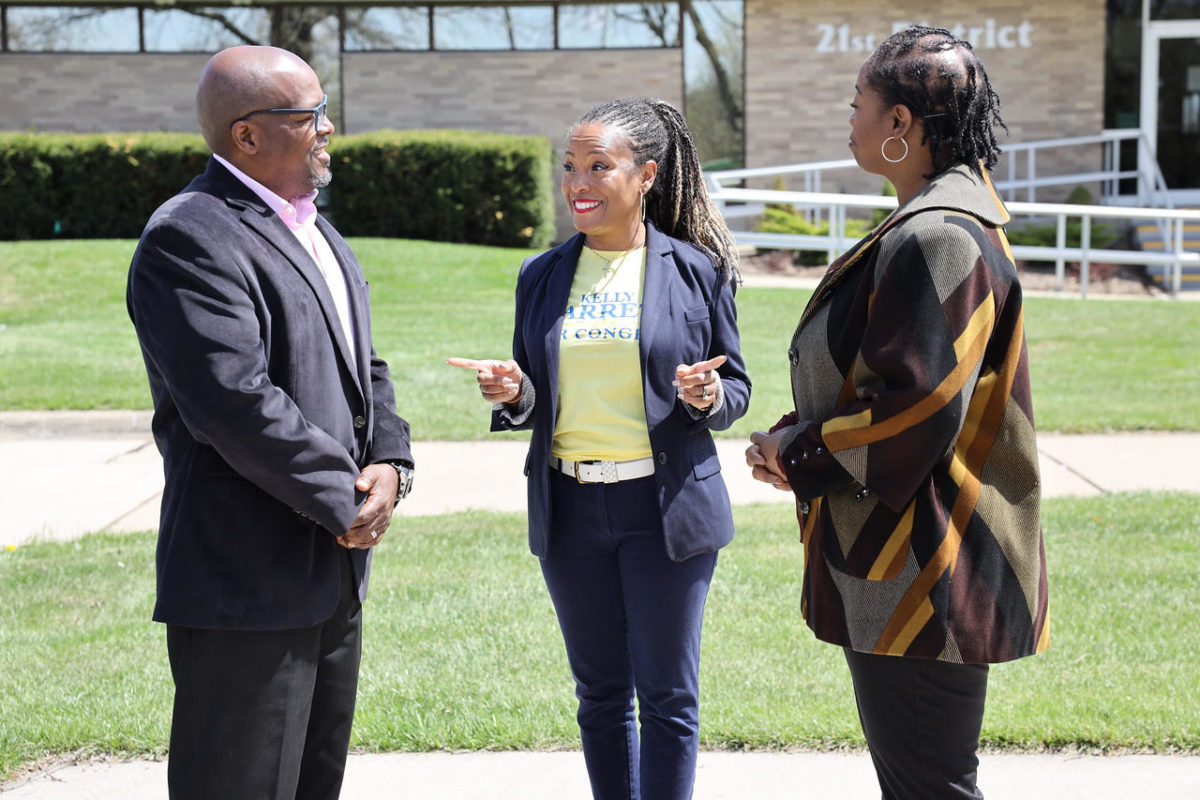 The Democratic primary race in Michigan’s 12th Congressional District became a three-way contest last month with Lathrup Village Mayor Kelly Garrett’s entrance into the race against Rep. Rashida Tlaib (D-MI) — a development that could shake up efforts to unseat the divisive incumbent.

“It’s nothing against Rashida personally, but I know that the politics that I have seen and what she’s demonstrated is not the politics of most of the people and the constituents that I represent here,” Garrett told Jewish Insider earlier this month. “You have some progressives that might be in our area, but it’s a wide range.”

Garrett said she’s had her eyes on Congress since 2013, but wanted to “get some more political knowledge under her belt” before making a run herself. She also was unwilling, in previous cycles, to run against Rep. Brenda Lawrence (D-MI), who currently holds the 12th District seat, but is retiring at the end of the congressional session. The newly drawn 12th District includes more than 60% of Tlaib’s current 13th District constituents.

“When I found out she was retiring I was ecstatic, especially in the fact that I might have the opportunity to represent the people that she was representing,” she said.

Garrett said her run was prompted in large part by her son’s death from sickle cell anemia in October 2021, which she said showed her the “disparity in treatment between people of color and everyone else.”

Garrett said in a recent virtual event that she had also suffered from a blood clot and pneumonia, but put off care until the situation became critical because she lacked health insurance.

She cited a series of concerns about Tlaib, including her decision to switch districts, her support for defunding the police and shuttering federal prisons and her vote against the bipartisan infrastructure package.

“We have major flooding issues. In my own house, it cost me $52,000 because of a flood that I had, so I need to make sure that that doesn’t happen to anyone else,” Garrett said of the infrastructure vote. “That’s no time to play politics.”

Garrett framed herself as a dealmaker, noting that her current position is nonpartisan.  “When it comes to our city, I know how to negotiate with my peers,” she said. “Though we might have two different outlooks on life, we can negotiate for the good of our constituents.”

The Lathrup mayor will not only have to defeat Tlaib in this August’s primary election, but also Detroit City Clerk Janice Winfrey, who entered the race in February, and former state Rep. Shanelle Jackson, who announced her candidacy earlier this year but did not officially enter the race until March. Winfrey has been endorsed by Pro-Israel America.

Garrett argued that she’s a stronger candidate than Winfrey because she is “doing the job, maybe at a smaller level, but I am fighting for infrastructure… making sure our police department is being reformed… and also the fact of trying to get small businesses to develop in Lathrup Village.” The village, which has a population of about 4,000, is in Oakland County, northwest of Detroit.

She also noted that she collects no government salary in her current role. “It’s not something that I’m doing just for a job or just for a title.”

Garrett said she’s been involved in communities around the district “regardless of if it’s an election year or not. It’s something that I’m just passionate about, helping people and showing up… to all of our local meetings, to our district meetings. And I can say that it’s been very few times that I’ve seen anybody else that’s running come to these types of meetings.”

The Lathrup mayor is currently playing catch-up in the fundraising race — Tlaib had $1.6 million on hand at the end of the first quarter and Winfrey had $221,000. Jackson has not yet reported fundraising totals. Garrett did not specify how much she had raised at the time she spoke to JI, but said she has a “plan in place” to get “exactly the amount that we need to win” before June 30, the next campaign finance filing deadline. Garrett began airing two television ads last Monday highlighting her career and policy priorities.

Adrian Hemond, a Michigan political consultant, told JI that Garrett has strong name recognition in “large parts of this district” but emphasized that her finances set her behind Tlaib and Winfrey, especially with absentee ballots for the primary race set to go out soon.

Hemond speculated that Garrett and Winfrey also risk splitting some support from Black voters in Detroit and the Jewish community, groups that have not traditionally supported Tlaib. There is a sizable Jewish community in Southfield, which is included in the new district.

“In order to knock [Tlaib] off, there’s a path to do that,” Hemond said. “But that involves a single candidate being able to unify those two disparate parts of a potential winning coalition. To the extent that they’re competing over the same voters, that’s not helpful to either one of them and trying to knock off Congresswoman Tlaib.”

To win, Garrett will likely have to make “serious inroads in Detroit and consolidate support in Southern Oakland County, where she’s from,” but if Winfrey locks down the Detroit vote, “that may or may not be enough to get her over the hump, but it would certainly freeze Garrett out,” Hemond continued.

Some pro-Israel donors affiliated with AIPAC organized a fundraiser for Winfrey before Garrett announced her campaign.

Garrett told JI she’s currently “learning a lot about” Israel issues. She supports security assistance to Israel and a two-state solution, and said that she found opposition to supplemental funding for Israel’s Iron Dome missile-defense system “disturbing,” given the system’s life-saving potential. Tlaib was one of nine House members who voted against the funding.

Garrett said that she supports security assistance to Israel and a two-state solution, and said that she found opposition to supplemental funding for Israel’s Iron Dome missile-defense system “disturbing,” given the system’s lifesaving potential. Tlaib was one of nine House members who voted against the funding.

Garrett said she’d also seek to bridge the divide between the Jewish and Arab, Iranian and Chaldean communities in her district to “have some type of reconciliation if possible,” “talk through the differences,” and “correct misinformation” about Israel.

She provided greater specificity on her approach to Middle East policy, which she described as shaped by current geopolitical realities as well as “a historical and spiritual perspective,” in a detailed position paper provided to JI following her interview.

“Israel is our longest term and most trusted partner in the Middle East, sharing the best American aspirations and values. As the only full democracy in the region, Israel is a genuinely multicultural society that serves as a beacon for what can exist in the region,” Garrett’s paper reads. “Ensuring that our ally remains safe and thrives makes American support for Israel’s security good American policy.”

Garrett denounced attempts to “impose [Palestinian] statehood” through international organizations and also condemns “rejectionist international movements” such as the Boycott, Divestment and Sanctions movement and the targeting of Israel at the United Nations and the International Criminal Court as “not constructive.”

Garrett argued that the Palestinians must take the first step toward a two-state solution by “returning genuinely to the negotiating table” and ending support for terrorism, including the Palestinian Authority’s payments to the families of terrorists. She also urged Israel to “demonstrate its commitment” by halting new settlement construction and ending discussions of unilateral annexation.

During her interview with JI, Garrett said she was not familiar enough with the specifics of Iran policy to “feel comfortable” expressing a definitive position, but anticipated that she would support President Joe Biden’s efforts to re-enter the 2015 nuclear deal. She revised that stance in her position paper.

In the paper, the congressional hopeful wrote that she supports a diplomatic agreement with Iran as “critical to immediate and lasting security” but outlined a series of conditions she wants to see added to a renewed nuclear agreement: it must also have a duration of at least 25 years and include “enforceable restrictions” on nuclear weapons technology and ballistic missiles, an end to Iranian support for terrorist proxies, a Sunni Arab signatory state and a recognition of “shared human rights” and Israeli sovereignty.

Garrett praised the peace agreements, including the Abraham Accords, between Israel and Arab states, but called for them to be expanded to include military and security partnerships, as well as Shia Muslim states.

To protect Jews in the United States from rising rates of antisemitic hate crimes, Garrett told JI that she supports “harsher penalties” for antisemitic incidents as well as improved education. The reason “most of the people that are racist or discriminate against people is because they don’t know any better,” she said.

“I truly feel very passionate about speaking out against it and having consequences to people that do have antisemitic type of undertones,” she added.

Garrett said she’s long held an affinity for the Jewish community, having grown up in Southfield in a “predominantly Jewish” neighborhood, celebrating Jewish holidays and learning about Jewish customs from community members. The Black and Jewish communities, she added, “have similar backgrounds.”

She also said that she’s personally been the victim of racist harassment, including vandalism at her house and receiving offensive messages online.

Bruce Cantor, Lathrup’s mayor pro tem, who is Jewish, told JI that Garrett “treats everybody the same. She’s very great at fostering diversity.” He added the village does not have a large, organized Jewish community, but “she’s got many friends that I can think of in the city, who are people who are active in the city, who are Jewish. She works well with everybody.”

He also described Garrett as a “very knowledgeable” about city government and a “very good person to learn from.”

“I think she would be great in Congress and just taking everything that she’s learned at the local level and taking it to a more national level,” Cantor said. “I think she’d be really good.”