U.S. warns Israel not to move on Sudan normalization

Following a military coup in October 2021, normalization with Israel has halted, leading to an awkward balancing act for Israel and the U.S. 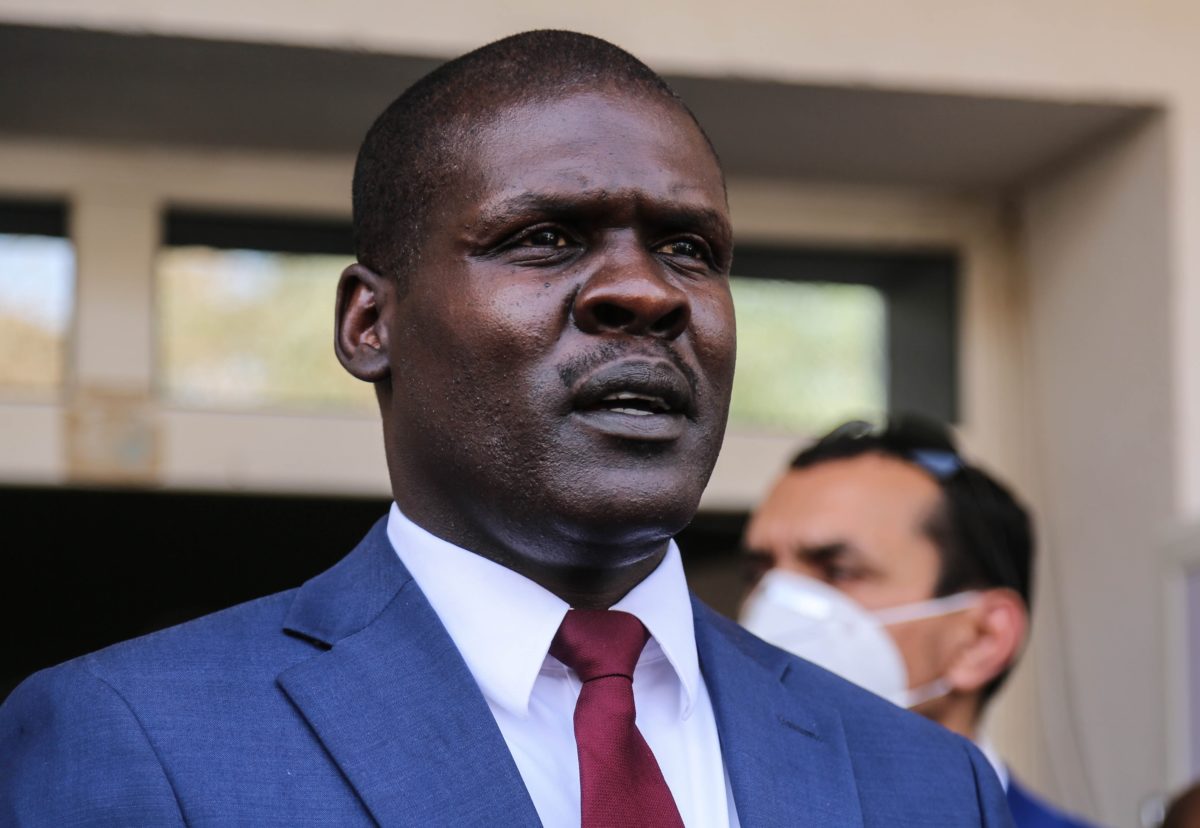 Sudanese Justice Minister Nasredeen Abdulbari speaks to press after their meeting in Khartoum, Sudan on October 19, 2020.

As Sudan’s relations with Israel remain in limbo following a military coup in the East African nation last year, the State Department is urging Israel not to proceed with normalization until a civilian-led government is restored in Sudan.

“We strongly encourage the State of Israel to join us and the broader international community in vocally pressing for Sudan’s military leaders to cede power to a credible, civilian-led transitional government,” a State Department spokesperson told Jewish Insider.

Additionally, the U.S. “will not resume currently paused assistance to the Sudanese government until a credible civilian government is in place,” the State Department spokesperson said of promised financial and debt-related assistance, including “assistance originally committed to Sudan’s civilian-led transitional government in connection with its efforts to improve Sudan’s bilateral relationship with Israel.”

Sudan signed onto the Accords in January 2021, during a very brief period of relative stability between a 2019 uprising that saw Omar al Bashir, the dictator who ruled the country for 30 years, wrested from power and last year’s coup that led to military control of Sudan.

When the East African nation announced its support for normalization in October 2020, it was accompanied by a joint statement between Sudan, Israel and the U.S. that said that Sudan’s government “demonstrated its courage and commitment to combatting terrorism, building its democratic institutions, and improving its relations with its neighbors.”

As a result, President Donald Trump removed Sudan from the U.S. list of state sponsors of terror. The State Department spokesperson said Sudan will not be re-added to the list and that the designation “was based on specific statutory criteria and was not tied to its former government’s efforts to improve relations with Israel.”

The U.S. “strongly supported the decision of Sudan’s civilian-led transitional government to improve the country’s relationship with Israel and applauded the specific commitments that both sides made in that regard,” the State Department spokesperson said, but “the decision by Sudan’s military leaders to seize power on October 25 has made any further progress in improving these countries’ relationship unsustainable.”

Washington has thrown its weight behind a U.N. group that is working to help the country transition back to civilian rule. Earlier this week, several federal agencies led by the State Department issued a business advisory to “highlight growing risks” to American businesses who might conduct business with Sudanese state-owned enterprises, which are now controlled by the military.

A spokesperson for the Israeli embassy in Washington declined to comment on the topic, as did a spokesperson at Israel’s Foreign Ministry.

Israel has not condemned the coup, which was followed by a violent crackdown against protestors, despite repeated entreaties from the U.S. government. An Israeli military delegation that visited Sudan just before the coup has reportedly stayed in contact with the Sudanese military.

“This was perceived in Sudan as proof of Israel’s support for the military leaders,” former Sudanese Justice Minister Nasredeen Abdulbari wrote in Haaretz in April, arguing that the communications will have a “negative impact” on how the Sudanese public feels about normalization.

“If Israel is interested in continued normalization, and in security and civil stability, it must unequivocally support democracy,” Abdulbari wrote. “By doing so it will bring about a change in the perception of many Sudanese, who think that Israel is supporting the authoritarian military regime, or acquiescing to it.”

Abdulbari represented Sudan at an October conference in Abu Dhabi that brought together ministers from Israel, Jordan, Egypt and the other signatories of the Abraham Accords — the United Arab Emirates, Bahrain and Morocco. The foreign ministers from the rest of those nations convened in March at the Negev Summit organized by U.S. Secretary of State Tony Blinke. But Sudan was not present at the Negev Summit, and Abdulbari was kicked out of the Sudanese government following the coup that ousted the civilian-led government.

That Abdulbari recently published an op-ed in an Israeli publication is “an indication that there are people still working on [normalization] and trying to set the table for it,” said former U.S. Ambassador to Israel Dan Shapiro, who added that he is not aware of recent Israeli efforts to finalize the normalization process.

“They recognize the difficulty of doing that without full U.S. support,” said Shapiro, who is now a distinguished fellow at the Atlantic Council. “But also, perhaps, they recognize that that could compromise the support for [normalization] within Sudan itself, and then it’s a question of how sustainable it would be if and when civilian government is restored.”

Sudan’s membership in the Abraham Accords remains in limbo. The country has not been officially removed from the agreement, but neither are Israeli officials actively working on completing the normalization process.

“There was an interest in getting as many countries as possible, as quickly as possible,” Victoria Coates, who worked on Middle East politics first at the National Security Council and then at the Department of Energy in the Trump administration, said of the Abraham Accords. “But in hindsight, that was probably a bridge too far, just for where [Sudan] was in its development.”

For now, Israel appears content to leave the Sudan relationship alone and not draw attention to it.

“I think that if it was up to Israel, it would have happened already,” said Dan Arbell, a former longtime Israeli diplomat. “It’s on the back burner and awaiting a decision, or developments in Sudan that can actually make way for this to happen.”

The delay in Israel’s planned normalization with Sudan does not yet appear to have hindered Israel’s relations with other African nations, Arbell noted. Earlier this month, an Israeli ambassador to several African countries presented his credentials to Chad’s president, the first time an Israeli diplomat has done so in more than 50 years. And ties between Israel and the North African nation of Morocco are strong — and growing.

“I don’t think this is preventing Israel from having other countries in Africa join,” added Arbell.