The case will now return to a lower court for further proceedings, with the final outcome still in question 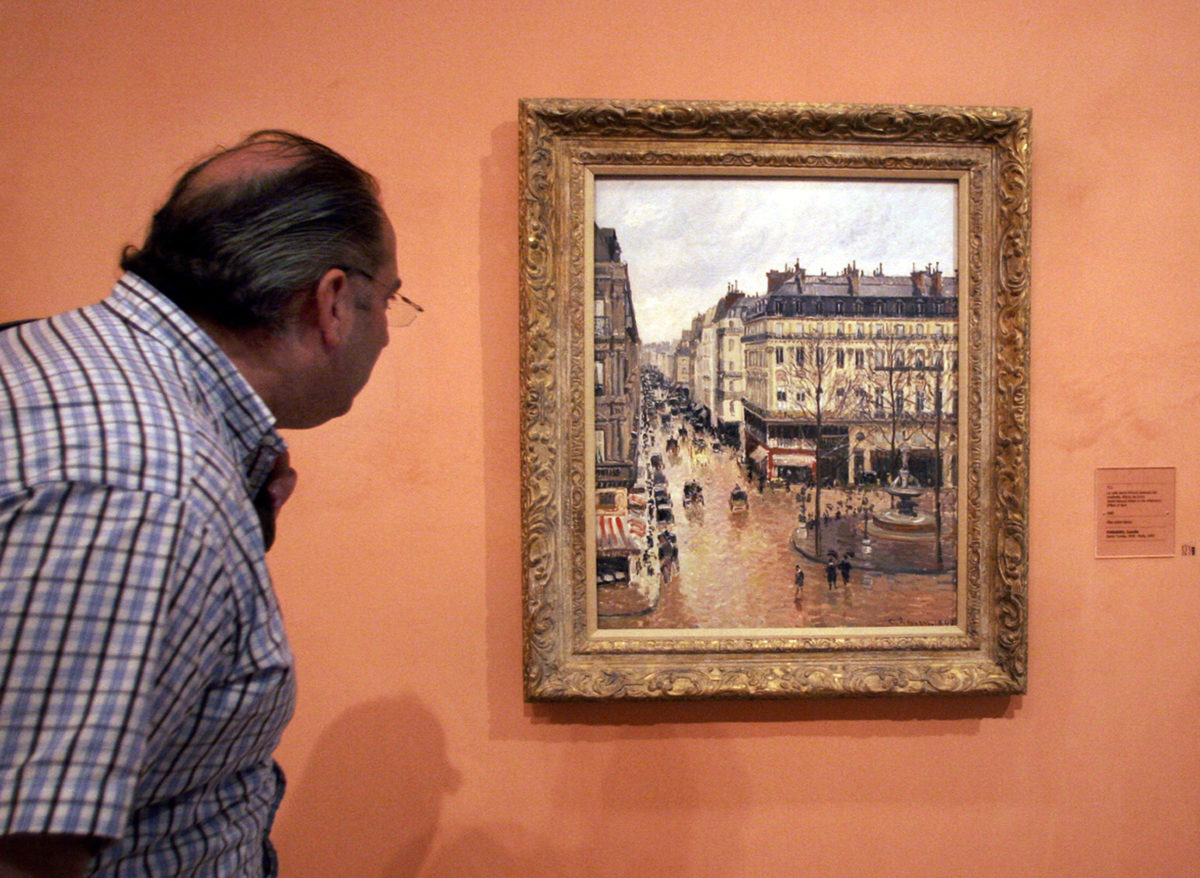 This May 12, 2005, file photo shows an unidentified visitor viewing the Impressionist painting called "Rue St.-Honore, Apres-Midi, Effet de Pluie" painted in 1897 by Camille Pissarro, on display in the Thyssen-Bornemisza Museum in Madrid.

The Supreme Court sided unanimously last week with the heirs of a Holocaust survivor who are seeking to reclaim from a Spanish state museum a painting taken by the Nazis, opening up a new phase in the long-running legal battle.

The family of Lilly Cassirer has been involved in a multigenerational dispute with the Spanish government-owned Thyssen-Bornemisza National Museum, which holds a painting by French Impressionist Camille Pissarro. The painting was taken from Cassirer by the Nazi regime during the Holocaust and later purchased from a dealer in New York by Baron Hans Heinrich Thyssen-Bornemisza. The Baron transferred it to a nonprofit upon his death, creating the eponymous museum.

The question before the Court pertained to legal rules determining whether federal or state “choice-of-law” standards for adjudicating the case should be applied in deciding possession of the artwork, estimated to be worth more than $30 million. These rules determine whether the case would be adjudicated under domestic or Spanish law.

A lower court determined that federal choice-of-law rules should be used and that the case should be decided according to Spanish law, which grants legal possession of the looted artwork to the museum. The Cassirer family argued that California choice-of-law rules should have been used, and that this would have led to the case being decided under California law and granted them possession of the artwork.

In its decision, the Supreme Court agreed that California choice-of-law rules should be applied, but kicked the case back down to a lower court to decide whether that choice-of-law test would dictate the application of California or Spanish law.

Authoring the opinion for all nine justices, Justice Elena Kagan wrote that Spain should be treated the same as any other private party — such as a U.S.-based museum — would be in the case, and that the law therefore dictates the use of California’s choice-of-law test.

“The path of our decision has been as short as the hunt for [the artwork] was long; our ruling is as simple as the conflict over its rightful owner has been vexed,” Kagan, who is Jewish, wrote. “A foreign state or instrumentality… is liable just as a private party would be.”

The Cassirer family and its attorneys celebrated the decision.

“My late father, Claude Cassirer, was a Holocaust survivor and as a result, an immigrant to this country. After all that he and his family had been through, he felt strongly that the proudest day of his life was when he became a U.S. citizen after the war,” David Cassirer, the descendant of Lilly who is carrying on the suit, told Jewish Insider. “He and my late mother Beverly, who were married for almost 70 years until my father’s passing, would have been so happy to know that this case was decided favorably, and unanimously, by the highest court in the land.”

“Today, we move one step closer toward returning this important piece of art to its rightful owners,” Steve Zack, an attorney for Boies Schiller Flexner, the firm that has represented the Cassirer family for over a decade, said. “We applaud the Supreme Court’s unanimous decision, which sets the stage for a new trial and the opportunity to make clear to the world that looted artworks must be returned, no matter how many decades have gone by since the initial theft.”

Lawyers for the museum did not respond to a request for comment from JI, but the museum released a statement expressing confidence that it would maintain possession of the artwork. The lawyers have argued previously that California rules would also dictate that the case be judged based on Spanish law, leaving the painting in the museum’s hands.

Nicholas O’Donnell, a litigator specializing in art law cases who argued a separate Holocaust-era art restitution case before the court in late 2020 and submitted a brief supporting the Cassirers, said that there are now multiple paths ahead.

If the lower court decides Spanish law applies, “then that is likely once again the end of the case,” O’Donnell said. If the court decides California law applies, “the Cassirer family almost certainly would win because you have findings already that the Baron failed to acquire good title in 1976, so any subsequent transfer would be voidable.”

Under California law, the recipient or purchaser of stolen property can never acquire rightful possession of said property, even if they were not aware the property was stolen. Under Spanish law, the museum was able to acquire good title to the art after possessing it for sufficient time, even though the painting was stolen.

“The factors in the California choice-of-law test are similar to the federal common law test that’s now been invalidated, but they’re not the same,” he continued.

Sam Dubbin, an attorney who has represented Holocaust survivors and their relatives in restitution cases for more than two decades and served as a co-counsel for the Cassirers, also lauded the high court’s decision.

“[The] decision was an important victory for history, morality, and accountability.  The Cassirers’ battle to recover their prized Pissarro — despite the passage of decades — has been a heroic fight for all survivors and their families,” Dubbin said. “Everywhere, people, governments, and private institutions have looked the other way to profit from the Nazis’ genocidal thefts from the Jewish people — just like Spain and the Museum in this case. Heaven-willing, today’s Court’s decision will not only result in the Cassirers finally recovering their painting, but bring an end to the lies and obfuscations that have been used to deny justice to untold numbers of other Holocaust survivors and their families.”