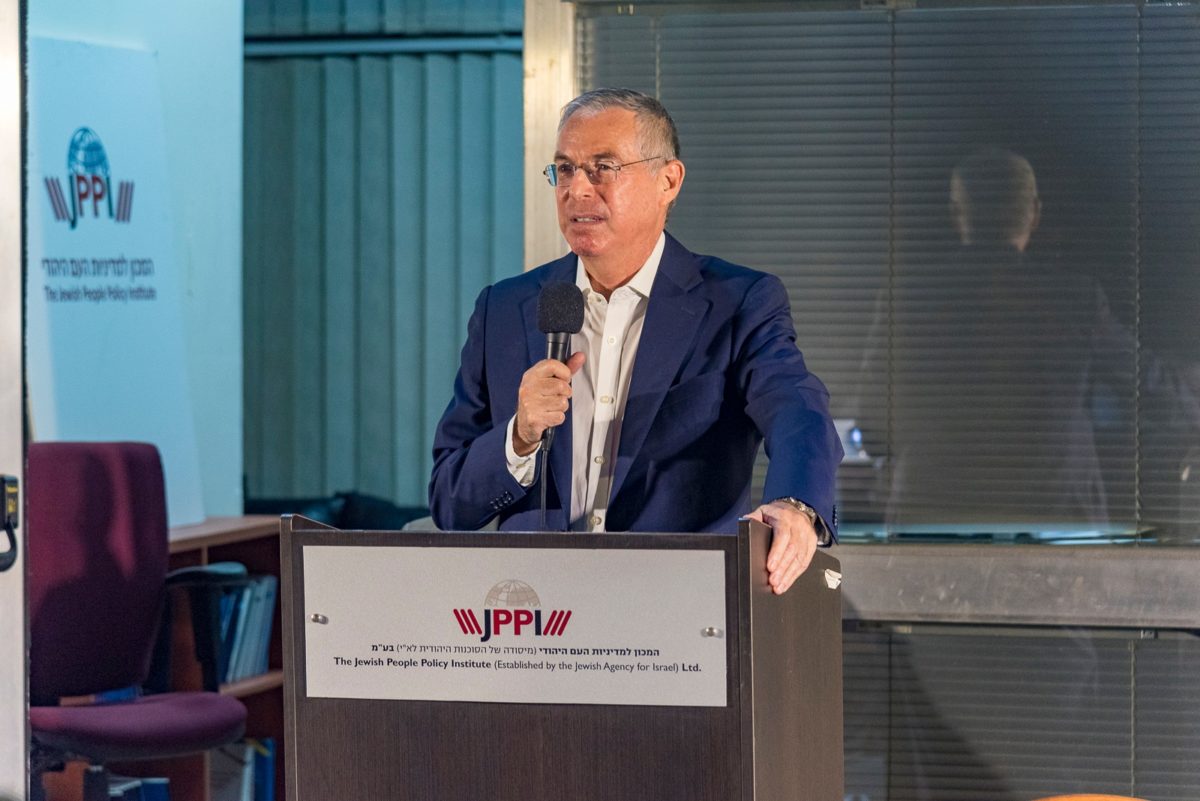 The best strategy for preventing a nuclear-armed Iran is “serious deterrence,” Israeli Ambassador to the U.S. Michael Herzog said in a Monday virtual event with The Washington Post that also touched on the Israeli-Palestinian peace process and Israel’s response to Russia’s invasion of Ukraine.

“I do believe that if you reinstate deterrence, you will prevent war. I certainly believe that if you show assertiveness vis-a-vis Iran, as Israel has shown in the last few years in the region, you will deter Iran,” Herzog said. When pressed by Post national security correspondent Souad Mekhennet what deterrence looks like, Herzog did not offer specifics.

“We maintain our options open, we will build our capabilities to counter Iran, we will maintain our freedom of action. And we’ll decide in due time what action to take,” said Herzog. He added that the main thing he would hope to see in a nuclear agreement is “a deal without sunsets, or if at all, sunsets in a very far distance,” referring to the so-called “sunset clauses” in the 2015 Joint Comprehensive Plan of Action, whereby certain terms of the agreement expire after a predetermined number of years.

Senior Israeli leadership, including Prime Minister Naftali Bennett and Defense Minister Benny Gantz, have openly expressed concerns about the ongoing negotiations in Vienna. On Monday, Herzog reiterated the common refrain that Israel is “not part of the deal” and thus not bound by it.

“The discussion between this deal and no deal is a difficult one because both options are unappealing,” Herzog said in response to a question about what Israel views as the alternative to the agreement being negotiated in Vienna. “The most critical element is not whether you do a deal or you don’t do a deal. It’s whether you have deterrence vis-a-vis Iran.” He said that Israel is “not going to sit idly by” as Iran becomes a “legitimized nuclear threshold state.”

Before becoming ambassador late last year, Herzog served for decades as a member of Israel’s negotiating team and played a role in talks with Palestinians and Jordanians. He touched upon that experience when the conversation turned toward Israel’s normalization agreements with several Arab states. Why, Mekhennet asked, is peace with the Palestinians so much harder to achieve than the agreements reached with the United Arab Emirates, Morocco and Bahrain?

“We’re talking about two national movements with claims to the same piece of territory with conflicting narratives,” Herzog said of the Israeli-Palestinian conflict, drawing a distinction to Israel’s new regional partners with whom it does not share borders. “It’s extremely difficult to bridge over these gaps. It’s not that we haven’t tried. We tried for many, many years, and there were all sorts of offers on the table. And we felt not for lack of trying, I think, in order to bring about such a deal between Israelis and Palestinians would require a certain set of conditions.”

Peace requires “leadership on both sides who can communicate and take decisions like we had had between Israel and Egypt, or between Israel and Jordan,” Herzog said, referring to Israel’s first peace deals with Arab countries, in 1978 and 1994, respectively.

One potential boon for negotiations between Israel and the Palestinians could be the Abraham Accords, Herzog argued. “I certainly believe that Israeli-Arab normalization also offers benefits for Israeli-Palestinian relations, because I believe that Arab involvement could open space, more space, for both parties to engage,” said Herzog.

Herzog also addressed Israel’s response to Russia’s invasion of Ukraine, and criticism from some other Western nations that Israel’s early response was weak. “It took Israel, though, a bit longer to condemn the actions, or at least this was how the rest of the world felt about it,” said Mekhennet. “Why did it take so long for Israel to condemn Russia?”

“I disagree with the premise of your question. It took Israel a day or two, but we condemned unequivocally,” said Herzog, but he added, “We do have some constraints because we have a Russian military neighboring us in Syria, and it’s critical for Israel to maintain freedom of action against Iran in Syria.”

He explained that “we often take action against Iranian military targets” in Syria, and “we don’t want to be in a situation where we risk that freedom of action and the Russians can disrupt it.”