Nachman Helbrans and an associate were convicted last year of kidnapping two children, with the intent of returning one of them to an adult man for the purpose of a sexual relationship 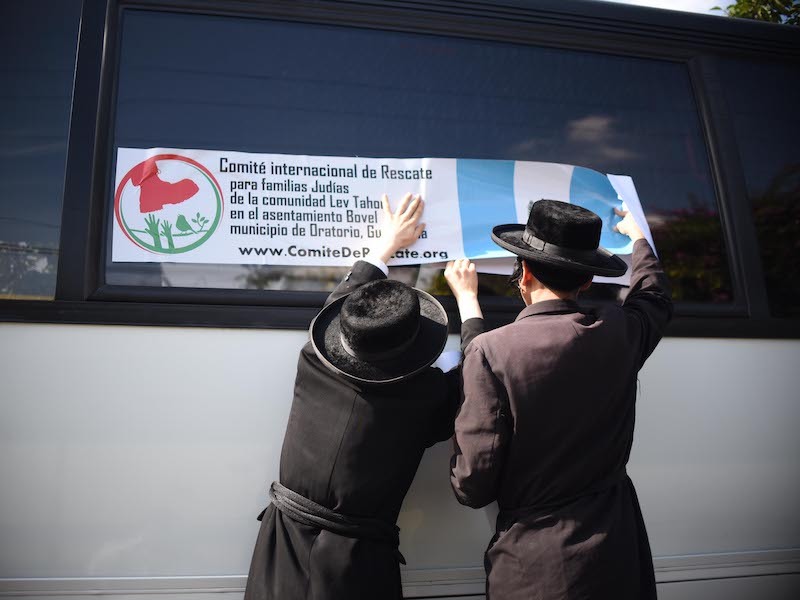 Members of an Orthodox Jewish community put a label from the "International Rescue Committee for Jewish Families of the Lev Tahor Settlement" on the window of a bus in Guatemala city on September 25, 2016.

Nachman Helbrans, the leader of Lev Tahor, the Hasidic sect often described as a cult, was sentenced in federal district court in White Plains, N.Y.  on Thursday to 12 years in prison after being convicted of kidnapping two children with the intent of returning one of them to an adult man for the purpose of a sexual relationship.

During the sentencing hearing, which Jewish Insider listened to via conference call, Judge Nelson S. Roman accused supporters of Helbrans of illegally practicing law without a license by attempting to send the court legal documents. The hearing also included a tearful speech by the mother of the abducted children — pleading for mercy for the man who kidnapped them.

Lev Tahor was founded in 1988 by Helbrans’ father, Shlomo, and has repeatedly moved across borders in a bid to evade prosecution for crimes such as child abuse and abduction. The group has operated in the United States, Canada, Guatemala, Mexico and countries in the Balkans. At one point Lev Tahor unsuccessfully attempted to enter Iran. Women in the group have been photographed wearing black garments that cover them from head to toe.

Nachman Helbrans, 39, took over leadership of the group in 2017 after his father drowned in a river in Mexico. The following year, Helbrans and one of his deputies, Mayer Rosner, abducted Helbrans’ nephew and niece, ages 12 and 14, respectively, from New York, and took them to Mexico with the aim of marrying the 14-year-old girl to an adult man. Three weeks later, the children were recovered by law enforcement and returned to their mother, Helbrans’ sister Sara, and Helbrans and several of his supporters were arrested.

In November 2021, Helbrans and Rosner were convicted in federal court on six counts related to kidnapping minors and transporting them with the intent to engage in sexual conduct. The conviction carried a mandatory minimum sentence of 10 years, and the Probation Office recommended a sentence of 24 years.

But before Helbrans’ attorney, Bruce Koffsky, argued for a lighter sentence, Sara Helbrans, Nachman’s sister and the mother of the kidnapped children, spoke before the court on behalf of her brother. In a tearful voice, she described how her brother cared for their family when their father was imprisoned in 1994, also on charges of kidnapping a child. She claimed that her brother had undergone a profound change for the worse, but said sending him to prison would also cause her more pain.

“Even though my children and I have suffered as a result of his actions, I have forgiven him,” she said. “He is my brother, I love him and I do not want him to suffer… Nachman’s sentence is a continuation of the tragedy that has befallen my family since my father died.”

In arguing for the minimum sentence, Koffsky referenced one of the most well-known songs in the Haggadah, the liturgy read at the Passover Seder. “The refrain is ‘Dayenu” … in Hebrew, and it talks about something being enough,” Koffsky said. “I want to ask the question in this case: What is enough for the defendant? Where can the court say ‘dayenu?’”

In his own remarks, Helbrans did not express regret for his actions. Rather, he claimed that he was being “persecuted and… punished only because I am a loyal Jew and I go with the word of God.”

Koffsky said in court that Helbrans plans to appeal his conviction.