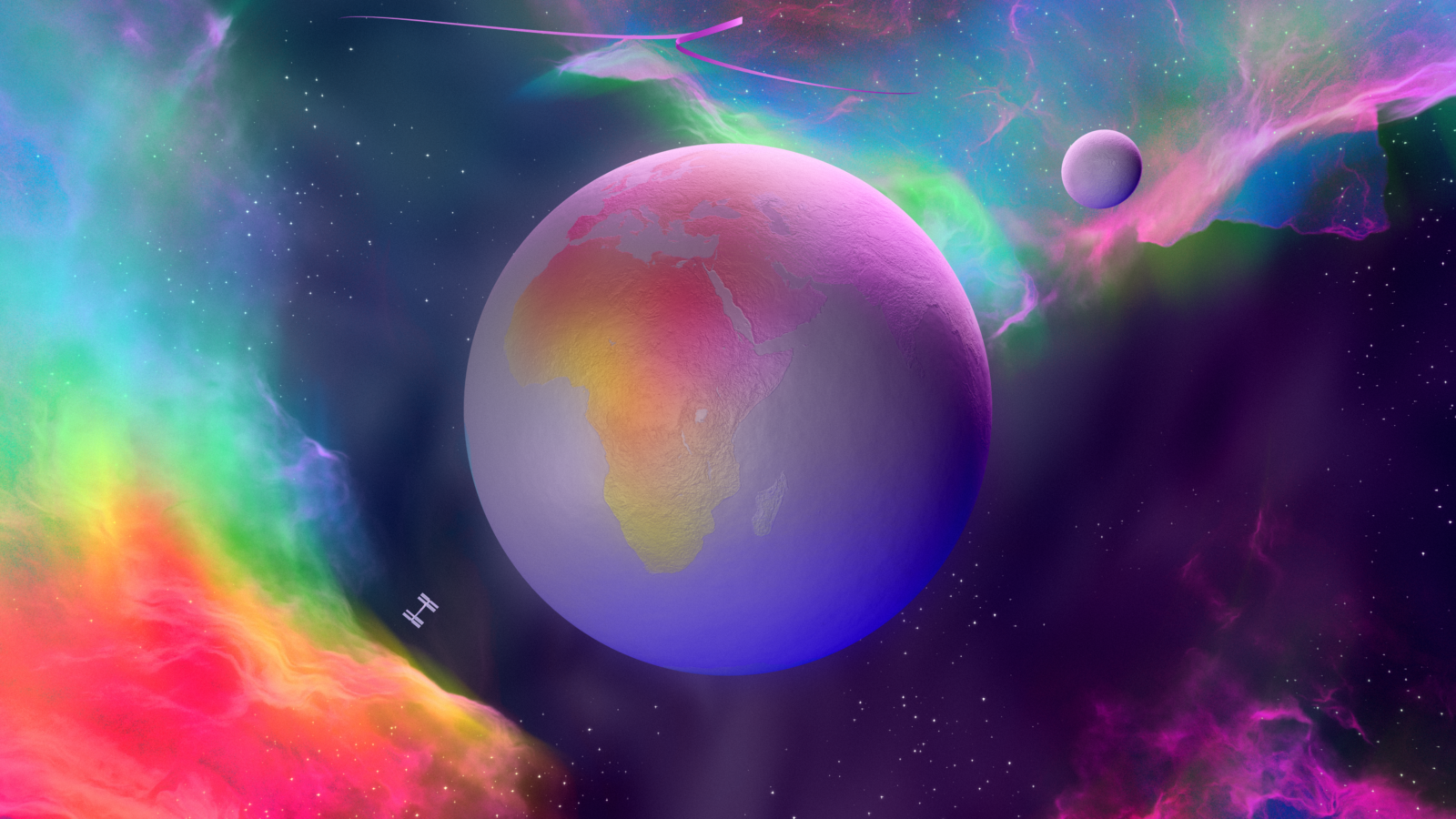 Art to bring dreamers together in space

Sharonna Karni Cohen isn’t afraid to dream big — so big that her vision will soon travel to space.

Nearly a decade ago, the social impact entrepreneur founded a collective of artists and “dreamers” that transforms visions and aspirations into works of art. Karni Cohen founded Dreame in 2014 with the aim of empowering people to be creators. The initiative provides a platform for people to submit their ideas, visions and dreams to an artist of their choice who then transforms them into digital art, which can either be displayed as a framed picture, or printed on a range of items such as a phone case, cushion or yoga mat.

Karni Cohen’s latest project — projecting video art inspired by thousands of submitted visions for the future onto famous landmarks around the world — will culminate when a mosaic of 500 digital pieces of art will be carried into space in April on a mission that will also launch the second Israeli astronaut ever to venture into the cosmos.

Karni Cohen describes herself as “the opposite of an artist,” a factor that helped drive her vision to enable anyone, regardless of their artistic skills — or lack thereof — to play a role in the artistic process. She views art as a medium that can help transform visions into something more tangible.

“One of the main reasons I started Dreame is because of the fact that I’m definitely not an artist, but I believe that everyone has the ability to create something, and I think that because of technology and social media and us being in front of our screens the whole time, we’re actually using our imaginations less. So the whole mission behind Dreame is to empower people to utilize their imagination and to also feel like a creator,” she told Jewish Insider in a recent interview. “You can commission an artwork at a really affordable price, hang it on your wall and then feel like you were as much the artist as the artist who created it with you.”

“The Big Dream” was born three years after Dreame’s founding, when Karni Cohen asked her friends how they imagined Israel in 30 years. Discouraged by the pessimism of her friends’ responses, she reframed the question, asking them instead to imagine the utopian version of the Jewish state. When she extended the question to a group of 1,000 people, she identified several recurring themes: peace, coexistence, culture, environment and freedom.

One dream many expressed back in 2017 was the desire to travel directly to Gulf nations — a dream that began to be realized some three years later after Israel, the United Arab Emirates and Bahrain signed normalization agreements that led to direct flights and increased travel between the countries.

The “First Big Dream” — which took the form of 1,500 yoga mats puzzled together in Tel Aviv’s Rabin Square — was built out of images spawned by those 1,000 visions of the future, a giant collective dream made into an artwork by Israeli illustrator Amit Trainin.

The artwork included giant teapots generating rain clouds, representing a dream for more water (apparently it rained that day in late June on a date that Israel hadn’t seen rain in decades), Venetian-inspired water tunnels in Jerusalem and a direct train line to India traveling through the Middle East.

The displayed artwork — stretched over roughly 1,400 square meters — invited people in to meditate and practice yoga. Participants could leave with a yoga mat, if they so chose. “The whole essence is that everyone contributes to the future and then everyone also takes a piece home with them,” Karni Cohen explained.

Karni Cohen credits the Israeli mindset for the success of her projects. “None of this would have happened anywhere else in the world,” she asserted. “Even the puzzling [together] of the yoga mats. I don’t think 50 friends of mine in London would have come to help me at 6 in the morning. It’s a very Israeli attitude and I’m forever grateful to Israel and ‘Start-up Nation’ for empowering my creativity and my drive and all the fellow entrepreneurs that I work with, so I think in many ways it’s thanks to Israel that this project was born.”

A similar event was held in Jerusalem a year after the “First Big Dream.” For its current project, Karni Cohen’s team is thinking bigger than ever, aiming to collect a total of 50,000 dreams for the planet’s future from all over the world by March 31. Fifty artists will choose 10 dreams each and will collate them into one mosaic and video animation.

The final piece will be unveiled in a range of locations including the Old Royal Naval College in London, U.K.; the Peres Center for Peace and Innovation in Jaffa, Israel; Fed Square in Melbourne, Australia; Łódź, Poland; Shibuya crossing in Tokyo, Japan; and Hamar, Norway. The final location will be the International Space Station (ISS), as part of the Rakia (“sky” in Hebrew) mission, with Israeli astronaut Eytan Stibbe projecting the final piece and a heat map connecting all the dreams with the world.

A “Big Dream” flag has already been sent to NASA for the space mission’s preparations. The last person to hold the flag before it began its journey into space was 96-year-old Holocaust survivor Dov Landau, who met Karni Cohen by chance in Rabin Square just before she gave it to a representative of the Ramon Foundation, who then passed it onto NASA.

Asked about his own dream, Karni told JI that the Auschwitz survivor envisions a world in which people are more compassionate, and believes this requires people to be more optimistic. This sentiment echoes Karni Cohen’s own opinion that despite any cynicism one might have, “it’s important to hold on to any optimism that we have and value it.”

The encounter with Landau, Karni Cohen said, “gave me goosebumps in that moment, as we were also in Rabin Square where the whole project was born.”

Embassies from around the world, with the help of the Israeli Foreign Ministry, have been involved in the effort.

Various foundations and organizations have also helped collect dreams for the project; members of the Mars Society, for instance, submitted visions of human life on the Red Planet.

Mental health, the environment, family welfare and peace are among recurring themes of submitted dreams. Children and adults alike have participated in the project; a number of children from around the world dreamed of opening an ice cream store to make people happy.

“The pieces created do justice to the dreams we receive, and range from funny, to deeply moving, to completely crazy. An interactive heat map made by Sagi Gafni will link similar dreams and show an artwork every time the ISS flies over a location where a dream was turned into art. Literally connecting the dreamers of the world through art!”, said Jæn, the project’s art director, in an announcement about the initiative.

The 50 artists are of 36 nationalities, including Israeli, Russian, Chinese, Indian, Filipino and Iranian. The artists work in different styles ranging from clay to collage, from 3D to illustration. “It’s just so nice to have a dream from Japan turned into art by an artist in Mexico,” Karni Cohen said. “There are so many global layers.”

One dreamer in Israel had their vision of people “understanding the other” made into art by a French artist. Another dreamer in Portugal, a lung cancer patient, dreamed of a cure for cancer. Lily Ben Ami, the sister of Michal Sela, who was murdered by her partner, dreamed of an end to domestic violence.

Glimpses of the art have already been exhibited in New York’s Times Square, the Leopold Museum in Vienna, Chengdu, China and Mount Manaslu, Nepal.

During the space mission, the artwork will travel for eight days and be projected as a hologram that people will be able to see online and know above which part of the world it is at that moment. “The idea is to create correlations between the dreams and remind people around the world that we have quite similar dreams to each other,” said Karni Cohen.

The grassroots project will offer its final pieces in an NFT auction with Nifty Gateway, a digital auction platform. A portion of the proceeds will be donated to NGOs whose work reflect the different dreams submitted.