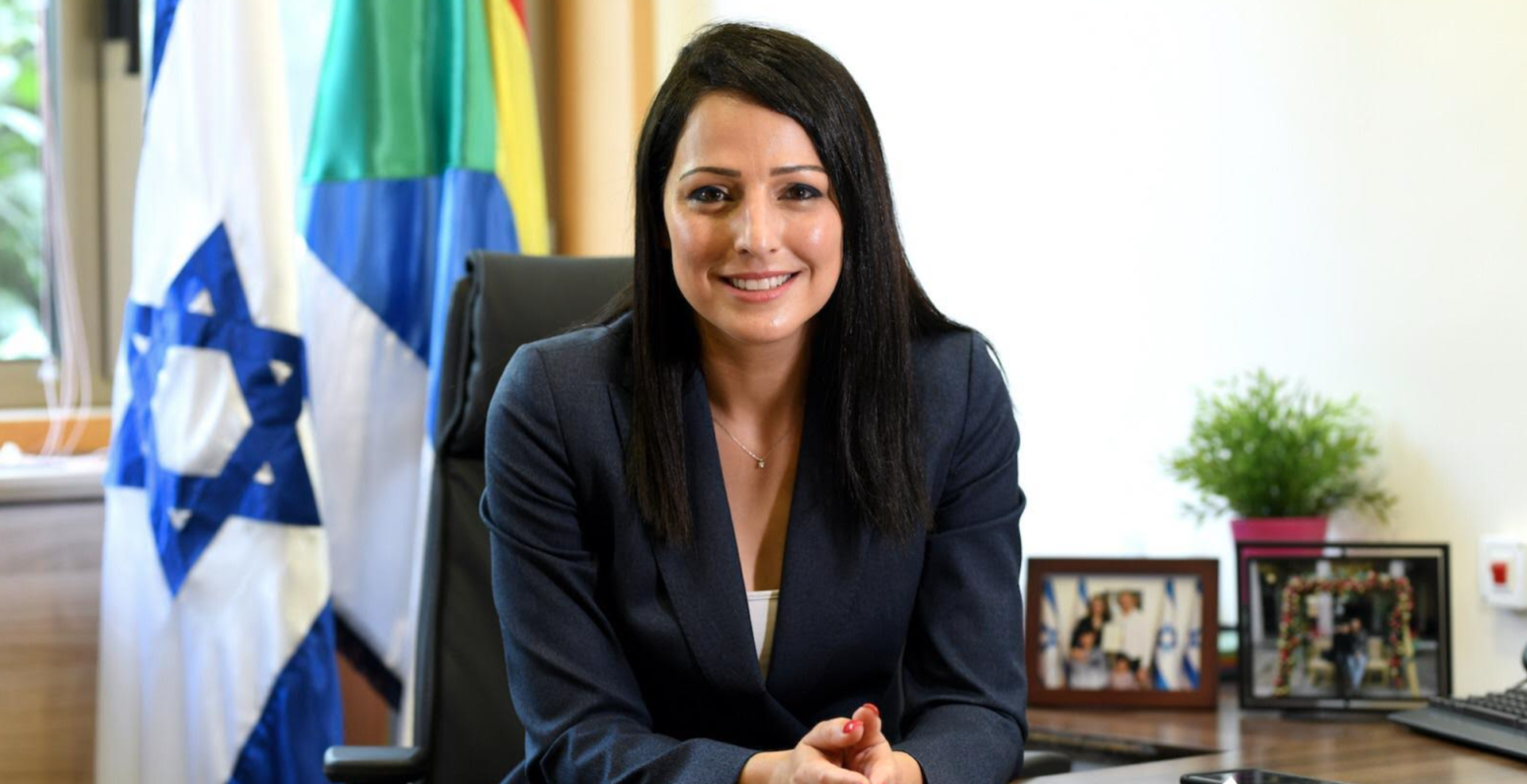 The Druze emissary ‘bringing the complexity’ of Israel to American Jews

Gadeer Kamal-Mreeh, a member of the Druze community, is the first non-Jewish Israeli to serve as a senior shaliach for the Jewish Agency

Gadeer Kamal-Mreeh’s roots were planted the moment she was born in Daliyat al-Karmel. Born into a Druze culture that honors the idea of home, she never considered living anywhere besides the hill town southeast of Haifa.

Throughout her years as the first non-Jewish woman to anchor a Hebrew program on Israeli TV, and then as the first female Druze member of the Knesset, she drove the hour home each night from Jerusalem to the village.

But during the video call, she was not sitting in her home in Israel. She was thousands of miles away in Washington, D.C., her first time living outside of her village of 17,000.

Kamal-Mreeh, 37, is in the United States as a shlicha, or emissary, of The Jewish Agency for Israel, which sends thousands of Israelis to the U.S. each year to serve as representatives of Israel in American Jewish communities. She is the first non-Jewish Israeli to serve as a senior emissary with the Jewish Agency, a quasi-governmental agency that deals with Diaspora affairs, but that was not her motivation.

“You don’t wake up in the morning and say, ‘What is next? What is the next glass ceiling that I need to break?’” she explained. “If those are things or stations or places that happened to me during my life, then I’m glad. it is always important to bring diversity, not just to talk about diversity.”

Israel has had non-Jewish diplomats before — the first Arab Israeli diplomat was Ali Yahya, a Muslim appointed to be ambassador to Finland in 1995 — but Kamal-Mreeh’s position is different. She does not represent the government of Israel, nor is she tasked with advancing Israel’s interests in matters of foreign policy. Her goal is more straightforward, but perhaps also more complicated: strengthening the relationship between American Jews and Israel.

She arrived in the U.S. in July of last year, weeks after a period of intense fighting between Israel and Hamas that touched off a wave of anti-Israel rhetoric and antisemitic attacks in the U.S.

The majority of American Jews say they have a connection to Israel. But studies released last year found that American Jews, particularly young Jews, have a wide array of views on Israel.

A survey of Jewish voters released last July found that a quarter of American Jews agreed that “Israel is an apartheid state,” including more than a third of Jews younger than 40. Nine percent  of young Jews said that Israel does not have a right to exist. A major Pew Research Center poll published in May of 2021 found that 58% of American Jews feel at least somewhat attached to Israel, but that 48% of Jews between 18 and 29 feel an attachment to Israel.

“We face a pivotal challenge in trying to connect American Jews to Israel,” said Dan Elbaum, The Jewish Agency’s head of North America. Kamal-Mreeh “is not uncritical of certain Israeli policies or other things like that. They hear about that. From what I’ve seen and heard, there is [also] such a pride in the Jewish state.”

As a member of a minority group who has built a remarkable, if unlikely, high-profile career, Kamal-Mreeh argues that she brings a unique perspective to the conversation plaguing American Jewish leaders about how to better connect young Jews to Israel.

“I believe my uniqueness is that I am bringing the complexity. Our role is not just to highlight the beauty. Our role also is to bring the complexity, to tell people, ‘Don’t be afraid to say anything. Don’t be afraid to ask anything,’” Kamal-Mreeh said. “I don’t worry if people criticize me or us as a state. I will worry once they stop [doing] that, because you criticize when you care. And Israel is a complicated state.”

From the time she was a child, Kamal-Mreeh was interested in journalism. “I called the manager of a local TV station when I was in the sixth grade, telling him, ‘Hi, my name is Gadeer, and I want to broadcast a TV show,’” she recalled. “He just laughed. He didn’t know how to react. ‘You’re a child,’ they said.”

Kamal-Mreeh did not serve in the Israeli army or do national service, a path that is now becoming more common for Druze women. She also did not become a journalist — at least, not initially: First, she studied at Bar-Ilan University to become an ultrasound technician. It was only after an injury made it difficult for her to perform that job that she went back to school, to the University of Haifa, where she studied international relations.

As Kamal-Mreeh advanced in her highly visible career, she worried about how her conservative community would view her successes.

“What surprised me is how much I was accepted in a respectful, fair way in my society,” said Kamal-Mreeh. In 2017, she became the anchor of Channel 1’s Hebrew-language weekend program, making her the first non-Jewish woman to anchor a broadcast in Hebrew. When her community’s spiritual leader called to congratulate her, “​​I cried,” she recalled. “I said to myself, ‘We did it,’ in terms of the religious leadership in my community is ready to be open-minded.”

Her work as a news anchor came from a childhood belief in “the huge power of screens when we are seeking to shape public opinion.” But then, Kamal-Mreeh explained, “I realized that my power is limited as a journalist.” When now-Defense Minister Benny Gantz asked her to join his party, she agreed. In 2019, as a member of the Blue and White party’s slate, she became the first Druze woman elected to the Knesset.

“For her, Israel isn’t only a home, but a mission and a calling for both Israeli society at large, and Druze society in particular,” Israeli Foreign Minister Yair Lapid told JI in a statement. “I see the great work she’s doing and I’m sure she’ll make changes both big and small.”

The 2018 passage of controversial legislation led Kamal-Mreeh to consider a career in politics for the first time. “The Nation-State Law,” she said, “is a basic law that the Knesset legislated in 2018 to ensure that Israel is the historic homeland of the Jewish people, which is good, but with refusal of mentioning or adding the equality, the value of equality, the civil equality for all of our citizens, which is the problematic part.” The bill also downgraded the Arabic language, Kamal-Mreeh’s native tongue, to a “special status.”

As a journalist, she had covered Druze protests against the bill. “When I was in Rabin Square, people were chanting, ‘Shivyon, shivyon, shivyon.’ Shivyon, which means equality. Those are their demands, just to be equal citizens,” said Kamal-Mreeh.

“We are talking about the sense of belonging, about the refusal of my country to consider me as an A-class citizen. Once a democratic country categorized its citizens to A-class and B-class, to Jews and non-Jews, it is strong. And history taught us what happened to countries who create those divisions, and suddenly [I’m] seeing my country doing that for me.”

The law remains on the books, and she struggles with it publicly — which she says is something that makes her proud to be Israeli. That public acknowledgment that Israel is far from perfect, and that it struggles with thorny identity questions in the same way that other democracies do, is why she was chosen to go to America.

“We love our country. The fact that we cherish and we are enjoying freedom in our country, it doesn’t mean that I need to be grateful each day for being born in Israel. I am the eighth generation living in Israel,” she added.

In conversations with American Jews, Kamal-Mreeh says she has found a population that is eager to engage on complicated matters and aware that old-school styles of Israel advocacy no longer work.

“Bringing the superficial propaganda of, ‘We are good, trust us, we are wise, we are good, we are the absolute’ — [that] advocacy, I don’t believe it works anymore. What worked in the ‘80s or in the ‘90s, it doesn’t work anymore,” she explained.

Based in Washington, Kamal-Mreeh has a national portfolio. She has not yet engaged much with Washington’s political class — a meeting with a few members of Congress is in the works — although political types tend to populate the region’s synagogues. She recently spent several days in Florida visiting college campuses, and she has spoken to Jewish communities around the country.

“She’s probably been to more Shabbat dinners and spoken in more synagogues than many of our other shlichim,” said Elbaum. “She certainly is becoming part of our Jewish life also, even though she’s not Jewish.”

Kamal-Mreeh plans to spend up to three years in the U.S. with her husband and their children (and a dog, who interrupted her frequently during the interview). She doesn’t know what may come next, but hasn’t ruled out a return to politics. “Maybe one day I will decide to go back to politics. It enriches me, enriches my ability to read reality. It broadens my perspectives, deepens the way that I think, how I think, my stance, my opinions,” she explained.

By the time that she leaves, she and Elbaum have at least one metric of measuring her success.
“When she and I spoke about the role, within our first or second conversation,” recalled Elbaum, “what I said to her is that we both need to set a personal goal that when she leaves she will not be the only non-Jewish shaliach.”