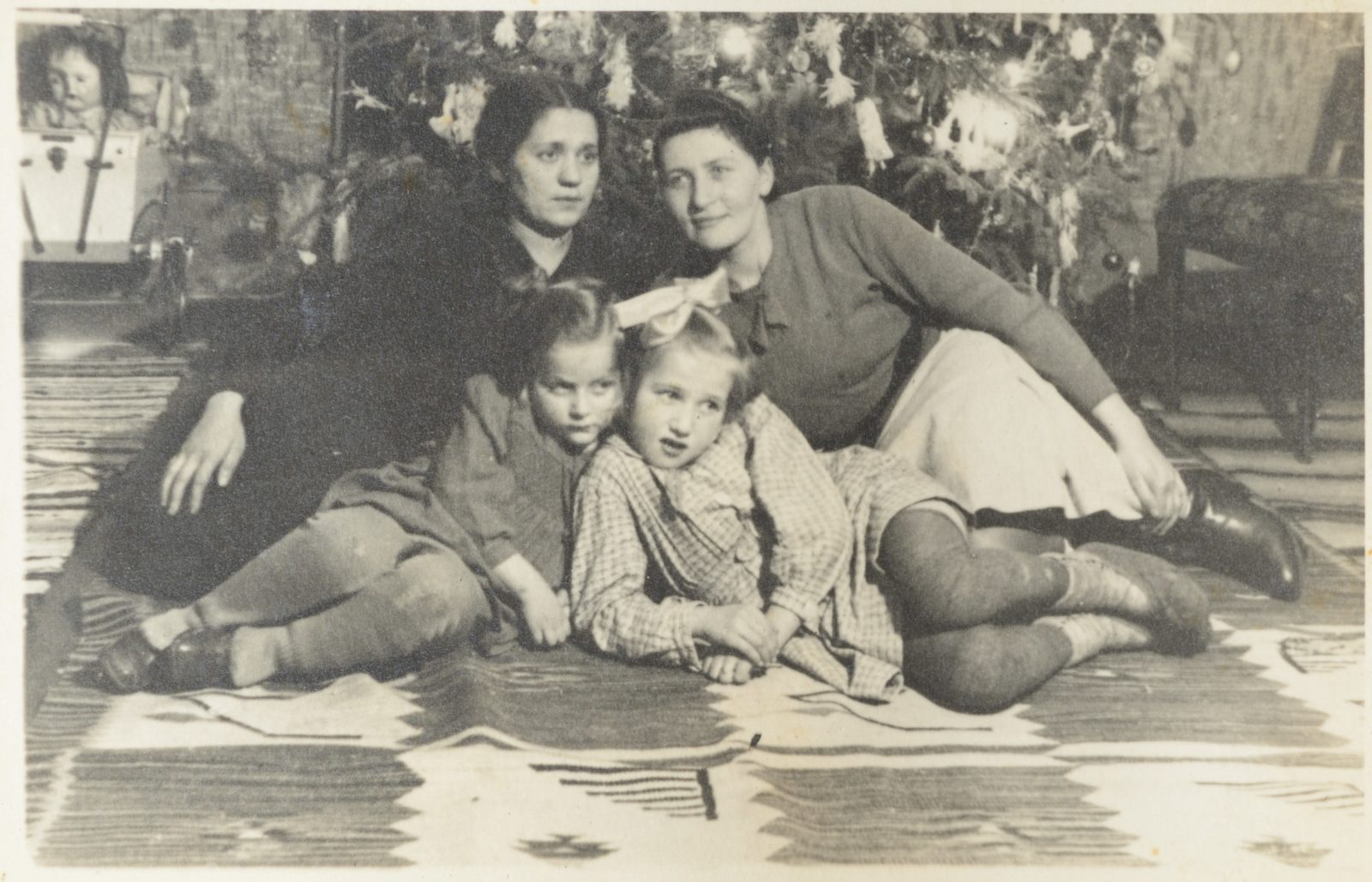 The many names, and lives, of a child hidden in the Holocaust

Yad Vashem exhibition highlights the harrowing stories of those, like Israela Hargil, who survived the Holocaust outside of the camps and sometimes in compassionate Christian hands

At the age of 3, Iza Harnik was forced to assume an entirely new identity, memorize a new life story and learn prayers belonging to her newly adopted religion — a false but life-saving guise that saved the young Jewish girl from the Nazis when a Christian family provided her with refuge in German-occupied Brody, formerly Poland, today Ukraine.

On June 22, 1941, the Germans began the invasion of the Soviet Union. Brody, which had been occupied by the Red Army since 1939, was bombed before the Germans occupied it at the end of June 1941.

Despite her young age during World War II, Iza, today named Israela Hargil, retained vivid memories from that time. “I remember we were in a kind of cellar with a group of Jews — and the bombs, it was very noisy outside,” Hargil, 84, told Jewish Insider in a phone interview this week.

“When it became quiet outside my father went out cautiously, and when he came back he said he met his Polish friend, [Jacenty] Miklaszewski, and he offered to take me to his house. Well, I had nothing to say about it,” Hargil said.

She remembers going back to their home to find chaos — cupboards toppled over and books  strewn on the floor. “My father said, ‘How lucky that we did not hide Iza behind the library books,’” she recalled.

The exhibition, “Remember Your New Name: Surviving the Holocaust Under a False Identity,” tells the stories — through testimonies, personal documents, photographs, artworks and footage — of 14 Jews who survived outside of the ghettos, concentration and extermination camps, under assumed identities in countries across Europe.

Hargil’s mother, Elsa Harnik, a teacher and musician, was killed alongside her brother Shoylek Kahana some two weeks after the occupation of Brody, when German soldiers interrogated and murdered approximately 250 Jewish men and women.

By January 1942, the Jews of Brody were confined in a ghetto. Iza was smuggled out, and into the home of Miklaszewski and his wife, Maria. Her father, Kalman-Karl Harnik, knew Miklaszewski from the orchestra he conducted.

Iza’s grandmother Sheindel perished in the ghetto. Kalman-Karl escaped and hid, with Miklaszewski’s assistance, in a pit in a village near Brody.

Iza’s new name was Eva. She had to learn her new Polish identity, along with Christian prayers that she would recite while kneeling by her bed. She was instructed to tell anyone who asked that her parents were killed in the bombing of their village and she was subsequently adopted by her “uncle and aunt.”

“Whenever the neighbors or anybody asked, I told them this story,” Hargil said.

The Miklaszewskis had a daughter four years “Eva’s” senior, Władysława, who became her friend and adopted sister.

Hargil said she was “very quiet.” But their neighbors were still suspicious. Etched in Hargil’s memory is the day a neighbor burst into the house when only “Eva” was there, shouting that she knew the family was sheltering a Jewish girl. “Eva” slid under a bed and remained there for hours.

The family moved “Eva” several times, for fear of denunciation. Hargil remembers staying with a mother and her baby, for whom she was left to care for while the mother went out to work. After that, she lived with a large family on a farm, where she helped tend to the cows — she remembers their enormous stature towering over her small frame. She was then moved yet again to the home of an elderly woman whom she remembers for taking good care of her when she was sick.

Eventually, the Miklaszewskis picked “Eva” up and took her with them to Krakow, where they had extended family. Before they left, they took her to her father’s hiding place. The family asked her not to tell her father about their leaving, fearing he would want to keep her with him, “so I didn’t say a word.”

“I got a warm feeling and embrace from my father, whom I missed and longed for,” she said, noting that while they were apart, she never spoke about how much she missed him.

The Miklaszewskis and “Eva” took a train to Krakow and, for the first time, felt relieved from the burden of suspicion.

“That was the first time I was free to move around,” Hargil told JI.

In Krakow, “Eva” went to a kindergarten run by nuns and then to first grade.

“I learned that the Jews are a terrible people, very ugly, very hateful, that killed God, Jesus. And I didn’t want to belong to them but I always remembered that I am a Jew, always it was in the back of my mind,” Hargil said.

Hargil said she enjoyed the Chrisitan rituals, dressing nicely and going to church, celebrating Christmas and other holidays.

“I had no desire at all to belong to this [Judaism],” she said in her testimony to Yad Vashem. “I have many good, beautiful memories of [the Christian] religion. We went to church every Sunday, we got dressed up, and the church was beautiful. The views were all aesthetic: lovely pictures, colorful windows, a quiet atmosphere, pleasant lighting… The priest, prayers, songs and organ all evoked positive associations within me. Everything was beautiful, and I was part of it. But there was always the dread… of being found out to be Jewish.”

Her memories from those four years living under a false identity are a mixture of happy and sad ones but ultimately, Hargil told JI, “I’m grateful that they made such an effort to save me and to help my father.”

In 1982, Yad Vashem recognized the Miklaszewski family as Righteous Among the Nations. Hargil stayed in touch with them for many years.

“Eva” was reunited with her father in 1946 — but the rebuilding of their relationship was gradual.

One day, during recess at school, a teacher asked “Eva” to show a relative how to get to her family’s house. That man was her father — but she didn’t know it yet. They chatted and the encounter felt natural to her. “My father was a teacher and a musician so he knew how to talk to children,” Hargil explained. After a long walk together to the Miklaszewski home, the man was revealed to be her father. “We entered the house and they started shouting ‘Karl! Kalman! Eva, it’s your father!'”

Once again, “Eva” hid under a bed and didn’t want to come out. “Because I knew that this is Jews, and that will be terrible for me,” Hargil related.

Kalman-Karl stayed with the Miklaszewski family while his daughter slowly opened up to him. He bought presents for her and her adopted sister and worked his way back into her heart. But she wasn’t prepared to leave with him to another town, unless Władysława went with them. He took the two on a trip together and eventually returned Władysława to Krakow while he and his daughter remained in Bielsko, where three of their relatives who had survived Auschwitz had made a home.

“There started my Jewish life,” Hargil said. This, too, was a gradual transition. At first, she continued going to church on Sundays, but later attended Hebrew school and participated in the Gordonia Zionist youth movement.

Today, Hargil fully embraces her Jewish identity and Israel, where she moved with her father in 1948. Three of Kalman’s brothers also moved to Israel. After a short period in Tel Aviv, Iza moved to Kibbutz Ramat Yohanan. Iza’s family decided to change her name to the patriotic name “Israela,” telling her that the name “Iza,” meaning goat in Hebrew, was inappropriate. So for the third and final time, Hargil switched her name — “another change in my life,” she remarked. Four years after they arrived in Israel, Kalman-Karl died.

Hargil served in the army, met her husband and together they traveled to the U.S. and U.K., where she studied art.

Today, Hargil lives in a retirement home in Modi’in, where she moved after her husband died last summer. She has three daughters, five grandchildren and one great-grandchild.

Hargil reflected that despite having been moved from place to place so much during her childhood, moving — even as an octogenarian — was still difficult. Today, she continues to work as an artist, displaying her work — sculptures, collages and presentations of partially eroded photos of her family that were buried in the ground during the war and later retrieved — at exhibitions. She is preparing to open an exhibition at her retirement home at the end of this month.