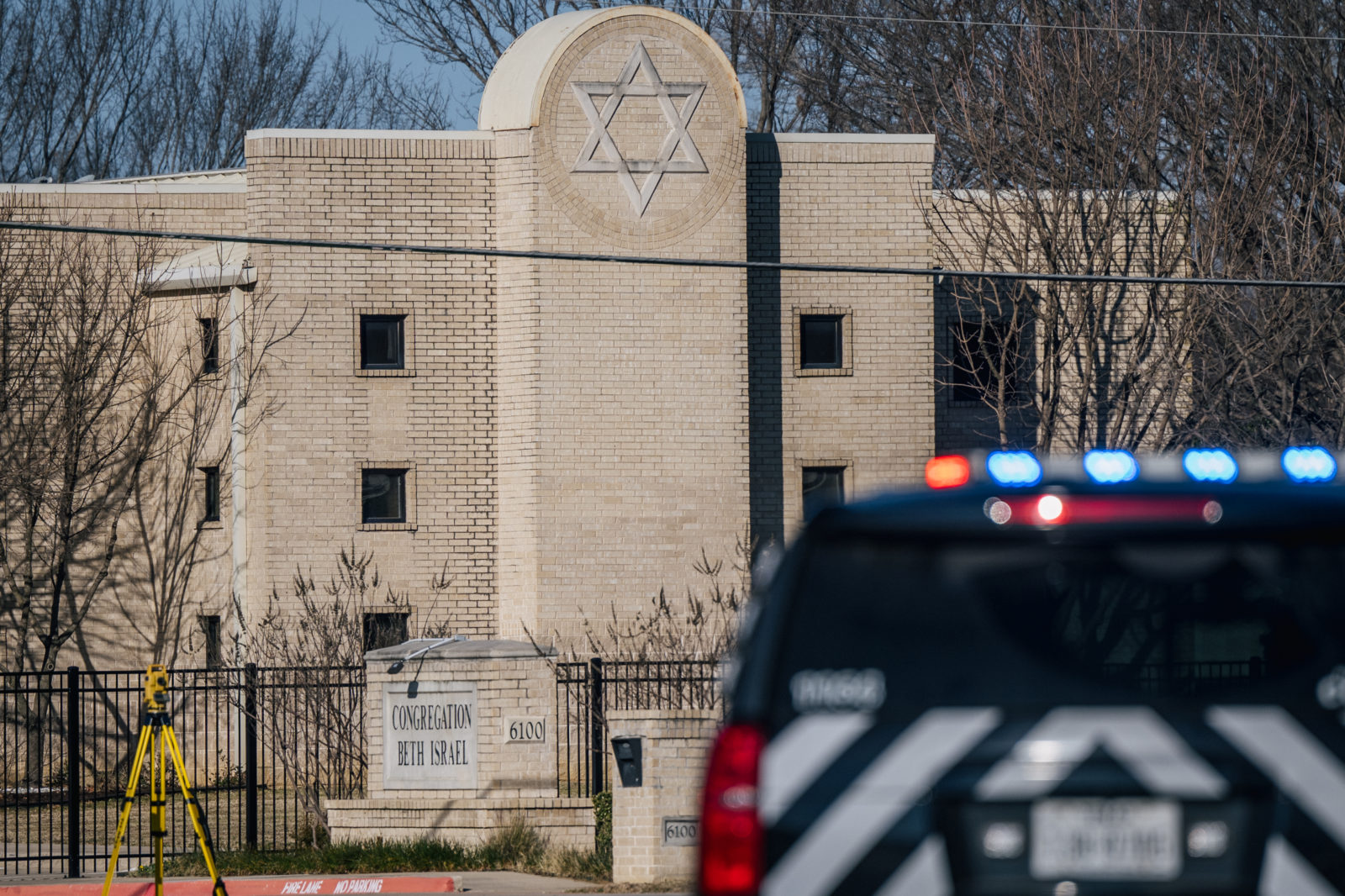 A dispatch from Colleyville following the Beth Israel hostage crisis

'I don’t want to say I can’t believe it happened here because, honestly, we’ve all been on edge,' a Beth Israel congregant told JI

COLLEYVILLE, Tex. — With the exception of a few police cars and a smattering of local and national news reporters, the scene was almost eerily tranquil on Sunday afternoon outside Congregation Beth Israel, the small Reform synagogue where Rabbi Charlie Cytron-Walker and three of his congregants had the night prior been held hostage by an armed assailant for 11 hours.

Across the street, a local Little League team was holding a casual baseball practice, and locals strolled down the idyllically named Pleasant Run Road — which, as a sign up the street revealed, had been “adopted” by the synagogue — in this affluent suburban enclave about 15 miles northeast of Fort Worth.

But even after the hostages had escaped safely, the synagogue remained an active federal crime scene as law enforcement officials processed the site where the suspected gunman, identified as Malik Faisal Akram, a 44-year-old British national, had been shot to death while perpetrating what the Biden administration labeled an “act of terror.”

“The congregation is going to have to face difficult days because someone was killed inside their synagogue,” Steven Hays, a retired public school teacher in Fort Worth who grew up in Colleyville and attends two synagogues in the area but is not a member of Beth Israel, told Jewish Insider in an interview outside the shul.

Stacey Silverman, a congregant at Beth Israel who lives near the temple, said the community had been on high alert since the deadly synagogue shootings in Pittsburgh and Poway in 2018 and 2019, respectively. “I don’t want to say I can’t believe it happened here because, honestly, we’ve all been on edge,” she told JI.

But nothing could have prepared her for what unfolded on Saturday as she tuned into the synagogue’s livestream to watch Shabbat services.

“It was absolutely horrific, terrifying, horrible,” she recalled. “It was one of the scariest days of my life because I was on the live feed and I heard that lunatic ranting for a few hours,” she said of Akram, whom authorities said had demanded the release of Afia Siddiqui, a Pakistani woman who is currently serving an 86-year sentence at a federal prison in Fort Worth for the attempted murder of U.S. officers in Afghanistan.

Silverman, 53, said she was frustrated by initial suggestions that the attack had not been motivated by anti-Jewish hatred. On Sunday, FBI Special Agent in Charge Matt DeSarno had said that Akram “was singularly focused on one issue, and it was not specifically related to the Jewish community.”

“This was not a random event, this is the Bible Belt and there’s a church on every corner. This was completely premeditated,” Silverman said. “The guy was ranting that he chose it. He was ranting about Jews and Israel. He clearly hated Jews, he spent hours ranting against us.”

Because of the Omicron variant, which is now surging in the Dallas-Fort Worth area of northeast Texas, most of the congregants were at home rather than participating in person at the synagogue. “Thank God for that,” she said.

In a statement on Sunday, Cytron-Walker said “the gunman became increasingly belligerent and threatening” in the “last hour” of the crisis.

“Over the years, my congregation and I have participated in multiple security courses from the Colleyville Police Department, the FBI, the Anti-Defamation League and Secure Community Network,” Cytron-Walker said. “We are alive today because of that education. I encourage all Jewish congregations, religious groups, schools and others to participate in active-shooter and security courses.”

“Without the instruction we received, we would not have been prepared to act and flee when the situation presented itself,” Cytron-Walker said.

The rabbi revealed more details of his harrowing encounter in a Monday morning interview on “CBS Mornings.”

“When I saw an opportunity where he wasn’t in a good position, I made sure that the two gentlemen who were still with me, that they were ready to go,” he recalled. “I told them to go. I threw a chair at the gunman and I headed for the door, and all three of us were able to get out.”

Earlier on Saturday, local Jewish leaders reacted with varying levels of disbelief when they heard of the hostage crisis.

Rabbi Brian Zimmerman of Beth-El Congregation, a Reform synagogue in Fort Worth, said he was in the middle of conducting a Saturday morning bat mitzvah service when the attack started. “Our head of security ran up and whispered to the president and me, and I kind of froze,” he remembered. “‘There’s a hostage situation in Colleyville,’ he said.”

Zimmerman, who has known Cytron-Walker for years, went on with the service but described an “out-of-body experience” as he tried to process the event. “My brain didn’t really wander to what did that mean for here, for our place.”

“I would say I’m still processing it,” he told JI. When it ended, “I sort of got this feeling that I’ve never gotten before,” he said. “Thank God it’s OK, but it felt very unresolved.”

Barry Abels, the executive of the Jewish Federation of Fort Worth and Tarrant County, agreed. “You spend so many hours on edge and it takes a while to come to grips with what’s happened and what is the aftermath,” he said in an interview with JI. “The thing that I think everybody’s going to be waiting to hear about is what’s going to be the outcome of the federal investigation into this matter.”

“Obviously, that’s going to take some time,” he said.

Those who know Cytron-Walker, however, all agreed that the rabbi had operated with unusual poise under pressure.

Cytron-Walker took over at Beth Israel in 2006 as the synagogue’s first full-time rabbi, and in the ensuing 16 years he has earned a reputation as an interfaith community-builder who is closely connected with local Muslim and Christian leaders in the area.

“I remember when he was ordained, we all knew that he had elected to accept his pulpit in Texas,” said Rabbi Gary P. Zola, a professor at Hebrew Union College-Jewish Institute of Religion in Cincinnati who once counted Cytron-Walker as a student. “Not all of our students are interested in taking a very small congregation right out of school,” Zola told JI. You have to be the chief cook and bottle-washer, and I think that was what he wanted to do.”

“Charlie was just somebody who was able to reach everybody and to say a good word about everyone and to be liked by everyone,” Zola added.

On Monday evening, Cytron-Walker spoke of his experience being held hostage in his first public remarks to community members at a healing service hosted by White’s Chapel United Methodist Church in nearby Southlake, which was live-streamed on Facebook.

Cytron-Walker, for his part, acknowledged that process but mostly just seemed grateful to be alive. “While very few of us are doing OK right now, we’ll get through this,” the rabbi told the audience.

“Thank God, thank God,” he said. “It could have been so much worse.”