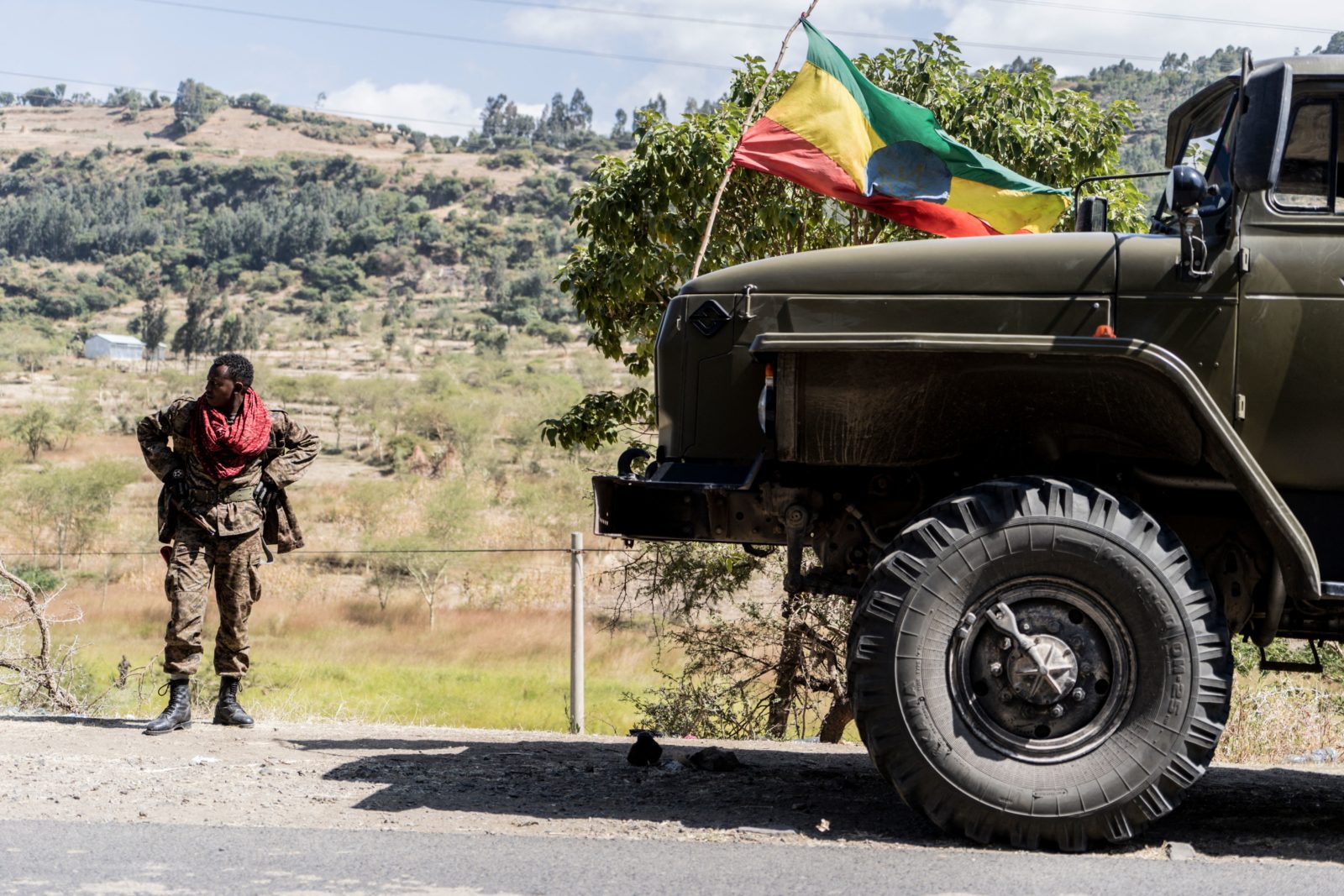 Are Israel and Iran competing on the same side in Ethiopia?

When reports surfaced a few months ago of Ethiopian Prime Minister Abiy Ahmed deploying combat drones in his government’s fight against local militant groups, Israel was paying close attention. Sharing the concerns of other nations, including the United States, that the fighting could destabilize Africa’s second most populous nation, Israelis were also troubled by which countries were among those supplying the East African nation with the latest armed unmanned aerial vehicles (UAVs).

Diplomats and analysts monitoring the 13-month-long civil war in Ethiopia, a fight between government forces and the Tigrayan People’s Liberation Front (TPLF), a regional force that once controlled the federal government, have determined that these arms came from three main sources: Turkey, the United Arab Emirates and, particularly concerning for Israel, Iran.

Iran’s influence on the African continent is not new. The Islamic Republic is known for spreading its extremist ideology, whether via terror proxies or financing mosques and cultural centers, in certain African states. But its appearance in a new conflict, in a country with which Israel has particularly warm relations – including providing arms and military assistance in the past – as well as a place where an already vulnerable Jewish community resides, has placed Israel in a sensitive and curious position.

“It does make for strange bedfellows that Israel and Iran would seemingly be on the same side in a conflict,” Cameron Hudson, a senior fellow at the Atlantic Council think tank, told Jewish Insider.

However, he added, “We don’t have full visibility that there is any intelligence or tactical support being offered by Israel, even though those relationships have existed in the past and Israel’s Foreign Ministry would say Israel is not taking an active role in this conflict.”

Hudson said the situation in Ethiopia was proving highly sensitive for the Israeli government. Recent visits to the country by Israeli officials and Jerusalem’s recent acceptance as an “observer” in the African Union, which is headquartered in Addis Ababa, have been spun by the Ethiopian government as statements of support, he said. Just last week, Israel’s ambassador to Ethiopia, Aleligne Admasu, posted photos on Twitter of aid Israel donated to the Ethiopian Ministry of Women and Social Affairs, saying it was for “the war-displaced people in Ethiopia” and “a symbol of Israel’s diplomatic and people-to-people commitment to Ethiopia.”

“Israel’s official line is that there is a Jewish community there that requires it to maintain ties with Abiy’s government, and the idea that any Israeli government could possibly remotely tolerate a government that faces credible accusations of ethnic cleansing and genocide goes against the core and founding principles of Israel,” added Hudson.

A former director of African affairs at the National Security Council in the Obama administration, Hudson said the civil war in Ethiopia was also proving challenging for other countries with ties to Ethiopia, including the United States, which has been threatening sanctions against Abiy’s government if a cease-fire is not soon in place.

“The Biden administration has put itself out there and now is not living up to the arguments that it made early on in pursuing a more values-based, human rights policy,” Hudson told JI. “Ethiopia is the U.S. gateway to Africa. It’s a diplomatic heavyweight on the continent and in the fight against terrorism, Washington is reluctant to weaken a strong, stable and strategic partner to the US.”

For Iran, however, the chaos of another African conflict has provided an opportunity. Close observers note a marked increase in air traffic between Tehran and Addis Ababa. They warn that U.S. threats to sanction Ethiopia could end up pushing the African nation even closer to the Islamic Republic and believe that after delivering Abiy certain victory in this conflict, he will owe Iran.

Observers also say that for Tehran, Ethiopia is a strategic asset – close to the Arabian Peninsula and Yemen – and the ideal location to wield its influence and build political connections, particularly after losing its traditional base in Sudan, which last September seized control of multiple lucrative assets belonging to Hamas, one of Iran’s main proxies. The move came less than a year after Sudan normalized ties with Israel.

Iran’s encroachment has already been documented by the U.S., with the Treasury Department’s Office of Foreign Assets Control announcing last October sanctions against the Islamic Revolutionary Guard Corps (IRGC) and IRGC Quds Force (IRGC-QF) for “proliferating lethal UAVs” to Ethiopia, among other places.

Last month, the United Nations was also made aware of Iran’s presence by TPLF leader, Debretsion Gebremichael, who penned an open letter to U.N. Secretary-General Antonio Guterres stating, “the drones provided by foreign powers” were perpetuating the humanitarian crisis in Tigray and prolonging the war. He drew a direct line to the three Middle Eastern countries.

“Iran’s intervention in Ethiopia should be triggering alarm bells in Jerusalem that it will use these drones as an instrument of political influence and terror,” Mark Dubowitz, CEO of the Washington, D.C.-based Foundation for Defense of Democracies (FDD), told JI.

“Israel is in an awkward situation because of its ties to Ethiopia,” Jason Brodsky, policy director at United Against Nuclear Iran (UANI), told JI, also warning that there has been “an uptick in arms exports and terror, especially in recent months — with Ethiopia as ground zero for both.”

“Ethiopia has traditionally trodden carefully even in the terror cases, hesitant to directly blame Iran for the plot,” Brodsky continued, highlighting an incident early last year where Ethiopian authorities said they foiled a potential terror attack against the Emirati embassy but stopped short of saying Iran was behind the plot.

However, Brodsky said, the “fact the Emiratis are also supplying Ethiopia with drones does open up an opportunity for Israel.”

The Emirates have been seeking to limit Iranian influence and ease tensions, meeting recently with officials in Tehran. Brodsky said that the UAE’s presence could serve as a check on Iran’s activities in Ethiopia – although some have called for Israel to use its newfound influence with the UAE to halt the sale of such weapons to Ethiopia.

Major (Res.) Danny (Dennis) Citrinowicz, a senior analyst at the Maisha Group Ltd, a risk and security consultancy, added that if Israel wanted to effectively counter the threats posed by Iran then it needed to pay closer attention to events in Africa.

“Africa is becoming the next playground for Iran and becoming another front for Israel,” Citrinowicz, who previously served as head of the Iran branch of Israel’s military intelligence, told JI.

Ethiopia’s use of drones last month, he continued, “was the first time we are seeing Iranian UAVs operating outside the Middle East, and it has allowed Iran to showcase its military capabilities and try out its hardware.”

“Strife in Africa is in no shortage and Iran is seeking to take advantage of those conflicts to prove that it can survive without Western partnerships,” Citrinowicz added. “Abiy used this to preserve his position, and he will always remember how Iran helped him in his time of need.”

So far, Israel has downplayed Iran’s appearance in Ethiopia, hoping the sale was a one-off event for a leader desperate to stay in power and that a cease-fire soon will leave Ethiopia free of sanctions. In the meantime, the Jewish state is trying to balance its concerns with sensitivities amidst a renewed push to bring to Israel up to 5,000 Ethiopian nationals whose relatives have already made aliyah. There are roughly 160,000 Israelis of Ethiopian descent currently living in Israel, including a government minister and a member of Knesset, and many still have relatives in Ethiopia.

Yonatan Freeman, an international relations expert at the Hebrew University of Jerusalem, said, however, that he believed that Israel was paying close attention to all events but opting to stay quiet because of the sensitivities.

“It is in Israel’s interest that Ethiopia remains stable and does not, for example, break up,” he said. “Specifically due to Jews still being there, but also so that Iran does not enter even more into such a power vacuum.”

Freeman said Ethiopia’s new interaction with Iran was likely just about survival and that the government would not risk harming relations with Israel. “What Ethiopia is doing with Iran is about the now and about how to survive. Once the fight is over and they return to the fight for daily life, we will see once again a close relationship with the West rather than with Iran.”