Governors from states including South Dakota, Ohio and New York issued official proclamations as part of the ‘Shine a Light’ campaign organized by Jewish groups nationwide 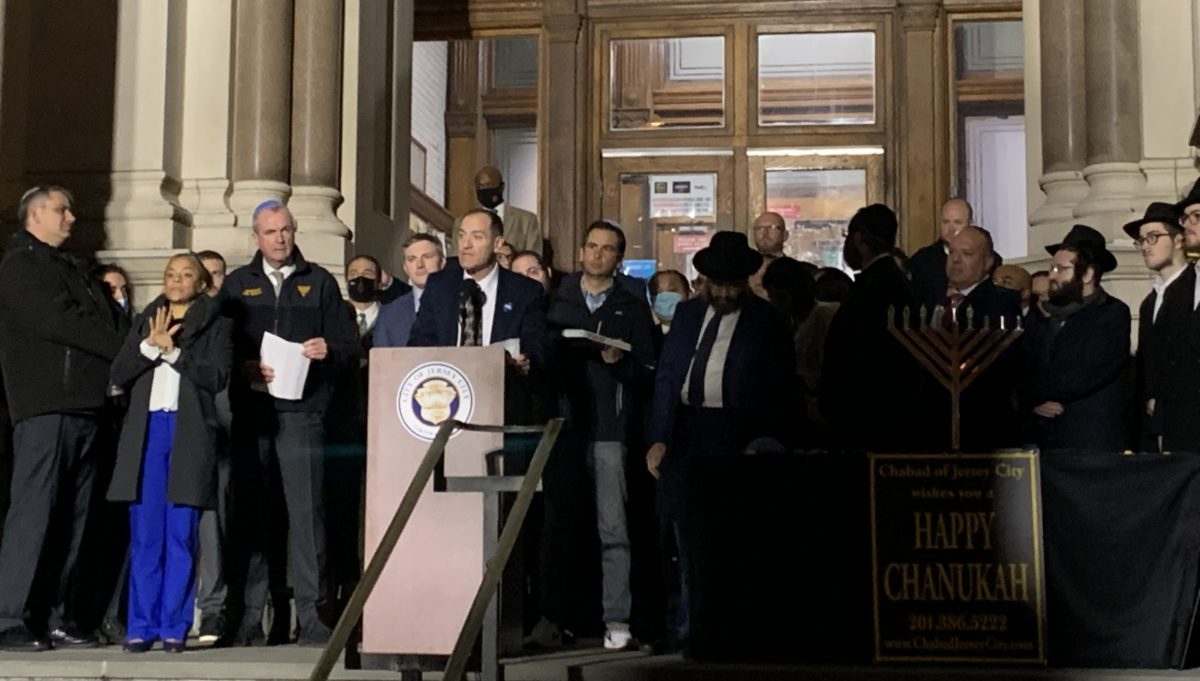 As part of a national campaign that launched during Hanukkah to spotlight and combat antisemitism, Democratic and Republican governors from eight states issued official proclamations throughout the holiday denouncing the threat and vowing to do more to fight it.

“There was a time not too long ago when we as a community were alone, with the government either acting against us or sitting on their hands, while others spewed hate and violence at us,” said William Daroff, CEO of the Conference of Presidents of Major American Jewish Organizations, which was a major organizer of the campaign. “The difference as we sit here in December 2021 is that the government here in the United States is on our side. They are allies. They’re working with us to combat antisemitism, to combat violence against Jews.”

The proclamations were issued as part of the “Shine a Light” campaign, which was organized by the Conference of Presidents in partnership with other groups including the Anti-Defamation League, the American Jewish Committee and The Jewish Federations of North America. Fifty-eight percent of all religiously motivated hate crimes in 2020 were directed toward Jews, according to FBI data.

Jewish communities around the country held public menorah lightings with public officials in attendance. New Jersey Gov. Phil Murphy participated in an event in Jersey City alongside families of the victims killed in the shooting at a local kosher supermarket two years ago. New York Gov. Kathy Hochul attended a large event in Manhattan; other cities hosted mayors, legislators and other local officials.

The effort to get governors to issue official proclamations relied upon connections that local Jewish communities have built with the governors over the course of their many years in public service, according to Jewish community activists who worked on the campaign.

In a state like New York, that relationship is easier, or at least more visible, given the large Jewish population. But South Dakota has the smallest Jewish population in the nation, with around 250 Jews.

“We worked with a few of the local Jewish activists to make sure this got done. They were very helpful, and really provided the guidance with the governor’s office to make sure that this is done,” said Jacob Millner, director of AJC’s Minneapolis office, which works across the Midwest. “In places like New York and in Philadelphia and in Ohio, where we have large Jewish communities and AJC offices and federations and other offices — that’s a different story than a state like South Dakota.”

The proclamation from South Dakota Gov. Kristi Noem spotlighted “members of the Jewish faith [who] have been coming to South Dakota for nearly 150 years as early settlers” and praised “their role as early community leaders in our state and ongoing contributions to our diverse culture.”

Millner called the campaign “part of an effort of the mainstream Jewish community to normalize the IHRA definition of antisemitism.”

The definition, which was adopted by former President Donald Trump’s administration in the form of an executive order directed toward college campuses and embraced by President Joe Biden’s administration, has also been adopted by dozens of countries in recent years. IHRA’s examples af antisemitism include “drawing comparisons of contemporary Israeli policy to that of the Nazis” and “denying the Jewish people their right to self-determination, e.g., by claiming that the existence of a State of Israel is a racist endeavor.”

Most of the governors who issued proclamations expressed their support for the IHRA definition and a commitment to fight antisemitism. Ohio Gov. Mike DeWine wrote a letter to the state’s 111 college and university presidents, laying out concrete steps for the schools to take to “create a culture on our campuses that does not tolerate antisemitic and anti-Israel sentiments or any other type of discrimination.”

The letter came after a number of violent incidents and threats directed toward Jews in the Buckeye State, including on college campuses. In June, six Orthodox Jewish teenagers were shot with a paintball gun while walking in the Cleveland suburb of Beachwood on a Friday night. In May 2020, a man armed with a hatchet and a machete walked into a convenience store near Kent State University’s campus, asking where the Jews were.

“We’re certainly hearing from community members more broadly and, obviously, parents who are really not feeling great for their kids on campus now,” said Howie Beigelman, executive director of Ohio Jewish Communities, the government affairs and community relations group representing Ohio’s eight Jewish communities. DeWine met with members of the Jewish community in the summer, following the upswing in antisemitism after the May Israel-Hamas conflict, which is when they first mentioned unique concerns about college campuses.