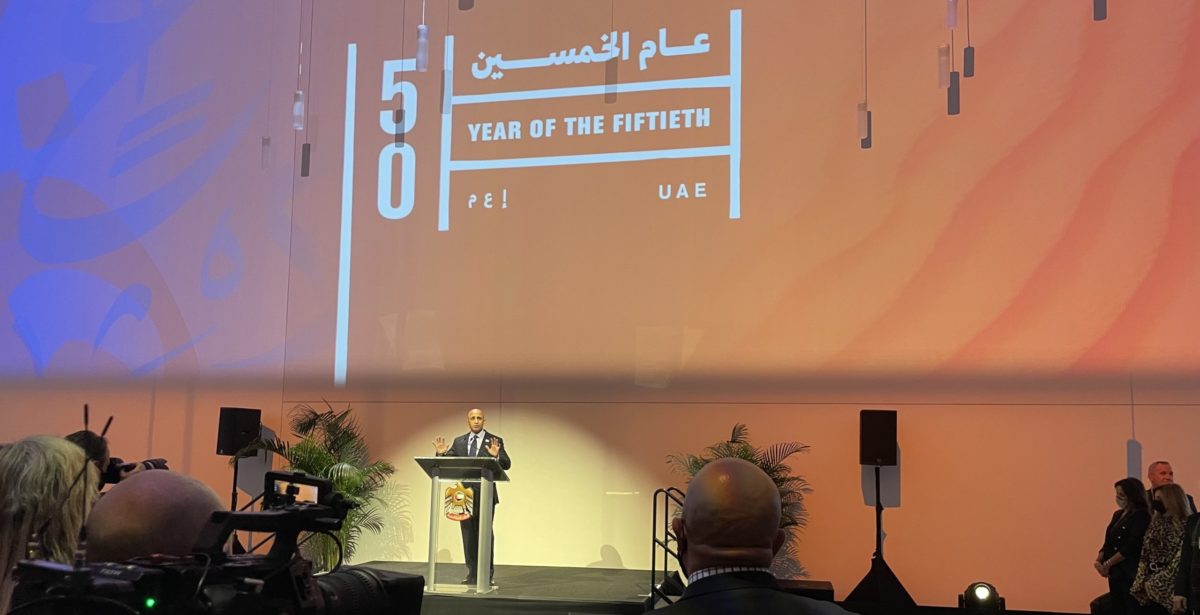 United Arab Emirates Ambassador to the U.S. Yousef Al Otaiba delivered remarks celebrating the 50th anniversary of the founding of the UAE at a ceremony at the Kennedy Center on Wednesday evening:

Back in 1971, a small place on the banks of the Potomac, called the Kennedy Center, opened its doors for the first time.

In the spring of that year, NPR broadcast for the first time coverage of the Senate Committee on Foreign Relations.

Down in Orlando, people flocked to the grand opening of Walt Disney World.

And an MIT graduate, somewhere in his spare time, sent the world’s first email.

And while all this activity was happening here in 1971, 7,000 miles away, a brand new country was born in the heart of the Arabian Gulf.

Fifty years ago, on Dec. 2, leaders from independent Emirates, gathered in Dubai and founded a sovereign country that ultimately became known as the United Arab Emirates.

Today is a remarkable day for my country. And I am extremely honored to represent my country as an ambassador.

I’m so proud of everything that we have managed to accomplish in just five decades. It’s a very long list, and I am not in the business of giving long speeches. So what we’ll do is we’ll do a quick run-through the greatest hits from just 2021.

In 2021, the UAE became a major contributor to the global effort to produce and distribute COVID vaccines for the countries with the most vulnerable populations. And so far, we’ve provided vaccines and medical support to 135 different countries.

In February, we became the first Arab country and the fifth nation ever to reach Mars.

Just this last September, we marked the one-year anniversary of the historic Abraham Accords.

A month ago, Dubai Expo opened its doors for the first time and started welcoming millions and millions of visitors from every corner of the globe.

We also doubled down on our strong advocacy for the global climate change agenda by launching new initiatives with the U.S. and pledging to achieve net-zero carbon emissions by 2050.

I saw John Kerry here, I don’t know if he’s still here. If he is, a big thank you goes to him for everything he’s been doing with us. (applause)

He has been a fantastic partner and deserves just as much credit as all of our guys for making all these things happen.

And also on climate, the UAE was selected to host COP 28, which happens in 2023. Also a big thank you to John Kerry.

And this coming January, next month, the UAE takes a seat on the U.N. Security Council.

None of these achievements, none of these things I just described would have been possible without the man that we’re honoring here tonight. Our founder, our father, His Highness Sheikh Zayed bin Sultan Al Nahyan.

He underscored the importance of unity, a necessity to provide a better life and to ensure stability and realize the hopes and aspirations of our people.

He had the vision and the voice of modernism that would pave the way for our unprecedented development.

But he also knew that the true asset of any advanced country was its people.

He always stressed the importance of education and equality, while staying true to Emirati traditions and values. He recognized the important role of women in advancing our society. He was a champion of gender equality, access to education, and health care to men and to women. And this is back in the early ‘70s.

Sheikh Zayed instilled values of tolerance and inclusion that remained a pillar of who we are today.

From this vision, a nation was formed that embraces the traditions of others, while at the same time proudly holding on to its own.

We are incredibly proud to be one of the most diverse countries in the world, home to over 200 nationalities, and virtually every religion you can imagine.

In fact, there was this diversity that was a catalyst for their historic visit of His Holiness Pope Francis back in 2019.

The Pope’s visit highlighted the ways that followers of the Abrahamic faiths are united not divided.

This is reflected further by the Abrahamic Family House, which will open in Abu Dhabi next year. It will be home to a mosque, a synagogue and a church.

Sheikh Zayed’s legacy of building consensus lives on through our values and interactions with the US and other members of the international community. And 50 years on, the UAE-U.S. relationship has grown to become our most important one with broad human, economic, cultural and security dimensions.

Take the Abraham Accords for example.

With U.S. support, we accomplished something extraordinary that creates a path towards a more peaceful Middle East.

And no, he’s not here. But my Israeli colleague was invited. I think he’s on the way. And I think it’s kind of cool for our 50th anniversary to be the first time we welcome an Israeli ambassador to the UAE National Day event. (enthusiastic applause)

And somewhere on the other side, U.S. Ambassador Tom Nides will be attending UAE National Day in the first UAE Embassy in Tel Aviv. (applause)

In a little over a year, people-to-people connections between Emiratis and Israelis are flourishing. And those connections have generated opportunities in trade and technology and culture and education. And just recently, Emirati, American and Israeli officials met in Washington for a historic trilateral meeting, to discuss ways to deepen that cooperation even more.

Our shared outlook for the region in the world is critical to our efforts of security, peace and stability.

And in a time of unprecedented challenges and adversity, we must continue to collaborate on the most pressing issues of our time.

COVID-19 was a wake up call for all of us. And it really drove home the need for more cooperation, not less.

And we’ve worked tirelessly with the international community to support the logistics and distribution of vaccines worldwide. And we continue to work closely with the U.S. and international organizations to transport millions of doses from the UAE to places with the greatest need.

Both of our countries continue to have an enormous stake in each other’s economic well-being and open trade and investment, and in a speedy global recovery.

And over the last 50 years, we’ve become one of the largest international investors in the U.S. And we’re also the biggest market in the region for U.S. goods and services. And we’re home to thousands of American companies.

As we prepare to take our seat on the [U.N.] Security Council next month, it’s another important opportunity for us to make a significant international contribution and to strengthen relationships with our partners and project our values on the global stage.

In many ways, the courage associated with the Abraham Accords, the Emirates Mars mission, our efforts on COVID and climate. Together, they all represent the culmination of Sheikh Zayed’s vision for the UAE’s place in the world.

These achievements taken together will be our guide star for the next 50 years.

They represent our embrace of diversity, of global engagement and our pursuit of knowledge.

They represent who we are. And they have set the course for our next 50 years of progress. If you all thought the last 50 years were impressive, wait till you see the next 50 years. Thank you so much for being here with us tonight.