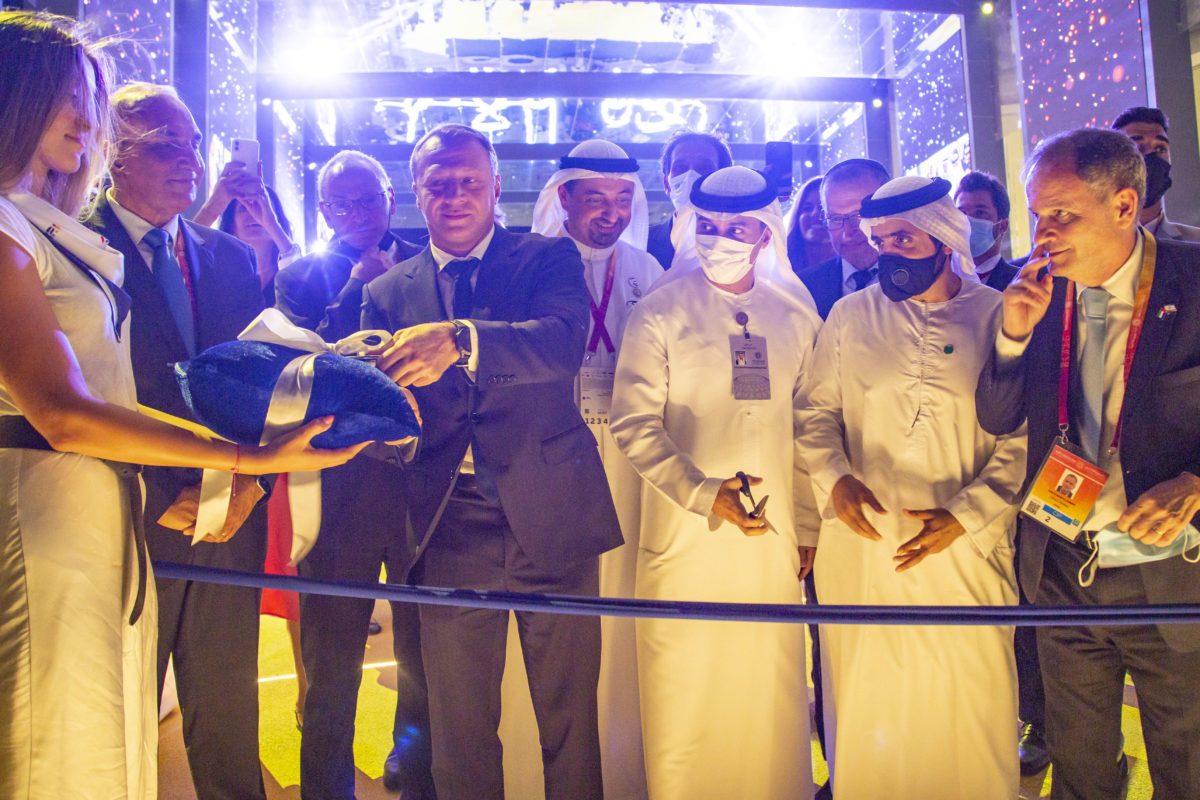 The Israeli Pavilion at the Expo 2020

A group of yarmulke-clad men in suits and women in elegant dresses waited excitedly just outside the Israeli Pavilion at Expo 2020 in Dubai. As noisy crowds entered the adjacent pavilions of India and Italy, the sounds of an Israeli band warming up to play for the pavilion’s opening rose above the din. Despite the blazing temperatures on Sunday, the mood was optimistic: For many, the opening night of Israel’s presence at the world’s fair celebrated prospects for economic and cultural ties between Israel, the United Arab Emirates and the wider Arab world.

While the historic Abraham Accords were signed just over a year prior to Expo 2020 (the event was delayed a year because of the pandemic), the Israeli Pavilion, with its open-air trapezoidal structure, symbolized another significant moment for Israel in the UAE — a few years ago its participation in such an international event in the Gulf would have been unthinkable. The pavilion’s design and architecture were created to reflect the similarities between Israel and the rest of the Middle East.

Visitors entered the main area of the pavilion by walking up a winding walkway built to emulate the form of sand dunes and shaded streets found throughout the Middle East. From a distance, the “dunes” look like they’ve been made from real sand, but a closer look revealed a concrete steel structure topped with sand-colored recycled leather. Like most of Expo 2020, the Israeli Pavilion is about telling a country’s story, particularly how it sees its past and its future. Atop the zig-zagging mount was an open-steel structure where seven 15-meter-high LED screen gates showed videos of Israel’s cultural richness  — from ancient ruins to contemporary dancers, small port towns and enchanting natural landscapes. It’s designed to be a place for people to gather and discuss new ideas.

Dozens of blue and white balloons — a nod to the Israeli flag — filled the pavilion’s inner structure. Israel’s Minister of Tourism Yoel Razvozov delivered a few opening remarks, putting the event into perspective.  “Many things are happening here for the first time. For the first time in history, the Expo fair is being held in an Arab country. It is also the first time there is an Israeli pavilion in a major fair on Arab soil. It is one of the most sound and robust steps toward cooperation between the United Arab Emirates and Israel in history.”

Razvozov then issued an open invitation to everyone to visit Israel. “Peace allows us to forge a new reality in the Middle East that will bring prosperity, security and stability to all,” he said. “We believe that to reach a better tomorrow, one should choose practical and positive actions today. I’m delighted to invite each one of you and each visitor, participant and host at this Expo to come and visit our country. Come and see for yourself what Israel is really about.”

The minister’s words notwithstanding, the high-security measures Israelis are accustomed to were still in place. At the entrance to an indoor conference room was a meticulous security check. Visitors who were invited to this area for conferences or meetings may have felt as if they were embarking on a flight to Israel itself. “You know, we are still in a sensitive environment. Nearby there is the pavilion of Iran,” said one of the security guards.

Those who simply wished to visit the pavilion’s main open-air structure, enjoy the band, and catch images of Israel’s diverse attractions did not have to go through a security checkpoint. In the pavilion’s 360-degree room, a live DJ accompanied a film about Israel’s high-tech innovations and the country’s diversity. “I am an Israeli. My father’s family is Arab. My mother’s family, Jewish,” says the attractive young presenter at the beginning of the film. “Quite a challenge when you are looking for the right tone, people,” she continues, adding with conviction, “follow the beat.”

And the movie’s “beat” is multiethnic, diverse and open-minded. If anything, the pavilion’s upbeat and positive rendering of present-day Israeli society will attract, organizers hope, more tourists from across the Middle East.

The presence of the Israeli Pavilion on Arab soil was an inauguration rooted in heritage but with an avant-garde vision of the future. Before the official festivities began, the ancient Jewish tradition of a mezuzah ceremony — in which a mezuzah is affixed to the doorpost of one’s home — was performed by Rabbi Levi Duchman with a mezuzah case made and designed exclusively for the Expo 2020 Dubai by noted Judaica artist David Roytman. In essence, the Israel Pavilion at Expo 2020 is a new home, albeit a temporary one, for Israelis, Jews and everyone seeking to travel and learn more about Israel.

The pavilion is designed to be demolished after Expo 2020 concludes. Apart from the concrete floor, all materials will be recycled, affirming the organizers’ commitment to environmental issues and tackling the climate crisis. The evening concluded on a contemporary note, with guests dancing to the catchy sounds of Hamalgezot, an Israeli band playing traditional Israeli music, followed by Israeli DJ Abass. As attendees celebrated the pavilion’s opening, the large, illuminated sign at the back of the pavilion’s main area glistened amidst the dazzling lights and moving images from the surrounding LED screens.

In Aravit script, a font invented by typographer Liron Lavi Turkenich that merges Hebrew and Arabic characters, the sign spelled the phrase: “Towards Tomorrow.” In a still somewhat tense geopolitical climate, this was the message Israel strove to deliver — one that doesn’t forget the past but desires to work towards a new beginning.