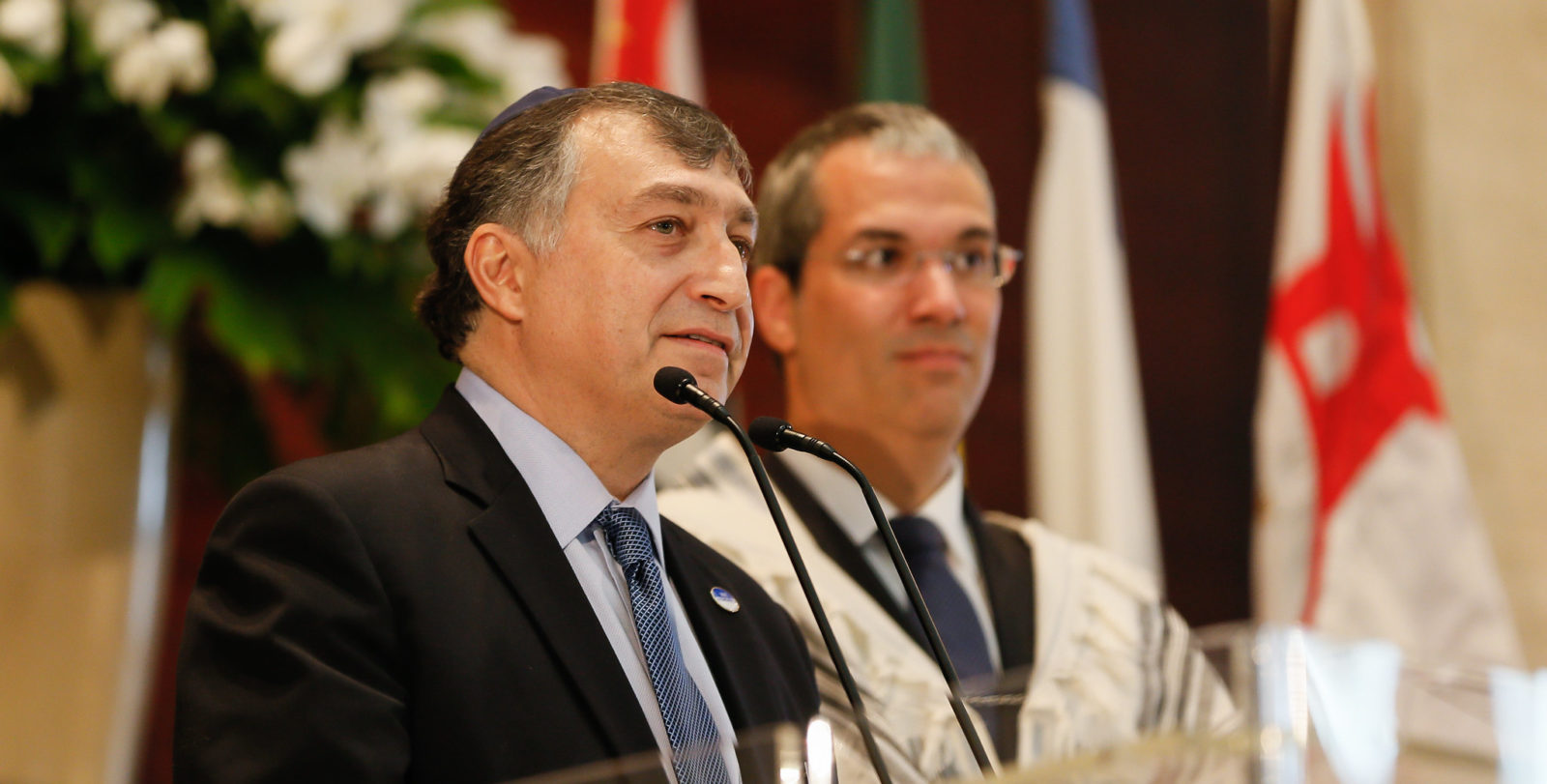 Fernando Lottenberg takes on antisemitism across the Western Hemisphere

As the Organization of American States’s first antisemitism envoy, the Brazilian attorney is thinking bigger than South America

For the first time in its more than 70-year history, the Organization of American States has designated a dedicated point person to tackle antisemitism in the Western Hemisphere.

Fernando Lottenberg, a Brazilian constitutional attorney who previously served as the leader of the country’s Jewish community, began serving as the OAS commissioner to monitor and combat antisemitism last week. His appointment follows an increase in antisemitic beliefs in Latin America in recent years, according to public opinion polling from the Anti-Defamation League.

“I think the [OAS] Secretary General and organization realized that, as it has happened with other countries, such as [the] USA and Canada, [and] regional organizations such as the European Union, it’s ripe in the Americas to have a position like this,” Lottenberg told Jewish Insider in a phone interview from São Paulo yesterday, in which he laid out a hemisphere-wide approach to combating antisemitism.

The creation of the position was announced in a speech by OAS Secretary General Luis Almagro in June at the American Jewish Committee’s annual conference.

“I think that Secretary General Almagro understands [the problem] very well,” said Dina Siegel Vann, director of the AJC’s Belfer Institute for Latino and Latin American Affairs. Vann served as an informal advisor to Almagro as OAS looked for a candidate to fill the position, and she told JI that Lottenberg will be a “model of a partner” in the role.

“The Jewish world pays a lot of attention to Europe, for obvious reasons. But I think that it’s at our own peril as American Jewry not to pay attention to Latin America,” said Vann.

Lottenberg comes to the role after serving for six years as the president of the Jewish Confederation of Brazil, the country’s leading Jewish communal group. With 120,000 Jews, Brazil has the second-largest Jewish population in Latin America, behind Argentina.

And while he is not a well-known figure among Jewish leaders in North America, Lottenberg is committed to working with them in this new role. “It’s important for everybody to remember that [antisemitism] is not something that relates only to Latin America,” said Lottenberg, who added that it is a “common mistake” for people to think that OAS’s purview is only Latin America. In fact, “It includes the U.S. and it includes Canada,” he noted.

The countries in the Americas share core values, Lottenberg argued, and fighting antisemitism is in line with preserving their commitment to democracy. He pledged to work with antisemitism envoys in Canada and the U.S. to “keep our continent as it was promised, a land where people can come and settle and thrive by keeping their identities, and living together in a place where you’re not asked where you’ve come from, but what you do, what you can contribute to your society.”

“This is an important regional and hemispheric appointment,” Cotler told JI. “He will, on his own initiative, bring forth an action plan for combating antisemitism in the Americas, for which we will all benefit.”

In an email, Lipstadt praised the selection of Lottenberg, whom she does not know personally. “I welcome this appointment and, should I be confirmed by the Senate, look forward to working with Commissioner Lottenberg,” she said.

Lottenberg said he intends to focus mainly on education and on international treaties. As a representative of an international organization — OAS is a regional body that promotes cooperation between member states on democracy, human rights and the economy — Lottenberg will not have the power to change laws in the OAS’s 35 member nations.

Cotler said that Lottenberg’s legal background will prove useful as he urges other Latin American countries to adopt the IHRA definition. The definition has already been adopted by the OAS, although many member nations — including Lottenberg’s native Brazil — have not yet signed onto the definition.

“He will be able to articulate how the IHRA working definition is, in fact, grounded in foundational principles of human rights law, of equality law, of our international treaty obligations, because he has that expertise as a constitutional lawyer,” said Cotler.

As an example of the work he would like to do across the continent, Lottenberg referred to his efforts in Brazil regarding the treatment of hate speech within the country’s legal system.

“We have developed, and this is very dear to me, kind of a guide to combat hate speech, especially within the platforms and on the social networks,” Lottenberg said. “Countries differ in their approach [to] the issue of hate speech.”

In the United States, he explained, free speech is enshrined in the country’s Constitution. “The First Amendment gives a much broader spectrum for people to write or to speak. In other countries, for instance, such as Brazil, there is no such attitude,” Lottenberg noted. As an attorney, he created a system to help Brazilian legal professionals identify hate speech.

“We built, with the help of a law school in São Paulo, Brazil, a guide to help legal professionals such as judges, police officers, DAs, etc., to identify when an expression can be characterized as hate speech, and then you can take the legal instruments that are available to punish that conduct,” Lottenberg recalled. “I think we can expand this to other countries in the continent, of course respecting the specificities of each country, each legal system. But the message [is] that hate speech is not something that should be included in freedom of expression.”

Lottenberg laid out three distinct types of antisemitism with which the region contends: “traditional antisemitism, let’s say a right-wing expression”; “some manifestations of anti-Zionism that comes more from the left, especially after [the May conflict] in Gaza, when Jews collectively are held responsible for what happens in the Middle East”; and “Islamic fundamentalism.”

This third strain “is not as prevalent in the Americas as it is in other regions,” Lottenberg said, but it holds great historical significance in South America, where Jews are still reeling from the 1994 Hezbollah bombing of the AMIA Jewish center in Buenos Aires that killed 85 people. Two years ago, Almagro officially declared Hezbollah a terrorist group at AJC’s conference.

The fight against antisemitism in the Americas is not one that Lottenberg intends to tackle alone.

“The Jewish communities are a natural ally,” he said. But, he added, “I believe everybody should be interested in that fight, in combating discrimination — I believe civil society, universities and political leadership that are interested in having a respectful and tolerant environment with regard to minorities should be our natural allies.”