‘In his wallet, my father carried a picture of the boat that brought him to the United States,’ the former Chicago mayor recounted 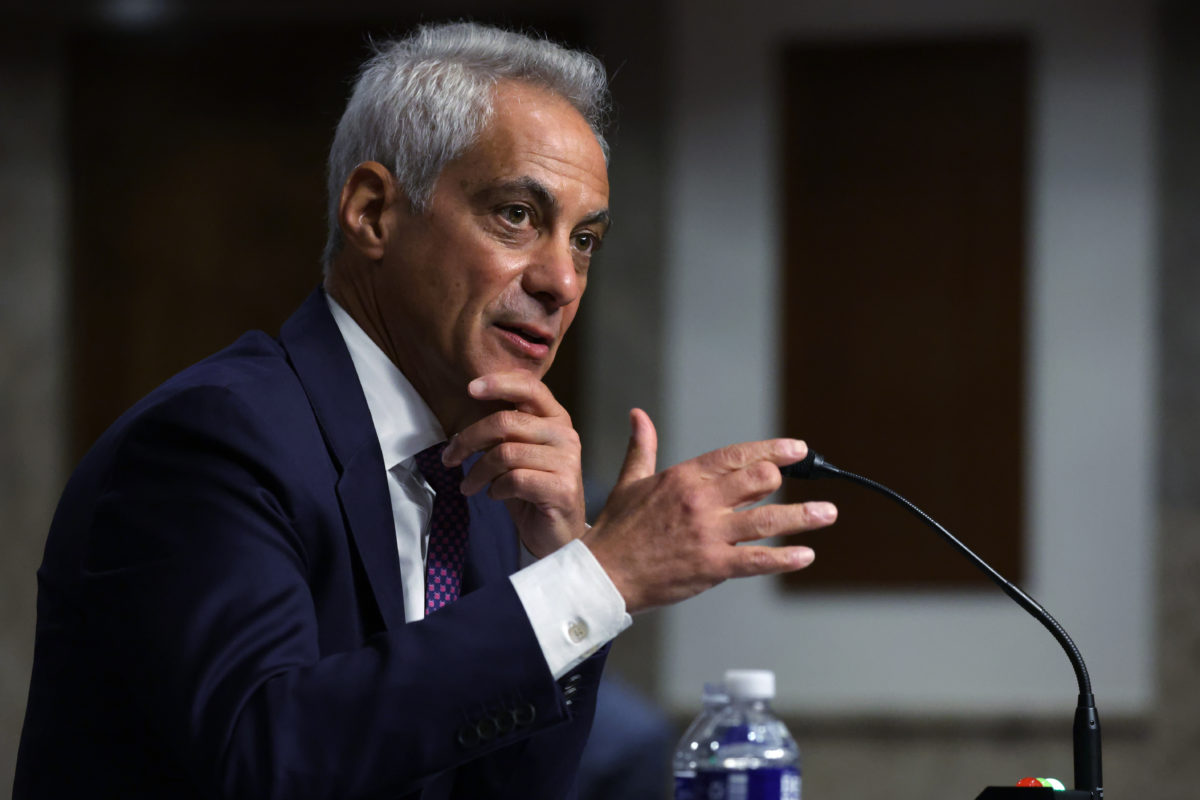 Former Chicago Mayor Rahm Emanuel discussed his family’s Jewish immigrant history at his confirmation hearing for his nomination to be U.S. ambassador to Japan on Wednesday.

Emanuel, flanked by members of his family, spoke at length about his familial background during his opening statement to the Senate Foreign Relations Committee.

“Dr. Benjamin Emanuel immigrated to this country in 1953 with just $13 in his pocket after fighting in Israel’s War of Independence,” Emanuel said, discussing his father. “The drive and values that I have come from my parents who have always loved and supported me — even though I did not become a doctor like my older brother,” referring to Dr. Ezekiel Emanuel, a leading bioethicist.

“For my mother and father, America was a place of possibility,” he continued. “In his wallet, my father carried a picture of the boat that brought him to the United States. That photo represents what he instilled in me and my two brothers: the beacon of hope, possibility and endless opportunity this country is to the world.”

Emanuel also defended his handling of the police shooting of 17-year-old Laquan McDonald during his tenure as Chicago mayor in 2014. At the hearing’s outset, committee Chair Bob Menendez (D-NJ), gave Emanuel an opportunity to speak about his handling of the McDonald case. Some progressives have accused him of attempting to cover up the incident, and a group of Chicago activists led by congressional candidate Kina Collins sent a letter to the committee ahead of the hearing advocating against his confirmation. A group of Illinois politicians also sent a letter urging the committee to closely examine Emanuel’s record.

“I said then, ‘I’m the mayor and I’m responsible and accountable for fixing this so it never happens again,’” Emanuel said. “There’s not a day or a week that has gone by in the last seven years that I haven’t thought about this and thought about the ‘what ifs’ and the changes and what could have been.”

Emanuel explained that he followed city law and policy regarding the investigation, but acknowledged that such procedures “run headlong into… the deep suspicion, mistrust and skepticism that exists in the community about the authorities investigating the authorities.”

He added that he wanted to avoid politicizing or endangering the investigation by intervening unilaterally in it. Emanuel also highlighted his relationship with Pastor Marvin Hunter, McDonald’s great-uncle, who wrote a letter to the committee in support of his nomination.

“He speaks to my person and my character, not just my professional abilities,” Emanuel said. “We have prayed together… gotten to know each other, gotten to talk about — if we had a magic wand — how we would fix what’s broken in our criminal justice system.”

The most contentious moments of the hearing came during an exchange between Sen. Jeff Merkley (D-OR) and Emanuel over the case.

“You are saying you had no idea of the circumstances of the shooting?” Merkley asked Emanuel. “No one had told you that a child had been shot 16 times or that the child was lying on the ground or that a revolver was reloaded?”

“It seems hard to believe that all those things happened but you were never briefed on the details of the situation when you were leading the city,” Merkley said later, referring to McDonald’s family’s request for video of the shooting and the settlement the family reached with the city.

Merkley’s questioning ran for nearly double his allotted time — at which point Menendez cut him off.

Merkley, however, indicated that he believed Emanuel would be confirmed, saying, “Mayor, there is no question… you have this extensive depth and breadth of public service that brings a tremendous amount of knowledge to serving the United States when confirmed.” He did not respond to a question from JI about how he would vote.

Despite the public focus on the McDonald case, the bulk of Emanuel’s testimony focused on his outlook on the U.S.-Japan relationship.

“We are at a critical juncture in American foreign policy in this region,” Emaunel said in his opening statement. “What we build in partnership with Japan over the next three years will determine America’s posture for the next 30. The challenges and opportunities we face underscore the imperative of strengthening our bonds with our closest ally, Japan.”

Entrepreneur Jonathan Kaplan, the administration’s nominee to be U.S. ambassador to Singapore, testified alongside Emanuel on Wednesday without incident.

Risch told Jewish Insider he thought both Emanuel and Kaplan “did well,” stating that he’ll “probably” vote for them.

On Tuesday, ahead of his confirmation hearing, some Democratic senators were reportedly less solid in their support for Emanuel — Sens. Ben Ray Lujan (D-NM), Jon Ossoff (D-GA) and Raphael Warnock (D-GA) said they had not yet decided how they would vote.