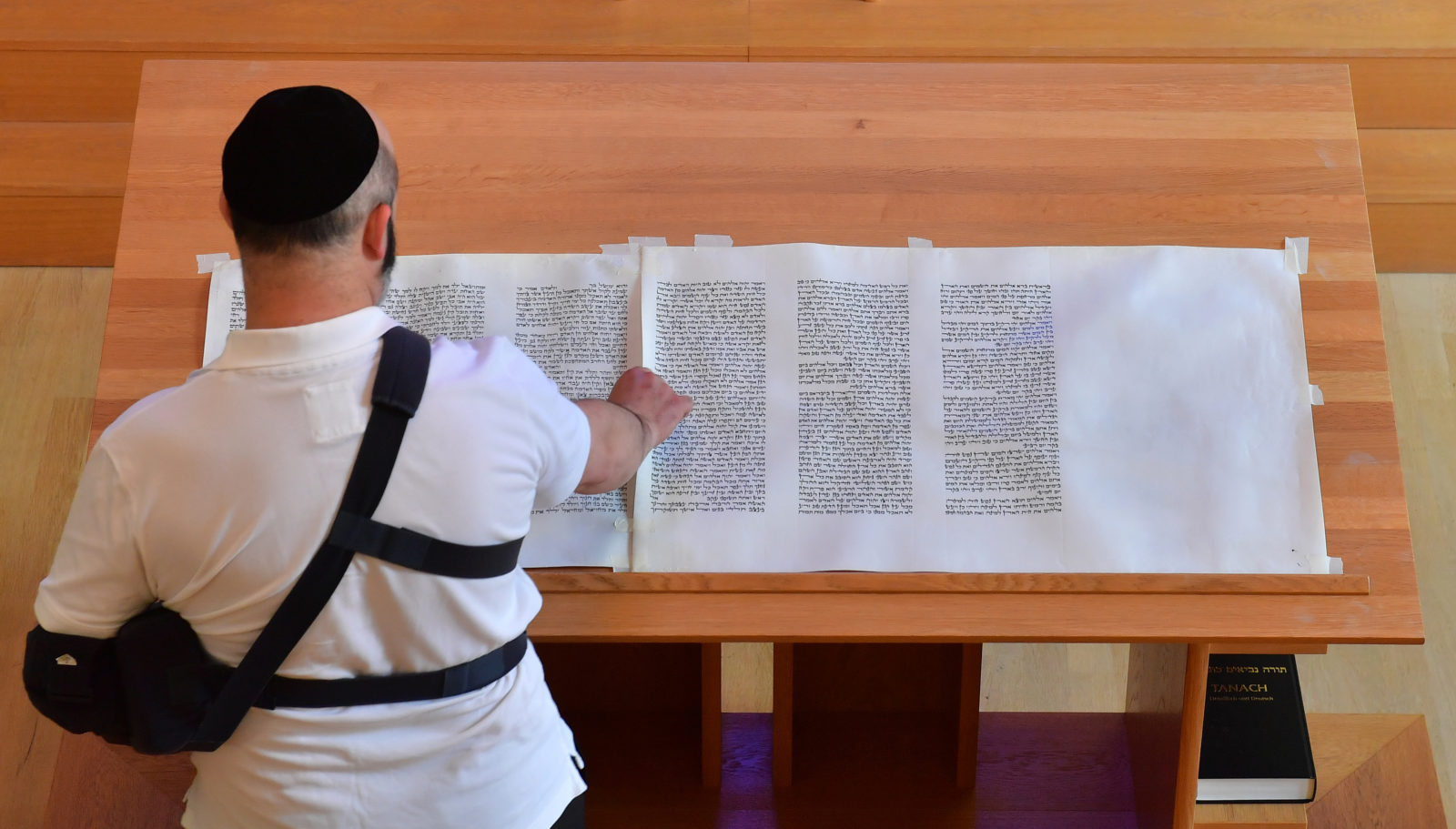 Bringing the Torah to the blockchain

No, that’s not the cost of the physical ark Noah used to save Earth’s animals when God flooded the planet. Nor would that money get you a book about the famed boat or a painting depicting the Flood.

That amount of money — equal to the current value of one coin of the cryptocurrency Ethereum — would get you a non-fungible token (NFT) of the Torah portion Noach, the section of the Torah where the classic biblical tale appears. The buyer would get a piece of digital artwork that represents the themes of the parsha. The cryptocurrency they used to make the purchase would go toward funding the writing of an actual Sefer Torah.

The parsha NFTs are part of NFTorah, a new project that is using cryptocurrency and digital assets to fund the writing of 18 Torah scrolls.

“We want to try and give a deeper, lasting, eternal value to the technology itself, that it can be used for something truly transcendent,” said Mordechai Lightstone, a Chabad-trained rabbi who co-founded NFTorah and also runs Tech Tribe, an organization for Jews who work in tech. “I want tech people to see that what they’re doing is something that has value to their Jewish selves as well.”

The buying and selling of NFTs exploded earlier this year, particularly after the $69 million sale of an NFT from the digital artist Beeple went viral in March 2021. “The idea is that scarcity creates value,” NPR explained at the time. NFTs are purchased with cryptocurrencies such as Ethereum and Bitcoin, which saw their value skyrocket during the pandemic.

NFTs are unique digital assets, and the transfer of NFTs is recorded on the blockchain, meaning that there is a digital ledger of all purchases of the assets. This generally allows for an artist to get paid every time their work is sold, and it also allows people to see who the original purchaser was.

So the original buyer of, say, the Parshat Noach NFT could then transfer ownership to her son for his bar mitzvah, and that transfer will be recorded in the blockchain. The project is nonprofit, and the NFT purchases (which are really donations) will be tax-deductible.

The parsha NFTs are available on OpenSea, a massive online NFT market. Right now, only the first eight Torah portions are available for purchase, but the goal is to eventually make all 54 available as NFTs, and to sell them over the course of the year that it takes a sofer, or scribe, to write an entire Torah scroll. A couple have already been sold.

“The impetus of the project was to bring the benefits of blockchain technology to the very real and tangible… performing [of] this wonderful mitzvah of creating a Sefer Torah,” said Jonathan Caras, the Israeli-based chief technology officer of crypto hedge fund Lionschain Capital and a co-founder of NFTorah.

The idea to fund the writing of a Torah by selling NFTs has its roots in a long-running practice first promoted by Menachem Mendel Schneerson, the Lubavitcher Rebbe, Lightstone explained.

“In the ‘80s, the Lubavitcher Rebbe launched a campaign that every Jewish man, woman and child should get a letter in a Torah, meaning they would pay a small amount of money — really talking about a dollar, whatever it is — to pay towards the writing of an entire scroll,” said Lightstone. “That entire scroll will be written as if every letter is critical to the Torah. If it’s missing one letter, the Torah’s no good. So by the fact that you paid for that one letter, in essence, your letter is the letter that made the Torah scroll.”

The scribe who will be writing the Torahs funded by NFTorah will be paid in Bitcoin, likely the first time a sofer — a highly skilled profession that requires years of apprenticeship — will be paid in cryptocurrency. A new Torah costs between $70,000 and $150,000, according to Caras.

“We like to think of it as the first NFT that touches the digital, physical and spiritual levels of things,” said Lightstone.

But NFTorah goes beyond simply touting the potential spiritual benefits of NFTs and blockchain. The project’s mission is rooted in the notion that the Torah is actually a form of the technology itself.

“Judaism is the original blockchain,” Caras argued. “It’s expressed by handing down the Torah from one generation to the other.”

“The Jewish people have kept the Holy Torah as an unbroken chain for over 3,000 years,” NFTorah’s website says.

The target demographic is made up of members of the Jewish community who identify as religious or traditional and who already own Ethereum, and who want to show that blockchain technology can have a Jewish application. They want to be able to show that “it is just a click away in order to be able to help out a good cause and a big mitzvah,” Caras explained.

NFTs have not yet been widely adopted, even if they have gotten a flurry of press coverage in recent months and some large investments from art collectors and wealthy tech entrepreneurs. But Lightstone argues that it is, actually, very Jewish to be working on the cutting edge of a new technology.

“Technology isn’t just there as something to stand distinct from, let alone in opposition to Judaism, but rather there exists in the world the ability to use technology’s innovative power to promulgate Judaism even more,” he said.

He pointed to the printing press as an example: “There was a huge number of Jewish books printed at that time because Jews saw this as an amazing means to be able to get what they cared for out there.”

Eventually, NFTorah hopes to sell 18 NFTs for each parsha, to fund 18 Torahs. The first, which will be completed sometime next year, will go to Arugot Farms, a settlement in the West Bank with an organic farm and a retreat center. The second will go to Tech Tribe, Lightstone’s Brooklyn-based organization for Jews in tech, and the third will likely go to a Jewish community in Austin, Texas — a city with a growing startup and tech ecosystem.

The goal is to “create something that will excite the local community,” Lightstone said. “By using this technological way of approaching it, I think it speaks to techies and gets them excited.”