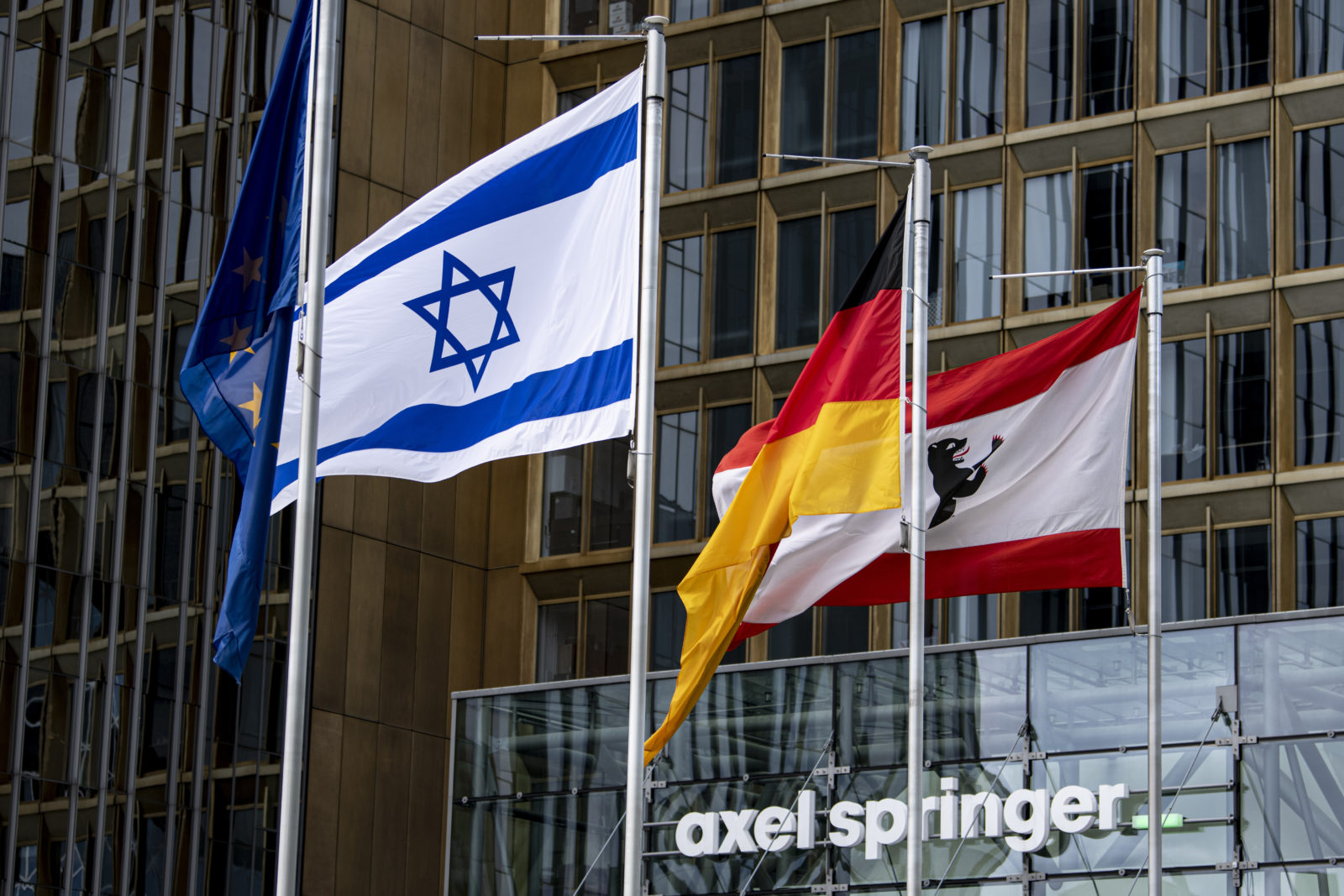 As the German publishing giant Axel Springer prepares to acquire Politico in a high-profile transaction valued at more than $1 billion, questions have arisen concerning the degree to which the scoop-driven Beltway news site will adapt to a long-standing set of corporate values held by the European media conglomerate, including staunch support for Israel.

Axel Springer is guided by a list of core principles, known internally as the “essentials,” that promote a “united Europe” and the “trans-Atlantic alliance” while supporting “the Jewish people and the right of existence of the State of Israel,” among other things.

The mission statement was largely enshrined more than 50 years ago by the company’s eponymous founder, an outspoken anti-communist and pro-Israel advocate who died in 1985. But Axel Springer remains fiercely committed to its five essential values, which editorial employees at German-language publications like Bild and Die Welt are contractually committed to uphold.

Whether Politico staffers will face a similar mandate has been a source of ongoing speculation since the deal was announced late last week. Launched in 2007 by an enterprising pair of former Washington Post reporters, Politico inscribed no such lofty principles in its founding mission statement, claiming simply that its “job” was “to win an audience” with “reporting that presents the news fairly, not through an ideological prism.”

In a recent interview, Robert Allbritton, who currently owns Politico, seemed to have cleared things up. The publishing mogul revealed to New York Times media columnist Ben Smith that employees will not be required to sign Axel Springer’s mission statement when the sale goes through at what is expected to be the end of the year.

But while technically accurate, the disclosure appears to have obscured just how seriously Axel Springer is committed to furthering its values, a process it is poised to ramp up in the coming months, even if some staffers aren’t expected to pledge their support in writing.

On Wednesday, Smith shared a statement on social media from an Axel Springer spokesperson who clarified that the company’s “five essentials apply to all employees in all countries and all markets.” Though the values are “not signed in contracts in non-German markets,” the spokesperson added, “they are regarded as core values of the company, in future also for Politico.”

In an email exchange with Jewish Insider, the spokesperson, Malte Wienker, suggested that the focus on contracts was ultimately misguided and perhaps even irrelevant since “the five essentials” already represent “an integral part” of Axel Springer’s company-wide code of conduct.

Until recently, the values had not been included in the code. But a couple of years ago, Axel Springer’s executive board decided its guiding principles should pertain to every employee, not only journalists in Germany who had signed the mission statement, as the company went private amid an aggressive international push culminating most recently in the acquisition of Politico.

Following the publication of his column, Smith added on Twitter that he was checking with Axel Springer if it would “fire a Politico employee who thinks Israel should be a binational state” — an arrangement that some critics argue could lead to the ethnic marginalization of the Jewish people and diminish their right to self-determination..

“Of course not,” Wienker, who is Axel Springer’s director of corporate communications and sustainability, said in a response posted publicly by Smith. “It is very important to emphasize that behind the essentials is by no means a call for our journalists to push a political agenda with their reporting or to report uncritically on certain topics. Editorial independence is one of our unshakeable principles.”

But Wienker’s response only addressed reporting standards, whereas the question sought to address a potential point of disagreement over an employee’s personal views on a charged issue. Wienker declined to elaborate further on Thursday when asked by JI for additional comment.

In mid-June, Axel Springer, which owns a number of websites in Israel, found itself fielding criticism from some workers who took issue with the company’s decision to fly the Israeli flag outside its Berlin headquarters during the conflict with Hamas.

But Mathias Döpfner, the company’s CEO, who has described support for Israel as “a German duty,” stood firm.

“I think, and I’m being very frank with you,” he told Axel Springer’s approximately 16,000 employees in a company-wide conference call, “a person who has an issue with an Israeli flag being raised for one week here, after antisemitic demonstrations, should look for a new job.”

A spokesperson for Döpfner declined to comment on the Politico sale.

Lately, however, Axel Springer seems more dedicated to acts of persuasion as it seeks to rally employees around its preferred values. At a recent company-wide town hall, streamed live from Berlin on June 14 and previously unreported, Döpfner announced that Axel Springer was embarking on a renewed effort to promote the essentials.

The idea, he informed staffers, originated from a youth council meeting with executive board members. During the discussion, younger colleagues wondered why the company’s five values only seemed to apply, as they have traditionally, to German journalists rather than, say, call-center agents at StepStone, an online job site owned by Axel Springer, or tech reporters at Insider who are likely unfamiliar with the principles now promulgated in the code of conduct.

“We came to the conclusion,” Döpfner said in a revealing presentation, dubbed “Berlin Calling,” while standing before a green screen listing the values in order, “we want to make sure that these essentials are relevant and apply for all 16,500 employees at Axel Springer today.”

The values are “truly something that should be important for everybody, so we want to start this process of discussion with all of you, but we also then want to make sure that it is a common motivator,” Döpfner continued as he turned his attention to the apparent elephant in the room. “I think particularly these days, where we have new waves of antisemitism and the military escalation in Israel, the second essential is very concrete and very meaningful, you could say, to a certain degree, even for some people controversial.”

The 58-year-old Axel Springer chief then invited a fellow colleague at Yad2, the Israeli classifieds portal, to join him on screen for a conversation about how the company’s stance on Israel has resonated for her personally.

Döpfner, anticipating possible criticism of the company’s cherished value, put forth a rejoinder. “Nevertheless,” he countered, “a lot of people are asking the question, well, isn’t that second essential a kind of bias because we support explicitly the right of existence of Israel? How about Palestine? And isn’t that kind of one-sided?”

“I’m not a political person,” she replied. “You know, the Israeli-Palestinian conflict is very complicated.”

Nearing the end of the exchange, Döpfner transitioned to a personal note of his own.

“On the other hand, there is not only the Israeli perspective, there is also the German perspective,” he said. “I have to say that, for me, it’s quite a terrible experience to talk to more and more friends here in Germany, Jewish friends, who are seriously discussing whether they should leave Germany because they feel unsafe on German streets if you wear a kippah, if you speak Hebrew, if you identify as a Jew. It gets more and more unsafe.”

That this “happens in Germany, the country that organized the Holocaust and killed six million Jews, it is unconceivable for me,” Döpfner lamented. “I feel a real shame, and also for that reason, I think it is important that we are making a clear point here.”

Döpfner encouraged viewers to participate in advancing Axel Springer’s essentials by sending questions to the executive board.

The project, which remains somewhat nebulous at the moment, will likely be rolled out in a more comprehensive manner after the Politico deal is finalized.

“We think this is truly something that should be important for everybody,” Döpfner emphasized in the presentation, “so we want to start this process of discussion.”