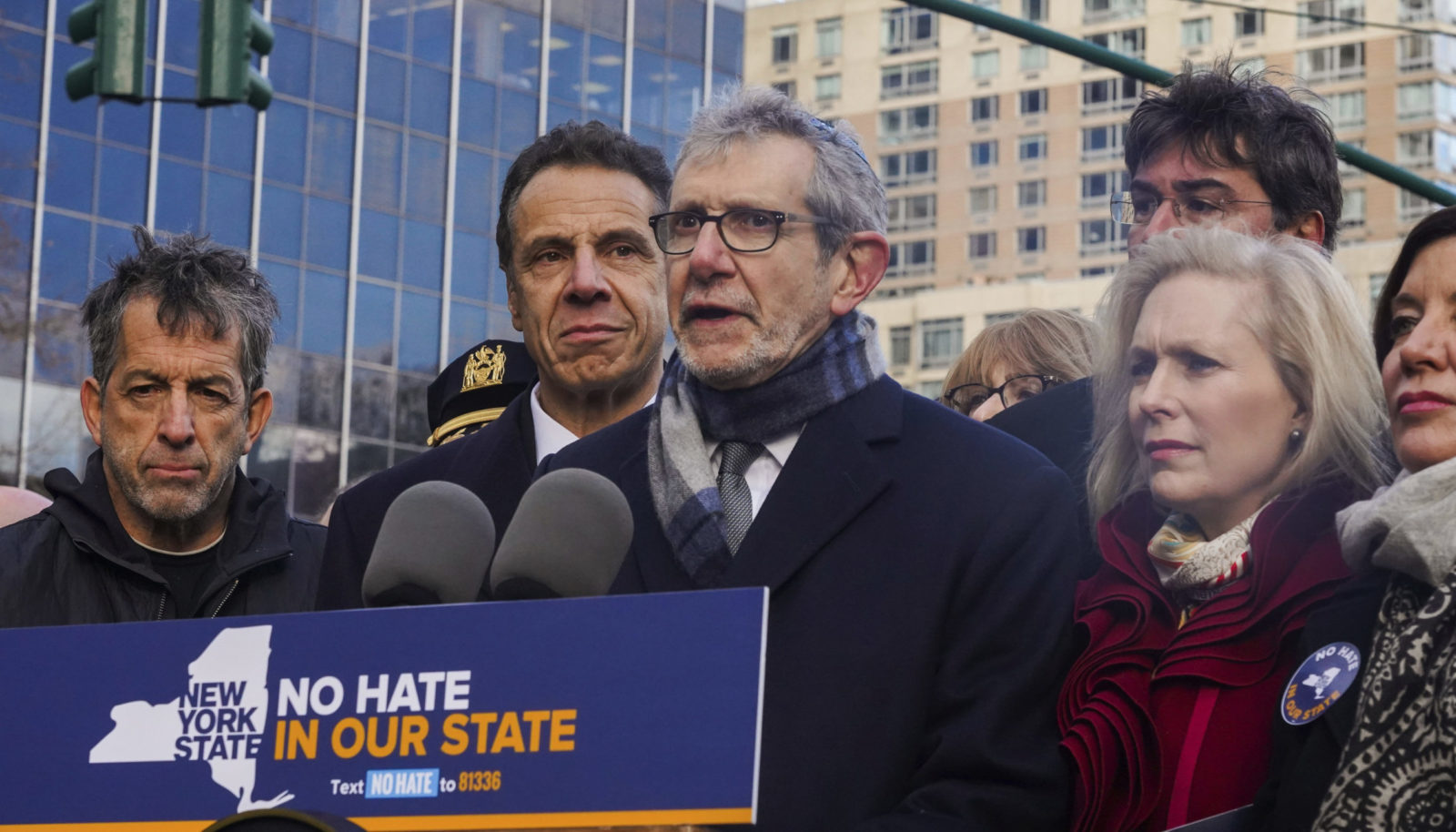 On July 1, Rabbi Michael Miller, the longtime CEO and executive vice president of the Jewish Community Relations Council of New York, quietly stepped down from the organization to which he has dedicated half his life.

Throughout more than three decades of service, the mild-mannered rabbi, 72, established a reputation for himself — largely behind the scenes — as a deeply respected faith leader, navigating such crises as the Crown Heights riot, the murder of teenager Ari Halberstam and the recent conflict between Israel and Hamas, which coincided with an uptick in antisemitic incidents in New York.

But a week before his departure, Mayor Bill de Blasio saw to it that Miller got his due.

“The most diverse place on earth needs shepherds who make sure that all our communities stay in communication, that even in times of crisis we find unity and that we support each other, create solidarity between communities,” de Blasio said appreciatively in his daily press briefing. “No one has done that more, for years and years for this city, more than Rabbi Michael Miller.”

Holding up a proclamation as a parting gift to the man he described as a “friend” and “treasure,” the mayor proudly decreed “Thursday, June 24, 2021, in the City of New York as ‘Michael Miller Day.’”

While Miller is hardly a household name in New York City, de Blasio’s enthusiastic tribute was a testament to the rabbi’s commanding influence in Jewish communal life and beyond. Beginning in the mid-1980s, with the JCRC then entering its second decade, Miller helped transform the fledgling nonprofit organization into the city’s leading mainstream Jewish group.

The JCRC represents the Jewish community to New York government officials and counts more than 50 local Jewish groups as members. Its portfolio includes intergroup relations as well as domestic affairs, missions to Israel and safety and security.

Recently, Miller helped lead a vaccination drive for Holocaust survivors living in New York amid the pandemic, an effort de Blasio singled out for praise in his media briefing last month.

At a certain point, however, Miller concluded that it was time to give someone new a chance to shape the direction of the JCRC. “This is a decision that I made,” he said in a recent Zoom interview with Jewish Insider from his office in Manhattan, shortly before retiring. “It’s not a decision which was forced upon me, and I think that it’s the right time for a younger person to step in.”

Leaving at age 72, he said, seemed fortuitous enough. “It’s a multiple of chai,” Miller quipped, referring to the Hebrew word for life associated with the number 18.

His successor is Gideon Taylor, a commercial real estate executive in New York who previously served as the executive director of the Claims Conference, which seeks restitution from Germany for Holocaust survivors.

“We’re going through various changes, and the person sitting at this desk will be looking much more long-term than I can,” Miller said. “Having somebody here who can look forward not in days or in months or in a limited number of years but for a decade or more, I think, is going to be very helpful to the organization, and I think it will be helpful to the community.”

He isn’t completely severing ties with the organization. Miller now holds the title of CEO emeritus and will continue on as a consultant as the JCRC manages the transition to new leadership.

His institutional knowledge will no doubt prove invaluable as the organization navigates a changing political atmosphere. “There’s many things that have happened over these three and a half decades,” Miller said, “so the important piece of it for me is the evolution of the organization and dealing with these matters.”

The JCRC, which Miller characterizes as “fundamentally a center-based organization,” has more recently contended with a leftward shift in New York City politics, particularly around Israel. Last August, for instance, the New York City chapter of the Democratic Socialists of America distributed a questionnaire asking that City Council candidates pledge not to visit Israel if elected — a direct attack on the JCRC, which has been leading local elected officials on missions to the Jewish state for more than two decades.

One such trip was criticized by Dianne Morales, a candidate for mayor in New York City’s recent Democratic primary, as “propaganda,” according to leaked audio obtained by The Forward.

“It was just kind of insulting for her to say that,” said Miller, who recalled having dinner with Morales after the trip and hearing no such reservations. “If she had to say that, say it to me. Don’t say it to others.”

Miller’s approach to those he may disagree with has most often been even-keeled.

“The rise of political progressivism has been a significant challenge to the mainstream Jewish community, and part of what I believe we need to engage in is communication with influencers who are progressive,” Miller told JI. “That’s one of the reasons why I’ve decided to step aside, because the vast majority of those progressive political figures and communal figures are much younger than I am and are going to be on the scene, most likely, for decades to come.”

In his final years at the helm, Miller sought to initiate such conversations himself. Though he struggled to secure a meeting with Rep. Alexandria Ocasio-Cortez (D-NY) during her first term, he had better luck this past spring, when he interviewed the Bronx congresswoman for 38 minutes as part of a series of conversations with New York representatives.

The conversation, which touched on the Israeli-Palestinian conflict as well as Ocasio-Cortez’s own “sense of spirituality,” was ultimately a fruitful one, Miller said at the time. “The interview has concluded and we still want to continue to engage,” he told JI last April. “From my perspective, this was an opening.”

Miller hopes to pursue similar discussions in his capacity as CEO emeritus. “These issues don’t go away, they evolve,” he said. “Intergroup relations, racial tensions over the past three and a half decades have evolved. Some might view this as a negative. I, of course, like to view it as a positive.”

“I have seen the evolution,” he added. “I have also seen the evolution of leadership, of leadership internal to the Jewish community, external to the non-Jewish community, further externally to the political world. And some come, some go, some remain. Who do we deal with? Who do we talk to? The most important aspect or factor in dealing with the community relationship agenda is communication.”

Miller, whose executive position ran parallel with five mayoral administrations, has talked to them all.

He recalled a meeting with Ed Koch, New York City’s charismatic former mayor, in the late ’80s. “The meeting was in the Blue Room in City Hall, and the discussion was around Crown Heights,” Miller told JI. “I was a young whippersnapper, and you’re sitting there with Ed Koch, who was a-larger-than-life character and figure. But I wasn’t shy and I said, ‘Mr. Mayor, Crown Heights is a tinderbox, and it’s not going to take very much for Crown Heights to explode.’”

“Well, one thing that did explode was Ed Koch,” Miller added. The mayor “tore into me for using that expression of ‘tinderbox’ because it was on his watch. Well, it was just a couple of years later that yes, indeed, it was a tinderbox, and the place did explode.”

Miller was just five years into his leadership role at the JCRC when, in the summer of 1991, racial tensions between Black and Hasidic residents in the Brooklyn neighborhood of Crown Heights violently escalated.

The young rabbi, whose organization describes the riot as a “pogrom,” was featured in Anna Deavere Smith’s one-person play, Fires in the Mirror: Crown Heights, Brooklyn and Other Identities. “I went to see the show, and I forget exactly what she was wearing on her head,” Miller told JI. “It might have been a red yarmulke. So I waited at the stage store for her to come out.”

“I said, ‘You know, you’ve got this thing on your head. I don’t wear that kind of yarmulke. I wear the knitted types,’” Miller remembered telling Deavere Smith.

Later, as she was preparing for a TV broadcast of the play, Deveare Smith called Miller and asked to borrow one of his own personal skullcaps. He happily obliged. “If anybody ever watched ‘American Playhouse,’” he said, “that was one of my kippot.”

Miller graduated from Yeshiva University High School and then went off to Israel for a year of study in 1967, his visit coinciding with the Six-Day War. “That had made a very deep impression on me,” he said. “It was a searing experience.”

Back stateside, Miller sought his ordination as a rabbi, continuing in the tradition of his late father, who was also a rabbi and served as president of the Claims Conference. Miller volunteered for the U.S. Army, serving as a chaplain in Fort Knox, and then took a position as a rabbi in Springfield, Mass., ministering to a large Orthodox congregation while serving as a chairman on the Jewish community relations committee of the local federation.

In 1983, he traveled to the Soviet Union and visited with refuseniks, smuggling in Judaica. “It was daunting,” he said of the trip, which he did alone.

It was after that experience that Miller decided he wanted to dedicate his life to the Jewish community, not as a pulpit rabbi but as a Jewish organization professional. He was hired the following year as director of Israel international affairs at the JCRC by Malcolm Hoenlein, whom he succeeded as executive director in 1986.

Now 35 years later, Miller is the one handing the reins over to his younger charge.

“People say you love your job,” Miller said. “It’s impossible to love this kind of a job. The weight of the responsibility isn’t enjoyable. But it’s more of a mission, and that’s what I’ve committed myself to.”