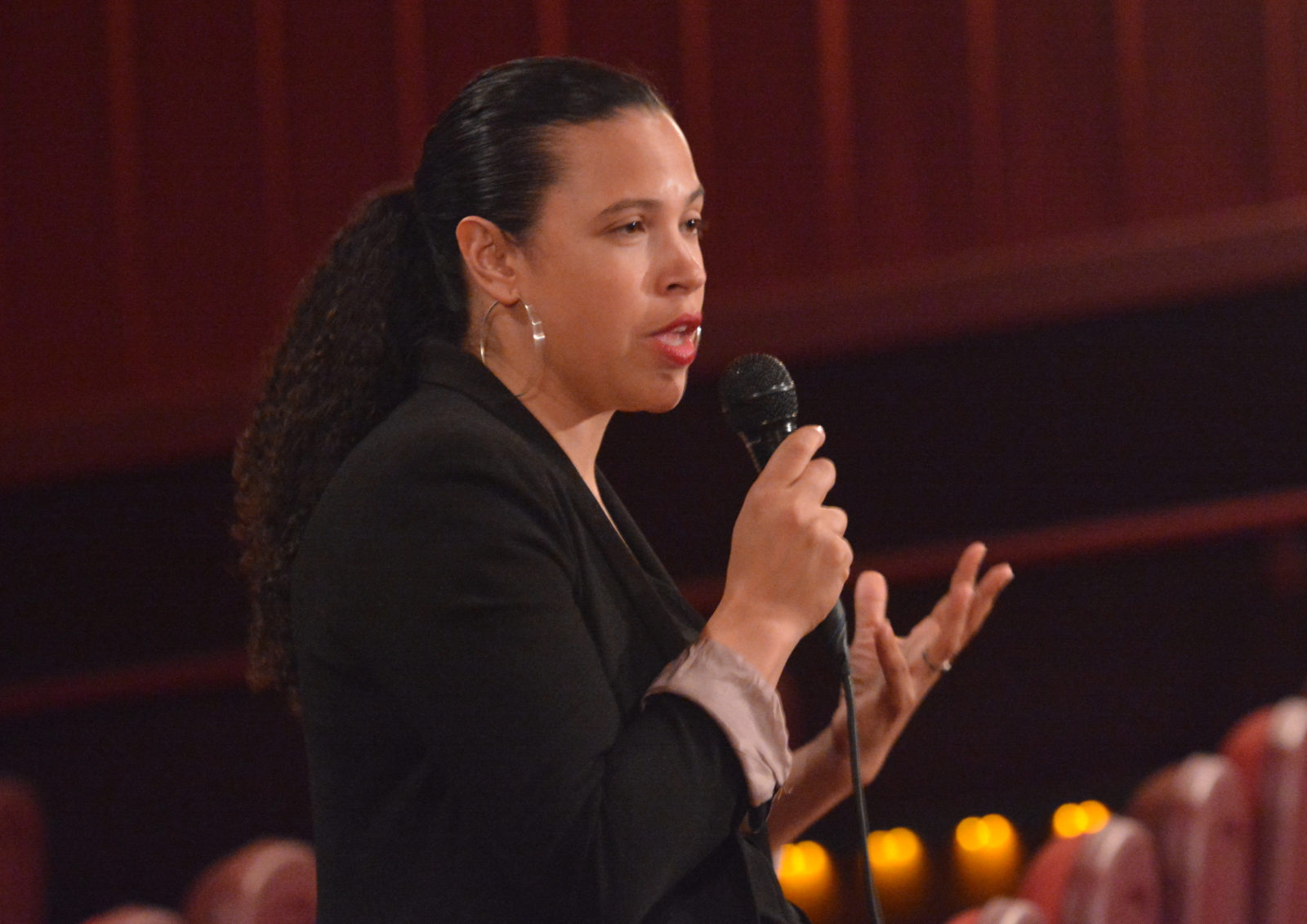 A Black Jewish filmmaker brings her dual identities to BET

Lacey Schwartz Delgado believes conversation — the tougher the better — can bring about change. Her own story proves it.

She had several hard conversations with her parents after learning, at age 18, that her biological father was not the Ashkenazi Jewish man who raised her but actually a Black man with whom her mother had an affair. It had been explained to her throughout childhood that she was simply dark-skinned, a trait she was falsely told she inherited from her Sicilian Jewish grandfather. She chronicled the journey of racial self-discovery that followed this revelation in her acclaimed 2014 documentary “Little White Lie.”

Now, Schwartz Delgado has teamed up with BET TV to bring a difficult but important conversation to BET’s viewers. She directed “Black x Jewish,” a 30-minute TV special that premieres tonight on BET and explores the intersection of antisemitism and racism, along with the decades-long relationship between Black and Jewish communities to confront hate.

“It was really exciting and interesting to think through how to have that conversation in that space for that audience,” Schwartz Delgado told Jewish Insider. “Obviously, there are people of all different backgrounds who are going to be tuning into BET — but it was really created for a Black audience.”

The special will be available online to stream tomorrow. It is the latest project from BET’s “Content for Change” program, a $25 million initiative announced last summer to target racial inequality in America.

“Black x Jewish” starts with an exploration of the contrasts of January 6: The night before, Georgia elected its first Black and first Jewish senators; several hours later, white supremacist rioters invaded the U.S. Capitol. “I think that framework really sums that up the highs and lows. The high is when these communities come together and can achieve incredible things, and then the lows are when the hatred against both communities collectively comes out,” said Schwartz Delgado.

The special features a diverse array of activists, faith leaders and artists — some are Black and not Jewish; others are Jewish but not Black; several, like Schwartz Delgado, are both. “It was less about us kind of trying to check all the boxes and more just to make sure that we were inspiring the beginning of a conversation,” she said.

“There is power in unity,” Schwartz Delgado notes in the special. It traces the history of the Black and Jewish communities working together during the civil rights movement, while also featuring in-depth discussions about the ways that antisemitism and racism intersect.

Rep. Hakeem Jeffries (D-NY), the chairman of the House Democratic Caucus, is the only politician to appear in the film, but that’s less about politics than it is the unique demographics of his Brooklyn district. “All roads lead to Brooklyn,” Jeffries jokes. Schwartz Delgado observes that he “successfully navigates a place where Black folks and Jewish people have both lived for generations,” and that Jeffries is “on a mission to see how Black and Jewish communities can look at their own experiences to find common ground and build alliances.” (Schwartz Delgado is married to Rep. Antonio Delgado [D-NY], who represents parts of the Hudson Valley and the Catskills.)

The special comes more than a year after last summer’s widespread racial justice protests, which led many Jewish institutions to commit to diversity and inclusion efforts, particularly when it comes to Jews of color in their communities. Schwartz Delgado is heartened by some of the progress she has seen but contends there is more work to be done. “I think it’s fair to say that the work is continuing. It’s not just a flash in the pan. The work is also very complicated,” she explained.

“If we flipped the conversation and actually start from a more personal space, what we’ll find is that when you take all of these families, you put them together, that makes communities. When you put all these communities together, that makes society,” noted Schwartz Delgado, and that’s when she believes societal change can happen.

Since her childhood, the conversation in the Jewish community — and the amount of education Jews are given about diversity in the community — has changed dramatically. “Many of us have grown up where being Jewish was synonymous with being white. We didn’t even talk about us being white. But it was… out in society synonymous with whiteness,” she noted.

“There’s a lot of conversations about the Black American community and the Jewish American community, and it’s almost like we forget that there are many of us who are living with both of that,” Schwartz Delgado pointed out. “We’re talking about how those two communities integrate, well, how do we internally integrate those identities [within the Jewish community]?”

For Schwartz Delgado, it took having difficult conversations with her family to come to terms with her story and be able to create art about the huge questions surrounding her identity. She is still a practicing Jew, raising her twin boys Jewish in an interfaith household. “I think I’m very similar to a lot of other young Jewish families who are just trying to figure it out, the same thing of, how do I reconcile where I came from with what I connect to individually?”

Seven years after the release of “Little White Lie,” “we still hear from people on a daily basis who connect deeply to the story,” she observed. That includes Jews of color like her, but it includes many more people who are simply grappling with their identity or who relate to the coming-of-age story in the film.

“When we had the film come out, we really were very intentional about making sure that we wanted it to be in as many different spaces as possible,” she recalled. “This is a perfect example, actually, of this show, like — I’m currently talking to [Jewish Insider], a Jewish publication, about a show that’s going to be on BET. I love that. That’s very exciting to me to make sure that we’re crossing boundaries.”