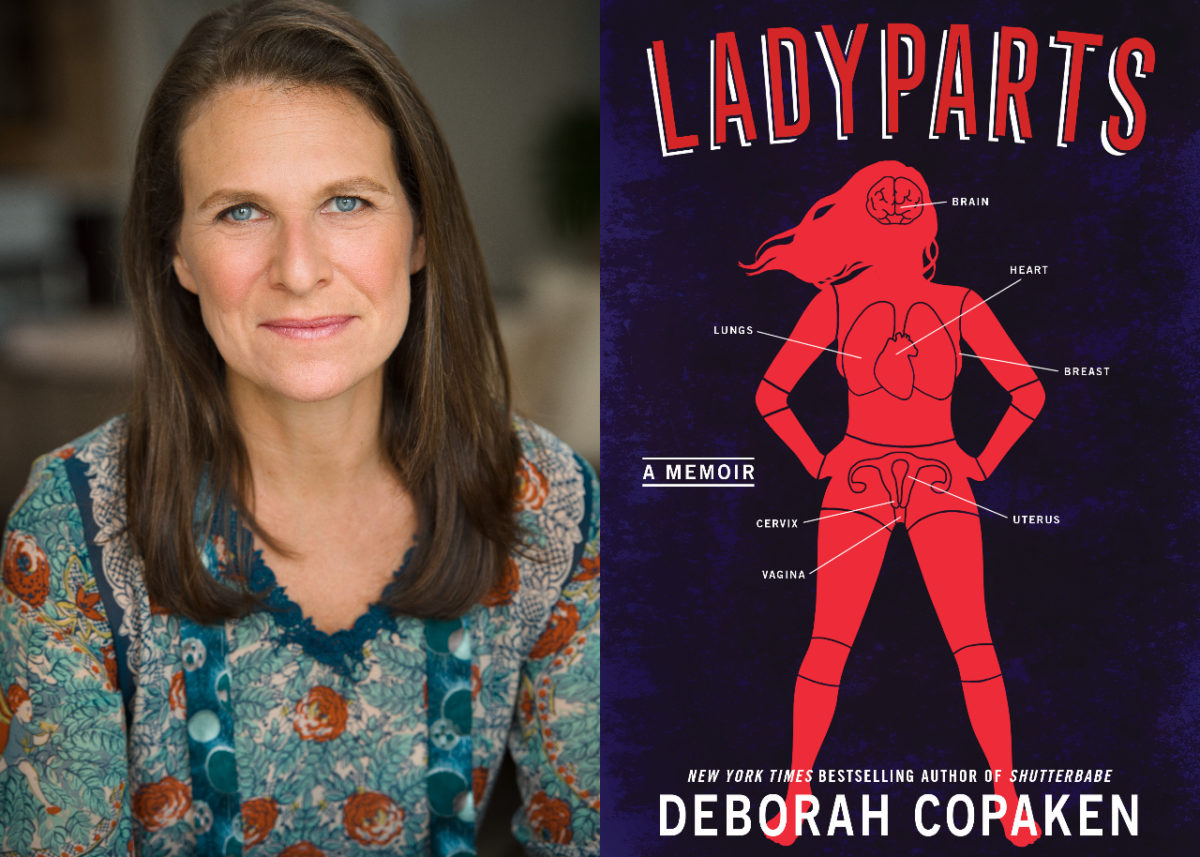 Nothing was off limits for Ephron, the beloved Jewish writer and filmmaker. She wrote about the parts of herself she didn’t like, those she did, and embarrassing encounters with all of them.

It’s this mindset that guided Deborah Copaken in her new memoir, Ladyparts, which comes out next week.

“What Nora teaches through her writings and through her films are ways to manage that [and] ways to reframe what’s happening to you in order to move forward with a smile and be able to manage tragedy poignantly, for lack of a better word,” Copaken told Jewish Insider in a recent interview. Ephron reached out to Copaken following the release of Copaken’s first book, Shutterbabe: Adventures in Love and War, about her time as a war photographer, and the two began a friendship that continued until Ephron’s death in 2012.

Ladyparts takes readers through the series of maladies and injuries Copaken experienced as she reached middle age, with each illness standing in as a metaphor for some larger theme in her life. Heart palpitations as she finally opened her heart, post-divorce. A hysterectomy right as Ephron, a surrogate mother, died, and right as Copaken’s daughter first got her period. Removal of her precancerous cervix just when she was looking for romance.

“The scars covering my female body, in other words, felt like the vague outline of a story begging to be fleshed out, body part by body part,” Copaken writes. The scars provide the outline, but the book dives deep into some of the most personal aspects of her life — her divorce, the debt her ex-husband left in her name, the reality of living paycheck-to-paycheck with no health insurance.

She doesn’t shy away from getting political — when she has to take an Uber Pool to the hospital during a medical emergency because she can’t afford an ambulance, she bemoans the poor care and massive costs of the COBRA insurance system for people who have recently lost their jobs — but the book is not a political manifesto.

“It became very popular about 10 years ago — there were a lot of recipes online, where you hide the vegetables in your kid’s food by, like, grinding them up and putting them in the pasta…so they would get their vegetables,” she explained. “That’s how I see my writing: I sort of grind up the policy issues into humor and storytelling. But hopefully, because it’s entertaining enough, people pay attention.”

She details horrific scenes with bursts of humor, like the time she woke her daughter — jet-lagged and recently home from Birthright Israel — when Copaken was hemorrhaging large blood clots.

“When the 18th clot emerged from my body, we were counting them, my daughter and I, and I joke, ‘Oh, it’s a chai, right?’” she recalled, referring to the Hebrew word for life, signified by the number 18.

Copaken’s Jewishness percolates throughout the book almost by accident. When she was asked recently to write a blog post about how her faith has influenced her writing, she balked — she thought, at first, that it hadn’t. “Originally I was like, ‘I don’t know if I can write anything about that.’ And then I re-read my book, and I thought, ‘Oh, my god, there’s so much Judaism here,’” she said.

“I’m not a religious Jew,” Copaken writes. “I’m more of a bagel Jew.” And yet Judaism has been a major force in her life. Growing up outside of Washington, D.C., Copaken had a bat mitzvah, and then did bar mitzvah tutoring to make extra money in high school.

“You can take the Jew out of the shtetl, but you can’t take the shtetl out of the Jew,” Copaken remarked. “I am my grandparents’ grandchild.” Before escaping pogroms in Europe, her grandfather had been tossed from his crib by Cossacks, leaving him with an injured arm for the rest of his life.

“To grow up Jewish is to grow up knowing relatives of yours and people in your circle who know people who’ve been killed in the Holocaust — people who have been abused and discriminated against, and that you can’t separate out your Jewish identity from the history of Judaism,” Copaken explained. “It seeps into everything.”

In Copaken’s first job after college, she worked as a war photographer in the late 1980s and early 1990s. One of her postings was in Ramallah, in the West Bank, where she covered the First Intifada. It was her first time in Israel.

“As a Jew traveling to Israel for the first time as a journalist, it was definitely an interesting way and an eye-opening way of seeing the country,” she said. “I was arrested, my first week I was there, by Israeli forces, the IDF.” She and her colleague were held until they would not be able to get their film in on time, and then the film was removed from the cameras and exposed to the light so they couldn’t get the photos developed, a move she described as “censorship.”

The experience — including spending a week with a Palestinian family under lockdown orders from the Israeli army — showed her how complicated the conflict is, and the experience did not leave her feeling hopeful.

Copaken left war photography when she wanted to have children. “I got really tired really quickly of the danger,” she recalled. “A friend of mine from my college, who also took photography [classes] with me, was killed in Iraq. That was kind of a watershed moment where I was like, ‘Oh, yeah, this is serious.’ You feel invincible as a 22-year-old.”

She returned to the U.S. and entered broadcast journalism. But by the time she got pregnant, she was working long days, and her company had no paid maternity leave policy. She asked her boss if she could work four days a week, and he said yes; but when the matter moved to his supervisor, it was rejected. “He kicked it up to the vice president at NBC to give their final approval. She had kids and had this big job, and she thought, ‘If I did it, you should be able to do it,’” Copaken said. The request was denied. So Copaken left TV, and found her way into the writing world.

As a contributing writer at The Atlantic, Copaken has written often about experiences unique to her, as a woman, that also intersect with big public conversations. She wrote in 2018, amid a slew of anti-abortion bills introduced in state legislatures around the country, about her own experience of abortion — she’s had two, and also has three children. A story from earlier this year detailed the sexual harassment she endured from Ken Kurson, the former editor of the New York Observer, who was pardoned by former President Donald Trump earlier this year after Kurson was charged with cyberstalking and harassment.

She brings her style back to Ephron, her mentor: “In talking about her own personal comedy, stories, tragedies, all of that, she’s able to allow us to see a universal picture of womanhood in America,” said Copaken.

And for Copaken, the personal stories get specific, and graphic. She writes about “vaginal cuff dehiscence,” a dangerous complication that followed her hysterectomy and nearly killed her, but which she had never heard of until it happened to her. This, she argues, is what happens when you’re a woman.

“What is the risk of this? How come I didn’t know what the risk was? How come nobody told me that this could happen to me? It’s a huge, big deal. My 20-year-old daughter just saved my life,” she said. When she turned to Google to assess the risk of the condition, the answers ranged from 0.001% of hysterectomies to 7%, a vast chasm due to poor record-keeping. “They don’t have a registry. That would require money, and nobody’s putting money into anything female health-related,” she noted.

After she left the hospital, a friend who’s a gynecologist told her to stay off her feet, not do any heavy lifting, have people help her. “But I was alone at the time. I didn’t have a partner. My marriage had broken up. My kids were away for the summer. It was just — it was not easy,” she recalled.

In Ladyparts, Copaken inserts humor into all of these stories, but she is detailing a reality that millions of Americans understand all too well: What do you do if you need help but you can’t afford it, and you have no one to help you?

The book presents a detailed picture of Copaken’s finances: $3,000 in her bank account. $2,314 in monthly COBRA fees. Renting out her son’s bedroom when the rent on the apartment rises from $3,500 to $5,000. Deciding whether to pay for the $6,000 MRI to make sure a breast lump is gone. Numbers that many Americans have memorized, and others don’t think twice about.

Writing the book was a way for Copaken to counteract the stigma around money, particularly for people who look like they have it but do not. “I’m not gonna say, ‘I don’t have money,’ because it’s shameful. You’ve had all these advantages, you’ve gone to good schools, why don’t you have money? Well, I don’t have money because I can’t afford my life,” she explained. “That’s partially why I was just so brutally honest about my economic situation, because I cannot be the only one going through this.”

And the way Copaken knew she could make a political point was following Ephron’s example.

“What I kept thinking as I was writing Ladyparts,” she noted, is that “your body’s not yours anymore… You’re giving the public your body as a megaphone for everything that can and does go wrong in women’s lives, from childcare, snack foods, to health care absurdities to lack of data and bad medical advice that lead to serious complications and near death. Use what has happened to you for the greater good.”