New bill would mandate a report by the State Department to determine Lebanese government implementation of U.N. Security Council resolution 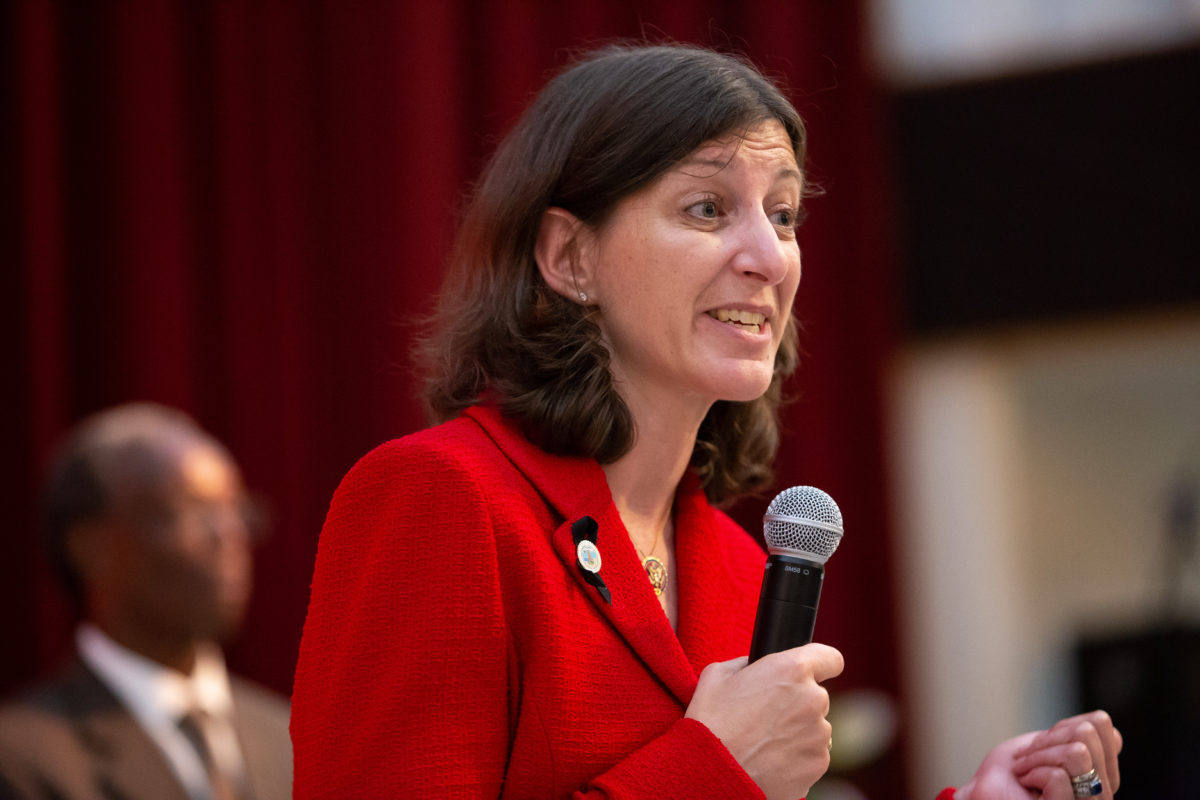 Parker Michels-Boyce for The Washington Post via Getty Images

Rep. Elaine Luria answers questions on a variety of topics during a town hall at New Hope Baptist Church in Virginia Beach, VA, on Thursday, October 3, 2019.

In a renewed effort to blunt Hezbollah’s influence in Lebanon, Reps. Elaine Luria (D-VA) and Lee Zeldin (R-NY) are set to introduce a bill today that pushes the State Department to exert new pressure to enforce a U.N. Security Council resolution mandating the disarmament of the terrorist group.

The legislation mandates a report from the State Department on the extent of Hezbollah’s influence on the Lebanese government and military, the state of the Lebanese military’s actions to implement the UNSCR resolution, the impacts of U.S. security aid to Lebanon and the threats Lebanon faces from Syria.

The bill also requires the State Department to submit a strategy for dealing more broadly with Lebanon, including increasing the implementation of the UNSCR resolution, which was passed in 2006 in an effort to end that summer’s war between Israel and Lebanon, and extending Lebanese governmental control over South Lebanon, an area with significant Hezbollah-linked activity.

“This is more important than ever to make sure that we hold Lebanon accountable for allowing Hezbollah’s influence and the threat against Israel,” Luria told Jewish Insider on Monday. She added that she sees the bill as an important step to counter Iran, for which Hezbollah is a proxy, and its threat to Israel and the United States.

“It’s important to show that there’s bipartisan support in the Congress for helping protect Israel as our strongest ally in the Middle East,” Luria said. “Obviously there’s been a lot of churn around that lately. And I think this is just another way to reiterate that support for Israel remains strong.”

Zeldin also framed the legislation as a move to support Israel.

“Like Hamas, Hezbollah is an Iranian proxy that is an imminent and constant threat to our greatest ally in the region, Israel. The United States cannot sit idly by as Hezbollah continues to exert influence within the Lebanese Armed Forces and amass military resources as it seeks to destroy Israel,” he said in a statement to JI. “We must make it clear to our allies and adversaries in the Middle East and throughout the world that the U.S. stands shoulder to shoulder with Israel and considers its safety a top international priority.”

The New York Republican, who represents Suffolk County, introduced another bill last week with similar goals, which requires a report from the White House on Lebanese military leaders’ connections to Hezbollah. That legislation includes a provision stripping 20% of U.S. security aid from Lebanon until the White House certifies that the Lebanese Armed Forces are cracking down on such leaders, that the military is making a “serious commitment” to fulfill the UNSCR resolution and that the Lebanese military has not coordinated in any way with Hezbollah in the past year.

Luria cosponsored this bill with Zeldin in 2019, but the House Foreign Affairs Committee rejected the aid-conditioning provision during its markup of the bill. It failed to be brought to a full floor vote before the end of that session. The bill’s companion legislation in the Senate, introduced by Sen. Ted Cruz (R-TX), likewise did not receive a floor vote. This Congress, the bill only has Republican cosponsors.

Luria called her latest bill — which resembles the 2019 bill after it underwent revisions in the House Foreign Affairs Committee — a “continuation” of the failed bill from the previous Congress.

“The thought was that the purpose of the bill was important, but that rather than conditioning a certain amount of aid to Lebanon based off of this, that the reporting requirements to the secretary of state would be a sufficient signal to make sure that Lebanon understood that we were monitoring their actions,” she said of the committee deliberations.

“When there are forces that present a clear and immediate threat to U.S. forces in the region, a strike to prevent them from harming U.S. forces is merited,” Luria said. “The president has stated that there was a clear danger to U.S. forces based off of these facilities that house these drones. As required by the War Powers Act, he’ll be making a report to Congress to provide that detailed information.”

She pushed back against early Democratic skepticism regarding the strike, including comments from Sen. Chris Murphy (D-CT) speculating that the Biden administration may be overstepping its legal authority and may need a congressional declaration of war to continue its campaign against Iranian proxy groups.

“I think the president is fully acting within authority based off of a credible threat and intelligence and preventing harm to U.S. troops,” she said. “I think that something like an AUMF [Authorization of Use of Military Force] would also be provocatory in a way that I think is not necessarily beneficial at this point.”

Sen. Bob Menendez (D-NJ), who chairs the Senate Foreign Relations Committee, said in a statement that the committee plans to further examine the Biden administration’s legal rationale for the strikes.