Erdan: Ground operation in Gaza was alternative to strike that hit AP offices

Silicon Valley speaks out against antisemitism

Rookie doctors in the COVID ward push through the grief 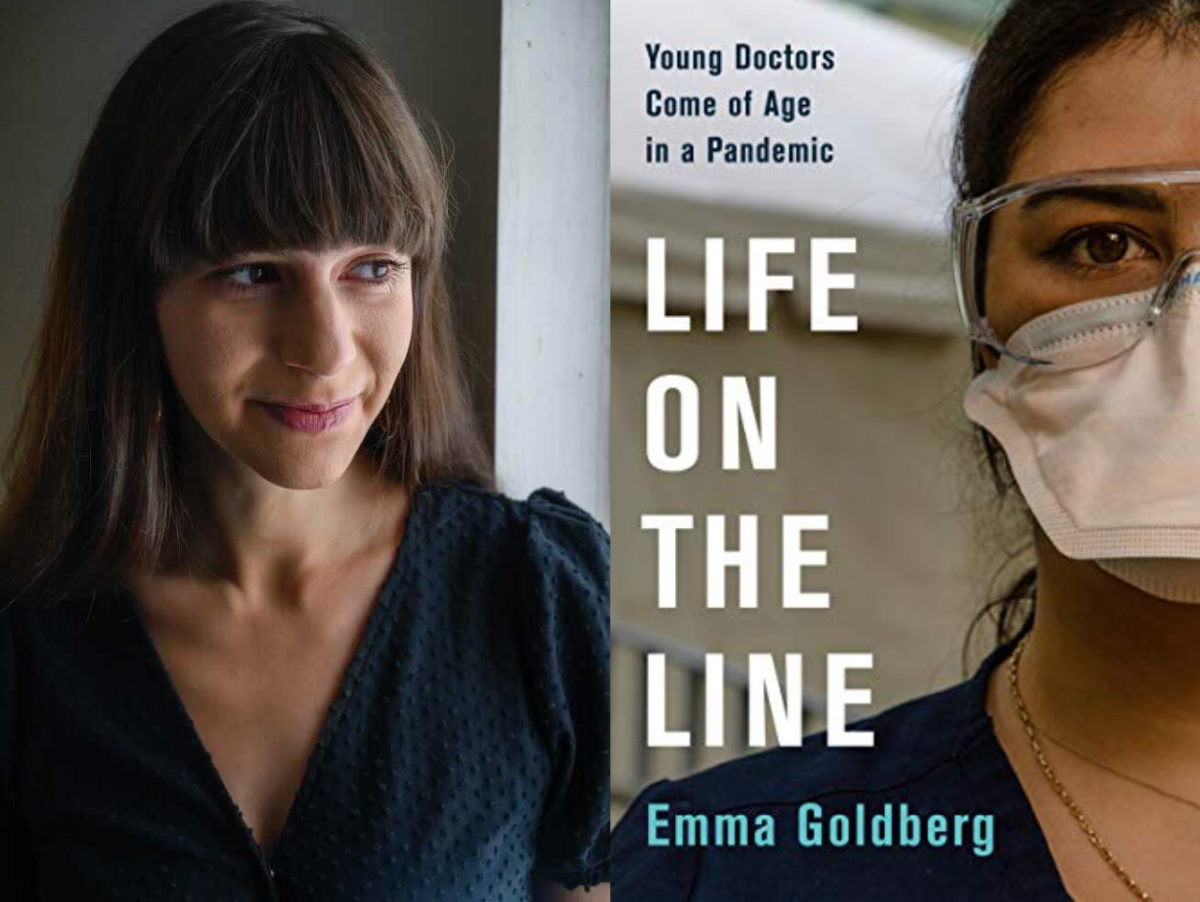 Even before the COVID-19 pandemic, doctors held an esteemed position in American society. Factor in a global pandemic, and suddenly virologists, public health experts and medical doctors of all stripes have become media sensations. When seeking advice on pandemic precautions over the last 15 months, Americans needed only to turn on cable news to find dozens of doctors on primetime. In Washington, “We love you Dr. Fauci” signs — referring to Dr. Anthony Fauci, one of the country’s top infectious disease specialists — can still be spotted in some residents’ yards.

At the same time that a handful of seasoned doctors were gaining newfound respect and public acknowledgment, a new crop of young doctors entered the field for the first time. Some New York City medical schools graduated fourth-year students a few months early to allow them to provide much-needed support for hospitals and COVID wards as the city struggled through a catastrophic coronavirus surge last spring.

A new book from New York Times reporter Emma Goldberg documents these neophyte doctors’ experiences entering the medical field at a time when they were most needed, and most in danger. But Life on the Line: Young Doctors Come of Age in a Pandemic, in stores today, is not just a chronicle of how six doctors adapted and served New Yorkers in a once-in-a-lifetime pandemic. Goldberg’s book also explores how these doctors sought to draw on their own experiences to bring quality medical care to patients from underserved communities.

“There’s so much incredible, incredible coverage of medical research and scientific breakthroughs,” Goldberg told Jewish Insider in a recent interview. “There’s not as much coverage and stories about the day-to-day lives of doctors and the cultural forces that affect who gets represented in the field and what working conditions are like for doctors.”

Goldberg, 26, does not need to convince readers that doctors are important. But why should readers care about the working conditions of the members of such an exclusive, highly paid profession? “They are normal people with an outsize impact on whether we live or die,” Goldberg argues in the book’s introduction.

The six doctors in the book “represent the new face of American medicine,” Goldberg writes. They seek to interact with patients in new ways and take seriously the concerns of marginalized populations that have not always received quality medical care. COVID-19 illustrated this fact in dramatic ways: Data from the U.S. Centers for Disease Control and Prevention show that Black Americans, Latino Americans, and Native Americans have double the risk of white Americans when it comes to the possibility of dying from COVID-19. These six doctors “know the fear that white coats and sterile white halls can so easily provoke. They are intent on remaking the field in their image,” writes Goldberg.

Last spring, during the first wave of the pandemic, Goldberg was in regular contact with six doctors as they began their careers and tended to the sickest patients. “Whenever they were free to talk, I would just drop everything and talk with them,” she recalled.

The doctors she chose to feature represent different societies and cultures: among them are a first-generation American whose parents practice traditional Chinese medicine; a Hispanic woman whose parents did not go to college; a gay man who recalled the AIDS epidemic as he fought this new virus; and a woman who had to deal with a serious illness in her own family while treating COVID patients. They were dispatched to hospitals including Bellevue Hospital in Kips Bay, Montefiore Medical Center in the Bronx, and NYU Langone’s Tisch Hospital on the East Side. Goldberg delves into the personal lives of each of the six doctors, having decided early on that the book would not only be a historical account of the first wave of COVID and its sickest patients.

“The grief would be so heavy that I felt like it wasn’t fair not to allow the reader to also connect with them as these just brilliant, bright, hopeful people that they are,” Goldberg explained. “I thought people would just be so saturated with stories of loss and grief during COVID that, like, how could they make it through a whole book without feeling really personally connected to the doctors at its center?”

Presenting doctors and medical students through a personal, humanized lens has characterized Goldberg’s approach to medical reporting, which has been a major focus of her work since she joined the Times two years ago as a researcher and fact-checker on the opinion desk. “In medicine, there can be these power dynamics where doctors are seen as just these cold figures of authority and expertise, and not as totally average people who you can relate to,” Goldberg noted. “That’s another goal with any medical reporting I do. I want to show how human the medical field is and what drives doctors to do the work that they do.”

Life on the Line features a historical accounting of past pandemics and makes the argument that understanding how doctors treated patients in previous crises offers insight into the early, chaotic days of the COVID-19 pandemic.

“One of the things that really did interest me in doing this research was learning all of the ways in which epidemics can bring out a deeper layer of xenophobia, when actually public health crises should show us all the ways that people are bound up together, and the ways in which one person’s health is dependent on the health of their neighbor or their larger community,” Goldberg argued.

Since the pandemic began last year, Asian Americans have reported an increase in violent hate crimes and discrimination. A March 2021 report from Stop AAPI (Asian American Pacific Islander) Hate found that nearly a quarter of anti-Chinese incidents reported to the organization scapegoated China, where the virus originated, for the pandemic. Goldberg pointed to the so-called “Spanish Flu” in 1918 as a precedent: “It was painted as this foreign thing that came in and just affected and beat down the U.S., and just fed into these narratives of isolationism” that were popular at the time, she explained.

In addition to the Asian Americans who began to face this new wave of bias, other vulnerable communities began to bear the brunt of the pandemic’s toll. “I think that story became apparent early on in the pandemic, that the people who were being hardest hit were the people who couldn’t self-isolate, the people who were working frontline jobs, and those were also the people who were getting the lowest quality care,” Goldberg observed. “Inequality doubles down on itself, and I just knew that if I was going to tell any story about COVID, it had to put inequity at the center of it, because otherwise it wasn’t going to be an honest story.”

This pandemic is not the first time underrepresented and underserved communities have had to contend with poor health outcomes and a lack of investment from hospitals and government institutions. “I think that that is really the story of our medical system, that when a disease or a virus or a condition is afflicting the most vulnerable people, it’s going to get the least investment of resources,” Goldberg argued. During the AIDS epidemic in the 1980s, “there were so many patients who were neglected precisely because they were coming from the country’s most marginalized populations, particularly the gay community, but a lot of other marginalized communities as well, like low-income Americans [and] Black Americans,” Goldberg noted. “People were being ravaged by that crisis.”

Goldberg includes two doctors whose connection to Judaism is a key part of their identity. One of those doctors is Sam (Goldberg does not use their last names), whose decision to serve on the frontlines of the COVID pandemic was inspired by the AIDS crisis; he met his boyfriend Jeremy at the New York City AIDS march, which both had attended with their queer synagogue, Beit Simchat Torah. Goldberg writes about how Sam first began to explore and understand his sexuality at a Jewish overnight camp, where he struggled with a hookup culture that seemed to prioritize heterosexual relationships. Sam and Jeremy’s parents were supposed to meet at a Shabbat dinner last March to celebrate Sam learning where he would serve out his residency, but the festivities were canceled with the onset of the pandemic.

Goldberg also told the story of Elana, an observant Jew and Yeshiva University graduate who frequently consults Jewish tradition when making medical decisions. Goldberg recounted the prayer Elana recited the first time she dealt with human cadavers and the teachings she had learned about the sanctity of human life. Early in the pandemic, when she was working in COVID units, she had to decide whether to work on Shabbat if a call came in late Friday or during the day on Saturday. Her father reminded her of the principle of pikuach nefesh, which “meant that saving a life trumped any other religious commandment, including the rules of Shabbat,” Goldberg writes.

For Goldberg, who got her start in journalism at the student newspaper at the Abraham Joshua Heschel School in New York, including these stories was an easy choice. “It’s so natural — as a writer [and] reporter, you bond with people who you have shared experiences with,” she said. “It’s probably very natural that I ended up following these two Jewish doctors and that we found so many personal things to connect over, because, of course, they brought things out that I was like, ‘Wait, I’ve had that experience.’”

At Heschel, her stories focused on topics like kosher food production and how her school’s Orthodox minyan confronted feminism. “Probably no one read it but my mom,” she joked. Years before, as a fourth grader, she wrote about a pro-choice protest — and earned an early lesson in the importance of using precise medical language. “I was trying to explain to my fellow fourth graders what abortion was,” Goldberg recalled, but the language she used to describe the medical procedure led to a call from the school to her parents to “rein her in,” as she put it.

Goldberg always considered herself a writer, beginning with the journals she filled from a young age. Her father, J.J. Goldberg, was the editor-in-chief of the Jewish Daily Forward in the early 2000s. But growing up in media circles through the 2008 recession — and the mass restructuring and downsizing of the media industry that followed — led her to question whether journalism was really worth pursuing.

Writing this book reminded Goldberg why she decided to give journalism a try. “These are stories about being courageous, and service-minded and inspiring people,” said Goldberg. She doesn’t hide that she cares about them; the book is not shy about its praise for these young people who acted bravely at the height of the pandemic. “I know you’re not supposed to write journalism for the subjects, but it was very much important to me that it was something they were comfortable with and felt that it was the type of story that they were ultimately happy to share,” Goldberg observed. “I love the people in this book. I think that they’re incredible people.”