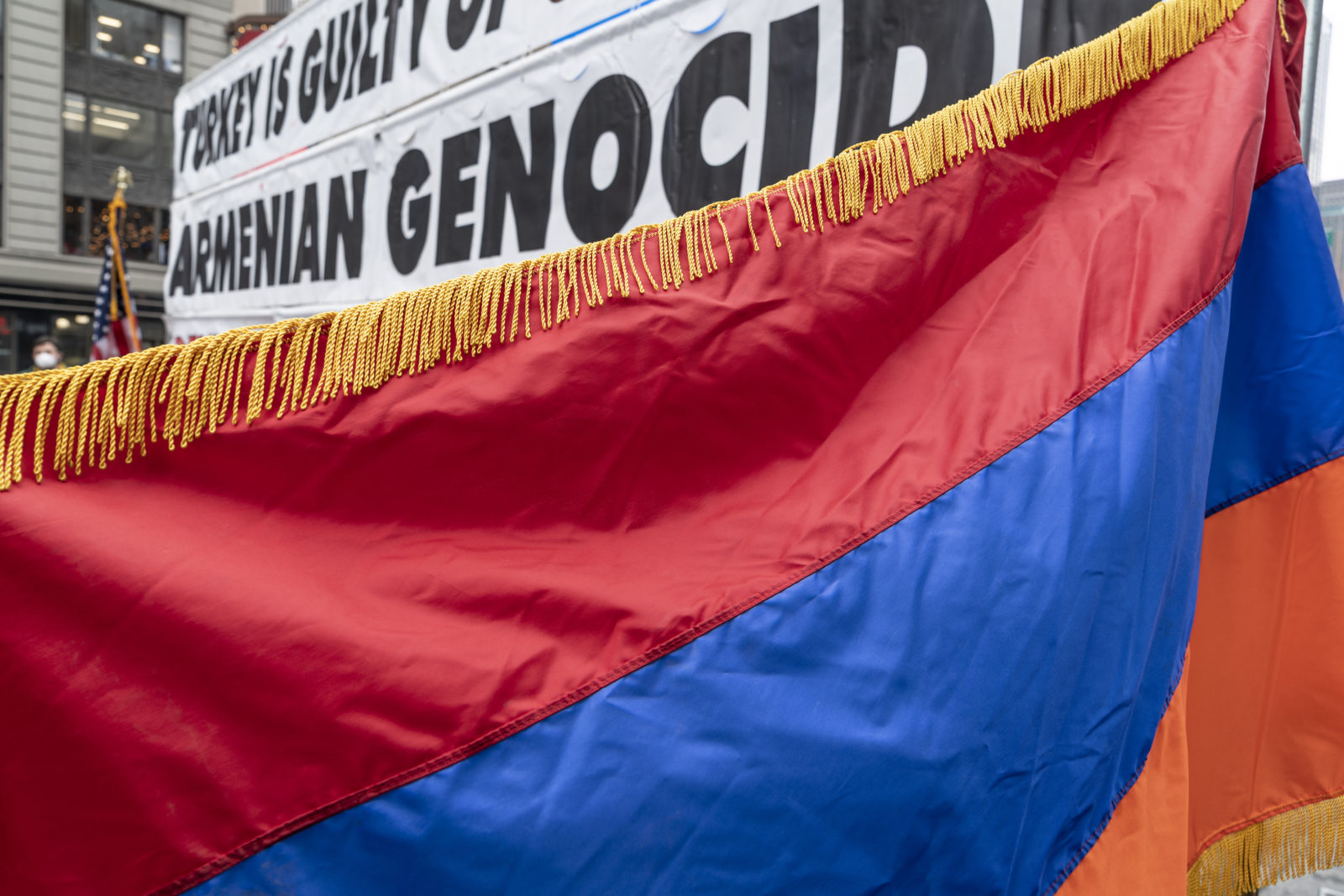 For decades, Jewish groups outside of California largely avoided weighing in, with Turkey urging Israel and its supporters to stay out of the debate

On Saturday, in a statement marking the mass murder of Armenian Christians in Ottoman Turkey, President Joe Biden became the first U.S. president to refer to the atrocity as a “genocide,” a symbolic move that nevertheless marks a major shift in U.S. policy. The move was lauded by portions of the Jewish community.

More than a century after the Ottomans murdered between 650,000 and 1.2 million Armenian Christians, the question of whether to use the word “genocide” to describe the atrocity has morphed into a global geopolitical controversy, with Turkey exerting its muscle to urge countries like the U.S. and Israel to avoid using the term. Biden’s declaration marked the end of a years-long effort by activists to push the federal government to use the word.

The push for congressional recognition of the Armenian genocide, which culminated in a near-unanimous 2019 resolution recognizing the genocide, was led by Rep. Adam Schiff (D-CA), a Jewish member of Congress whose L.A.-area district includes a sizable Armenian population. “The word ‘genocide’ is significant because genocide is not a problem of the past — it is a problem of today,” Schiff told JI. “By speaking the truth about this horrific period of history, refusing to be silent, and calling it a genocide, we can ensure that the United States is never again complicit.”

The announcement was met with resounding praise from a number of Republicans as well — conservative commentator Ben Shapiro credited Biden and called the move “long overdue.”

Turkey has long claimed that both Armenians and Turks were killed at the time as part of the devastation of World War I, rather than any concerted ethnic cleansing by the Ottomans.

The issue remains a source of controversy. Although Turkey and Israel no longer enjoy particularly close relations, for many years Turkey was Israel’s closest Muslim ally, leading the Jewish state to refrain from referring to the massacre as genocide. A statement Israel’s Foreign Ministry released on Saturday mentioned the “terrible suffering and tragedy of the Armenian people” without using the term genocide.

In 2007, the Anti-Defamation League urged members of Congress to vote against a resolution recognizing the genocide. (Similar legislation passed for the first time in 2019.) Abe Foxman, the longtime former national director of the ADL, said at the time that “Israel’s relationship with Turkey is the second most important, after its relationship with the United States. All this in a world that isolates Israel, and all this can’t simply be waved away.” Seven years later, in 2014, Foxman updated his position and referred to the massacre as genocide in a speech. By that point, Israel’s relationship with Turkey soured, after the Israeli military raided a Turkish flotilla that intended to break Israel’s blockade of Gaza.

More recently, as Armenia and Azerbaijan have clashed over the territory Nagorno-Karabakh, Turkey has come to the defense of Azerbaijan, a fellow Muslim nation. The Azerbaijani Ministry of Foreign Affairs announced it was backing Turkey following Biden’s declaration. Israel and Azerbaijan have cooperated in recent years, and Armenia recalled its ambassador from Tel Aviv after Israel went through with an arms sale to Azerbaijan in October 2020. 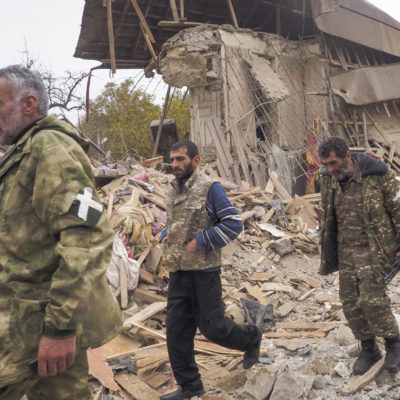 Some Jewish organizations lauded Biden’s declaration. “We believe that remembrance of any genocide is imperative to preventing future tragedies, and that process begins with recognition,” Jonathan Greenblatt, the current CEO of the ADL, told JI.

“Bravo to President Biden for being the first American leader to stand up to Turkey and say what was needed,” David Harris, CEO of the American Jewish Committee, told JI. “AJC cannot sit idly by and allow that outrageous denial to take root. And next, by the way, it could be about the Holocaust.”

Mark Weitzman, the director of government affairs at the Simon Wiesenthal Center, was one of 126 prominent Holocaust scholars who signed a statement two decades ago calling for official recognition of the genocide. He told JI, “President Biden’s statement not only affirms historical truth but represents a moral commitment to the repudiation of political support for genocide denial. It honors the memory of the victims by not distorting their fate and allows for the honest assessment of responsibility.”

JI did not receive responses from the Jewish Federations of North America and the Conference of Presidents of Major Jewish Organizations, two prominent national Jewish organizations, seeking comment on whether they now support such a declaration.

In California, home to the country’s largest Armenian population, local Jewish organizations were some of the first Jewish groups in the nation to publicly refer to the massacre in Armenia as a genocide.

“Nearly all nations have been victimized during the course of history. Yet being singled out for genocide is a horror that, fortunately, has been visited upon very few peoples,” Ephraim Margolin, then the chairman of the San Francisco Jewish Community Relations Council, wrote in a 1990 letter to the Armenian bishop in San Francisco. “We applaud the efforts of the Armenian community to educate those in this country about ‘the forgotten genocide.’ Please convey to the leaders of the Armenian community our most sincere support for this measure.”

Speaking to JI the day before Biden’s announcement, Richard Hirschhaut, director of the AJC’s Los Angeles office, said that “if President Biden indeed invokes the term genocide in his remarks on Saturday, that step surely will be met by a chorus of relief, exaltation, tears of joy and an affirmation of the fundamental goodness of America as a beacon of hope to the world.”

“The relationship between the Armenian and Jewish communities in Los Angeles is strong [and] vibrant,” said Hirschhaut. “We worked very closely together, just especially in the last two years with the introduction of a model ethnic studies curriculum in California, and its initial exclusion of the Jewish experience [and] the Armenian experience among other ethnic and minority groups.”

Hirschhaut was referring to a years-long effort by activist groups in California to provide ethnic studies resources to the state’s education system. A coalition of Jewish organizations in the state worked to amend the curriculum after earlier drafts included material that was deemed by some to be antisemitic, while largely leaving out the experiences of Jewish Americans as well as an explanation of antisemitism. Armenians and some other ethnic minorities were also excluded from core sections of the curriculum.

“Certainly, the shared experience of genocide and trauma that our communities have been through is is a point for people to bond around,” California Assemblymember Jesse Gabriel, a Democrat who represents the San Fernando Valley, told JI. Gabriel, who serves as majority whip and chair of the California Legislative Jewish Caucus, said Biden’s announcement “will be warmly applauded by a lot of folks in the Jewish community in Los Angeles.”

When Armenians in California protested Azerbaijan’s actions in Nagorno-Karabakh last year, members of the Jewish community came out in support. “When Azerbaijan was bombing [the region] and Turkey was supplying military weapons and artillery, Jewish World Watch took the lead and reached out to a number of Jewish elected officials and leaders” to get them to rally in support of Armenia, said Serena Oberstein, executive director of the Los Angeles-based anti-genocide organization.

Historians have long declared that what occurred in Armenia between 1915 and 1916 was, in fact, a genocide. The U.S. Holocaust Memorial Museum writes that the mass murder of Armenians by the Ottomans “aimed to solidify Muslim Turkish dominance in the regions of central and eastern Anatolia by eliminating the sizeable Armenian presence there.”

“The Armenian genocide has been too long denied, diminished in importance or politicized,” Deborah Lipstadt, the Dorot professor of modern Jewish history and Holocaust studies at Emory University, told JI. “This is a step in rectifying that. It comes too late for those who experienced this horror, but it will be a bit of a balm to their children, grandchildren and other descendants.”

Historians acknowledge that the Armenian genocide served as a frame of reference for Raphael Lemkin, the Polish lawyer who coined the term genocide in the mid-1940s as a Jewish refugee living in Washington, D.C. He used the term in a book about the Nazis, but his definition was broad, referring to the “destruction of a nation or of an ethnic group.” Lemkin stated on many occasions that learning about the Ottoman Empire’s persecution of Armenians from 1915 to 1916 influenced his thinking on the topic.

“Historians have long recognized the atrocities against Armenians of 1915-1916 as a genocide, as did Raphael Lemkin,” said Jeffrey Veidlinger, the Joseph Brodsky collegiate professor of history and Judaic studies at the University of Michigan. “From a Jewish perspective, it provides a frame of reference for the Holocaust. We can better understand the Holocaust and the pogroms that preceded it when we contextualize them within the wider patterns of ethnic bloodshed that occurred as old empires collapsed and new nation-states emerged in their place.”