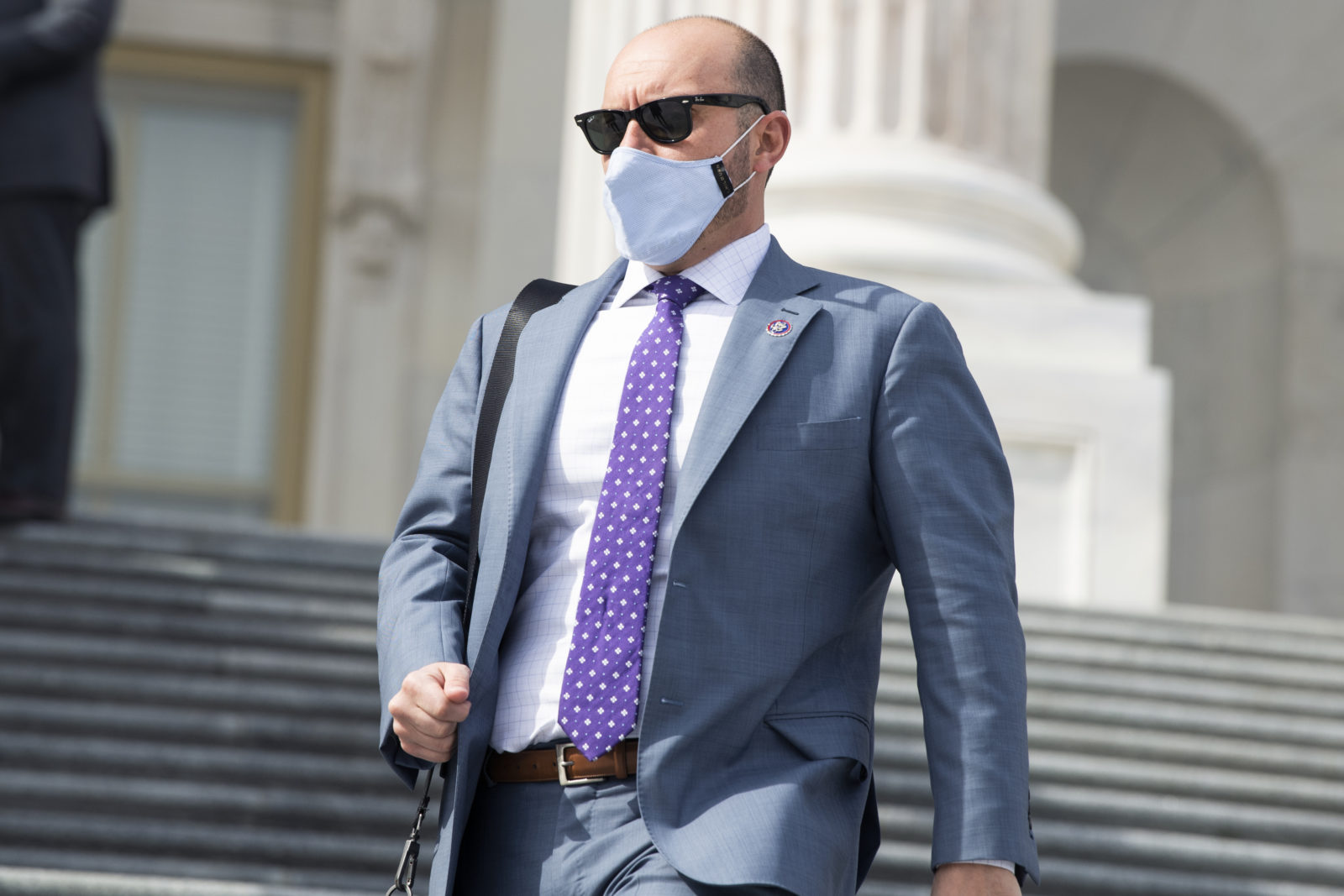 When former Rep. Peter King (R-NY) announced in November 2019 that he would retire at the end of his term, the 14-term congressman from Long Island confessed that his decision was driven in large part by what he described as a “toxic” political atmosphere in Washington.

His sentiment proved more prescient than perhaps he could have imagined as rioters stormed the Capitol building in an effort to overturn the election for former President Donald Trump just three days after King left office in early January.

King’s successor, Rep. Andrew Garbarino (R-NY), was locked in his office in the Longworth House Office Building for eight hours that day, watching with growing alarm as the protests devolved into a violent siege. “You couldn’t believe what you were seeing,” Garbarino, a 36-year-old former attorney, recalled in a recent interview with Jewish Insider.

But according to Garbarino, that tumultuous introduction to the Hill only strengthened his resolve to return that night to the House floor and certify the election results in favor of Joe Biden.

“The goal was to stop us and it didn’t,” he said. “Whether people were for objection or for certification, the fact that we went back in that night and finished our job, I think, with all the broken glass and everything, that was the best part about that day.”

The freshman congressman’s somewhat measured assessment of a deeply divisive moment in American politics — ultimately, 147 Republicans objected to the Electoral College count — underscores the tightrope moderate Republicans like Garbarino must navigate in a party still very much in thrall to Trump.

It also suggests a calculation tailored to the dynamics at play in Garbarino’s district, a traditionally conservative enclave including sections of Nassau and Suffolk Counties on Long Island’s South Shore that have been trending blue in recent years. Garbarino defeated his Democratic opponent, Jackie Gordon, by nearly seven percentage points in the general election, but victory by no means seemed a sure bet, with one influential forecaster having deemed the race a toss-up.

“During the campaign, I didn’t realize how terrible I was until I saw some of those commercials against me,” Garbarino quipped.

Defending the seat next cycle may prove even more vexing. “Garbarino’s district is likely to be competitive going forward,” said Craig Burnett, an associate professor in the department of political science at Hofstra University. “To be successful in that district, I think you have to be a moderate Long Island Republican.”

Garbarino — who touts his membership in the Problem Solvers Caucus and says he has already co-sponsored bills with a Democratic member of New York’s congressional delegation, Rep. Kathleen Rice — seems eager to present himself as one.

In conversation with JI, he emphasized his connections with a variety of lawmakers across the ideological spectrum, including Rep. Mondaire Jones (D-NY), the newly elected progressive congressman from Westchester. “I love Mondaire,” said Garbarino, adding that they met during freshman orientation and made plans to collaborate on restoring the state and local tax deduction, otherwise known as SALT, in New York. “We just hit it off.”

“He and I don’t agree on a lot of stuff, but it doesn’t stop us from trying to work together on stuff we do, and I think that’s what’s great,” Garbarino elaborated. “We’ll figure out what we can work together on and try to get it done, because getting something done is better than getting nothing done.”

Jones described Garbarino as a “friend” in a December interview with JI, but his office did not respond to a request for comment about the current status of their relationship.

“It seems like right now there’s such hatred on both sides,” Garbarino said. “‘If we don’t agree on this, we have to hate each other. You’re my enemy.’ Too many people feel that way now, and it’s not the case.”

Garbarino recalled the day of the Capitol attack, when his friend Rep. Lee Zeldin (R-NY), who presides over a deeply conservative district of Long Island, objected to the ballot certification in two contested states. Though they disagreed on that matter, “He gave up a lot of time to talk to me about my thoughts on the day,” Garbarino said of Zeldin, with whom he previously served in the New York State legislature. “He didn’t push any agenda.”

In a statement to JI, Zeldin described Garbarino as “a fighter for his constituents and a stalwart advocate for the issues most important to them.”

Zeldin, a four-term congressman and former state senator who recently announced his bid for New York governor, “knows both Washington and Albany,” according to Garbarino. “Lee is a very smart person and a very thoughtful person, and I don’t think he would be getting involved if he didn’t see a pathway to victory.”

Asked to assess the Democratic candidates competing in New York City’s crowded mayoral race, one of whom is likely to be the next mayor, Garbarino was more circumspect. “I don’t know how many of them are saying what they’re saying just to win the primary,” he said.

Still, he was willing to offer praise for at least one contender. “McGuire is interesting,” Garbarino mused, referring to Ray McGuire, the former Citigroup executive who has earned the support of a number of prominent business leaders in New York. “I think he understands that you need certain industries in New York to keep New York going.”

Garbarino grew up in the Long Island hamlet of Sayville and worked in his family’s law firm until deciding to pursue elected office. He served in the State Assembly from 2013 to 2020 before ascending to Congress.

As a new member of the House, Garbarino, who has vowed to tackle crime and security issues in his district, sits on the Homeland Security Committee, an assignment he regards as a particularly important one for his constituents. “They just arrested an MS-13 gang leader at the border the other day,” he said of the violent Salvadoran street gang. “We have MS-13 in my district.”

“It was awful what they did here,” Garbarino added. “The concern is now, with the border, with the crisis there, with people coming across, you don’t want MS-13 bringing more members from South and Central America up.”

Garbarino has a number of other geopolitical concerns in mind as he enters his first term, and he offered a mixed evaluation of President Joe Biden’s approach so far.

He approves, for instance, of Biden’s faith in international aid as a meaningful foreign policy tool. “A lot of Republicans tend to go against foreign aid,” Garbarino said. “I’m not, because we’re not playing in a vacuum here. If we don’t get involved, China and Russia are, and we need to compete with that.”

But he also believes there is room for improvement, arguing that Biden should increase funding for cybersecurity protections while expressing concern with the president’s effort to bring back the Iran nuclear deal. “I think we need to keep the pressure up,” he said. “I think sanctions work.”

Garbarino was optimistic that Biden would expand on the Trump administration’s push to establish diplomatic relations between Israel and several Arab nations including the United Arab Emirates and Bahrain. “I was just talking to somebody recently, it might have been an AIPAC call, but they were talking about, just between UAE and Israel now, the amount of travel and investment that’s happened since,” he said. “I hope it continues and more nations jump on.”

The first-term Republican said the Israelis and the Palestinians would have to work out their conflict among themselves if they have any hope of easing tensions. “Listen, I’m an attorney by trade,” Garbarino said. “Anytime an outside group tries to force a settlement on somebody, it doesn’t work.”

“The U.S. shouldn’t be forcing terms,” he added. “No country should be forcing terms. Israel and the Palestinians need to figure it out because, unless they both come to terms, it’s not going to work. You can’t force it, can’t force a settlement on one or the other. If somebody feels like they’ve gotten screwed, if they’ve been bullied into something, they’re going to be very, very upset, and it’s not going to work. It’ll fall apart. The deal always falls apart.”

But Garbarino seems to have more immediate concerns amid growing tensions in his own party, particularly as Trump sets his sights on the small number of House Republicans who voted in favor of impeaching him just before he left the White House.

Garbarino, who isn’t among that group of vulnerable incumbents, acknowledged that Trump “is going to have an effect on the party” going forward, but said the GOP was a “big tent” and could make room for a wide range of voices.

“I think he’ll be around for a while,” Garbarino said of the former president. “But he’s not the only leader left.”