This Israeli journalist argues in favor of a new globalization

In 'Revolt,' Nadav Eyal writes that the solution is a 'radical mainstream' preaching even more global cooperation 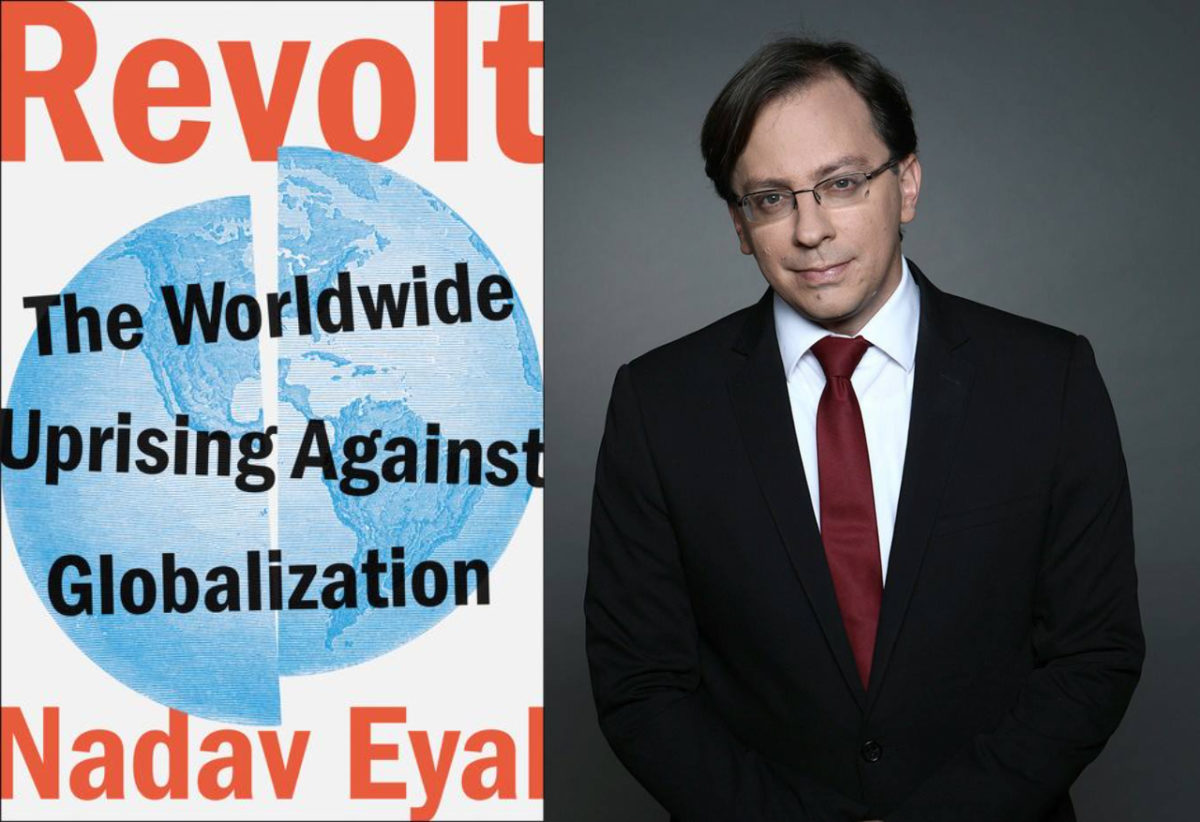 The Appalachian coal miner, a stand-in for the long-suffering white working class, looms large in American politics. Coal miners who lost their jobs as the U.S. moved away from using coal as a power source became a key target of Donald Trump’s “make America great again” mantra in 2016. News organizations reported on coal miners as a political class, with a typical CNN headline from a week before the 2016 election reading “Hillary Clinton might lose Ohio because she badmouthed coal.”

Now, an Israeli journalist suggests that the story of the American coal miner transcends electoral politics and is actually a powerful parable about our era of global turmoil. In Revolt: The Worldwide Uprising Against Globalization, Yediot Aharonot columnist and Channel 13 commentator Nadav Eyal argues that disillusioned coal miners in Pennsylvania are just one piece in a global puzzle of vulnerable people being crushed by globalization. The book, recently translated into English from its original Hebrew, argues that the solution is not nationalism — but a better, more cooperative globalization.

In a Zoom interview with Jewish Insider, Eyal explained why he believed he was so well-suited to predict Trump’s ascent before many American commentators and political insiders: an “outsider’s view,” he said. He leaned on that perspective in a Hebrew documentary about the former president’s rise that aired in Israel in June 2016, when his chance of winning the presidency still seemed like a longshot to many in the U.S.

It was this documentary, “Trumpland,” that led to a book deal for Eyal, but from the beginning, he decided that Trump would not be the centerpiece of his project. “The era of the revolt is too momentous, too consequential, to be defined by Trump or by the media’s addiction to him,” Eyal writes in the book’s introduction.

The English edition of Revolt, which was originally published in Hebrew in 2018, is not just a retelling of American political pundits’ conversations about the so-called “white working class.” He connects political discontentment among U.S. industrial workers to Syrian refugees fleeing to Europe and even to radical climate activists. Rather than making an argument about the recent rise of nationalist leaders like Trump or Jair Bolsonaro in Brazil, Eyal aims to focus on the people who feel they have been left behind in the global economy .

While many authoritarian leaders around the world have recently wooed their citizens with appeals to nationalism, Eyal posits that this energy could be cultivated for other ends.

“Speaking with my American friends, they want to believe that [Trump’s election was] an accident. It’s a fluke. I don’t think it is,” Eyal told JI. “I don’t want to say it’s a movement, but it’s a sentiment: Revolt. [But] it doesn’t need to go to the Trump side. It can go to positive stuff.”

The people, organizations and movements Eyal reports on in Revolt do not correspond to a specific political ideology, but rather reflect a general sentiment directed at systems and governments that people believe failed them. “What we’re seeing is a multi-layered, leaderless revolt of some sort against porous structures, which are deemed corrupt, hollow, or unrepresentative,” he explained.

The non-Hebrew editions of Revolt don’t include much reporting on Israel’s current political situation. Each version includes some local flavor: the German edition has a particular focus on the country’s neo-Nazi problem, while the Italian one has a lengthy section on COVID-19, the north of Italy having been devastated in the early days of the pandemic. The book will also be published and sold in local languages in countries including Brazil, Croatia, Spain, and the Netherlands.

The original Hebrew edition attempts to make the case to Israelis that, in the current moment, there is “only one [model] that is really successful within globalization, at least in the West, and that model is of a liberal democracy,” Eyal told JI. In his view, if Israel moves too far to the right or too far in the direction of the country’s ultra-Orthodox — in other words, if it abandons the tenets of what Eyal views as its liberal democracy — then Israel is “just going to destroy its own partnership with globalization.”

Eyal’s politics lean left, and his argument will make sense to progressives. He writes that growing the social safety net, and in turn increasing taxes, will help people like the Appalachian coal miners who are out of work and might not want to learn a new trade. But he also argues that labeling people who feel left behind by globalization as racist or backward is wrong. “It’s about not delegitimizing those people who are revolting, who feel that nothing works for them,” he said.

If the only people who lend legitimacy to those who feel left behind are radicals, then they will be drawn toward radical, authoritarian politicians. What Eyal wants to see is a “radical mainstream,” where more moderate politicians offer a solution to the very real problems of globalization, rather than “the radical sides of your party.”