In a sign of hope for the global travel industry, Passover hotel getaways show how to adapt to the pandemic 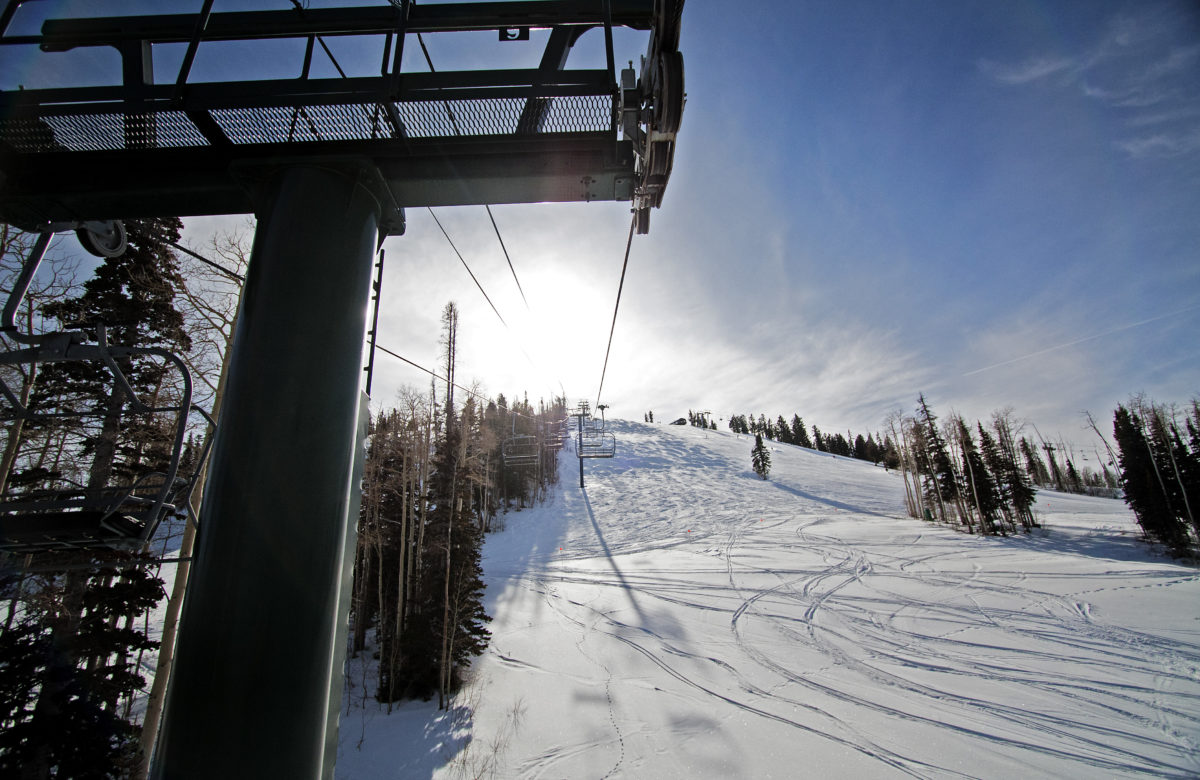 Skilift at Deer Valley in Park City, Utah. The resort is holding a luxury Passover program this year.

Next year in Jerusalem. Last year on Zoom. This year — vaccination proof or negative test in hand — in Miami.

The end of the coronavirus pandemic is in sight — millions of Americans have already received the COVID-19 vaccine, and many are ready to party. Or at the very least, spend Passover at a luxury resort with gourmet kosher food.

Passover is a holiday typically celebrated with family and friends, at large Seders that go on for hours. After the pandemic forced Jewish families around the world last year to host downsized Seders, people are beginning to plan larger celebrations, asking guests to have either a vaccination or a negative COVID-19 test. This year, several dozen luxury Passover retreats are operating around the U.S., roughly a quarter of the number that normally run in a typical year — but more than the zero that were in operation last year.

The all-inclusive getaways — which can cost up to $11,000 per person — offer a week of kosher food, entertainment and activities to those who want to celebrate Passover without the hassle of cleaning a household and with the luxuries of a getaway stay. Though operators are implementing COVID precautions, including capacity limits in dining rooms and mask requirements, thousands of people want in.

“The interest has just been mega,” said Raphi Bloom, the co-owner of Totally Jewish Travel, a website that serves as a directory for Jewish travel companies and programs around the world. “It’s unbelievable. Considering the world we live in, the desire for people to travel is just incredible.” Spaces at these programs usually fill up months in advance. Now, less than a week before Passover, families are still trying to find spots at these retreats.

In a normal year, about 130 Passover programs are offered at luxury resorts around the world, in places like Miami, Puerto Rico, Mexico and Tuscany. Bloom estimates that upwards of 100,000 hotel rooms are sold each year for Passover vacations. “Some of our program operators will do an entire hotel buyout,” said Bloom, while others “will do a partial buyout where they’ll buy 50 rooms or 100 rooms and one of the banquet rooms and one of the kitchens.” In any case, attendees get access to extravagant Seders, multiple minyanim, buffets open round the clock and entertainment ranging from live music to rabbis-in-residence to guest speakers like conservative commentator Dennis Prager and parenting expert Sharon Mazel.

Last year, Passover program operators were forced to shut down at the last minute, when shelter-in-place orders emerged at the start of the pandemic. Many companies offered partial refunds or full credit toward a retreat this year. In some cases, operators had to forego a year’s salary.

This year, about a quarter of Passover programs are operating. Many, like those in parts of Europe where lockdowns remain in effect, are not able to operate at all, while certain American companies are forgoing programming this year in order to give the industry a year to bounce back. Some retreats have moved location from states with more restrictions to states with less. Others are going ahead with their normal programming, with some adjustments. “Everything about the whole landscape is different in terms of how we operate,” said Avi Lasko, president of Lasko Getaways, a travel company that this year is operating three Passover programs in Miami and Orlando.

“We have put a lot of COVID precautions into place, but we are running a full program, not cutting back or scaling down on anything,” Lasko explained. “In fact, I would say it’s just the opposite. It’s probably more than ever before. We’re doing more programming and more entertainment and things that are obviously very COVID-safe, but we’re really putting all of our effort into making this a fantastic program.”

In a typical year, Lasko’s three programs draw up to 3,000 guests. This year, he expects to serve about 1,000 people, due to capacity limits his company has set. But among participants, the desire to be on a vacation and with the Jewish community is enormous. “A lot of people have told us this is the first time they’re leaving their own house or their state in more than a year,” Lasko observed.

There is at least one entirely new program this year, in a location that could never have hosted a Passover retreat in the past: Dubai. “Since the Abraham Accords were signed last year, there’s been an explosion of kosher travel to Dubai in the UAE,” Bloom said, referring to the deal brokered by the Trump administration normalizing relations between Israel, the UAE and Bahrain. “Rooms are still being sold as of today,” Bloom said last week. “Even 10 days, 11 days before Pesach, people are still booking to get on a plane to Dubai.”

The luxury Passover hotel industry has grown exponentially in the past decade, although its roots date back to the Catskills resorts popular in the mid-20th century. Due in part to discrimination — and the difficulty of finding kosher food — Jews have long traveled en masse, and the Catskills provided a close, convenient option for people from New York City looking to get away. But with the rise of air travel in the 1960s and 1970s, people began to travel to farther-flung destinations, leading to the decline of the Borscht Belt resorts in upstate New York.

“Twenty-five or 30 years ago, if you wanted to go on vacation and have kosher food, you would either have to schlep it with you — you have to buy frozen meat or fresh meat and take it with you on the plane or in the car — or if you are going on a cruise, you could order kosher food, but it would be basically an airline meal,” said Totally Jewish Travel’s Bloom. “So everybody else is at their tables getting full service, [but] the waiters will be bringing you a triple-wrapped plastic dish in foil.”

Mediocre pre-packaged kosher meals are no longer a necessity for observant Jews who wish to both travel the world and keep kosher. “As people’s demands got greater and as the ease of transporting the food around the world got greater, travel companies started to offer kosher tours,” Bloom explained.

Passover is the biggest event for the global kosher travel industry, but Jewish travel companies offer tours year-round. “You can go on a five-star Glatt kosher safari in the middle of South Africa or Zimbabwe,” said Bloom. “The company will hire a chef, they’ll get a mashgiach, fly in all the kosher meats, and you can eat like a king in the middle of [South Africa’s] Kruger National Park.”

Of course, most of those programs are not operating right now amid the COVID threat. But the Passover programs that are taking place this year offer an opportunity for Jewish travel operators to find out: Are people going to travel when the pandemic winds down? The answer is unequivocally yes — even if travel might not look exactly the same.

Some of the Passover programs are tweaking their offerings so that individual families can have private service. Instead of getting a block of hotel rooms, with family members eating in the same communal spaces as the other guests, a family might rent a private villa, with a full-service chef and catering service provided by the travel company.

Yocheved Goldberg, the rebbetzin at Florida’s Boca Raton Synagogue, told JI that a lot of members of her community are going to Orlando and renting houses at resorts that offer in-home catering. “That’s very popular,” Goldberg said, noting that people generally booked those private houses months ago, “when they weren’t sure the [Passover] programs were opening and didn’t want to risk not having an option.” But not everyone who previously used to travel will do so this year. Many people who used to go to the luxury getaways every year were forced last year to buy Passover dishes and host Seders. “They’re all set up to do it again,” Goldberg explained, and many have realized “it wasn’t so bad.”

Some people see Passover 2021 as the first opportunity for a full, in-person Jewish celebration in more than a year. “Purim [in 2020] was the last holiday before everything shut down literally overnight,” said Rabbi Steven Burg, CEO of Aish HaTorah, “and, I think at that time, everyone was saying, by Pesach, by Shavuot, then it was by Rosh Hashanah [that things will reopen] — that’s how we divvy up our years, totally based on holidays, so just the ability to be with people is nice.”

Burg will be a scholar-in-residence at a Passover retreat in West Palm Beach, where he will spend the holiday with his family. The hotel is requiring either proof of vaccination or a negative test within three days of arriving, and the hotel will offer testing on the reverse end for people who have to fly home afterward. Burg intends to focus his talks and discussions on reconnecting to Judaism after a difficult year of isolation. “Because everyone’s so spread out and split up,” he said, “we want to come together and really refocus on Jewish spirituality.”