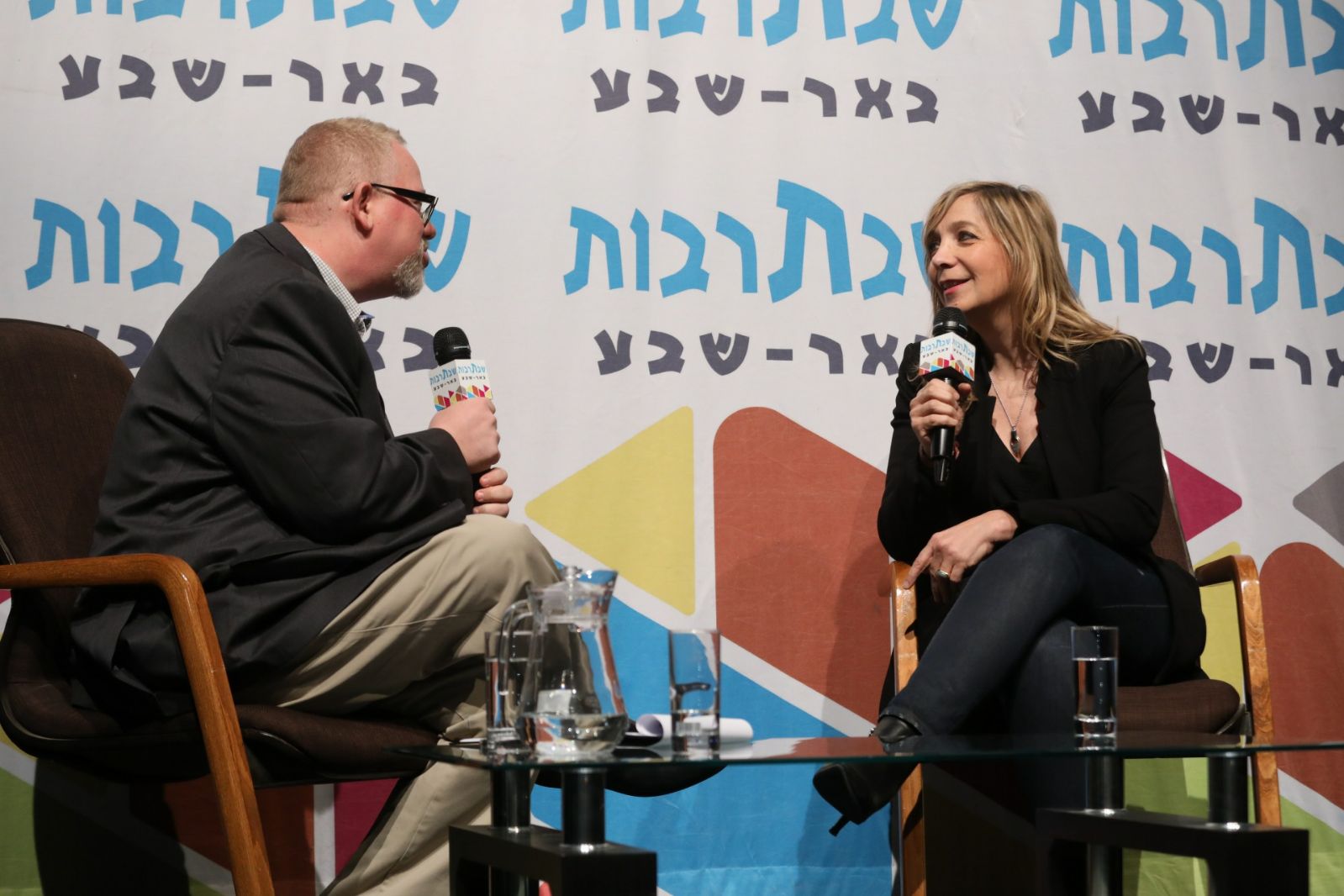 The Israeli lawyer on Facebook’s independent Oversight Board

At an introductory meeting of Facebook’s Oversight Board — the independent body formed last spring to make decisions about when to take down or leave up controversial posts on the social media platform — members were asked to participate in show-and-tell. None of them had met in real life, and rather than diving straight into dicey issues like political misinformation, hate speech and religious discrimination, the global cohort of board members wanted a chance to learn more about one another. So they met on Zoom for a virtual ice-breaker.

The idea came from Emi Palmor, former director-general of Israel’s Justice Ministry. “All the members were a bit embarrassed [to go first] and I was like, ‘Okay, I’m Israeli. I’ll be the first one,’” Palmor told Jewish Insider in a recent Zoom interview. She showed them a framed photo (which she keeps in her bathroom so she can see it while she puts on makeup) of her mother and her mother’s sister as young children in Romania, weeks before they were sent to a concentration camp. Both survived the Holocaust. “The other board members were in shock,” she recalled. “They were like, ‘Oh, my God, what is this? This is too much information. This is so intimate and so open.’ So, OK, this is me.”

As the only Israeli and one of the few Jews on the Oversight Board, Palmor hopes to bring her mix of humor, chutzpah and Holocaust history to the body, which has been referred to as “Facebook’s Supreme Court.” According to the body’s website, it was created to “promote free expression by making principled, independent decisions regarding content on Facebook and Instagram.”

Reports that misinformation, violence and hate speech — including antisemitism and Holocaust denial — flourish on Facebook continue to dog the social media giant. The creation of the board was meant to allow a group of outside experts to weigh in on controversial cases and make policy recommendations to Facebook that will govern its 2.5 billion users. Its first decisions, which were handed down in January, involved topics including Russian hate speech directed at Azerbaijanis, COVID-19 misinformation and whether using a quote from Nazi propagandist Joseph Goebbels automatically signals support for Nazis. (It did not, the board ruled.)

The average Facebook user likely hasn’t heard about the Oversight Board or read its wonky case decisions. If they know anything about it, it’s probably this: The biggest decision currently facing the 19-member body is whether to maintain Facebook’s current ban on former President Donald Trump, who has been barred from the platform since the attempted insurrection at the U.S. Capitol on Jan. 6. Twitter banned the former president for good, so Facebook would immediately become the largest social media platform available to him if he is allowed to return.

The Oversight Board’s decision is expected in the next few weeks, though the board’s communications team made clear to both Palmor and Jewish Insider that she could not speak about Trump on the record. (On her call with JI, she briefly walked into the other room to get the framed photo of her mother and aunt as children during the Holocaust. Before she revealed the image, she joked, “It’s not a picture of Donald Trump. I promised you I will not mention him.”)

The former president aside, Palmor argues that everyone who uses the platform has a vested interest in the board: “If you care about Facebook,” Palmor argued, “you have to care about the Oversight Board, because I think that the Oversight Board is an honest experiment in trying to improve the platform. I think that the platform is like a baby, who grew up all of a sudden, and somebody has to educate it or somebody has to restrain it in certain ways.”

The board is not intended to serve as an all-encompassing content moderator; its members only review a handful of cases. Its decisions are meant to offer guidance to Facebook in its future handling of similar posts, akin to how Supreme Court rulings serve as legal precedent — although there is no requirement that Facebook do what the Oversight Board suggests.

The board’s members, comprising lawyers, journalists, academics and human rights activists representing 17 countries, face the unique challenge of building a legal institution from scratch. “Part of what attracted me to the board was the opportunity to create a legal institution,” Palmor said, referring to the group as a “regulatory startup… It’s very risky. It has a lot of chances to fail. But if it will work, it will be an amazing thing,” she said.

Palmor was also intrigued by the global reach of the board: “Israel has 9 million people, and the Oversight Board could influence 2.5 billion users. So it’s really a great honor. It’s a great responsibility. And for me, it’s also an opportunity to serve the citizens of the world. This is how I see it. I saw myself as a civil servant, so now I’m a civil servant of the world,” she told JI.

With members coming from countries as diverse as Indonesia, Yemen, Cameroon and Hungary, cultural challenges are bound to emerge, particularly on such thorny issues as freedom of expression. No one has said anything critical of Israel to Palmor, but she knows how Israel is perceived in many parts of the world. “Unfortunately, it used to be more popular to be Israeli in the past. Israeli politics are not, how should I say it, as acceptable as they used to be,” Palmor said. Members of Israel’s civil service “are really professional civil servants, and I feel uncomfortable with the fact that people might identify me with political figures, which is very common.” Her hope, she said, is “to feel comfortable to be myself and not to feel that I have to prove something.”

Since her appointment to the board last May, Palmor has found herself facing personal attacks from both the left and the right. When she was appointed to the body, several left-wing pro-Palestinian groups accused Palmor of censoring Palestinians in her tenure at the Justice Ministry, a claim she denies. “It’s a complete lie,” she told JI. The claims refer to the Israeli Cyber Unit, which can request that Facebook remove content that incites violence or expresses support for terrorism. “Whoever knows the Israeli judicial system knows that a director-general at the Ministry of Justice cannot interfere with the work of the prosecution, and the prosecution is the one who established the Cyber Unit,” she explained.

At the same time, Yair Netanyahu — the son of Prime Minister Benjamin Netanyahu and a conservative provocateur — has been “tweeting against me from the right wing, that I’m a representative of the Deep State and America, beware, because this is the new police of thought,” she observed. “If he is against me, and they’re against me, something is wrong with the picture, and the truth lies somewhere else completely.”

Palmor served as a civil servant for 24 years at Israel’s Justice Ministry under an ideological range of prime ministers. She worked as a prosecutor before running the Department of Pardons, and her time in public service culminated as the ministry’s director-general, its top non-political post. Throughout her career, she sought to increase diversity in the ranks of Israel’s civil service, aiming to recruit more Arabs, women, ultra-Orthodox Jews and Ethiopian-Israelis. She is best known for what has been called the “Palmor Report,” a detailed report published by the Justice Ministry in 2016 that acknowledged that Israel had perpetuated systemic racism against Ethiopian-born Jews.

She hopes to bring her experience fighting racism to the Oversight Board, in addition to “my perspective as a Jew on issues of antisemitism or on issues of genocide,” she said. She and her brother — the spokesperson for the Jewish Agency — learned about the Holocaust from their parents, who lived through it as children. (Her name, Emi, is an amalgamation of the names of two family members who were killed in the Holocaust.) With her parents, Palmor talked about the moral lessons of the Holocaust — protecting minorities — and, sometimes, the practical ones. “My brother was this intellectual child, he knew how to read since he was 3, and everywhere we went, he had a book, and he read his books,” Palmor said, “and I would climb trees and jump into the ice water.” She noted that her mother often says, “[Emi] will survive. When the next Holocaust comes, I trust her.” Or, as Palmor puts it: “[My mother] prepared me to survive alone in the forest.”

The first question Israelis usually ask Palmor about the board is whether she has met Facebook CEO Mark Zuckerberg. “The answer is definitely not, and not planning to. We are an independent board,” she explained. “I really, really don’t take into consideration what it means, not for Mark Zuckerberg, not for Facebook.” The board is technically funded by Facebook, which put $130 million into a blind trust to be managed by the body’s full-time staff. The New Yorker reported that board members earn six-figure salaries for 15 hours of work a week.

As a career civil servant, independence is crucial to Palmor. “I’m involved in so many other projects in order to make sure that I will never be dependent on this work with the Oversight Board,” she noted. “I am always ready to leave the board.”

Two-and-a-half billion people around the world use Facebook, “and many of them are frustrated with the platform. And soon enough, they will be frustrated with us,” she said. “I’m not naive.”