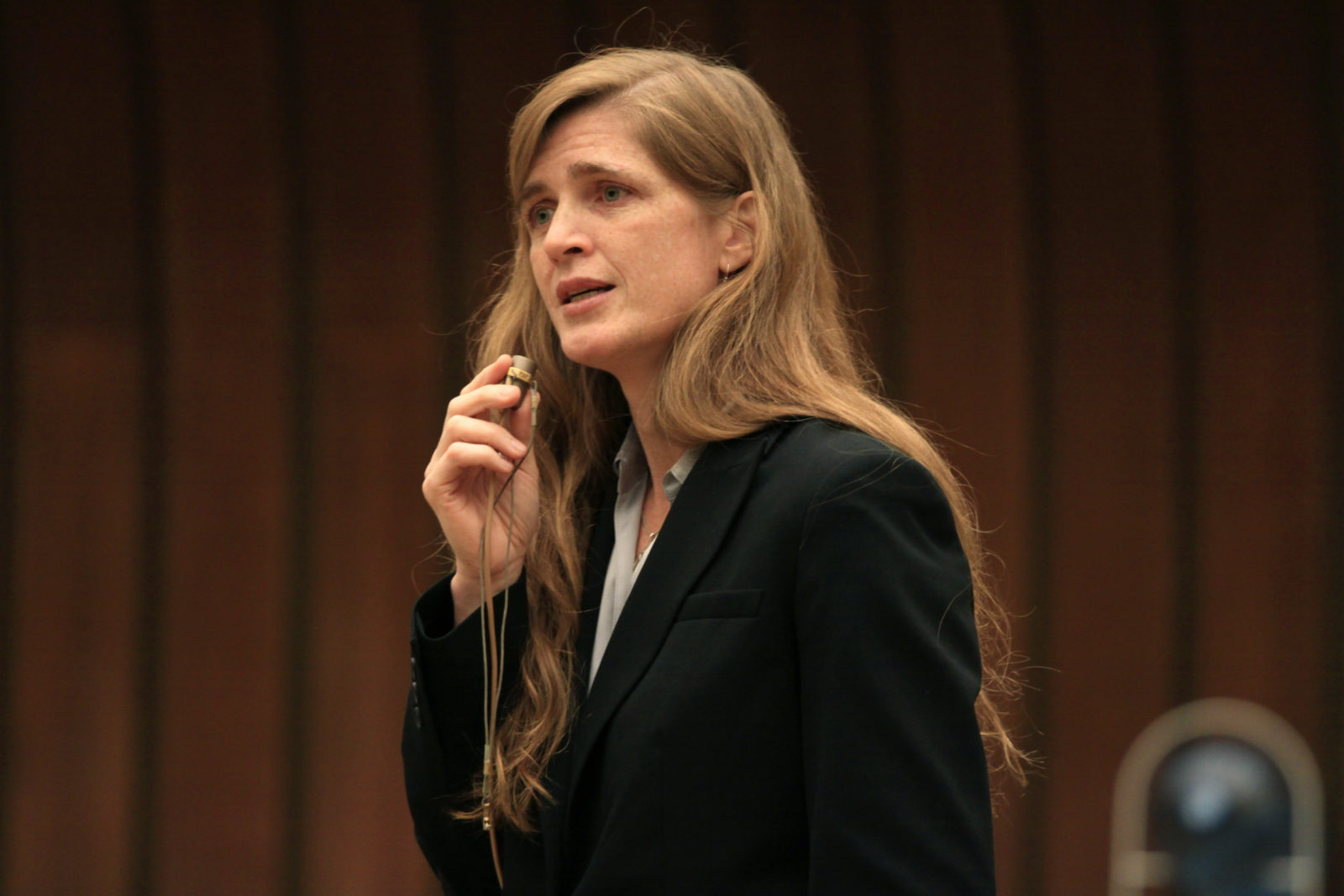 President-elect Joe Biden’s nomination of Samantha Power to lead the U.S. Agency for International Development, a decision he announced on Wednesday, is in some ways an unusual choice. Power, a well-known former ambassador to the United Nations, humanitarian activist and foreign policy expert, will be tasked with running a low-profile, nonpartisan agency whose basic goals include administering assistance to developing countries.

“She won’t be making policy,” remarked Martin Peretz, the former owner of The New Republic, who published Power’s Pulitzer Prize-winning first book, A Problem from Hell: America and the Age of Genocide, in 2002. “There is no ideological content to her job.”

But throughout her protean career in journalism, academia and politics, Power has often demonstrated a facility for adaptation — as well as an ability to lend urgency to whatever role she occupies. Power’s strong views in favor of humanitarian intervention earned her a job with Barack Obama when he was still the junior senator from Illinois, after which she crossed over into the White House as the former president’s senior director for multilateral affairs and human rights on the National Security Council. Between 2013 and 2017, Power served as Obama’s ambassador to the U.N.

That Biden has announced his pick to head the USAID a week before his inauguration — rather than after he is sworn in, as other presidents have done — is a signal of his faith in Power’s ability to reinvigorate an agency that is widely believed to have been mismanaged by the Trump administration at the height of a disastrous pandemic.

The former ambassador “will be a powerful force for lifting up the vulnerable, ushering in a new era of human progress and development and advancing American interests globally,” Biden announced in a statement, which also noted that he was elevating Power’s role to include a seat on the National Security Council.

For her part, Power appears ready for the challenges ahead, even if she has never worked in international development. “As a journalist, activist and diplomat, I’ve seen the world-changing impact of USAID,” she wrote in a Twitter message on Wednesday morning. “At this critical moment, I feel immensely fortunate to have the chance to serve again, working with the incredible USAID team to confront COVID-19, climate change, humanitarian crises and more.”

Still, the 50-year-old Power “has her work cut out for her,” according to a former high-ranking USAID official who served in the Trump administration and asked to remain anonymous in order to speak freely. The agency has foundered under Trump, the official told Jewish Insider, citing a lack of capable leadership as well as the administration’s recent order freezing billions of dollars in foreign aid, which has hamstrung USAID’s efforts in the final months of the president’s term.

“She’ll have to do a lot of clean-up,” the official said of the hurdles Power will have to clear as she steps into the role.

USAID did not immediately respond to a request for comment.

Even in the face of such challenges, Larry Garber, an independent consultant who worked for 15 years as a USAID political appointee in the Clinton and Obama administrations, believes that Power is the right choice for the job. “It’s an exciting appointment,” said Garber, who for a time played Sunday pick-up basketball games with the former ambassador. “I think she’s going to give some real buildup and morale at the agency and definitely provide the agency with a profile.”

Because of her experience at the U.N., Garber speculated that Biden will likely call on Power in her role as a member of the National Security Council, even if the topic of discussion extends beyond her immediate purview leading the agency. USAID is an independent agency, but Power will report to the secretary of state. Tony Blinken has been nominated to the position and is expected to be confirmed.

“USAID needs to be a critical piece of U.S. national security policy and have a seat at the table when national security issues are being discussed,” argued Garber, who envisions that Power will be involved in providing humanitarian assistance to Yemen as well as Syria — where ongoing civil wars have destabilized the Middle East. Garber, who previously led USAID’s Palestinian aid program in Tel Aviv, also imagines that the agency will restore foreign aid to the West Bank and Gaza which was cut off in 2019.

A spokeswoman for the Biden transition team did not respond to an inquiry regarding USAID’s future approach to the Middle East.

But the former USAID official is hopeful that Power will build on the Trump administration’s diplomatic achievements in the Middle East, including normalization deals between Israel, the United Arab Emirates, Bahrain, Sudan and Morocco. Though the official believes the agency is in disarray, some notable work has been accomplished, they said, such as an agreement with the UAE to jointly fund development projects around the world.

Also planned but not brought to fruition was the possibility of engaging in a trilateral development partnership with the UAE and Israel in Sudan. “That would be a great way to institutionalize the Abraham Accords,” the official told JI.

Jessica Trisko Darden, an assistant professor of political science at Virginia Commonwealth University, said that Power’s appointment suggests human rights “will be a key area of foreign policy focus” for the Biden administration. “Under her leadership, USAID is likely to focus on democracy promotion and strike a strong contrast to the Trump administration’s efforts to restrain intervention abroad,” Trisko Darden noted.

Still, she added, “Power’s nomination is likely to be challenged by supporters of Israel who were alienated” by her role five years ago as U.N. ambassador in abstaining from voting on a Security Council resolution condemning Israeli settlements in the West Bank and East Jerusalem as a “flagrant violation under international law.” That Power didn’t veto the resolution was considered a strong rebuke toward Israel.

Despite the abstention, Power was critical of the U.N.’s approach to Israel in a speech at AIPAC’s 2015 policy conference the year prior. “It is bitterly unjust that the United Nations, an institution founded upon the idea that all nations should be treated equally, is so often used cynically by member states to treat Israel unequally,” she said. “These attacks on Israel’s legitimacy are biased, they are ugly, and the United States of America will not rest until they stop.”

“We believe firmly that Israel’s security and the U.S.-Israel partnership transcends politics, and it always will,” Power added.

Power’s allies in the pro-Israel community say her record is solid. “I went to Israel with her in 2016,” said Jewish Democratic Council of America CEO Halie Soifer, who worked for Power as a senior policy advisor focusing on Israeli-Palestinian issues, among other matters, when Power was at the U.N.

“She has a deep understanding of the Israeli-Palestinian conflict and, on that trip, spent time visiting USAID projects,” including an initiative bringing Israeli and Palestinian students together to play basketball. “She believes in efforts like that, of sports diplomacy,” Soifer said. “She actually would play sports with children in every country she visited, when possible.”

With Power at the helm of USAID, according to Soifer, the agency “will no doubt be elevated both within the U.S. government and in the eyes of the world, where international leaders look to her — and have looked to her for some time — as the moral conscience of the U.S. government, certainly in the Obama administration.”

Abe Foxman, the former head of the Anti-Defamation League and a friend of Power’s, echoed that view. “SP will bring to USAID not only great experience, smarts and wisdom but also neshoma — heart and soul — in addressing humanitarian needs and crises,” he told JI via email. “She will ably advance America’s interests globally with a clear sense of moral conscience. She literally put Yom Kippur on the U.N. calendar.”

Power, who is married to the constitutional law scholar Cass Sunstein, began her career as a foreign correspondent covering ethnic conflict in the former Yugoslavia. She went on to found a human rights center at Harvard University before entering politics. In 2019, she published a memoir, The Education of an Idealist.

Though the USAID posting may not generate as much buzz as some of her previous positions, Garber, the former longtime USAID appointee, is convinced that Power will still nonetheless play an important role serving under the next president.

“She’s clearly going to have influence in the Biden administration,” he said.