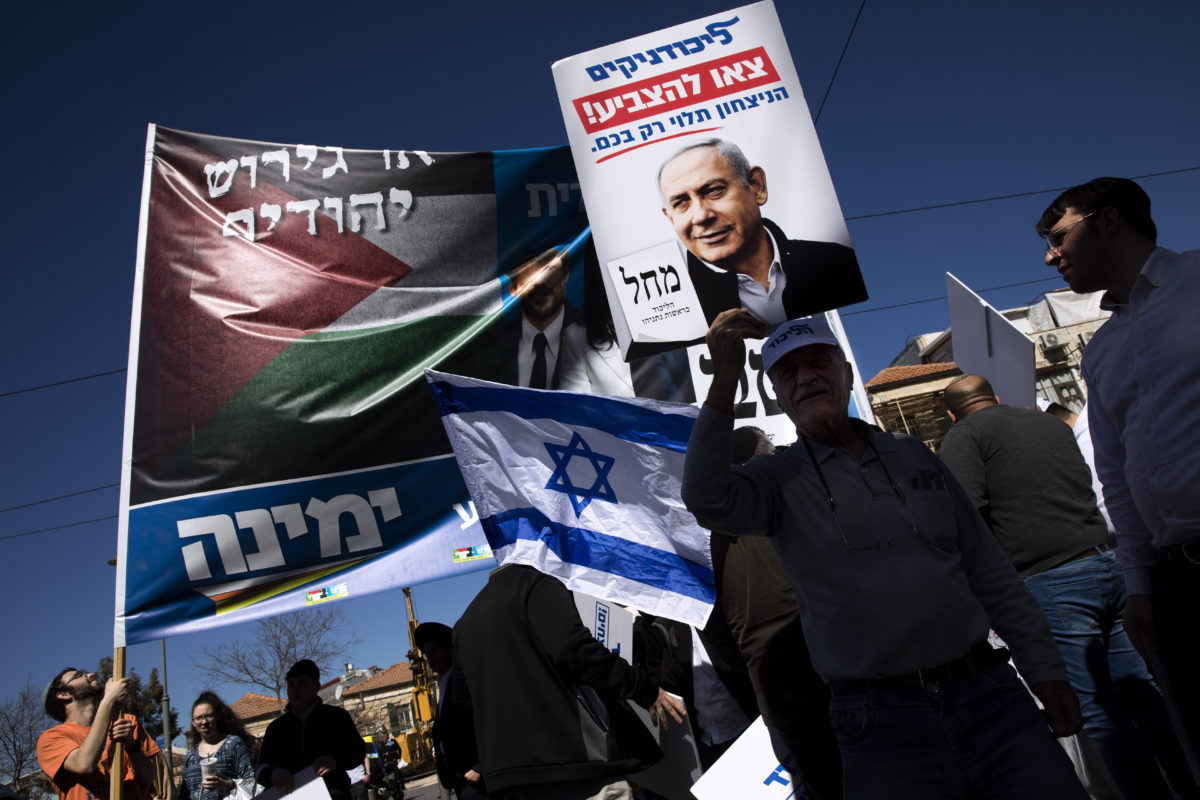 Party activists hold election posters and flags in the Mahaneh Yehuda market in Jerusalem on Feb. 28, 2020.

Two Israeli political parties will hold their leadership primaries in the coming week, with just over two weeks to go until parties must finalize and submit their electoral lists. And with two months until the March 23 national election, interparty negotiations are ramping up as factions across the political spectrum seek to consolidate their electoral power.

Leadership battles: After former Education Minister Rafi Peretz quit politics, the faltering Bayit Yehudi Party will hold a leadership primary tomorrow, Jan. 19. The two main candidates in the running are Deputy Jerusalem Mayor Hagit Moshe and party CEO Nir Orbach. And a Supreme Court ruling last week confirmed that the Labor Party leadership primary will go ahead this Sunday, Jan. 24. The only two confirmed candidates so far are Labor MK Merav Michaeli and Gil Beilin, but several party insiders are reportedly lobbying former Prime Minister Ehud Barak to enter the race. Candidates have until Friday, just two days before the all-digital vote, to decide to join. If either Moshe or Michaeli emerge victorious, they could become the only female head of a political party this election.

Primary watch: Jerusalem Post political correspondent Gil Hoffman told JI that the two primaries — despite being held in parties currently polling below the electoral threshold — could have major implications. “These primaries are actually very important on a national scale,” he said, “because there’s a couple of things that can’t happen until we know who wins these primaries.” In Bayit Yehudi, Hoffman said, Moshe is seen as an ally of Prime Minister Benjamin Netanyahu, while Orbach is seen as aligned with Yamina’s Naftali Bennett, shaping up their potential future alliances. And in Labor, Hoffman added, “[Tel Aviv Mayor Ron] Huldai wants to be head of Labor without all of the baggage.” So he would merge with Michaeli if she becomes the party’s leader, Hoffman posited, but he wouldn’t join with Barak.

Merger machinations: Meanwhile a whole host of other parties are engaged in negotiations to join forces ahead of the Feb. 4 filing deadline, with speculation running rampant. On the center-left of the spectrum, Huldai’s The Israelis Party, Defense Minister Benny Gantz’s Blue and White Party, Yair Lapid’s Yesh Atid, Labor, Meretz, and a host of smaller factions are continually rumored to be in talks. “The Israeli Left is plagued by too many egos, too little voters, and a growing sense that they offer nothing new to the public debate,” Israeli journalist Neri Zilber told JI. While he called the current landscape unpredictable, Zilber posited that the “center-left — everything from Yesh Atid to Meretz — has to consolidate,” noting that the current proliferation of parties “is way too many and runs the risk of throwing votes away below the electoral threshold.”

Waiting game: On the right of the political map, Bennett’s Yamina, Bezalel Smotrich’s newly renamed National Zionist Party and Bayit Yehudi have all pledged to run independently, despite battling for many of the same religious-Zionist voters. But once the Bayit Yehudi leadership primary is settled, predicted Hoffman, at least one, if not two, mergers are bound to follow. And former Defense Minister Moshe “Bogie” Ya’alon, who split from Lapid last week to run at the head of his Telem faction, “can actually go in a lot of different directions,” said Hoffman, suggesting that he could join Gideon Sa’ar’s New Hope Party or eventually even reunite with Lapid. But, he posited, there is too much bad blood for Ya’alon to rejoin with his former ally Gantz. “Everything is personal and it always has been,” said Hoffman, noting that party officials have told him “it’s a matter of values and trust. And when values are flexible, that leaves trust.”

Poll perusal: Israel’s polls — of varying reliability — show a deeply fractured electorate — and a difficult path to building a coalition for any premier contenders. In four polls released last week, Likud received 27-32 seats, New Hope got 14-17 seats, Yesh Atid 13-14 and Yamina 10-14. Several polls show that, if they run alone, Labor, Bayit Yehudi, Blue and White, The Israelis and Telem would fall beneath the electoral threshold. Meanwhile, many observers have speculated that Israel’s wildly successful COVID-19 vaccination drive could boost Netanyahu among undecided voters.