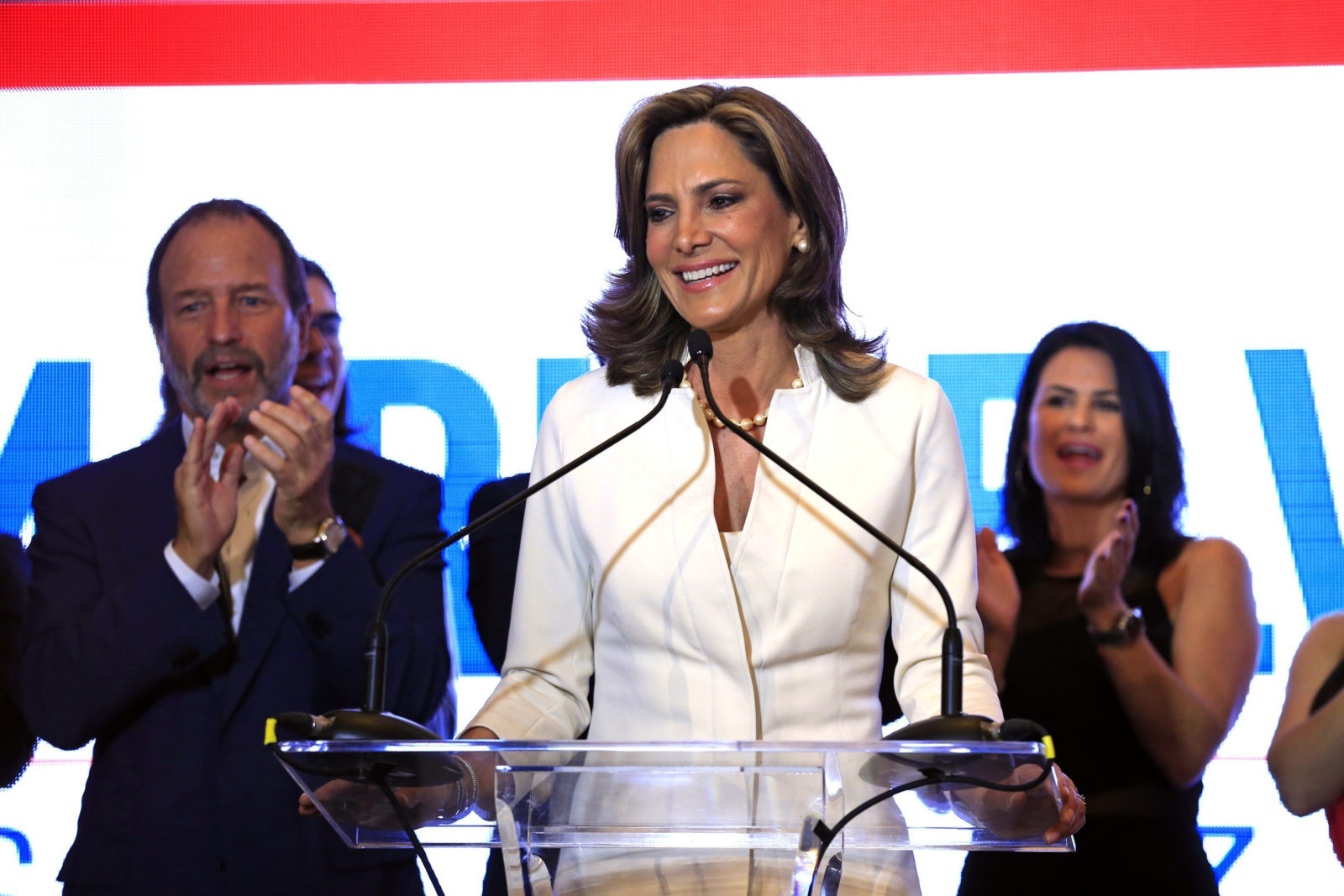 Of the 12 Republicans so far who flipped congressional seats this election, Maria Elvira Salazar may have pulled off the most surprising upset of them all. Her nearly three-point win over Rep. Donna Shalala (D-FL), a first-term incumbent, sent an unsettling message to Democratic Party leaders who expected to expand their House majority while bewildering political analysts who believed Shalala’s seat was secure in a South Florida district where voters have recently — and overwhelmingly — supported Democratic presidential candidates.

But in the weeks leading up to November 3, Salazar, a 59-year-old former TV journalist, was certain that she would prevail, despite having lost the race to represent Florida’s 27th congressional district just two years prior. Speaking with Jewish Insider just days before the election, Salazar emphasized that she was more than ready for the Miami Beach rematch, confidently predicting that she would garner votes from a majority of independents while peeling Hispanic Democrats away from her opponent.

Her view was prescient, as a surge of Latino voters in Miami-Dade County helped buoy GOP candidates across the board in a stunning election-night outcome credited in part to an unrelenting Republican effort to cast Democratic candidates as socialists throughout the campaign cycle. The message, true or not, no doubt resonated among voters in Salazar’s district, home to a sizable population of Cuban-Americans who are sensitive to such charges. And Salazar, whose parents fled Fidel Castro’s communist regime, knew how to make them stick.

“I know my people,” she said in a follow-up interview with JI on Monday afternoon, speaking from the lobby of a Washington, D.C., hotel. “I know my city. I was born in Miami, I was raised in Miami, I have lived in Miami all my life.”

“When you say the word socialism in my district,” Salazar added, “people run the other way.”

Shalala, a former president of the University of Miami, learned that the hard way when she described herself as a “pragmatic socialist” in an interview with a local NBC station, later claiming that she misspoke. Still, there were other factors that gave Salazar an edge, such as the fact that Shalala isn’t Latina and doesn’t speak Spanish, limiting the scope of her interactions with constituents in the majority-Hispanic district.

“I paid my rent by working on Spanish television for 35 years,” Salazar averred. “So I knew who I was talking to. I was able to turn viewers into voters.”

Now that she is poised to enter Congress, Salazar, who has never held elected office, told JI she is ready to continue the fight against Democrats, who maintain a slim majority in the House and will hold the White House at least for the foreseeable future. She takes aim in particular at Rep. Alexandria Ocasio-Cortez (D-NY) and her progressive “Squad” members who, Salazar believes, have sent a message that the United States is somehow in need of a dramatic makeover — anathema to her conservative values.

With that idea in mind, Salazar co-founded the “Freedom Force,” a loose coalition of newly elected Republicans including Nicole Malliotakis (R-NY), Michelle Steel (R-CA) and Victoria Spartz (R-IN), whose purpose is to counteract what they regard as a growing socialist bent among progressive Democrats. “I came up with ‘Force,’ and then other members just put the ‘Freedom,’” Salazar said of the group. “The ‘Freedom Force’ — it’s a pretty good name.”

“We believe that the American agenda still works, that American exceptionality is still alive, and we need to send that message for the benefit of our children and future generations,” Salazar explained, while advocating for an evolutionary approach to government over policy proposals that reshape the social agenda. “If big government were to be so fantastic, then Venezuela should be Switzerland,” she told JI, “and it’s not.”

Salazar, who will represent a large Jewish voting bloc in Miami Beach, added her belief that some progressive Democrats have alienated Jewish constituents with what she regards as antisemitic rhetoric, and she vowed to serve as a strong voice for the Jewish community after she is sworn in.

“The Jewish community in the United States and all over the world has been the group of people who have suffered the most in the history of humanity,” she said. “There has to be some respect for that suffering and for what’s happening right now in the Middle East, where Israel is under attack.”

During her campaign, Salazar said, she formed a close bond with the Jewish community in Miami, where antisemitic attacks have put Jewish leaders on edge. “I went to all the rabbis,” she told JI, “and I said to them, ‘Rabbi, you may not know me, but I love Israel, and I love my Jewish community, so I want you, please, to support me.’”

While Salazar may have overstated the breadth of her outreach — Rabbi Marc Philippe of Temple Emanu-El in Miami Beach, for instance, told JI he had never heard from her — several rabbis said the representative-elect had gone out of her way to forge a connection with Jewish voters, particularly those of Cuban descent.

“What I would say is that she takes the Jewish community very seriously,” said Rabbi Daniel Hadar of Temple Moses, a congregation that includes Sephardic and Ashkenazi Jews from Cuba. “She cares deeply about antisemitism and also how socialist policies have also been problematic for Jewish communities in other countries, and because of that I believe the Jewish community was ready to support her and listen to what she had to say.”

Rabbi Eliot H. Pearlson of Temple Menorah, who leads a heavily Cuban-Jewish congregation, met Salazar during her first congressional bid and was immediately impressed. “She really, really cared about Israel,” he said.

Though he is a registered Democrat, Pearlson said he decided to support Salazar over Shalala, who is regarded by many as a pro-Israel stalwart but whom he found inattentive during her time in office. Salazar, by comparison, was curious and hands-on in her effort to understand his community’s needs and concerns, he averred. “It’s a lot more than politics,” he said. “She really created a relationship with us.”

Salazar, who was raised Catholic and became a born-again Christian at 18, has never been to Israel but plans to visit when she is in Congress. She has long wanted to go, but said she held off because she hoped to take her two daughters, who are in their early 20s, when they were old enough to appreciate the trip. “I really wanted them to see Israel and to see the promised land and to see this miracle in the middle of the Middle East,” she said.

In the House, Salazar hopes to sit on the Foreign Affairs Committee, but is also interested in Transportation and Infrastructure as well as Homeland Security. She believes that her previous, decades-long experience covering world events as a broadcast journalist for Spanish-language networks like Telemundo, Mega TV, CNN Español and Univision will serve her well. “I was a news reporter for Latin America,” she said. “I was a war correspondent in Central America. My line of work was always in Spanish America. I know the continent and the Western Hemisphere very well. I think that that’s my forte.”

“Central America needs a new approach,” she added. “If we want to make sure that our borders are secured, we need to keep those people home. The only way that you can keep them home is by giving them some type of hope or prosperity or jobs. So it’s our duty as the United States, the most influential country in the hemisphere, to help them reach that goal. And then, by the same token, that will help us detain illegal immigration. No one really wants to leave their country, no one wants to cross the border, no one wants to be an illegal. People want to stay home. So we’ve got to make it easy for them to do so.”

Such ideas suggest that Salazar will not walk entirely in lockstep with her own party, and in conversation with JI, she described her tentative plan to push the GOP in a more forgiving direction with regard to immigrants. “We have to come up with a solution for those people who are here in the country and don’t have any type of status,” Salazar said, referring to Dreamers as well as parents of immigrants and those who have only temporary protected status.

“I’m working out those details,” she said, “but I know that the GOP needs to look at that attentively.”

Salazar’s hawkish foreign policy approach, coupled with her views on immigration, suggest that she will in many ways be carrying on the legacy of former Rep. Ileana Ros-Lehtinen (R-FL), who served the 27th district for three decades until her retirement, when she was succeeded by Shalala.

The Republican congresswoman held hardline views on Cuba and often went against her party, according to Steven Tauber, a professor of political science at the University of South Florida, who hints that Salazar is well positioned to keep the seat in Republican hands.

“There is no question that Salazar is a great fit for the district,” Tauber told JI. “She is very well-qualified and well-known from her career as a journalist. Moreover, she is a relative moderate, which is key for that district.”

Matt Brooks, executive director of the Republican Jewish Coalition, echoed that view, describing Salazar as a “charismatic, patriotic, pro-Israel congresswoman in the tradition of” Ros-Lehtinen, “who provided the district with stellar representation until 2018.” He added: “We are proud to have recognized Maria’s potential and expect great things from her in the years ahead.”

As Salazar waits to be sworn in, making her way through freshman orientation, she made sure to note that she does not take the position lightly and that she has been awed by the transition process as the daughter of immigrants who escaped a brutal regime and settled in Miami so they could chart a more promising future.

“I think that the takeaway here is that, what a great system we have,” she said, adding: “It’s a perfect example of American exceptionality.”