Max Gross reimagines the shtetl in his ambitious debut novel 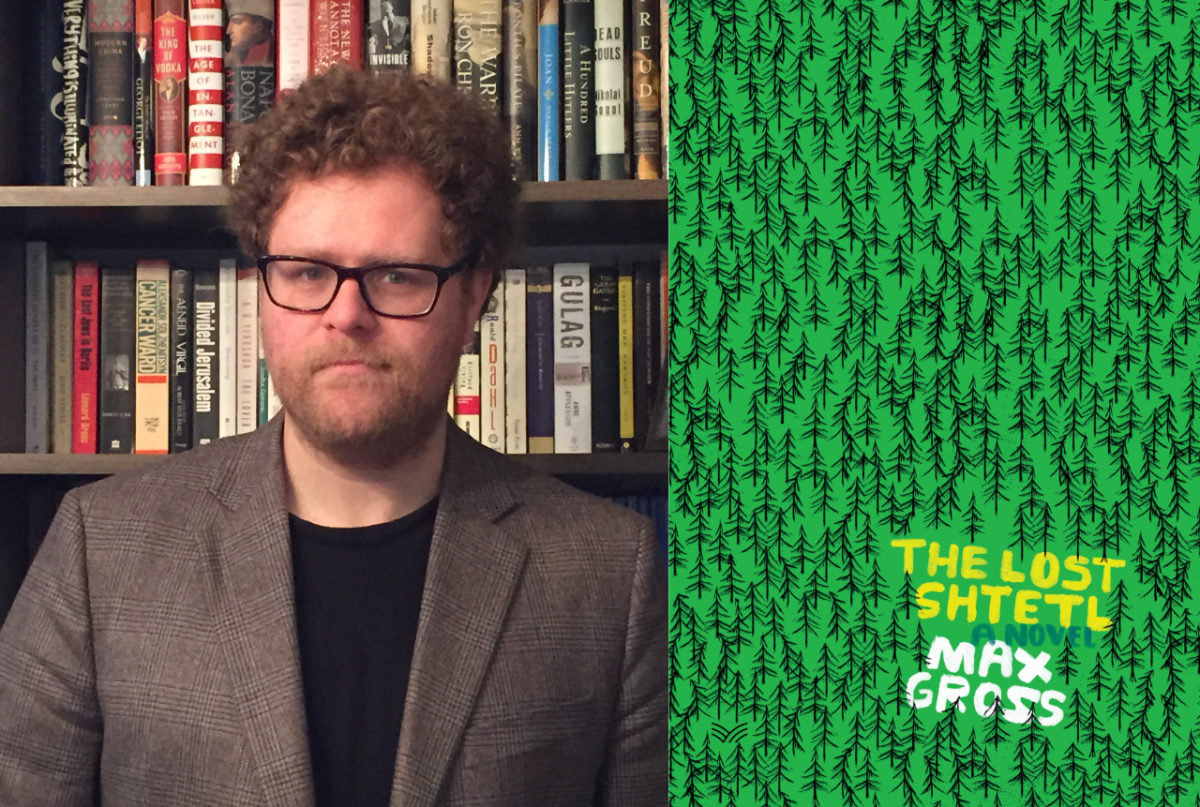 Author Max Gross and his new novel, 'The Lost Shtetl.'

By day, Max Gross works as the editor of a weekly commercial real estate newspaper in New York. For about the past decade or so, he has also been quietly chipping away at an ambitious and imaginative debut novel, The Lost Shtetl, published last month by HarperVia, an imprint of HarperCollins. The book’s title sums it up well: It’s about a cloistered Jewish village, tucked away in the Polish woods, which the Nazis somehow missed and that managed to evade the atrocities of the Holocaust. The twist is that it’s set in the 21st century.

The book seems, for now, to have escaped the attention of mainstream critics, having only earned notices in the Jewish press as well as a smattering of short write-ups in national publications. But for those who closely follow developments in Jewish literature, The Lost Shtetl represents what may come to be viewed as a kind of sleeper hit in the Jewish-American literary canon — a throwback to Yiddish luminaries like Isaac Bashevis Singer and Sholem Aleichem that nods to modern writers like Michael Chabon, Nathan Englander and even Seth Rogen.

“I think it’s a really interesting novel,” said Jessica Lang, chair of the department of English at Baruch College’s Weissman School of Arts and Sciences. “It’s an alternative history that comes dangerously close to engaging in a reenactment of disappearance, which I find, actually, kind of painful to read, but also just really fascinating to think through.”

Gross’s counterfactual novel centers on the shtetl of Kreskol, a community whose amber-sealed bubble is unceremoniously exposed to the outer world when an unhappy divorced couple leaves town and an unsuspecting baker’s apprentice named Yankel is dispatched to sound the alarm — a slapstick scenario that sets the village up not only for a clash with modernity but also for a reminder that antisemitism is alive and well. “One of the themes in the story,” Lang said, “is that history does repeat itself.”

“This little shtetl was preserved, but by the end you have the standard antisemitic tropes that have run through Poland for decades, if not centuries, before World War II,” she said, “and they’re reimplemented as Poles get suspicious.”

Gross, 41, has long been a Yiddish literature buff who holds a dark fascination with the Holocaust. He hit upon the idea for his first novel years ago while reading The War Against the Jews — a 1975 work of nonfiction written by Lucy Dawidowicz — and thinking about what he described as the “sheer efficiency” of the Nazi genocide.

“I just had this very perverse thought,” he told Jewish Insider in a recent interview. “I was like, how come the Nazis didn’t miss any of these little towns? There were so many of them scattered everywhere, and how was not one able to slip through their fingers? I just remember thinking, ‘Oh, what if one did?’”

And so Kreskol was born. Originally, Gross imagined that he would write a short story, but as time went on, and as he struggled to place the shtetl in the immediate aftermath of the Holocaust, he changed course, setting himself up for a bigger project.

“I was like, ‘Oh, it should happen now, it should take place now, and the story is about their rediscovery,’” he said. “I definitely wanted a Yiddishe folk tale to be told in the present day.”

Gross’s reimagination of the shtetl is something of an audacious literary act given that he is generations removed from the pre-Holocaust era in which Jews precariously occupied an Eastern Europe dotted with a constellation of shtetls constantly under threat from pogroms.

“I have very little religious connection to being Jewish,” said Gross, whose grandparents were all born in the United States but whose maternal great-grandparents were from a Polish village named Goworowo.

“We’ll do a Seder during the holidays, but I don’t really, you know, follow much of being a Jew except its historical meaning, except the sweep of history that the Jews are involved in,” he added. “It is one of the most dramatic stories that any writer could ever ask for, and the Jews themselves are such interesting people. It’s definitely captured my personal attention. It’s definitely something that not just for world historical reasons, but for personal reasons as a writer, I find one of the most compelling stories ever acted out.”

The Lost Shtetl functions as something of an outlier in modern Jewish-American literature as representations of shtetl life have mostly disappeared, with the exception of some novels by Rebecca Goldstein and Cynthia Ozick.

According to Lang, such depictions have largely been replaced by memoirs from the likes of Shalom Auslander and Shulem Deen, former Orthodox Jews who have written about escaping their present-day, shtetl-like communities.

“The shtetl in some ways has been reinvented,” Lang said. “But this actually is a throwback to the origins of the shtetl.”

For research, Gross traveled to Krakow and visited Auschwitz but for the most part relied on historical accounts. The most useful source, he said, was There Once Was a World: A 900-Year Chronicle of the Shtetl of Eishyshok, by Yaffa Eliach, along with books by Glenn Dynner, who chairs the religion department at Sarah Lawrence College and whom Gross hired to read and vet an early draft of The Lost Shtetl.

That tension is perhaps most conspicuously borne out when the character of Yankel returns to Kreskol in a helicopter that the townsfolk regard as a giant bird. For Dynner, the book “brings up questions of authenticity and, kind of, what does modernity entail, what have we lost,” he said. “It doesn’t really deal with the Holocaust in a way that’s it’s normally dealt with, which is this kind of pornography of violence.”

Gross, who lives in Queens with his wife and five-year-old son, is the editor-in-chief of The Commercial Observer and previously worked at The New York Post for about a decade, covering travel, real estate and food. Prior to the Post, in the early aughts, he worked as a cub reporter at what was then known as The Jewish Daily Forward, where he covered such pressing matters as the flat bagel, or “flagel,” and a supposed talking fish in the Hasidic town of New Square, N.Y.

His first book, From Schlub to Stud: How to Embrace Your Inner Mensch and Conquer the Big City, was a memoir released in 2008.

Journalism is something of a family tradition — his father, Ken Gross, is an accomplished author, and his mother was an editor at The New York Times — but Gross has always had an interest in writing fiction. Before The Lost Shtetl, he wrote an as-yet-unpublished novella about an Orthodox Jewish vampire, “which I thought was a very funny idea, because I thought he could be very neurotic about blood,” Gross told JI.

Gross said that he is working on a second novel but declined to go into detail about what it would entail. In the meantime, he believes there are lessons to be drawn from his latest work.

“One of the things that I think you see, and what I tried to do in this book, was show how jarring the modern world is and all of the baggage that’s in it, and how it’s sort of understandable, the desire for nostalgia, the desire to return to something that is simpler,” he mused. “That’s the fundamental question that I think a lot of the people in Kreskol are dealing with — and I think it’s a question that the world deals with today.”