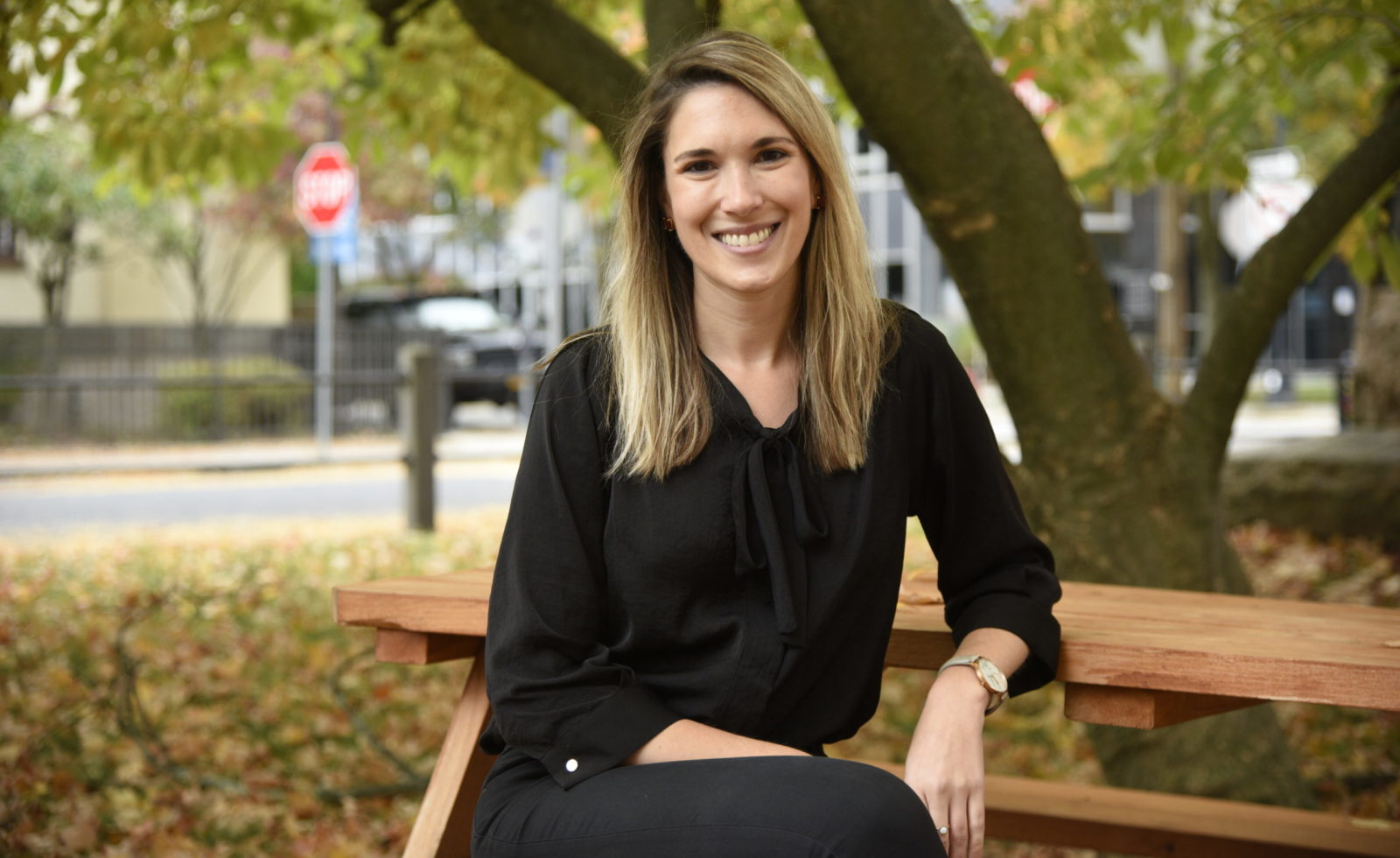 But will Michelle Hinchey mirror her father’s approach on Israel?

When Michelle Hinchey announced her bid for a New York State Senate seat last year, many recognized a familiar name. Her father, the late Democratic congressman Maurice Hinchey, was an institution in upstate New York, where he served for two decades, establishing himself as an early progressive and a staunch advocate for environmental reforms.

Now, Hinchey is hoping she can further her father’s legacy by entering public office at 32. Hinchey is emerging as a rising star in the state’s Democratic circles as she seeks to represent the historically conservative 46th district, which stretches from Kingston north to Schenectady and beyond. Among her prominent campaign donors are Facebook co-founder Chris Hughes and his husband, political activist Sean Eldridge, as well as real estate developer Scott Rechler and financier Anthony Scaramucci, who briefly served as President Donald Trump’s communications director.

During a recent interview with Jewish Insider, Hinchey recounted her experiences from childhood into her adult years accompanying her father at bipartisan policy conferences and traveling with him throughout the state as an aide during his last campaign, which she says prepared her well for her current run.

“He was just so ahead of his time in pushing for and helping people,” said Hinchey, seated at a picnic table in Kingston’s historic Stockade District, where her campaign office is based. “If I can now try to pick up that mantle and work to help even more people and pick up where those things left off in a moment where we really need that kind of leadership, I feel the onus is on me to do that.”

Given that ambition, it is only natural that those in the Jewish community would want to know where Hinchey stands on issues involving the Jewish state, an area where her father was often one of the lone dissenting votes in Congress on pro-Israel legislation.

As a member of Congress, Maurice Hinchey cast a number of votes that have been regarded as negative toward Israel. The congressman often found himself in a distinct minority on matters relating to the Jewish state. In 2009, he was among just 36 House members to vote against a resolution condemning the United Nations’s Goldstone Report, which accused Israel of war crimes. Hinchey also voted against the Palestinian Anti-Terrorism Act and opposed a bill imposing sanctions on Iran that was approved by all but 12 in the House.

Ed Koch, the former Democratic mayor of New York, endorsed Hinchey’s Republican opponent in 2010 because of the congressman’s stances on Israel.

But on this issue, the younger Hinchey appears hesitant to make her own views clear, even in the vague manner that many other political candidates addressing the Jewish community often do these days.

When asked about her views on three bills passed in the State Senate in recent years countering the Boycott, Divestment and Sanctions movement, Hinchey demurred.

“I haven’t seen them, and so I don’t want to take a hard position on them just because I’m not sure what the language is,” said Hinchey, adding that her campaign has been more focused on local affairs.

Pressed further on the likelihood of voting on the issue in the state Senate, Hinchey said, “I’d have to look at the exact bills. I mean, I’m not for BDS. But I don’t know what their exact language was.”

Hinchey — who is Jewish on her mother’s side and said she grew up attending High Holiday services at a local synagogue — was equally reluctant to speak about her father’s views on Israel. Outside of his votes, the congressman appears to have made few public statements on the matter. Had Hinchey ever discussed Israel and the Middle East with her father?

“No, it wasn’t something that we talked about,” she said. “I’m here to talk with you more about our race and running for upstate and being a young person doing that.”

Jewish community members in Ulster County, which was represented by Maurice Hinchey, voiced conflicting views on the congressman’s relationship to the Jewish state.

Michelle Tuchman, who worked on Hinchey’s second congressional campaign and served as the president of the Ulster County Jewish Federation, said Hinchey was progressive for his time and that his actions in Congress reflected that. “I don’t believe he would have supported BDS,” she told JI, “although who knows at this point?”

Tuchman described Hinchey simply as a man who did the bare minimum when it came to Israel. She would often meet with Hinchey when she later lobbied him on behalf of AIPAC — and, she noted, as a member of the powerful House Appropriations Committee, Hinchey always voted for the budget approving aid to Israel.

Still, Tuchman doesn’t believe that Hinchey would have characterized his legacy as one that was antagonistic to Israel. Hinchey, she recalled, was an admirer of former Israeli Prime Minister Yitzhak Rabin and was “heartbroken” when she broke the news of Rabin’s assassination to him. “I do believe in his heart he was a supporter of the State of Israel,” Tuchman said. “Whatever that meant to him.”

Rabbi Jonathan Kligler of the Woodstock Jewish Congregation, where Hinchey attended services with his family, believes that the late representative was “definitely not anti-Israel,” noting that he was most aligned with the dovish advocacy group Peace Now.

“I remember well when he spoke at the synagogue once after a congressional mission to Israel,” Kligler told JI. “Maurice was deeply informed, understood the complexities of the Israeli-Palestinian divide well, shared his frustration about the seemingly insoluble impasse and spoke with humility and openness about it all. Maurice also always voted his conscience, which is one of the reasons he was so respected, and did not always toe the party line.”

“Even if I disagreed with Maurice on some of those votes,” Kligler added, “I knew that I was dealing with a thoughtful and well-informed congressman.”

Kligler said he was unaware of where Hinchey stands on Israel, a sentiment expressed by all of the Jewish community members JI surveyed.

The political aspirant makes clear that she is focused on more local issues. Her vision includes building out the district’s broadband infrastructure, expanding green jobs and adding economic incentives for locals to stay in their communities.

“We need more upstate voices in the majority conference in Albany,” Hinchey told JI. “These are the communities that I grew up in, and that I want to raise my own family in, and that my friends are raising their families in. How do we make sure that we have a seat at the table?”

Jazmin Kay, a 22-year-old local political activist in Woodstock, said that Hinchey’s campaign is inspiring to young voters in the district. “Most young people are told that they have to leave, and that means that we are not building out systems that are conducive to them wanting to stay,” she said. “I’ve never heard anyone speak so directly to these issues.”

Hinchey worked in corporate communications for a decade before moving back to Saugerties three years ago to take care of her ailing father. When he died of frontotemporal dementia in 2017, she decided to stay in the area, joining now-Rep. Antonio Delgado’s upstart congressional campaign as a surrogate.

“It just really reaffirmed for me that this is the work that I want to be doing,” said Hinchey, adding that she sat on the congressman’s first environmental roundtable.

Delgado praised Hinchey in an email statement to JI. “Michelle brings a true understanding of the issues facing the 46th Senate District, and I look forward to working with her to ensure we are protecting our small farmers, our natural resources and bringing more jobs to the area,” said the Democratic congressman. “Michelle cares deeply about our communities, and she will be a much needed voice for upstate New York in Albany.”

Sajaa Tracy, vice chair of communications for the Ulster County Democratic Committee, said that Hinchey made a positive impression on voters when she helped Delgado flip the historically conservative 19th congressional district in 2018, knocking on doors and meeting with constituents in the area.

“That’s how I think people in the 19th congressional district, which is much of her Senate district, got to know her,” Tracy said.

Hinchey, who has been endorsed by the Working Families Party and Emily’s List, is going up against Republican Richard Amedure, a former state trooper distantly related to the incumbent, retiring State Sen. George Amedore.

Though Ulster County has a strong Democratic advantage, the district also includes some solidly conservative sections that favor Republicans, including Greene County.

Still, Hinchey feels confident she can prevail on November 3, despite her observation that the district is gerrymandered to favor Republicans. Her campaign has pulled in approximately $810,000, according to campaign financial disclosures from the New York State Board of Elections, while Amedure has raised only $107,000.

As a state senator, Hinchey would hold a position similar to one her father previously occupied. During his long run in Congress, he represented a district that leaned conservative, according to Louis M. Klein, an attorney based in Kingston who knew the congressman.

“It was far less liberal and progressive back then,” Klein told JI. “But he was able to develop a following and maintain that throughout all the years.”

Hinchey is banking on the expectation that she can do the same if she is elected next week. “People, I think, want change,” she said. “They’re ready for someone who shows up and someone who they can listen to and who is accountable and who’s transparent.”