Barbara Amiel, wife of Conrad Black, lays it all on the line

In a biting new memoir, the columnist and socialite recounts interactions with Ghislaine Maxwell, Princess Diana and Boris Johnson 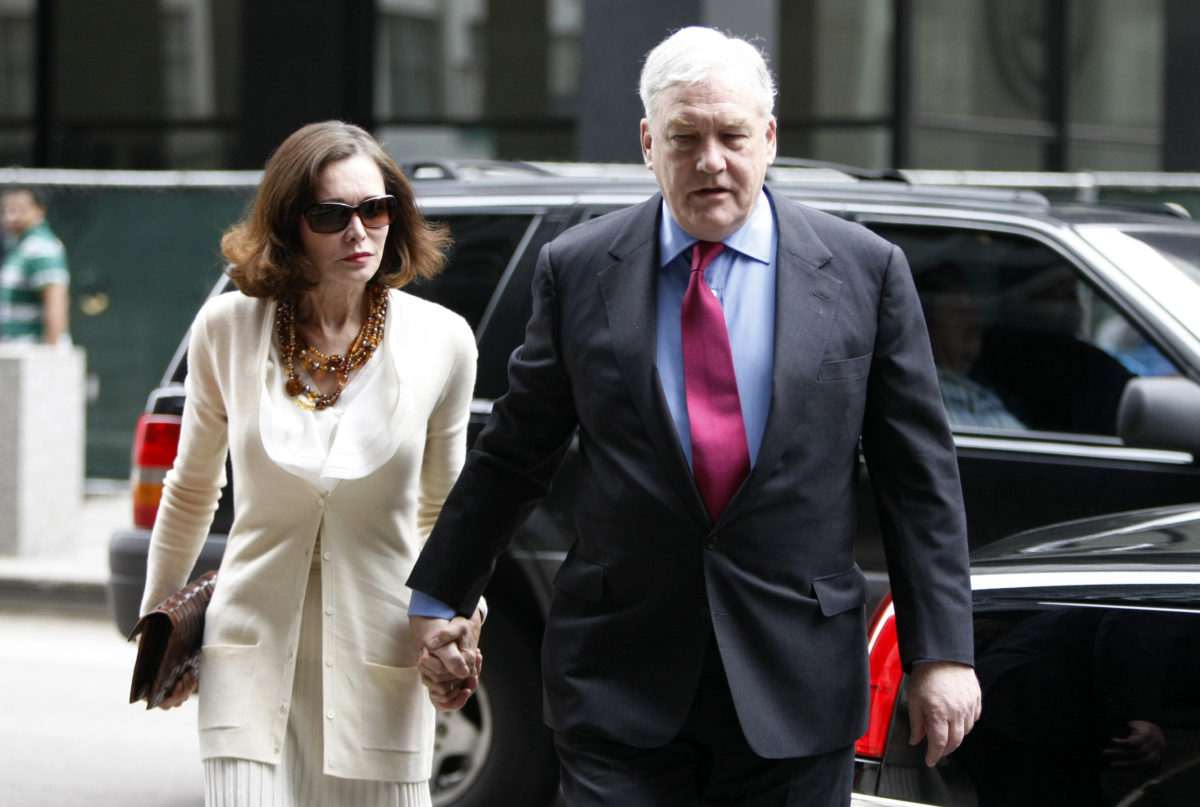 Barbara Amiel and Conrad Black arrive at a federal courthouse in Chicago in June 2011.

Barbara Amiel does not hold back.

The longtime columnist, socialite and tabloid mainstay has never been one to mince words. But never has Amiel — a self-proclaimed “scandalous ideological provocateur” — let loose quite as much as in her new memoir, out this week, titled Friends and Enemies: A Life in Vogue, Prison and Park Avenue.

The salacious, biting and oftentimes rambling recounting of Amiel’s nearly 80 years on earth spares no detail, laying out her own foibles — as well as those of the people around her — in black and white. Equal parts self-deprecating and catty, Amiel details her sexual exploits, her multiple marriages, extravagant spending habits, drug abuse, plastic surgery and even her brief stint in a Mozambique prison in 1980.

Amiel — the wife of Conrad Black, the financier and former newspaper mogul who wound up in U.S. federal prison — takes aim at all those who’ve wronged her in the book’s 600 pages, and tops it all off with a very literal list of, you guessed it, her friends and enemies. She casually muses about having journalists murdered, judges imprisoned and injecting “our persecutors” with the Ebola virus.

The first half of the book is devoted to Amiel’s life before Black’s downfall, where she recounts growing up in a British Jewish family before moving to Canada as a child, and always wearing “my tiny gold mezuzah” around her neck.

Amiel, who wrote a column at a variety of news outlets for close to 40 years, also served as the editor-in-chief of the Toronto Sun from 1983 to 1985. She was long known for her outspoken and vociferous support of the State of Israel. “In the U.K.,” she writes, “the strongest animosity was roused by my support of Israel, which was a real shocker to me.” In a chapter titled “The Bloody Anti-Semitism Chapter,” Amiel recounts the anti-Israel sentiments she encountered during her time in England, including from the Duke of Gloucester, who upon hearing that her husband was a newspaper owner, told Amiel: “The lowest form of humanity, rather like the Israelis.”

At a 2001 party Black threw for Boris Johnson, who was at the time the editor of The Spectator, Daniel Bernard, then the French ambassador to the U.K., referred to “that shitty little country Israel.” Amiel’s reference to those comments in a subsequent column caused an international incident. “A year and a half later he died prematurely, at sixty-two,” she wrote. “No rejoicing over that, my first kill.”

Amiel writes that under Black’s ownership, The Jerusalem Post “had been taken from a proper left-wing Peace Now (at any cost) newspaper to a supporter of two states but with secure borders for Israel.” In the epilogue, she notes that “once, briefly, in 1967, when I was twenty-six years old, I decided that Israel was where I wanted to live. My determination petered out with the end of the Six-Day War. Perhaps that is the decision I most regret. I would like to have become a citizen of a country that, for all its troubles and woes, is essentially the land to which I belong.”

But her exploits across the U.K., Canada, New York and Florida left her with plenty of fodder.

After settling in Palm Beach, Amiel writes, she was horrified to learn that her husband was a member of the Everglades club, which did not admit Jews. “Here I was, married to this wonderful man who had only one problem: the town in which he lived for a few months each year had clubs to which he belonged that would not admit his wife.” After Black waged a movement to allow Amiel to be admitted, she writes, “the Palm Beach Jewish community rose as one” to condemn her for joining. “With customary skill, I’d managed to piss everyone off.”

Across continents and around the globe, Amiel rubbed elbows with a veritable who’s who of the rich and famous.

She had more than a passing acquaintance with Ghislaine Maxwell, who is currently on trial for sex trafficking charges linked to her long association with Jeffrey Epstein. Amiel introduced Maxwell to Evelyn and Leonard Lauder and the four of them had a “damn uncomfortable” tea, she writes. At other times, Maxwell “had been importuning my friendship before our crash with repeat invites for us to go to Jeffrey’s island and relax.” But after Black’s downfall, Amiel recalls, Maxwell “bolted” away from her at a party.

Nevertheless, she said, “I have never believed Ghislaine guilty of any crime more than wanting to please Jeffrey or maintain whatever the relationship was — business or personal and likely both. And sometimes, when you are in a vulnerable position, you can be manipulated into unpleasant behaviour.”

Although she did draw the line at socializing with certain figures. “Anyone who has the slightest inkling of my politics knows that I would have to be gagged, drugged and tortured before inviting George Soros to my home,” she wrote. “Quite mutual, I expect.”

In 2007, Black — Amiel’s fourth husband — was convicted of fraud and sentenced to 3.5 years in U.S. federal prison before being released in 2012 and deported to Canada. In 2019, a year after Black — the former chairman of Hollinger, which at one point owned The Chicago Sun-Times, The Spectator, The Daily Telegraph and many other newspapers — published a flattering biography of President Donald Trump, the president granted him a full pardon.

Amiel adamantly maintains her and her husband’s innocence throughout the book. “I understood the skepticism about our innocence. No smoke without fire, and if we were innocent why did all this happen — I know,” she writes. “But these nightmares do actually happen to innocent people.”

She lays the blame for Black’s conviction on “the diseased underbelly of the American justice system,” and the media feeding frenzy that eagerly descended on the conspicuously wealthy couple. “There were just too many photos, too many pictures of us enjoying ourselves all over the place with important people,” she wrote. “See Barbara prancing around on the social pages of the New York Times. Read her fey comments about extravagance and clothes that gave Conrad’s enemies an open sesame. People were simply tired of us: tired of our being and our bloody self-importance in the pronouncements we made verbally or in print.”

The eponymous Friends and Enemies refers, quite literally, to a list of friends and enemies Amiel has collated at the end of the book: those who stuck by the couple through their saga and those “who, for whatever reason, became either poisoned by events or events allowed their poison to emerge openly.”

“There will be omissions and I regret most of all the friends who my compromised memory can’t retrieve,” she wrote. “As for the enemies I forget, probably that is all for the best. The mind has its own defences.”