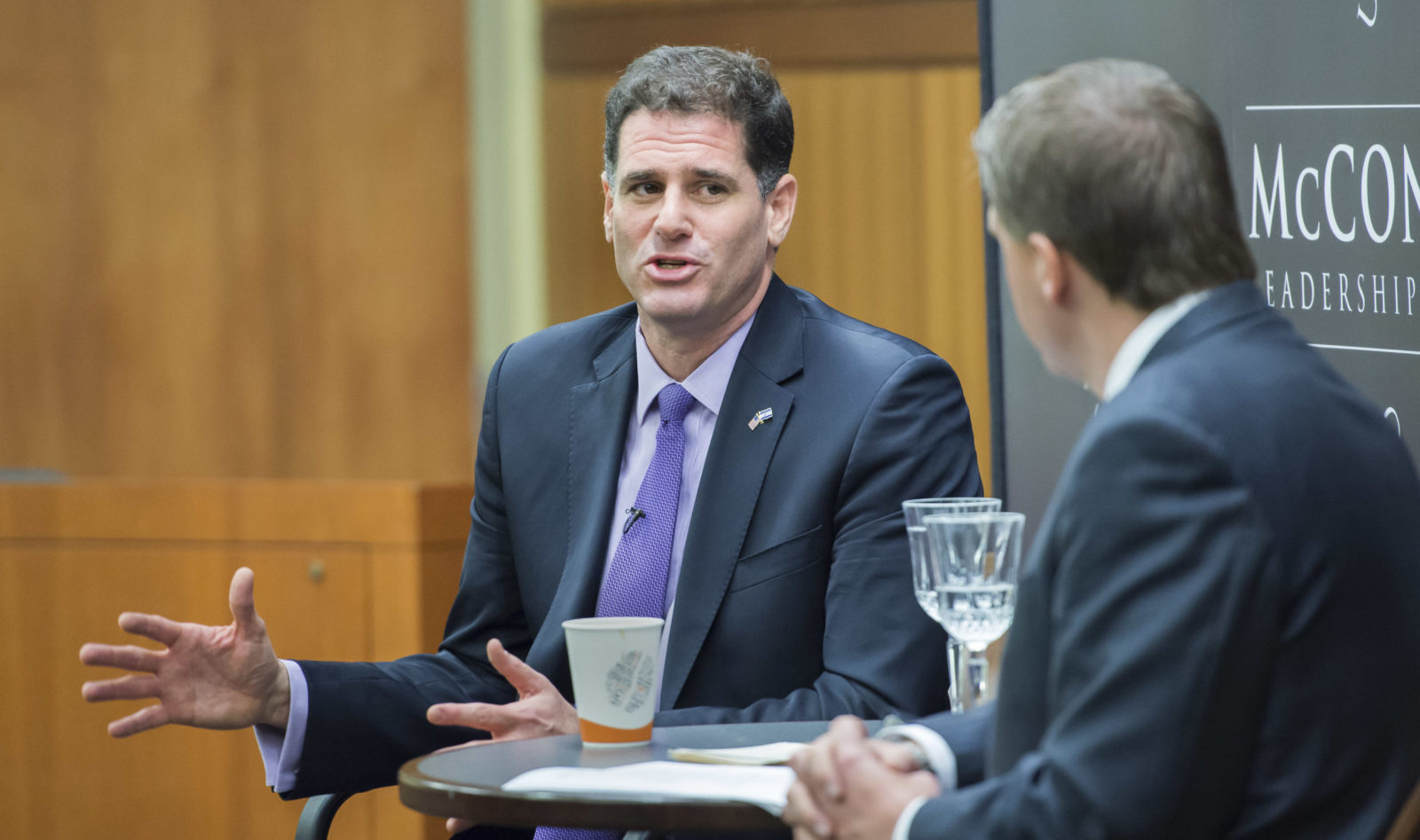 'To see this trajectory happen over 20 years now — against a lot of critics, cynics and opposition — I think is very gratifying,' Dermer remarked

Ron Dermer began his tenure as Israel’s ambassador to Washington in October 2013, just as the United States was on the verge of signing an interim nuclear agreement with Iran. The Obama administration’s talks with Tehran led to a public rift in the already tense relationship between then-President Barack Obama and Dermer’s boss, Israeli Prime Minister Benjamin Netanyahu. Seven years later, Ron Dermer finds himself in a radically different diplomatic situation.

The current occupant of the White House has enacted a series of decisions welcomed by Israel, including the dismantling of the remaining parts of the nuclear deal with Iran. And earlier this week — as Dermer wraps up the last months of his extended term in Washington — the White House hosted a historic peace summit between Israel and two Arab countries on the South Lawn.

In an hour-long interview with Jewish Insider on Thursday afternoon, Dermer reflected on the moment and noted with pride how this recent success has been his goal as ambassador all along: To further strengthen the relationship between the U.S. and Israel and to “leave this position in a better place than I found it.”

Dermer, who has been dubbed “Bibi’s brain,” first began working for Netanyahu in 2000, as the then-former prime minister was mounting a comeback following his defeat in the 1999 elections. In their first meeting, Dermer recalled, Netanyahu presented him with a video cassette of a speech he gave to an audience in Australia. In that speech, Netanyahu touted his vision for “peace through strength,” and explained that only an Israel that is militarily and economically strong can travel down a path of peace with its neighbors. “To see this trajectory happen over 20 years now — against a lot of critics, cynics and opposition — I think is very gratifying,” Dermer remarked.

The recent developments in the region came to fruition thanks to the trust the leaders had in their point people in Washington, Dermer said. “We were able to keep a very close hold among a really small number of people,” he said. “That’s how we were able to break this out.”

The Israeli ambassador noted that, in contrast with the peace deals Israel signed with Egypt and Jordan, the signing of the Israel-UAE accord is the first time an Arab country has expressed a willingness to have open and warm relations with the Jewish state. “Israel would like to have the warmest possible peace with Egypt and Jordan,” Dermer explained. “Certainly, cold peace is better than a hot war, and cold peace is better than cold war, but we haven’t had warm peace. And I think one of the reasons why is there are many forces inside those societies — political, economic and cultural forces — that militate against that. I don’t see that in the case of the Emirates.”

“A lot of things can go wrong in the Middle East,” Dermer continued, “and sometimes we’re used to a situation in the region where you take one step forward and two steps back. But I hope we’re on a path of two steps forward and one step back, and we can look toward seeing this moment in history as the beginning of the end of the Arab-Israeli conflict.”

Dermer acknowledged that while peace with the Arab world might not bring about a solution to the Israeli-Palestinian conflict, “it definitely weakens those who reject any kind of compromise or any peace with Israel.”

He maintained that the recent normalization agreements did not come as a surprise to Netanyahu and his team. “We have been talking about this for years,” he said. Dermer added that in “on-the-record and off-the-record” conversations held in Washington over the past few years, he has made the point that “there’s a possibility of real peace and reconciliation. We just have to sort of seize it. And we feel very fortunate that the Trump administration recognized this opportunity and took advantage of it.”

Reacting to a clip of John Kerry from 2016 that went viral this week, where the former secretary of state is emphatic that “there will be no separate peace between Israel and the Arab world” unless Israel first makes peace with the Palestinians, Dermer said this week’s event might have happened earlier “if there was greater understanding and recognition among policy-makers and if they understood the opportunity.” Netanyahu, he said, “was the lone voice, kind of in the wilderness,” talking about these opportunities.

“A lot of people said, ‘Well, he’s just talking about this because he doesn’t want to deal with the Palestinians,’” Dermer said. “Of course it was real.”

The Israeli ambassador was not shy about pointing out where he felt the Obama administration failed in its approach to bringing peace to the Middle East. There was this “theory” that creating daylight between the U.S. and Israel “will achieve results,” Dermer said.

In contrast, he noted, “these peace treaties are happening after the [Trump] administration recognized Jerusalem as our capital, after they recognized Israel’s sovereignty over the Golan Heights, after they put forward a peace plan that Israel can live with. And in each one of those steps, people said: ‘This is going to destroy any possibility of having any peace with anybody. It’s going to be a disaster.’ It’s not true. And I think the Trump administration, by doing what they have done, has helped strengthen Israel and anchored our legitimacy in the region.”

Dermer clarified that he was not suggesting “that this was possible two decades ago. I don’t believe that it was possible a decade ago. But I think that in the last few years, this thing has been the right thing that has been ready to happen,” he added. “I think the chances of ultimately seeing an Israeli-Palestinian peace are much greater. I can’t tell you whether they will cross that Rubicon, but it makes it greater.”

Dermer predicted that by the time he leaves his diplomatic posting in January, Israel will have signed “at least two more peace treaties” with Arab countries.

One of the main concessions Netanyahu made in the deal with the UAE was freezing the annexation of portions of the West Bank. UAE Foreign Minister Sheikh Abdullah bin Zayed pointed to that decision in his remarks at the White House on Tuesday. “Your excellency, Prime Minister Benjamin Netanyahu… Thank you for choosing peace, and for halting the annexation of Palestinian territories,” said Zayed.

Dermer, however, doesn’t see the delay as a concession made to the Arab world, but rather a compromise with the Trump administration. “We are not uprooting people from their homes like what happened with the disengagement from Gaza,” Dermer maintained. “We are not [prohibiting] Jews from building in their historic homeland. And what we said from the beginning, when it came to the [peace] plan and all the important elements that are in the plan, that we were going to move ahead and apply Israeli sovereignty to territories that the Trump peace plan designates as being part of Israel.”

The second part of that equation, Dermer continued, “is that we are not going to apply sovereignty to the territories that the Trump plan designated for a future Palestinian state, if they ever would deign to negotiate with the State of Israel.” He pointed out that Israel “said from the beginning that we were only going to go ahead with this plan with the support of the United States.” And once the Trump administration came up with the UAE plan, Dermer said, the dilemma for Netanyahu was: “Do I go ahead against the wishes of the United States, without U.S. support and sort of barrel ahead, or do I seize this historic opportunity, stand with the United States, get a peace treaty with the Emirates and get another and another and another — and actually, hopefully begin to end the Arab-Israeli conflict.”

“I think he made the right decision for the good of the country,” Dermer said of Netanyahu’s concession.

While the deals were touted as a foreign policy achievement for the Trump administration and a possible boost for his reelection, Dermer insisted the initiatives have bipartisan support. He attributed the rather subdued praise from Democratic lawmakers to the political calendar, with less than two months to go until the presidential election. Dermer said in conversations with about “three dozen senior members of Congress” — Republicans and Democrats — that they were all “really supportive” of the deal. “Washington has been a very politicized environment for probably about three decades,” he explained. “And in the weeks and months before an election, it is heightened — that politicization. So everybody sees everything through that lens. But I was heartened to hear very strong support across the board, across the aisle.”

Dermer pointed out that Democratic presidential nominee Joe Biden and his running mate, Sen. Kamala Harris (D-CA), also expressed their backing. “I hope that that success will speak for itself, and I hope a successful policy that has led to this breakthrough will be continued no matter who the American people entrust with being the next administration,” he said.

If you ask Dermer for the highlight of his tenure in D.C., the Israeli ambassador is quick to cite Netanyahu’s March 2015 address to a joint session of Congress, where the Israeli premier railed against the Iran nuclear deal. The speech — hatched by Dermer and then House Speaker John Boehner — was heavily criticized by Democrats and is often referred to as a turning point in the approach Democrats have towards Israel. But five years later, Dermer is adamant that his boss’s speech was “one of the critical moments that most contributed to this breakthrough” with the Gulf countries.

Dermer said he “feels just as strongly” about it now, “even stronger than I did then,” given the revelations about Iran’s nuclear program. “It was never about politics,” he said. Dermer recalls telling an interviewer at the time that he hopes “that in 10 years from now or 20 years from now, people will talk about a breach of protocol in a speech because then I’ll know that Iran never developed nuclear weapons.”

Despite the tensions over the speech, Dermer said he’s hopeful that “the strong forces” within the Democratic Party and voices “that are big advocates for Israel and big supporters of the U.S.-Israel relationship will continue to keep it extremely strong.”

Dermer plans to depart Washington on January 20, 2021 — the day of the presidential inauguration. Israel’s newly-appointed Ambassador to the U.N. Gilad Erdan is expected to succeed him in Washington the next day.

“I feel that the U.S.-Israel relationship is in a better place than when I took over, and I’m sure that my successor will bring it to the next level, because we are on this tremendous trajectory, and I’m sure he’ll do a terrific job,” Dermer said of Erdan.

As of now, Dermer said he does not know what his future career plans are. At least, that’s all he was willing to share with JI. “Really, I don’t have any idea what I’m going to do next,” Dermer said. “What I want to do is go home with my family — to our house in Baka, Jerusalem. Maybe take a day off or two, maybe to get some sleep. The honest truth is I don’t know. I haven’t focused five minutes on what I’m going to do next.”