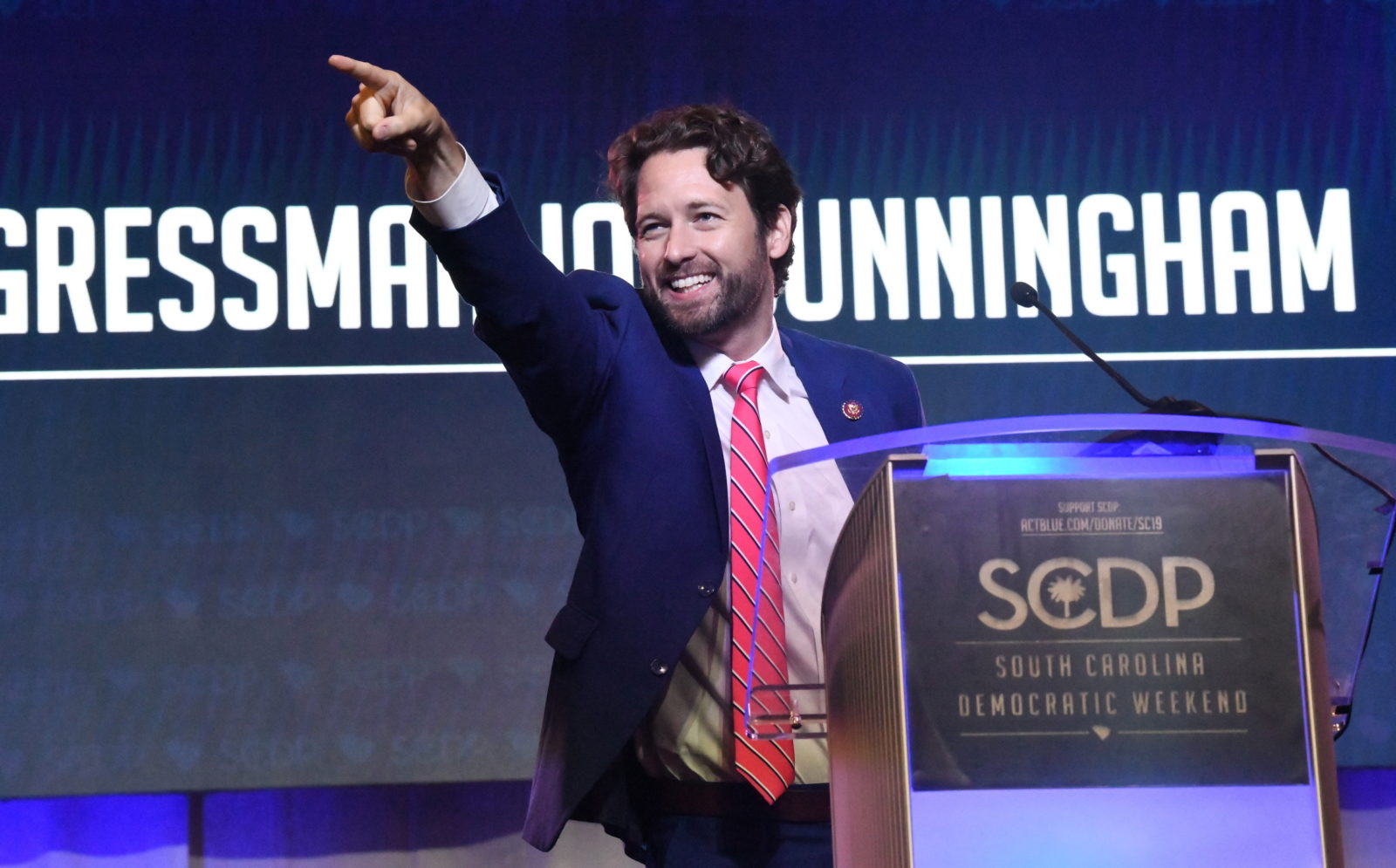 Over the past two years, Rep. Joe Cunningham (D-SC) has established himself as an amiable presence in South Carolina’s 1st congressional district, a long stretch of coastline which includes Charleston. The freshman Democrat, who bested his Republican opponent by just 1.4 points last cycle, is known for his campaign brewery tours, self-deprecating ads and disarming Southern drawl.

“He’s able to laugh at himself,” said Rabbi Yossi Refson of Chabad of Charleston, who has gotten to know Cunningham, in part, during the congressman’s occasional Friday visits to pick up challah for the weekend. “It’s incredible,” Cunningham says of the bread. “A nice little way to end the week.”

Cunningham’s cool demeanor, however, may belie a more pressing issue for the 38-year-old lawyer-turned-politician, who represents a historically conservative district in the ruby-red Palmetto State. His path to victory in 2018 was somewhat fortuitous: In the Republican primary, far-right candidate Katie Arrington unseated incumbent Rep. Mark Sanford in an upset, clearing the way for Cunningham, a moderate Democrat, to succeed in the general election.

But as he prepares for November, Cunningham is going up against a Republican opponent who, experts believe, represents a genuine threat to Cunningham’s hopes for a second term: Nancy Mace, a member of the South Carolina House of Representatives and the first woman to graduate from the Citadel, the state’s prestigious military college.

Though Cunningham has outraised Mace by more than $2 million — having pulled in $4.3 million, according to the latest filings from the Federal Election Commission — he is still on the defensive heading into November, according to Gibbs Knotts, a political scientist at the College of Charleston who has closely followed the race. “I think it’s a real toss-up,” Knotts observed.

Robert Oldendick, a professor of political science at the University of South Carolina, seconded that assessment. “Cunningham faces an uphill battle to retain his seat,” Oldendick said. “During his two years he has had to walk a fine line as a Democrat in a normally Republican district. And Nancy Mace is a formidable candidate. If the election were held today, I believe that Mace would win.”

Mace, who is 42, sees herself as a strong contender to defeat Cunningham, pointing out that she won her four-way primary outright by more than 31 points. “We were able to unite folks across the party and bring them together this time,” she told Jewish Insider in a recent interview, adding her belief that, given the dynamics of the last cycle, Republicans lost the seat more than Cunningham won it. “I feel good about our prospects,” she said.

“Even though I’m Republican, I know I’ve been a strong independent voice in matters that are important to the constituencies or the residents of South Carolina’s low country,” Mace said, “and I feel like I will better represent this community rather than someone who’s so entirely partisan.”

Mace may be in a good position to give her opponent a scare — the district is drawn to favor Republicans — but her critique isn’t entirely warranted. Cunningham has made consistent efforts throughout his tenure in Congress to cast himself as an independent thinker who is willing to buck Democratic orthodoxy.

As a member of the centrist Blue Dog Coalition, Cunningham touts his moderate bona fides in making the case for why voters should elect him to a second term, telling JI that he votes according to policy and not party.

“What I’m most proud of is our record of bipartisanship,” Cunningham told JI, referencing his co-sponsorship of the Great American Outdoors Act as well as his introduction of a bill to ban offshore drilling. “I think that’s something that not only this country craves, but this district craves, especially in such divided times with a divided government.”

Though both candidates stress their heterodox approaches, their views mostly fall neatly along party lines on matters of foreign policy. Cunningham, for his part, supports rejoining the Iran nuclear deal, which President Donald Trump abandoned in 2018.

“That deal was by no means perfect,” Cunningham said. “It failed to address Iran’s destabilizing influence in the region, their funding of terrorism and all their human rights abuses. But it was successful in restricting Iran’s development of a nuclear program,” Cunningham said. “If we reenter the deal, it should be done with strict controls in place to ensure that Iran does not skirt the nonproliferation provisions of the deal and must address Iran’s nuclear ballistic missile program. Iran should be treated as a hostile foreign power, but when the U.S. reneges on its international commitments, I think it hurts our standing throughout the world.”

Still, while Cunningham was critical of some aspects of the president’s foreign policy, he praised the Trump administration’s work in helping to establish the normalization of diplomatic relations between Israel and the United Arab Emirates.

“The agreement by the United Arab Emirates and Israel to establish diplomatic ties, I think, is incredibly historic and is an important step toward a more peaceful, stable Middle East,” Cunningham said. “I applaud the president and his administration for the role that they played in achieving it. This deal is also going to stop further Israeli annexation in the West Bank, which has been a key sticking point between the Israelis and Palestinians and pushed the chances of a two-state solution further out of reach.”

“I strongly support the long standing policy of the United States to work towards a two-state solution through direct negotiations between the Israeli government and representatives of the Palestinian people who want to peacefully coexist with Israel as a neighbor,” Cunningham added.

Mace positioned herself as an unequivocal supporter of Trump’s policies in the region. “I support the president on his positions on the Middle East just about in every way right now,” she said. “The Iran nuclear deal was preposterous — and as it is, I think, irrelevant now. It’s not smart to trust Iran. We should have learned that lesson many years ago. This is a country whose leadership claims ‘down with America’ and antagonizes our closest ally in the region, and we are an ally of Israel, and we should be. We should be supporting them. But I’m going to vehemently oppose any measure that lessens the pressure on Iran or ignores its hostile intentions.”

Neither Cunningham nor Mace has been to Israel, though they both expressed strong interest in visiting.

Both candidates also raised concerns about the uptick in antisemitism throughout the United States.

“I’m concerned about the general rising of antisemitism in this country,” said Cunningham, noting that the recent vandalism of a Holocaust memorial in Charleston was “horrifying and completely unacceptable.”

He added: “It’s clear that antisemitism is on the rise throughout the country. And, it’s important to note, this doesn’t just affect the Jewish community — it permeates the society and impacts all of us.”

Cunningham said he has built a strong relationship with Jewish constituents in his district, home to one of the oldest Jewish communities in the country. “I think folks here, especially the rabbis, have an understanding that my door’s always open,” he said. “Our interests are aligned here.”

Mace was equally firm in addressing antisemitism. “I am disheartened that this is even still an issue that we have to discuss in 2020, but apparently, it still is,” she said, adding: “We’ve got to prevent these kinds of attacks before they happen. We’ve got to educate our youth on the long history of this terrible hatred that, for some reason, is happening. We’ve got to ensure the Holocaust is not minimized and, worse, not forgotten.”

“There are just so many consequential issues and policies that are going to be decided in November,” Mace told JI.

Though she may have an advantage given the history of the district, the pandemic has scrambled the dynamic, upending traditional campaigning. On top of that, both candidates contracted coronavirus earlier this year — Cunningham in late March and Mace in late June — adding an additional impediment.

While Cunningham seems to have fully recovered from a mild case, Mace said she is still suffering from the virus’s after-effects, which have slowed her down on the trail.

“There are lingering symptoms,” she said. “I do get fatigued from time to time, and I sort of joke that I’m operating at 185% instead of 200%. But when you’re a person who’s very active, who exercises every single day, is always on the go — when you feel that kind of fatigue, it’s very concerning if you want to feel like your normal self.”

Not that she seems to be reserving any of her energy. “No one’s going to work harder than I will to represent this district — these are serious issues that we’re tackling, and it’s more than about beer and puppies,” she said, making what appeared to be a sideways jab at some of her opponent’s whimsical campaign and advertising messages.

Still, Cunningham made clear that, despite his playful side, the issues of concern to those in his district were no laughing matter.

“My main focus has been, and always will be, delivering results for the people of the Lowcountry,” he said. “Our office has helped literally hundreds of constituents with their unemployment benefits and recovering stimulus checks and everything else that can be done from the federal level. We’re just proud to be continuing to be delivering results.”