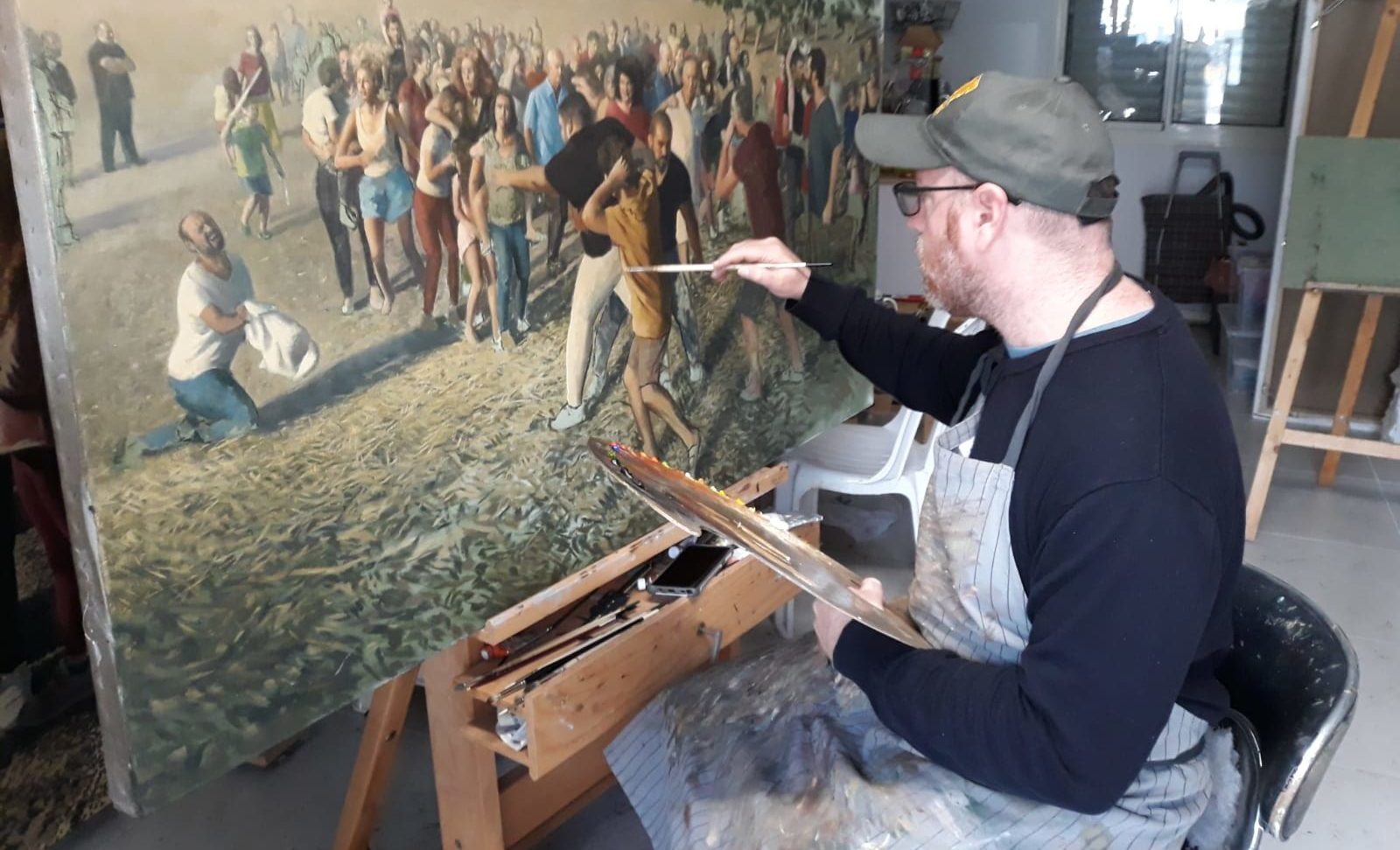 Matan Ben Cnaan has been working on his latest painting for more than a year. But the idea for the enormous artwork, which is still a few months from completion, has been germinating in his mind since he was just 6 years old.

That painting, “The Bureaucrat,” is centered on an average-looking man, clad in casual clothing and grasping a clipboard. Men stand on one side of him, while women and children are gathered on the other side, with varying expressions of fear, anger, confusion and contempt.

The deceptively calm scene on the towering canvas is intended to echo the selection process at a Nazi concentration camp. Ben Cnaan was a young child when he first saw the Polish passport of his great-grandmother, complete with the stamp that granted her passage to leave and escape the impending Holocaust.

“I still remember vividly the insight I had back then as to the power bureaucracy has on people’s destiny,” Ben Cnaan told Jewish Insider. “I have been carrying this thought at the back of my mind” since then, he said. Rather than depict “The Bureaucrat” — the man who decides who lives and who dies — as a “cold-hearted villain,” Ben Cnaan reimagines him as “a coward,” who is “looking down in shame.”

Despite first imagining this scene “really, literally, when I was 6 years old,” Ben Cnaan said he waited until a point in his career when he finally felt ready to tackle it. “It took me almost 30 years to execute it.”

For Ben Cnaan, 40, his work begins long before he touches brush to canvas.

“It starts with a vague idea I have in my mind — a vision,” he said in a recent Zoom interview with JI from his studio in Ramat Yishai, in Israel’s north. Once the idea is fully formed, he recruits models to pose for photographs, finding “people who fit the mental picture I have in my mind. It usually takes a lot of time to find” the right people and coach them into producing the image he envisions.

After taking more than 1,000 photos of the scene, Ben Cnaan spends “days, weeks or even a month” preparing a composite reference image in Photoshop. “Then starts the real fun work — to paint it,” he said. “Not the easy part, but the fun part.”

But it is important to Ben Cnaan that people understand the intent behind his process.

“It’s not about copying the photo,” he said. “It’s about how to reveal my initial vision — that got richer by being able to forge a photo that somehow echoes what I had in my mind.”

Ben Cnaan was born and raised in Israel, and attended Oranim Academic College before receiving a masters in fine arts from the University of Haifa. Amid teaching art lessons and accepting private commissions, he built up his portfolio, painting lifelike scenes imbued with layers of meaning.

His work has often drawn heavily on biblical tales and themes, reinterpreting them through a modern lens. His 2007 painting, “Yael and Sisra,” depicts the story from Judges where Yael kills Sisra, the commander of the Canaanite army, by driving a tent peg through his head as he sleeps. In 2009, Ben Cnaan painted “Batsheva and Uriah,” a modern-day retelling of the story in which King David sent Uriah to the front lines of battle, hoping he would be killed, leaving Uriah’s wife, Batsheva, free to marry him. In Ben Cnaan’s depiction, Batsheva is in a hoodie and jeans, while Uriah wears an IDF uniform.

“I find them so relevant to our days nowadays, in terms of human relationships,” Ben Cnaan said of the biblical stories that inform much of his work. “In order to be able to touch on our era, and our days, I have to get far away from it… I’m not trying to take the biblical story and [make] it look like it was back then. It’s about now. But the stories allow me to build this scene in my mind — they’re the trigger.”

In 2015, his painting “Annabelle and Guy” won the prestigious BP Portrait Award from the National Portrait Gallery in London, widely considered the most important prize in the portrait world. The work depicts the tragic biblical tale of Jephthah, who arrives home after winning a battle and vows to sacrifice whatever emerges first from his house as a thanksgiving. He is devastated when his daughter, his only child, comes out to greet him — but she steadfastly urges him to fulfill his vow nevertheless.

Ben Cnaan’s painting — whose name was changed before submitting it to the anonymous competition — was selected from among 2,748 submissions, making him the first and only Israeli to ever win the illustrious prize.

“I was shocked to even participate, not to mention being shortlisted,” Ben Cnaan said. So even five years later, he added, “I can’t fully understand” the fact that he took home the top prize.

“We are painters, it’s not like we are a football team or a basketball team,” he said. “It’s not like our country is so supportive of us… but it still brings a lot of honor to [Israeli] people.”

The win provided a major boost to Ben Cnaan’s career, bringing him attention, name recognition and a significant influx of private commissions.

“It allowed me to meet amazing people, who I still have relationships with, and new collectors, important collectors,” as well as smoothing the way to private shows at museums in Israel, he said. “It’s like throwing a stone into a river, you can still feel the effects.”

While he has been working on “The Bureaucrat” for more than a year, Ben Cnaan took breaks throughout to paint commissioned artworks of individuals and families in order to pay the bills.

“I need to pay my mortgage,” he said bluntly, “even though it’s not doing what I want — it’s a commission, you need to satisfy the buyer.” Still, these days, in particular since his 2015 award, he can turn down opportunities that don’t feel right — including painting pet portraits.

“I can’t take a commission as if I am like a carpenter making a table,” he said. “I have to find some kind of relation or click with what I’m painting.”

Today, he works every day in his studio in Ramat Yishai, a small town in the Jezreel Valley which is a short drive from his home in Haifa. While Israel’s art scene is undoubtedly centered in Tel Aviv, Ben Cnaan thrives in the quieter, more peaceful pace of life up north.

“Tel Aviv is OK for me just to visit,” he said. And any thought of living abroad, he added, would too deeply affect his work. “My uniqueness, my paintings, are derived from the fact that I’m here in Israel, in my life here, the character — [there’s] something here, local, that can connect all over the globe.”

It has taken decades for the world of figurative and realistic art to become more respected in the larger art world, particularly in Israel, Ben Cnaan said.

“My teachers, when they were my age, there wasn’t a place for them in the art world,” he said. “Nowadays it has changed, and we do have our place of honor — but maybe not as much as other branches of painting.”

While the average exhibit attendee might imagine that it is a compliment to say his artwork looks just like a photo, Ben Cnaan says that has the opposite effect.

“Usually I would be offended” if someone said that, he said. “It took me a long time to understand that people… mean it as a compliment.”

While the goal is to create a realistic-looking image, “we are talking about colors and brushes and pictorial language.” From far away, he said, his work may look like a photo, but up close you can both see and feel the texture of the painting.

“This is the magic, the duality,” he said. “It’s just a painting, but it somehow reflects life.”