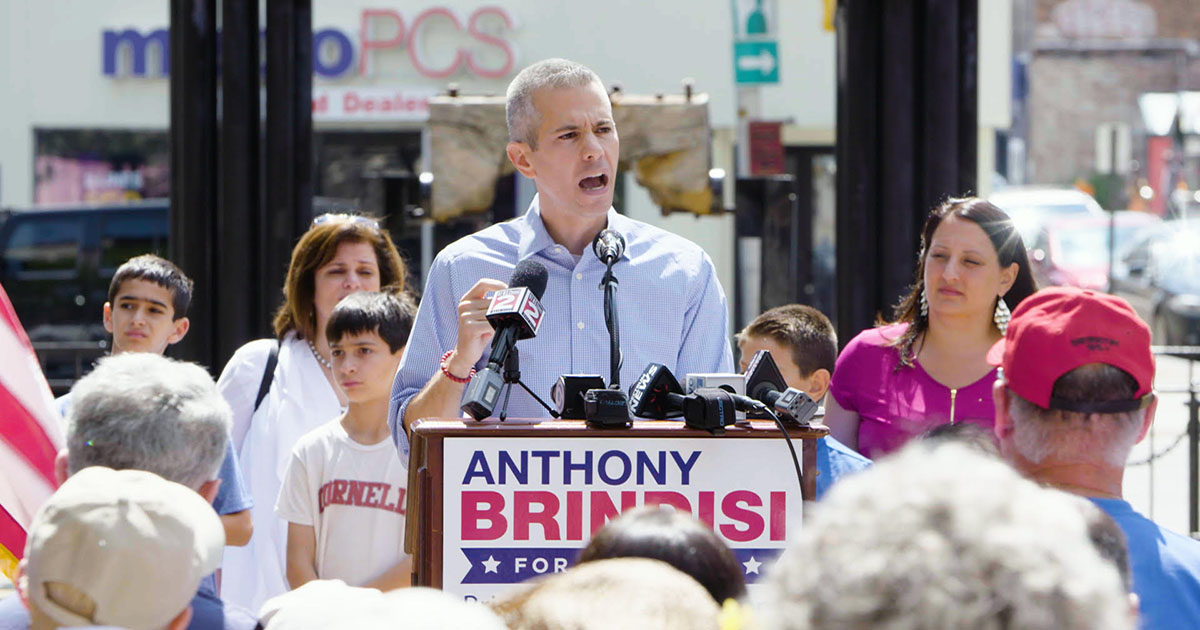 Rep. Anthony Brindisi is facing a tough challenge against the congresswoman he unseated two years ago

For Rep. Anthony Brindisi (D-NY), the hardest part of his job is leaving his family behind at the beginning of each week to head to Washington. But as a public servant, the father of two has found a way to ease those departures. On the flight from New York to Washington, D.C., Brindisi — who has represented New York’s 22nd congressional district since 2019 — writes a note to his 13-year-old son and 9- year-old daughter about why he’s going to Congress that week.

“Hopefully, they can look back at that later on and understand that daddy was trying to make the world a better place,” the first-term congressman told Jewish Insider in a recent interview, “and that’s why he had to go to Washington every week.”

For Brindisi, 41, the notes don’t just add up to a collection that his kids will have to look at later in life, but also for himself, as a lawmaker, to “document and remember all the things that have been happening this last year and a half.”

Born and raised in Utica, New York, Brindisi earned his law degree from Albany Law School after graduating from Siena College. After graduation, he joined the law firm founded by his father, Brindisi, Murad, Brindisi & Pearlman. In 2011, he ran for a State Assembly seat, succeeding former Assemblywoman RoAnn Destito (D) in a special election to represent Oneida County.

In 2018, encouraged by Senate Minority Leader Chuck Schumer (D-NY), Brindisi ran for Congress and beat first-term Rep. Claudia Tenney (R-NY) by less than 2 percentage points. Now, the roles are flipped: Tenney is challenging Brindisi in November, hoping to take back the seat she lost.

“It has been a crazy time and an exciting first year and a half,” Brindisi said of his time in Washington. “There’s been so many history-making moments that have happened since 2018, and it’s interesting to have a front row seat to all of them.”

The 22nd district is considered a toss-up, according to The Cook Political Report. In 2016, President Donald Trump won the district by more than 15 points and it remains a top target for the GOP.

Brindisi co-chairs the whip role for the Blue Dog Coalition, a group of Democratic lawmakers who identify as fiscally responsible, and is a member of the Problem Solvers Caucus, which is made up of Democrats and Republicans looking for bipartisan solutions to Washington’s biggest challenges.

Brindisi boasts about being one of the few freshman members of Congress who has had four pieces of legislation signed by President Donald Trump, among them bills on veteran affairs and health care matters. “It was not an easy thing to do, especially when you’re in divided government right now,” he told JI. “But I believe in bipartisanship and trying to solve problems.”

Working in a bipartisan manner “has really been my recipe for success,” Brindisi said. “I spent a lot of time trying to build relationships with other members of Congress on both sides of the aisle. And when you take the time to listen to other members, sometimes you can find consensus and then work together to solve a problem.”

Brindisi believes this approach is greatly appreciated by his constituents. “The one thing I hear over and over again from constituents is, ‘We don’t care if you’re a Democrat or Republican. We just want you getting things done.’ And that’s what I focused on in my first couple of years, in addition to being visible in the district,” he stressed.

At the age of four, Brindisi lost his mother after a protracted battle with cancer. Brindisi told JI that his three older sisters, who he credits with raising him, instilled in him the values that he feels guide his work as a public servant.

“One of the lessons that always stuck out was, don’t be a bystander. When you see something wrong, you have to do something about it,” Brindisi said, adding that those words “were in the back of my head” when he first ran for Congress. “I didn’t like seeing what was happening in Washington and people not working together to solve big problems. I guess I could have sat back and stayed in the state legislature, but I decided to run for Congress in a seat that traditionally isn’t held by Democrats to do something to change that.”

“I’ve always enjoyed public service,” Brindisi continued. “It has its moments — it definitely has its ups and downs. But when you can help a constituent who’s trying to get health insurance or if you can pass substantive legislation that’s going to improve the lives of people in your district and across the country, to me, it makes up any of the low points.”

Victor Pearlman, executive director at the Jewish Community Federation of the Mohawk Valley, is married to Brindisi’s older sister Eva. “[Anthony] is an amazing young man with an innate ability who understood my Jewish upbringing and my values like I don’t even think many Jews could understand,” Pearlman told JI in a phone interview. “He has participated in Passover Seders, he has come to shul to read passages at my children’s bar and bat mitzvahs.”

Brindisi first visited Israel in 2016 on a delegation of New York assembly members. He described the trip as “remarkable” and said it had a significant impact on how he views the U.S.-Israel relationship as a member of Congress. “I think being able to see firsthand the strong bond between our two countries and the shared values was important and has helped shape and strengthen my view of why we need to support our ally Israel and maintain a strong bond between our two countries,” Brindisi said.

Pearlman told JI that following his brother-in-law’s trip to Israel, “one of the first things he said to me was, ‘I felt like I was in America, and I didn’t expect that because I was in the Middle East.’ And all I said to him was, ‘I told you so.’”

The New York Democrat supported Trump’s decision to move the U.S. Embassy from Tel Aviv to Jerusalem and the U.S. withdrawal from the 2015 nuclear deal with Iran. Brindisi was also one of 12 House Democrats who broke party ranks last year to vote in favor of a Republican motion to recommit on anti-BDS legislation that would allow state and local governments to adopt laws to divest public funds from entities that boycott Israel.

But Brindisi maintained that his record on Israel is “more in line with the long-standing principles” of the Democratic Party.

“Although there are those in my party that may not feel as strongly as I do about the relationship between the U.S. and Israel, to me, supporting Israel should not be a partisan issue,” he stressed. “It is a relationship that has existed for several decades, and we need to maintain that strong, unbreakable bond for the future.”

Brindisi is one of almost two dozen Democrats who didn’t sign onto House letters publicly expressing opposition to potential Israeli annexation of parts of the West Bank. A House letter sent to Israeli leaders, signed by 191 House Democrats and backed by House Speaker Nancy Pelosi, warned that annexation would undermine the two-state solution. Another letter, signed by 12 progressive members and addressed to Secretary of State Mike Pompeo, threatened to condition aid to Israel over annexation.

Brindisi told JI he did not sign onto the more mainstream letter against annexation because it didn’t strongly oppose conditioning military aid to Israel.  “My concern with the letter is that I believe it’s important that we reiterate and make it very clear that it’s in America’s national security interests to maintain our commitment to security assistance to Israel without conditions,” he said. “That’s a red line for me.”

Brindisi added that he has “concerns” with the prospect of unilateral annexation of territory in the West Bank because he favors direct negotiations between the parties. “What is most important to me is the long-standing permanent relationship between our two countries,” he said. “The security aid that we provide is not symbolic. In my mind, it saves lives, and we need to reiterate that commitment to make sure that it’s clear.”

Pearlman told JI, “I like to hope that part of his love of Jews and Israel might have been slightly influenced by me. I can say to my Jewish friends: You won’t find a better supporter of Israel [than Brindisi].”

Brindisi is confident that he will win a second term in November, but acknowledged that it’s “going to be a tough race” given the challenge posed by the GOP in a presidential year. “But I feel that people in the district, by and large, don’t want to turn back the clock. They want to continue the progress we’ve made.”

And it’s his accomplishments as a freshman that Brindisi wants voters to judge him on, drawing a clear contrast with the more progressive wing of his party. “There’s a lot of members that prefer to make noise on social media, but don’t accomplish a whole lot when they come to Washington,” Brindisi told JI. “My goal is to deliver results for the people that elected me, and that means sometimes working quietly behind the scenes.”