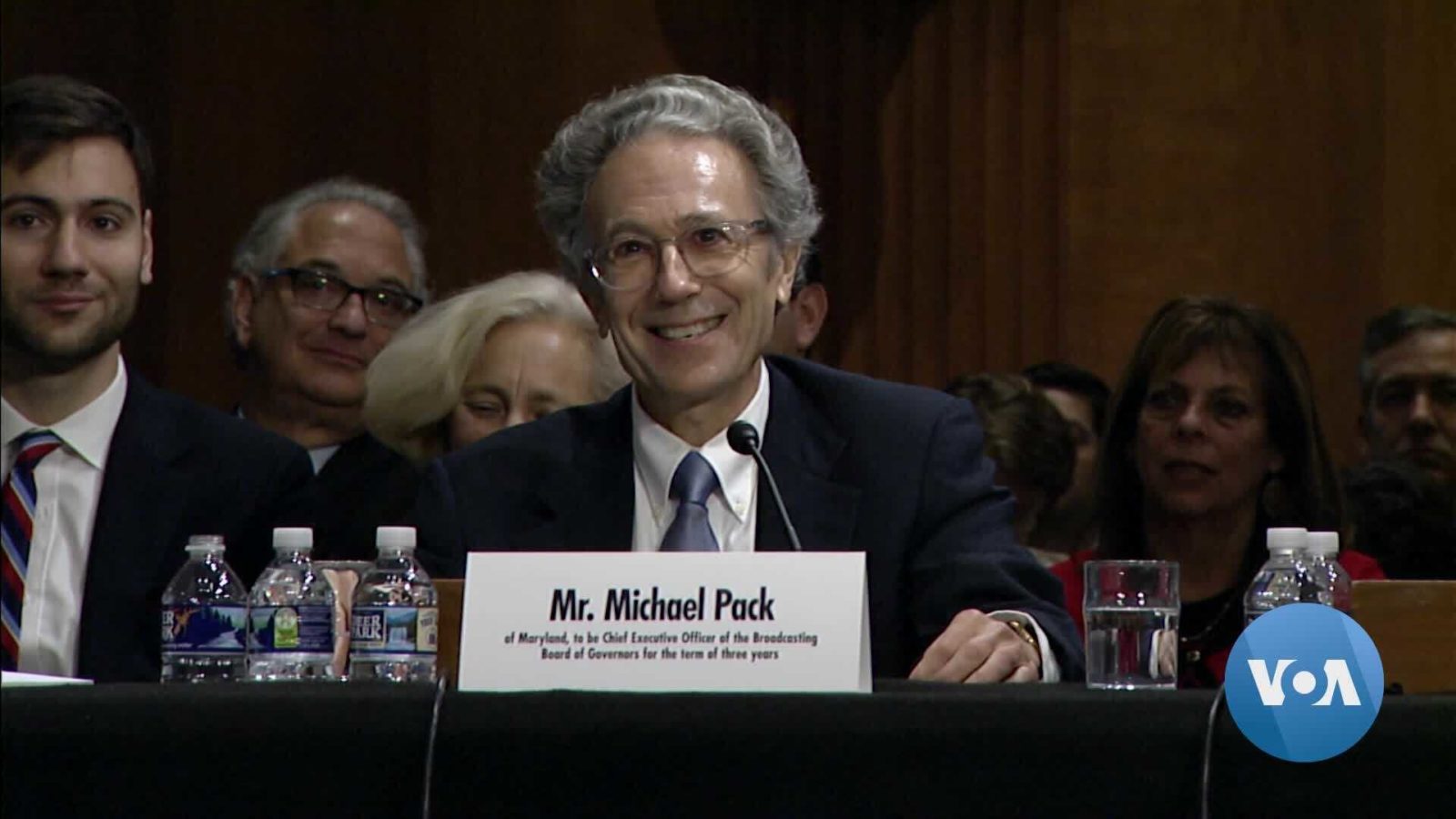 In a rare interview, Michael Pack addresses the litany of criticism he has faced since assuming office in June

Like many other office buildings across the country, the headquarters of the U.S. Agency for Global Media are nearly deserted. The sprawling newsrooms of Voice of America, one of the news agencies under the USAGM umbrella, lie empty and dark. Footsteps from the building’s few occupants echo off the chipped, off-white walls down the empty hallways.

But one corner of the building is buzzing with activity — the office suite housing recently confirmed USAGM CEO Michael Pack and the agency’s other senior leadership.

When Jewish Insider visited USAGM’s executive suite at the end of July, officials were flitting between offices and making harried phone calls preparing to announce an investigation into a video on VOA Urdu’s social media that Pack saw as overly positive toward Democratic presidential nominee Joe Biden.

That investigation fits into what Pack said is his broader agenda for USAGM.

“My goal is simply to bring the agency back more closely into correspondence with its mission and to make sure it fulfills its core mission,” Pack told JI in a rare interview, explaining that he believes the agency has fallen short in fulfilling all areas of its core duties.

“They do present a lot of news, but they need to work on the balanced and objective part,” Pack said. “They’re required to present American ideas and institutions, essentially tell America’s story to the world. I think we need to do a much more forceful job of that,” he added. “They are to present the administration’s position along with thoughtful criticism of it… And I think we could do better with that too.”

Before joining USAGM, Pack served as CEO of the Claremont Institute, a conservative think tank. Since President Donald Trump nominated Pack to lead USAGM in 2018, skeptics on both sides of the aisle have raised concerns that, at the president’s direction, he would seek to politicize its editorially independent news organizations and turn them into a megaphone for the president — an accusation Pack categorically denies.

“I say this all the time, the credibility of the agency depends on believing that the journalists are objective, and I would not interfere with what journalists on the ground want to say about the countries they’re reporting about and to,” he said. “I don’t want to destroy this agency. Why would I want to do that? I worked here before, I believe in the mission.”

Pack’s trajectory to becoming a Trump administration official is perhaps unlikely given his upbringing. But he grew up fascinated by an evolving media landscape and honed his film skills before entering government service under President George W. Bush.

He was born into, as he describes it, a family of “liberal, Upper West Side Jewish New Yorkers for a couple of generations.”

“I grew up in that political milieu,” he said. “It affected my interest in film, interest in media, interest in ideas. It’s hard to really pin down exactly what part of that is Jewish and what isn’t. But it’s part of I think, this sort of Jewish, New York intellectual environment. I think I sort of do come from that.”

Pack attended Yale College, the University of California, Berkeley, and New York University. He went on to found Manifold Productions, a documentary film production company through which Pack has written, directed and produced around a dozen films, nearly all of which were broadcast on PBS.

The films cover a variety of topics, including culture, religion, politics and history. Manifold’s most recent release, “Created Equal: Clarence Thomas in his Own Words,” features interviews with the controversial associate justice and his wife.

Some of Pack’s films have also touched on topics relating to Judaism. His 1995 documentary “Hollywood vs. Religion” focuses on conflicts between the entertainment industry and organized religion, including Judaism. One of his most recent productions, “Rickover: The Birth of Nuclear Power” highlighted the career of Navy Admiral Hyman Rickover, and touches briefly on Rickover’s childhood as a Jewish immigrant who escaped pogroms in Poland.

Two of Pack’s films — “Rickover” and the upcoming “The Last 600 Meters,” about the Iraq War — were co-produced by former Trump White House chief strategist and Breitbart News chairman Steve Bannon, though Pack maintains Bannon only served in a consultant role.

Bannon has been highly critical of VOA, and reportedly pushed Trump to assert more control over the agency.

“[Pack’s] my guy, and I pushed him hard” during the nominating process, Bannon told The Washington Post. Bannon also lauded Pack for a series of high-level firings, saying he had “accomplished in one day what people have been trying to do for 15 years.”

But Pack, who described Bannon as a “friend,” downplayed their relationship. “I haven’t seen him in person since he left the White House,” Pack explained to JI. “He’s not a close friend, but he’s in the group of people I know.”

Pack also had several prior government stints, serving on the National Council on the Humanities from 2002 to 2005, and then as senior vice president for television programming at the Corporation for Public Broadcasting from 2003 to 2006. Pack was also previously the Director of WORLDNET, a U.S. government satellite network which has since been incorporated into VOA.

“I think it was very useful to have had some experience in government,” he said. “Government works very differently from the private sector.”

At CPB, Pack noted, “there was a similar need to uphold journalistic standards, and I think I’m pretty comfortable holding people to that.”

During Pack’s nomination process, senators in both parties actively sought to block his appointment and restrict his influence. Former Senate Foreign Relations Committee Chair Sen. Bob Corker (R-TN) introduced a bill at the end of 2018 seeking to limit Pack’s power as CEO and prevent him from firing some Obama-era holdovers.

Pack’s nomination languished in the Senate for almost two years — in part because of concerns that he allegedly funneled more than $1 million from a nonprofit he ran into his production company, which the D.C. attorney general is now investigating — until he was confirmed in early June.

In the meantime, frustrations mounted with the agency, and VOA in particular, among senior administration officials, including the president — who called VOA “disgusting” at a press briefing. A White House statement accused VOA of promoting Chinese government “propaganda.”

Pack said White House officials, including the president, hope he can fix the objectivity issues they perceive at USAGM.

“I feel that they want me to, as one person in the White House put it at one point, bring [the agency] back to its glory days, meaning during the Cold War,” Pack told JI. “You’d never find anybody at… any of the networks who would deny that it should not be biased. Everyone knows what the missions of these organizations are, but that doesn’t stop it. Still, there’s the temptation to stray from the mission.”

Upon taking office, Pack set off alarm bells on both sides of the aisle in Congress by dismissing the heads of the RFE/RL, RFA, MBN and the Office of Cuba Broadcasting. The top two officials at VOA and the head of the OTF resigned after Pack was confirmed.

“The termination of qualified, expert staff and network heads for no specific reason as well as the removal of their boards raises questions about the preservation of these entities and their ability to implement their statutory missions now and in the future,” a letter from the senators read. “These actions, which came without any consultation with Congress, let alone notification, raise serious questions about the future of the U.S. Agency for Global Media (USAGM) under your leadership.”

Pack will be testifying before the House Foreign Affairs Committee in September. He insists his actions are routine, and denies that there is any cause for concern, noting that staffers on both sides of the aisle were let go in the layoffs.

“It wasn’t based on performance. It was based on the idea that we should have a fresh start,” he said. “And I assigned in almost all cases a very senior person who was [a] career [official] to be acting. So it’s sometimes portrayed in the media that somehow we eliminated these career people and brought in Trump politics — but that really isn’t the truth.”

But Pack’s critics were not assuaged by his explanation.

“Pack’s excuses don’t hold water, and the Senate must take action to protect USAGM from his political interference,” Sen. Chris Van Hollen (D-MD), one of the senators who signed the Foreign Relations Committee letter, said in a statement to JI.

When asked about reports that the agency appears to be preparing for another round of firings, Pack said “we are examining the agency from top to bottom,” and again emphasized, “it’s pretty typical that new people make personnel changes.”

He continued to raise eyebrows by hiring talk radio host Frank Wuco, who called former President Barack Obama “a Kenyan” and Speaker of the House Nancy Pelosi a “Nazi,” Politico reported. A USAGM spokesperson described Wuco as part of “an elite leadership team comprised of subject-matter experts as well as former members of the U.S. Armed Forces.”

In addition to heightened congressional and media scrutiny and the D.C. attorney general’s investigation, Pack has also had to contend with the unprecedented challenge of trying to take command of a federal agency with more than 3,000 employees in the midst of a global pandemic.

“People often give you the advice when you start a job like this, ‘Don’t stay walled up in your office. Go out and meet people.’” Pack said. “I go out and walk around the building all the time, but there is nobody there. They’re all home. So it makes it very hard to get a feel for the people who work with you.”