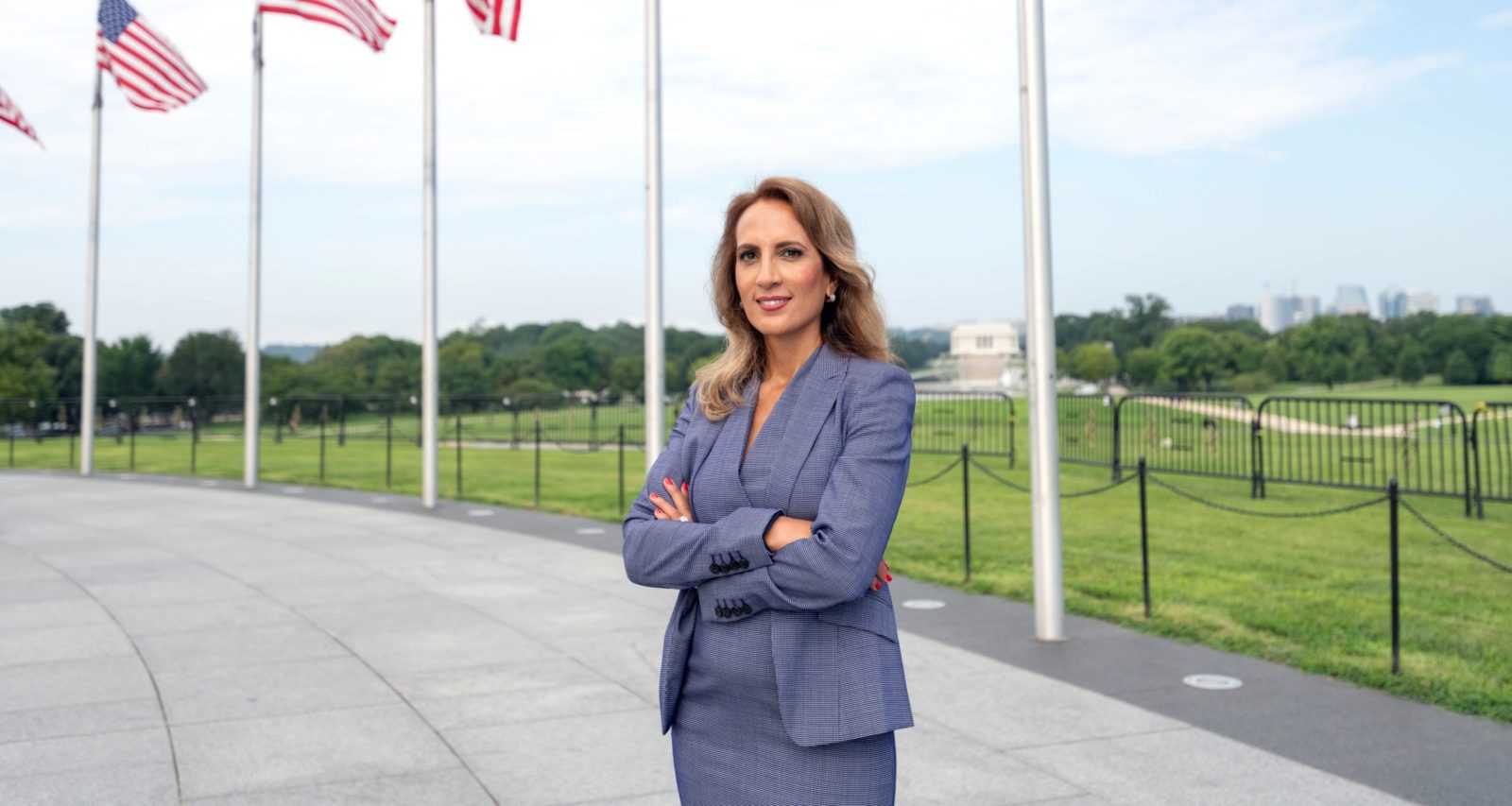 From Tehran to the Trump admin by way of Bais Yaakov

Ellie Cohanim, the assistant special envoy to monitor and combat antisemitism, believes she is living proof of the American dream

Ellie Cohanim arrived in New York at age 6 from Tehran, without speaking a word of English. More than four decades later, Cohanim now serves as the assistant special envoy to monitor and combat antisemitism in the State Department — a job she feels honored and privileged to hold.

“If I look at my life right now, I say the American dream is so very much alive and kicking,” Cohanim told Jewish Insider in a recent phone conversation. “A little girl can come to this country, not speak a word of English and one day be tapped to represent the United States government — and furthermore in the office to fight global antisemitism, as a Jew — it’s a calling. It’s a dream and a privilege to be able to fulfill this mandate that we’ve been given.”

Cohanim, 47, was appointed to the deputy position under Special Envoy for Monitoring and Combating Antisemitism Elan Carr in November. But within a few months of entering the job, the COVID-19 pandemic put a halt to much of Cohanim’s plans for her new role.

“We had trips that we had planned to the Gulf and to Latin America and all of that has kind of been put on hold,” she said. “The toughest part about COVID in terms of the work that we’re doing at the State Department is not being able to have face-to-face meetings — we’re calling it ‘Zoom diplomacy.’”

At the same time, she said, the coronavirus has led to “a tremendous rise, unfortunately, in antisemitism and so many conspiracy theories about Jews and Israel and the coronavirus creation and the spread. So we’ve been incredibly busy, and we’re doing everything we can despite all the obstacles.”

Though she was only a young child when her family fled Iran, Cohanim retains a handful of memories of the unrest leading up to the Iranian Revolution that began in 1978. Cohanim’s father, who had conducted business with Israel, was accused of being a Zionist spy and was threatened with being turned over to the authorities.

“We kind of just got up one day and left the country,” she recalled. “So my memory as a child is — one day I was in Iran, the next day I was on an airplane.” In the days and weeks leading up to their escape, Cohanim recalls “unrest and rioting and shooting in the streets.” That included an incident “where a bullet penetrated my cousin’s bedroom — and we went over to my uncle’s home and saw the bullet hole in the wall,” she said. “This is a memory that has stayed with me.”

By now all of her family has left Iran, Cohanim said, but she stressed that the office “is keeping a careful eye out on the Jewish community in Iran and truly everywhere in the world.”

When her family arrived in New York in 1979, Cohanim’s parents had little understanding of the American Jewish communal landscape. So they placed her in an all-girls ultra-Orthodox Bais Yaakov school — an institution that didn’t fully align with their traditional Sephardic practices.

“My exposure as a young Persian Iranian girl in a very Ashkenazi environment gave me this kind of broad understanding of Jewish history,” she said, which included teachers who were Holocaust survivors who spoke about their experiences.

She stayed enrolled in the school through 8th grade, at which point she transferred to a public high school. But she did leave Bais Yaakov with a few words of Yiddish and a strong appreciation for Jewish practice. “My parents were very amused by my Ashkenazi pronunciation of the Hebrew language,” she joked.

Cohanim, a graduate of Barnard College, was appointed to the State Department position, which does not require Senate confirmation, in November. Previously she served as a correspondent and the senior vice president at the Jewish Broadcasting Service TV network. Prior to that, she worked at Yeshiva University, the Jewish Theological Seminary and the UJA-Federation of New York.

But she didn’t hesitate to pick up and move to Washington from New York — where she has lived since arriving in the U.S. at age 6 — when she was tapped for her first-ever government position. “This is a privilege to be able to serve my country and to give back to this great nation that has given me such an incredible life as a woman, a Jew, an Iranian.”

Cohanim said the drive to prevent Iran from obtaining nuclear weapons is “one of the hallmarks of this administration’s fight to combat antisemitism.” The leaders of her homeland, she said, have an “obsessive hatred toward the Jewish state, where they daily call for the elimination of Israel, they deny the Holocaust ever took place, they fund Hezbollah and Hamas and the Houthis in Yemen; all of this activity is geared toward one thing — which is their genocidal fantasy with eliminating the Jewish State of Israel.”

In her role at the Office to Monitor and Combat Antisemitism, Cohanim is tasked with the portfolio covering the Middle East, North Africa and Latin America.

“Iran is a very big part of that focus,” she said. “Whether it’s highlighting their antisemitism [or] countering all the hate that they have produced in the world.”

The office’s main priorities, Cohanim said, are encouraging countries to adopt the International Holocaust Remembrance Alliance working definition of antisemitism; urging nations to appoint a government pointperson on antisemitism; pushing for countries to designate Hezbollah as a terrorist organization; countering institutionalized antisemitism in school textbooks; and ensuring the security of Jewish communities around the world.

Cohanim pointed to a series of recent successes, including Lithuania designating Hezbollah as a terrorist organization just last week; Spain adopting the IHRA definition last month; and Italy appointing a national coordinator on antisemitism earlier this year. But she stressed that these accomplishments are shared with a wide range of offices and actors in the State Department. “There’s almost nothing that any one office in the State Department can ever take as an exclusive win.”

She has focused specifically on countering institutionalized antisemitism, including antisemitic content distributed in mosques, through media outlets and included in educational materials.

“What you have in that region is children literally being brainwashed into hatred from a young age,” she said. “A lot of our effort has been in confronting those institutionalized forms of antisemitism in these societies.” It is more difficult, she said, to pinpoint successes in such areas. “These are conversations that we have all the time with our counterparts in foreign countries,” she added. “There’s definitely been progress, but I will tell you there’s still a lot of work ahead of us.”

Since the office is under the purview of the State Department, its focuses are entirely international, as opposed to domestic. But Cohanim believes the current administration is right on track when it comes to countering antisemitism at home. She firmly rejects charges that President Donald Trump has encouraged or provided cover to white nationalists.

“The president’s track record of support for the Jewish people and the State of Israel will probably put him down in history as the most philosemitic president in American history,” Cohanim declared, referencing Trump’s executive order on antisemitism on college campuses, his recognition of Jerusalem as the capital of Israel and the decision to pull out of the 2015 Iran deal. “His track record speaks for itself,” she said, “and those who make those claims against the president are doing so purely for their own political gain.”

She similarly hit back against concerns that Trump has cozied up to Hungary’s Viktor Orban and Poland’s Andrzej Duda, who have both trafficked in antisemitic tropes.

“The president of the United States has relations with leaders all over the world,” she said, “and I will tell you this: so does Prime Minister Benjamin Netanyahu.”

Cohanim emphasized that it is “very well-documented” that antisemitism around the globe emanates from three main sources: the far left, the far right and radical Islam. But she criticized what she sees as the “politicization” of antisemitism, “where some people would have you believe that the only concern that Jews should have is white supremacists. It’s patently false.”

“What is counterproductive for the Jewish people is for any voices that are claiming that there is only one threat source of antisemitism,” she said. “In our office, we don’t rank the sources of antisemitism.”