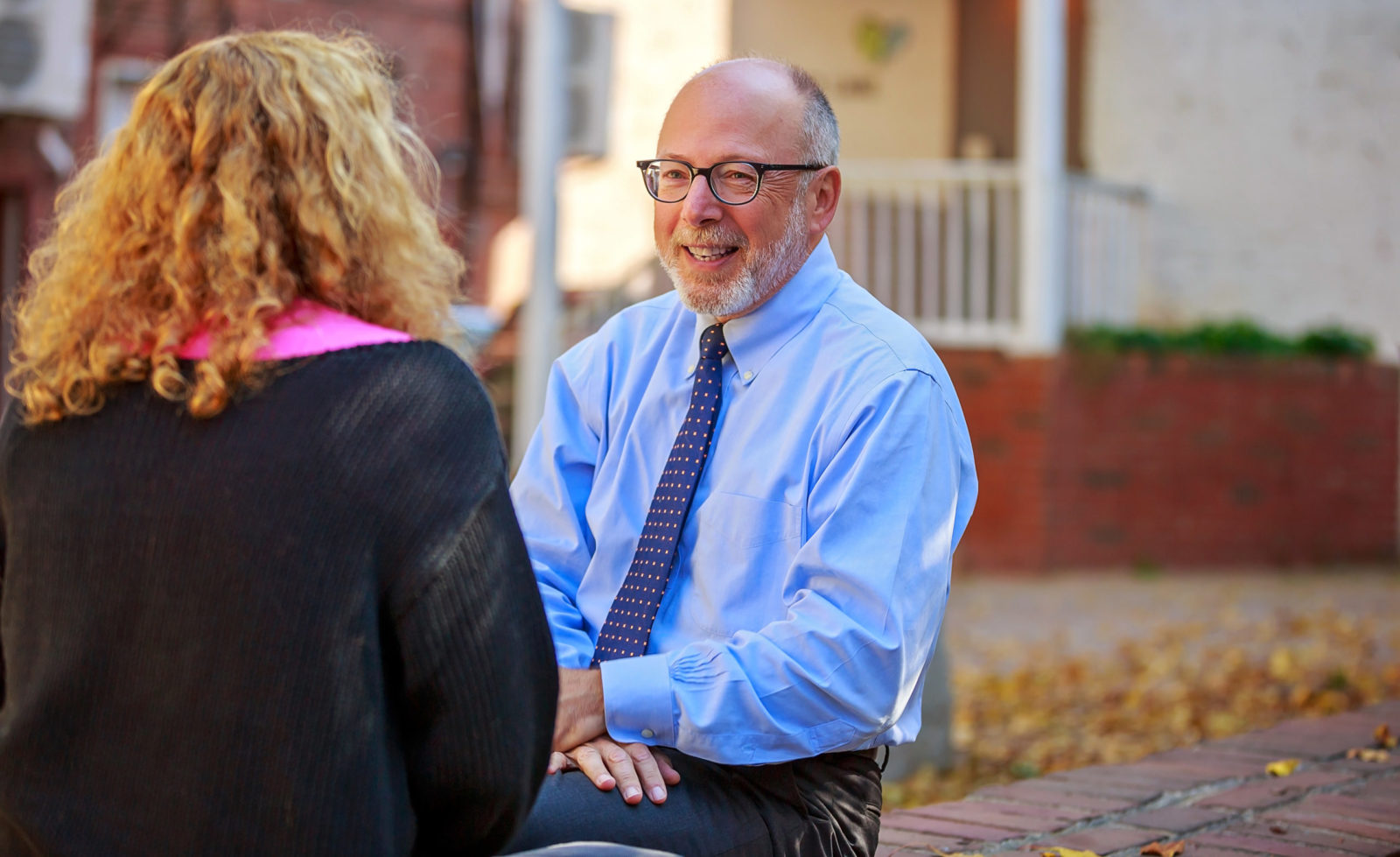 In 1967, 11-year-old Andru Volinsky came in third place in the Bergen County Bible Contest in Fair Lawn, N.J. Though he didn’t win the top prize, the outcome was a milestone for the 6th grader. His parents were not religious but Andru, who attended a local religious school, had been taken under the wing of the rabbi’s wife, who tutored him.

“I got 99 out of 100, which put me in third place because two people got perfect scores,” Volinsky recalled in a recent interview with Jewish Insider. Fast forward 53 years, and Volinsky isn’t going to settle for third place. This time, he’s aiming for first.

Volinsky, who has served as a state executive councilor of New Hampshire since 2016, is competing in the September 8 Democratic gubernatorial primary against New Hampshire Senate Majority Leader Dan Feltes. The winner of the primary will face off against Republican Gov. Chris Sununu, who is running for a third two-year term in the state’s top office.

Though Volinsky’s story begins in New Jersey, he spent his high school years in Levittown, Penn. After graduating from the University of Miami with a BA in psychology, Volinsky returned to Levittown and earned tuition for law school by working as a framing carpenter during the day and a bookstore clerk at night. Following his graduation from The George Washington University Law School in 1980, Volinsky moved to Knoxville, Tenn., with his wife, Amy Goldstein, whom he’d met at a student-run law clinic in Washington. At the clinic, Goldstein represented indigent individuals in small claims court and landlord-tenant cases; Volinsky worked with those who were charged with crimes and couldn’t afford legal assistance.

The couple stayed in Tennessee for several years while Volinsky worked at the University of Tennessee College of Law as a clinical instructor, in addition to his job as a public defender representing defendants facing the death penalty.

Eventually, Volinsky and his family moved to New Hampshire — one of the reasons for the move, he joked to JI, was that his wife couldn’t get used to the southern-accented “Shalom y’all” greetings at their synagogue. Once settled in New Hampshire, Volinsky took up private practice, and he has worked at the Bernstein Shur law firm in Manchester, N.H., since the early 2000s.

He recalled a chance encounter at the office coffee machine in 2016 with Sen. Marco Rubio (R-FL) — who was visiting Bernstein Shur to speak with his senior advisor Jim Merrill, a colleague of Volinsky’s. “We had the most fascinating conversation about the weather, because his handler had warned him who I was and he knew not to discuss politics with me,” Volinsky recalled. “It was actually very amusing how long he went on about the weather in New Hampshire because he didn’t want to talk any substance with me.”

Volinsky’s passion for social justice continued into his professional career.

At the age of 30, he won his first U.S. Supreme Court case, Gray v. Mississippi, persuading the court to overturn a death sentence. A decade later, he was the lead attorney in Claremont School District v. Governor, in which the New Hampshire Supreme Court recognized — for the first time — the constitutional right to a good public education. In 2016, he represented the city of Dover in a lawsuit against the state’s cap on adequacy funds to school districts.

In January, Volinsky traveled to Georgia to witness the execution of Jimmy Meders, a client he had represented through almost 30 years of death sentence appeals. Five hours before Meders was scheduled to die by lethal injection, his sentence was commuted to life in prison without parole. “When people talk about social justice and what it means to them, sitting next to a man who was preparing to die is my social justice,” Volinsky told JI.

Volinsky said his experience as a lawyer and his passion for educational rights is what led him to seek public office. He was first elected to the five-member Executive Council in 2016 and reelected in 2018.

Now, Volinsky is eying the state’s executive branch in order to set the agenda and make good on issues he values. “I am more interested in achieving the change that I think needs to happen, than simply holding the office,” he explained. “COVID-19 has just made our problems more acute.” And he pointed to Sen. Bernie Sanders’s (I-VT) victories in the state in both of his presidential bids as evidence that a progressive can win a Democratic primary and be competitive in the general election.

Volinsky was endorsed by Sanders, who called him a “progressive beacon in New Hampshire,” during a campaign stop ahead of the state’s presidential primary in February. He is one of three gubernatorial candidates nationwide who received the Vermont senator’s backing this year.

In 2016, Volinsky served as Sanders’s counsel in New Hampshire, handling legal challenges and filing paperwork with the Federal Election Commission for the presidential candidate, who at that point was not registered as a Democrat. Sanders ultimately won the New Hampshire Democratic primary that year by 21 points.

On Tuesday, a progressive candidate in neighboring Vermont, Lt. Gov. David Zuckerman, who was also backed by Sanders, won the Democratic primary to take on incumbent Republican Gov. Phil Scott in November.

“This election cycle has made it clear that the fire Senator Sanders sparked on a national level will not fade out,” Zolinsky told JI on Wednesday.

Volinsky said while he was disappointed Sanders didn’t end up the party’s nominee, “I don’t begrudge the fact that he’s now supporting [Joe] Biden. I think we need to all coalesce behind the [former] vice president and move forward to remove the most dangerous president that we’ve probably had in U.S. history.”

Sanders isn’t the only Vermonter backing Volinsky. Speaking to JI, Volinsky touted the endorsements of Ben Cohen and Jerry Greenfield, the co-founders of Ben & Jerry’s, who named an ice cream flavor in his honor: “Volinsky’s Courageous Crunch.”

“The flavor is vanilla-based with little spicy cinnamon hearts and busted up million-dollar chocolate bars because of my campaign finance positions,” Volinsky said. “My kids think that’s the coolest thing that I’ve accomplished so far in this campaign.”

Volinsky said the idea came up last fall after Cohen and Greenfield attended an annual event targeted at progressives in the area. “Ben and Jerry showed up with tubs of ice cream to our house and left behind gallons of Cherry Garcia,” he said, joking that he needed some “extra bike riding” after consuming the leftovers.

Volinsky and his family became involved in the Jewish community in Concord after their move to New England; his wife was previously president of their Reform synagogue, Temple Beth Jacob, as well as co-principal of the congregation’s religious school.

For six years, Volinsky taught a 7th grade Judaica curriculum, with an emphasis on Pirke Avot (Chapters of the Fathers). Goldstein told JI that her husband was a very popular teacher. “His students referred to him as ‘Avo,’ a nickname that he was very proud of,” she said. “I think that at his core he is a teacher — he uses whatever role he is in to teach others what he believes is important, his core values. Andy has always been a strong proponent of Tikkun Olam, and looked to fix what he believed he could to make the world around him a better place. That was true as a litigator, as a father, and as an executive councilor.”

Volinsky said he still remembers walking to synagogue on Saturday mornings in New Jersey by himself because his parents were secular, but after moving to Pennsylvania and finding himself without the same community he had in N.J., he discontinued the Saturday morning walks.

Volinsky, who was a board member and legal counsel to the New Hampshire chapter of the American Civil Liberties Union, told JI that if elected governor he would veto legislation against the Boycott, Divestment and Sanctions movement. To date, 30 states have implemented anti-BDS measures. “I would not support that legislation, although personally I have no hesitation speaking out against the BDS movement,” he said. “I think it’s counterproductive and makes no sense, and would be harmful to Israel.”

A poll released last month by the University of New Hampshire Survey Center showed Feltes and Volinsky with equal statewide name recognition and favorability numbers among Democratic voters. The winner of next month’s primary will have a steep hill to climb in order to emerge victorious in November — Sununu leads both men by 3-1 in a head-to-head matchup in the fall.

The two candidates broke fundraising records, according to the most recent campaign finance reports. While Feltes outraised his competitor by $450,000, Volinsky touted “record-breaking” individual contributions from more than 8,000 donors. “I am proud to stand up for the people of New Hampshire and not bow down to folks who write checks with commas in exchange for political favors.”