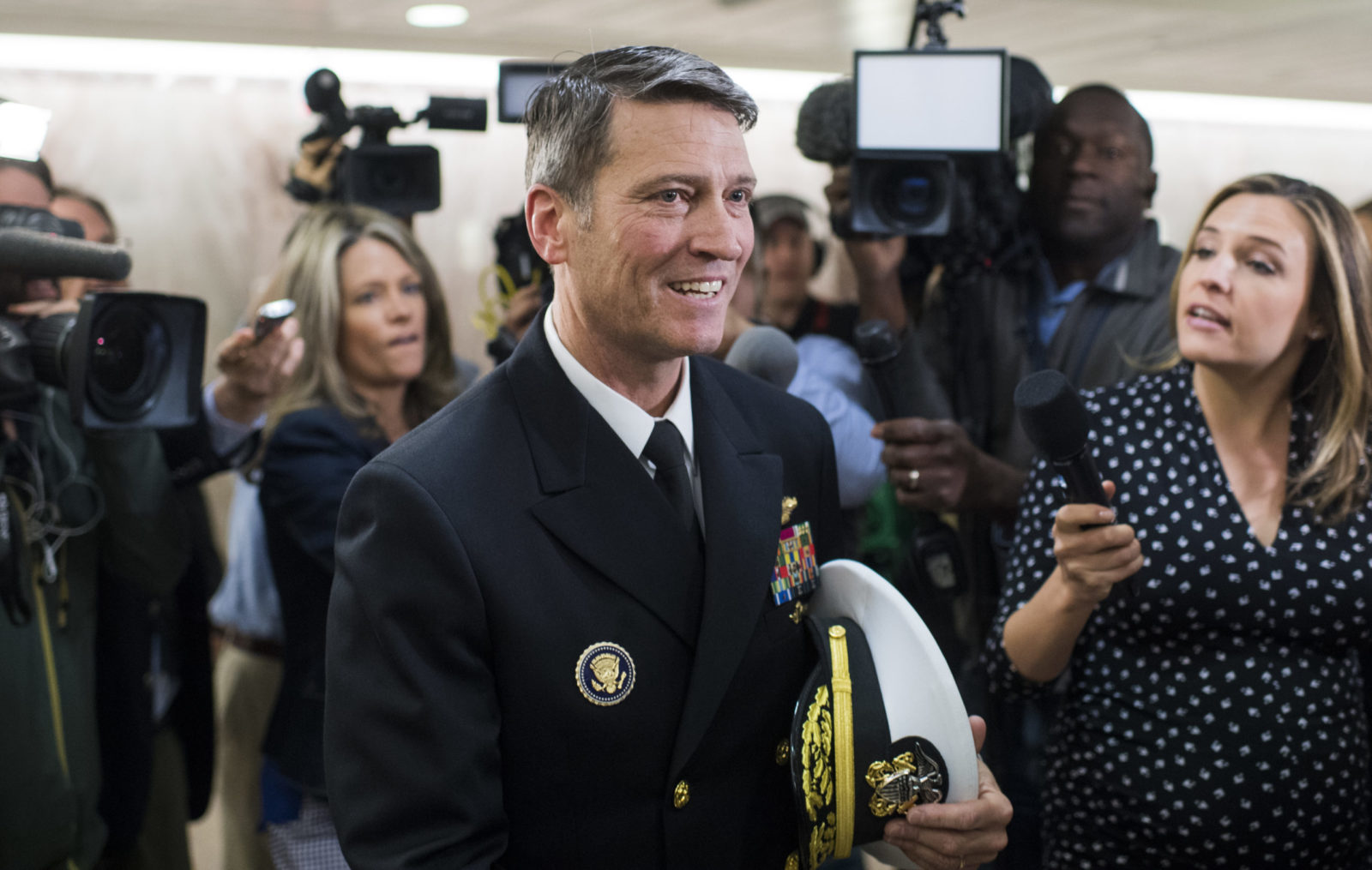 In the country’s most conservative district, Jackson touts his personal relationship with Trump

In competitive Republican primaries across the country, candidates are emphasizing their ties to and support for President Donald Trump. But Dr. Ronny Jackson, who’s competing in a runoff in Texas’s 13th congressional district on Tuesday, has a unique relationship with Trump — one that no other candidate can boast.

Jackson, a retired Navy rear admiral, was the president’s personal White House physician until 2018, and served as Trump’s chief medical advisor for much of 2019.

Jackson has served in successive administrations, previously as President Barack Obama’s personal physician, and as part of the White House Medical Unit under President George W. Bush. But in his run for Congress, Jackson has chosen to highlight his ties to Trump.

“I just came from the White House. I just worked side by side with President Trump every day,” he told Jewish Insider. “He’s got a lot of trust and confidence in me. I know all the Cabinet secretaries… All of these relationships that I have are going to bring a lot of influence and a lot of authority to our district.”

In 2018, Trump nominated Jackson to lead the Department of Veterans Affairs, but the physician withdrew his nomination amid a slew of misconduct accusations, which he has denied.

As a congressional candidate, Jackson has eschewed his service under Obama — he touts his service in the Bush and Trump administrations in his biography on his campaign website, but does not mention Obama by name. He also promoted Trump’s claims that the Obama administration had spied on his campaign. And he has questioned former Vice President Joe Biden’s mental fitness for office.

In Tuesday’s runoff, Jackson faces former cattle industry lobbyist Josh Winegarner, who was the top vote-winner in the March 3 primary. Winegarner led Jackson by nearly 20 points in the crowded race of 15 candidates. Winegarner did not respond to a request for comment.

Despite Winegarner’s lead in the primary, recent polls indicate that Jackson is now ahead. A recent poll by the Club for Growth — which is backing Jackson — showed him up by 8 points.

The two, who are mostly aligned on policy issues, have clashed over their backgrounds. Jackson and his allies, including Donald Trump Jr., attacked Winegarner’s career as a lobbyist and questioned his conservative credentials. Winegarner accused Jackson of running for Congress as a “backup plan” after he lost the chance to lead the VA.

“This [race] was heating up earlier and faster than all the other ones and now it’s really reached a peak in the past couple of days in terms of just how contentious it’s been,” Texas Tribune political correspondent Patrick Svitek told JI. “There’s just a lot of a lot of mud being slung in that race and more so than any other congressional runoff in Texas.”

Despite Jackson’s promising recent polling numbers, the race is still very close, according to Svitek.

“As of a week ago, it was looking like Jackson had a pretty strong advantage,” he said. “However, in the past week or so, it seems the race has tightened… Everyone is continuing to message and fight like it’s a close race.”

Mark Jones, a political science fellow at Rice University’s Baker Institute for Public Policy, had a similar assessment. “The momentum is with Jackson, but I don’t know if it’s enough momentum to put him over the top,” Jones told JI.

Both Svitek and Jones agreed Winegarner’s local roots could provide him with an important boost. However, attacking the military veteran Jackson as a carpetbagger could ultimately hurt Winegarner, Jones added.

The winner of Tuesday’s runoff is virtually guaranteed to become the district’s next representative in Congress. The 13th district is the most conservative congressional district in the country, according to The Cook Political Report’s partisan voting index.

“I’m really sick of what’s going on in our country. I’m just disgusted with the direction this country’s taking with the far left and the liberal press and the way they’re driving things right now,” he told JI when asked why he decided to run for Congress. “I just feel like [we’ve] got to have good strong Republican leaders that will stand up, have an opinion and stick with it, and not be basically pushed around by the left with the political correctness and everything.”

Jackson’s campaign has worked to make Winegarner seem more moderate, according to Jones.

“They’ve been very effective in portraying Winegarner as a moderate establishment candidate, or at least a less conservative option,” he said.

Jackson’s approach in the race primarily involved appeals to Trump, including frequent Fox News appearances, with the hope that Trump’s support would bring district voters to his side, according to Texas Monthly.

Jackson floundered in the early stages of the primary race as Trump and other prominent conservative allies remained uninvolved, The New York Times reported. But Trump endorsed Jackson in May, and the physician has also picked up support from Sens. Lindsey Graham (R-SC) and Josh Hawley (R-MO), as well as former Texas Gov. Rick Perry.

While Jackson trails Winegarner in total fundraising — he’s raised $900,000 to Winegarner’s $1 million — he outraised Winegarner in the second quarter by more than $200,000.

Prior to joining the White House Medical Unit under Bush, Jackson was deployed to Iraq in an emergency medicine role. His son and daughter-in-law are also currently active-duty members of the military. This personal experience, he says, has helped shape his views on U.S. military engagement abroad.

“I don’t think that we need to get involved in every issue that comes down the pike,” he continued. “And if we do, we need to make sure that we have really effective exit strategies.”

During his military service, Jackson spent time in Israel alongside members of the IDF, and also visited the country with members of the Trump administration, including the president and senior advisor Jared Kushner.

Jackson said he favors a two-state solution for the region and supports the president’s Mideast peace plan, but expressed skepticism that any peace proposal is viable under the current circumstances.

“There’s been proposals out there from the Israelis on multiple occasions that I thought probably were great proposals that the Palestinian side of the house have not taken them up on, so I don’t know if there’s still room for a two-state proposal at this point,” he said.

”I think that the Israelis have to make sure they protect all the occupied areas that they have right now, and don’t give up any of the areas that are occupied right now in the negotiations or whatever that peace policy looks like,” he added.

Jackson said he’s opposed to restoring aid to the Palestinian Authority, which he said sponsors terrorism, and condemned calls to condition aid to Israel.

He also criticized the 2015 Iran deal as only helping Iran to “destroy our country.”

“Anything we can do to unseat that government, we should be working to do,” he said.

Within the U.S., Jackson said that he sees antisemitism as primarily a product of the far left, including coming from members of Congress like Rep. Ilhan Omar (D-MN), adding that the antisemitic factions of the far right are “a very tiny group of people now.”

Although coronavirus cases in Texas are surging and Houston hospitals are overwhelmed with patients who have contracted the illness, Jackson is sticking close to the president’s approach on the virus. He accused “the left” of stoking fear about COVID-19 to hurt Trump’s reelection prospects.

“It started taking on a real political tone that I don’t think was good for any of us,” he said. “They’re using [rising case numbers] to try to maintain a certain level of fear in this country to keep the economy down.”

Jackson also supported the Trump administration’s argument that new coronavirus case numbers are misleading because testing is increasing, a line of reasoning that has been disputed by other experts. The physician seemed unconcerned by Trump’s criticisms of public health officials and calls for less testing.

Jackson said that he would have advised the president to give his economic advisors more influence in the coronavirus response.

“I think that the president’s done the right thing and backed off of letting the medical taskforce kind of drive the train on this,” he said. If Jackson was still in the administration, he said, “I probably would have been advising him to back down from some of the recommendations from the medical task force and start putting the focus on the economic task force even earlier.”

While the coronavirus pandemic is unlikely to have much of an impact on who will win the runoff, Jackson’s status as a former White House doctor — and support from the president — will no doubt win him votes, though it remains to be seen if it will be enough to launch him to victory.