DNC advances the 2020 platform, including a pro-Israel plank, by unanimous consent

‘We support a negotiated two-state solution that ensures Israel’s future as a Jewish and democratic state with recognized borders and upholds the right of Palestinians to live in freedom and security in a viable state of their own,’ the platform’s Israel plank states 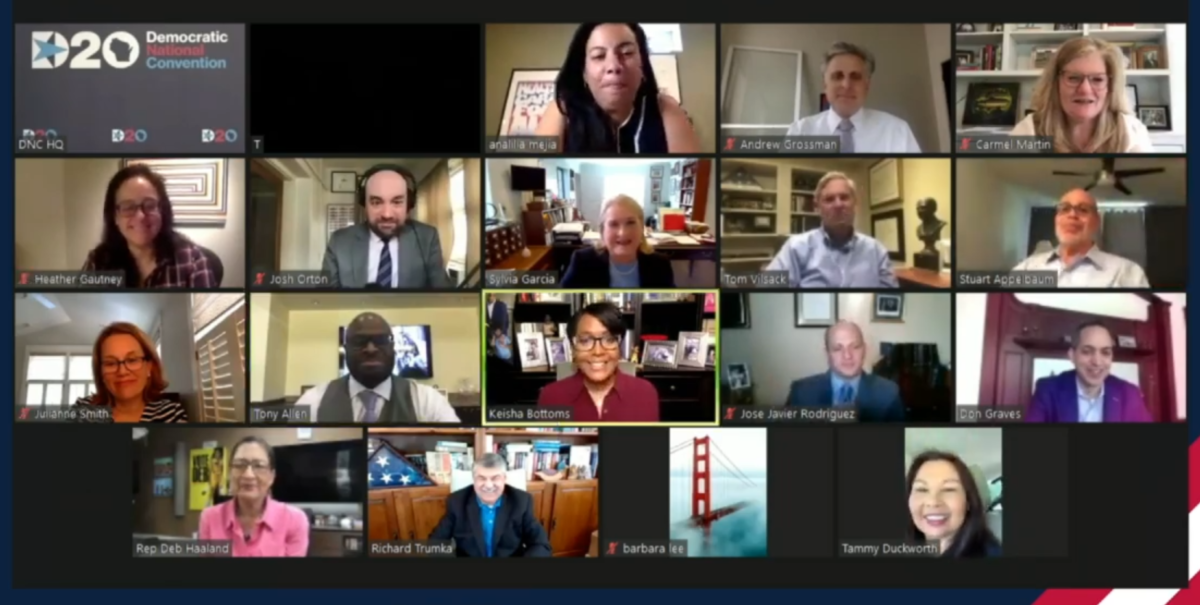 The Democratic National Committee advanced the party’s 2020 platform following a vote by members of the drafting committee to approve the language during a virtual meeting on Wednesday.

Josh Orton, a senior advisor for Sen. Bernie Sanders (I-VT) and one of 15 members of the panel, was hopeful that wording referencing ‘occupation’ and support for Palestinian rights would be added in the final draft ahead of the July 27 vote by the full 187-member platform committee.

The platform’s Israel plank — a draft of which was obtained by Jewish Insider on Wednesday — includes language that expresses support for the U.S.-Israel alliance, a commitment to security funding for Israel and support for the two-state solution “that ensures Israel’s future as a Jewish and democratic state with recognized borders and upholds the right of Palestinians to live in freedom and security in a viable state of their own.” The platform also notes opposition to “unilateral steps by either side — including annexation — that undermine prospects for two states” and opposition to “settlement expansion.”

An individual with knowledge of the internal process told JI that while the committee discussed including a reference to ‘occupation’ — a proposal backed by Sanders allies and J Street — the panel drafted language that more closely mirrors the views expressed by the Biden campaign in recent weeks.

“Ending the occupation is an issue of racial justice, and at a time when hundreds of thousands of Americans have been marching in our streets for equality and civil rights, it is absolutely necessary for the Democratic Party to speak truthfully to the policy efforts to secure those same rights [to the Palestinian people],” Orton, who noted his Jewish heritage and support for Israel’s security, told the committee. “Democrats supports a negotiated two-state solution, and I’m pleased that the platform supports Palestinian rights to a state of their own. I’m proud of the progress this committee has made and truly believe this platform lays out the most progressive vision of America in all of our lifetimes. I very much look forward to working with the platform committee at the next stage to continue this important conversation on foreign policy, and the discussion to recognize the rights of all people.”

On the issue of Jerusalem, the Israel plank states, “We believe that while Jerusalem is a matter for final status negotiations, it should remain the capital of Israel, an undivided city accessible to people of all faiths.” The language expresses opposition to “any effort to unfairly single out and delegitimize Israel, including at the United Nations or through the Boycott, Divestment, and Sanctions Movement, while protecting the constitutional right of our citizens to free speech.”

Julianne Smith, who served as Biden’s deputy national security advisor from 2012 to 2013, said she was pleased to see Democratic unity on the Israeli-Palestinian issue in the platform. “I think that the platform language truly reflects the views of our party and I think it’s perfectly in line with Vice President Biden’s own convictions,” Smith said. “I also think that our commitment to Israel’s security, it’s right to defend itself and to our alliance ought to remain absolutely ironclad, but so too should our commitment to help bring this conflict — which has caused so much pain to so many — to an end.”

A J Street spokesperson told JI that the group was “very pleased” to see the platform articulately “expressing support for Palestinian rights alongside affirmation of support for Israel’s security, and opposition to settlement expansion and unilateral annexation.” At the same time, J Street said, “we’re very concerned that the draft apparently makes no reference to Israel’s ongoing occupation of Palestinian territory. Until the Trump administration, it has been bipartisan U.S. government policy to recognize (and oppose) the occupation since it began in 1967. It should not be at all controversial for the Democratic party to recognize it in 2020.”

J Street said it will continue to advocate for the inclusion of the word ‘occupation’ before the platform is approved by the full committee.

The DNC did not immediately respond to a request for comment.